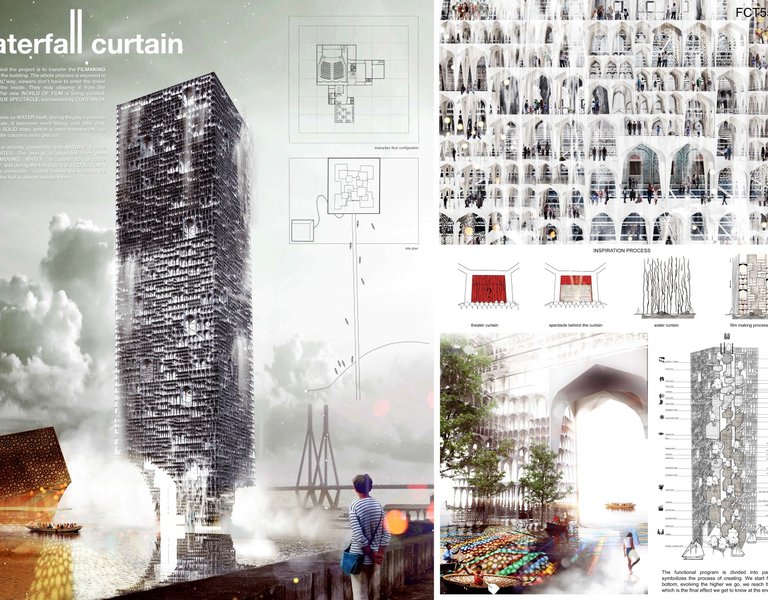 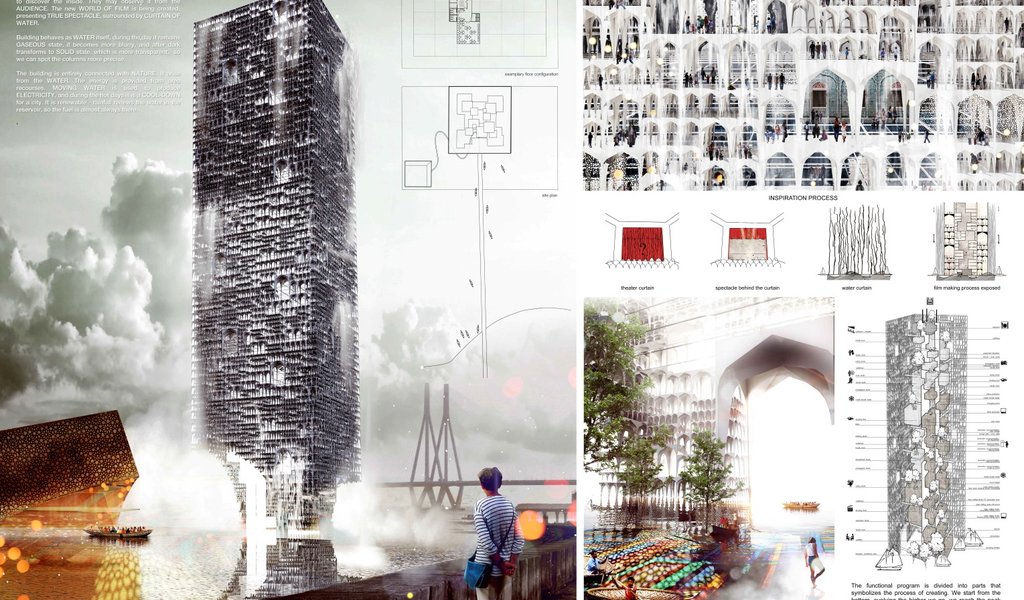 Three students of architecture at the Poznan University of Technology have won the opportunity to design a film city in Mumbai as part of the “Film City Tower | Mumbai: Bollywood Re-Imagined” competition.

The project by Jagoda Nowakowska, Monika Woźniak and Magdalena Skop called “Waterfall curtain” delights with its inventiveness and modernity. Instead of constructing a one-storey complex of buildings on a vast area, the final-year students of the Faculty of Architecture at the Poznan University of Technology opted for soaring and space-saving structures. Their film city is to be located in a glass tower whose individual levels will be used for various stages of film production. But that is not all – this 200-meter condensed temple of filmmaking will also include a film museum and a film school, whose students will not have to go far to reach workshops. They will also be able to watch professionals at work.

Beside functionality, an important advantage of the skyscraper is its aesthetic appeal. The Poles based its construction on ogee arches, which are an important element in Indian architecture. The arch, with its S-shaped arms and sharp and slender peak, is appreciated for its decorative value and has been used in Indian buildings for centuries. As the designers note, it will be possible for people to walk on the arches and watch filmmakers in action. Another reference to Indian architecture and an attraction for visitors will be a filmmaking museum, which at the same time will be an open stage on the water.

The glass building seems a bit blurred. It owes this ephemeral shape to water running down the façade creating the title “Waterfall curtain” – the designers wanted it to look like a waterfall. But the flowing water will also have a functional value – it will drive turbines generating electricity. It will also be used to cool the building, so as to make it possible to save on air conditioning, which is usually a sizeable expense in such a hot climate.

“The water refers to the place where the building is to stand – to the bay, and the water curtain to a theatre play. When the water is not flowing, the curtain comes down and through the transparency of the construction we show what is happening inside,” explained Jagoda Nowakowska in an interview with WTK television. The young architects did not count on winning and decided to give full play to fantasy. “Maybe this building is unconventional, but we wanted it this way. It was important for us to move away from the typical concept of a glass high-rise,” adds Nowakowska.

The design by Nowakowska, Wożniak and Skop met all the requirements of the international architectural competition “Film City Tower | Mumbai: Bollywood Re-Imagined.” The jury thought it suitable as an icon of the city and the Indian film industry, as well as the use of alternative energy sources and green technologies. That is why out of 283 works submitted by design teams from around the world they chose the film city model created by Poles.

The film industry of India is one of the most powerful in the world. Every year, more than 1,500 Indian films are created, generating more income from sold tickets than those by Hollywood productions.

According to critics, the victory of Polish women in the competition is a huge success: “The design looks impressive and clearly refers to the regional architecture, thus fitting in within the city context,” says Marcin Szczelina, architecture critic, co-author of the blog Architecture Snob and author of books on architecture, who spent more than a month conducting intensive research on Mumbai's architecture, in his conversation with Poland.pl. The only thing that I am not convinced about is the turbines generating electricity, as I think that this is too utopian, but on the other hand, the advantage of such a façade is the fact that it will clear the air and the building from smog.”