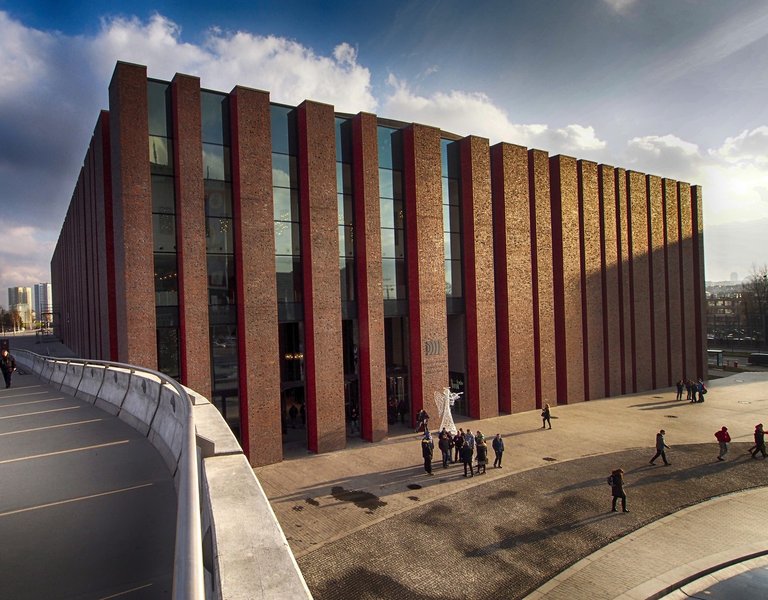 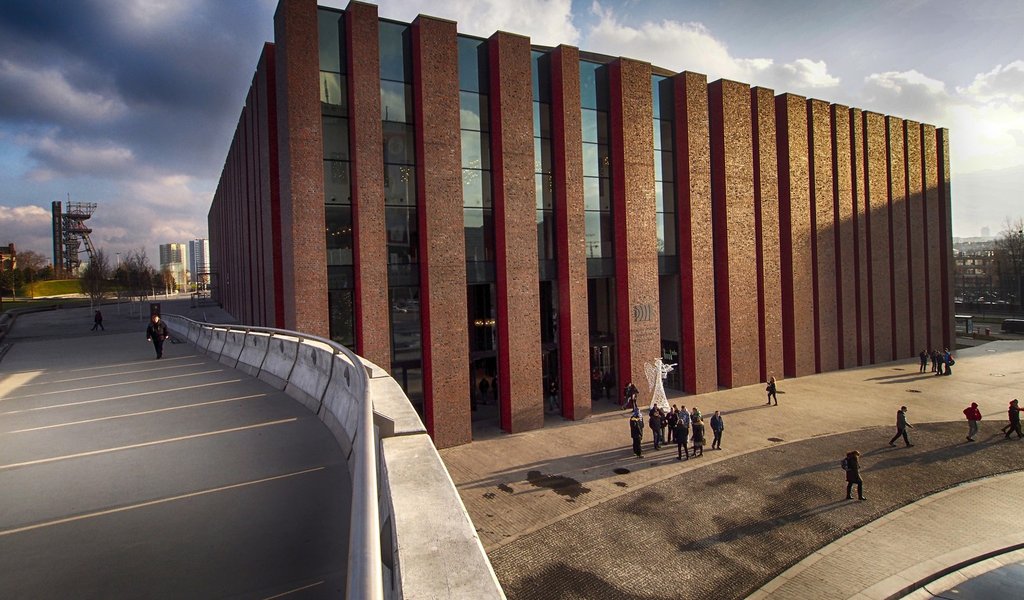 Modernity in the Silesian brick

The new home of the Polish Radio National Symphony Orchestra in Katowice is located in one of the most modern philharmonic buildings in the world.

“I would like a building to have its own history, spatial narration deriving from the culture of such a region as Silesia,” Tomasz Konior, the world-famous architect, who in 2008 was entrusted with designing a new home for the Polish Radio National Symphony Orchestra (NOSPR), said just before the commencement of construction works. Some critics believe that his work is too intertwined with the tradition of Katowice. The object, erected at Wojciech Kilar square in the vicinity of the renowned Spodek arena, is in their view far too barren. They criticize the façade made of red brick fired in a 19th century furnace and reflecting a character of the nearby working class neighbourhood of Nikiszowiec. 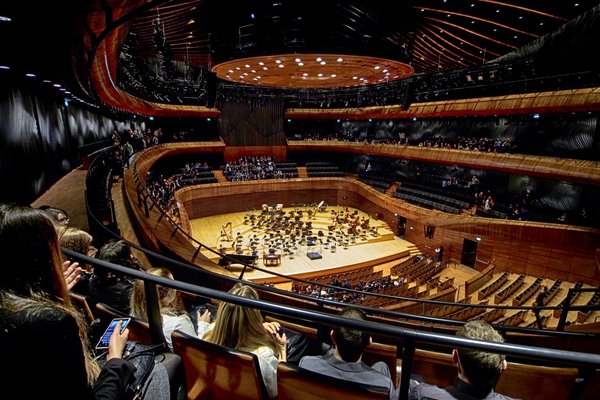 “The building fits well into the context of Katowice but it is difficult to love it as it does not astonish everyone who looks at it. However, critics seem to forget that even the most advanced technology will age with time and brick, which is timeless, will always look good, especially here,” Tomasz Malkowski and Marcin Szczelina tell Polska.pl. Messrs Malkowski and Szczelina are critics from Architecture Snob and authors of a book titled Dotknąć muzyki (Touching Music), describing the new home of NOPR based on opinions by the most significant world architecture figures.

Szczelina and Malkowski notice that a slightly conservative facade hides one of the most modern interiors in the world: “A large concert hall for 1,800 people, the heart of the space which is covered from the outside with formworks of concrete. When touching their structure you can feel prints left by wooden beams. But the interior stuns the viewer with its modernity and cutting edge solutions, thanks to which musicians can be observed from behind because the seats are also placed on the other side of the stage,” they explain.

Tomasz Konior divided the building into three zones. The first one constitutes a ring for NOSPR musicians and employees, with a music hall for 300 people, library, room for section rehearsals, dressing rooms, offices, and technical facilities.

The second zone comprises an atrium for guests with cloakrooms, ticket offices, a bistro and restaurant; and the concert hall constitutes the third and the most important zone. It is made of black, wavy concrete reflecting sounds just like wooden elements and denoting the colouring of the Stradivarius violin. The parquet is made of light oak, the ceiling and plafond of birch, and balcony railings of birch plywood. What is interesting is that the podium’s flooring is made of Alaskan cedar wood imported from Canada.

But what is the most ravishing in the concert hall is its great acoustics, attributable to sound engineers from the Japanese company Nagata Acoustics. The Japanese are responsible for the acoustics of the largest concert halls in the world (recently Walt Disney Concert Hall in Los Angeles, which hosts the Oscars ceremony, or the New National Theater in Tokyo). The hall was personally attuned by the director of Nagata Acoustics, Yasushi Toyota. Not without significance was the recommendation of Krystian Zimerman, the winner of the 1975 Chopin Competition. Zimerman, who visited Katowice in the autumn to rehearse before the opening concert did not hide his admiration for the work of Toyota. The architects ensure that the hall’s excellent acoustics will be even better after several months when the wood inlaid in the hall starts working.

The advantages of the new NOSPR’s room were also appreciated by critics asked about their reviews for the book Dotknąć muzyki by Tomasz Malkowski and Marcin Szczelina from Architecture Snob. Their opinions are surprisingly similar although Joseph Rykwert, Professor Emeritus of Architecture at the University of Pennsylvania, Aaron Betsky, director of the Cincinnati Art Museum in the US, Silesian writer Szczepan Twardoch and art director of NOSPR Alexander Liebreich can be expected to have different opinions.

“When we invited them to cooperate we were not sure whether the reviews would be favourable. For all of them are well known for their sharp tongue,” say Messrs Szczelina and Malkowski. 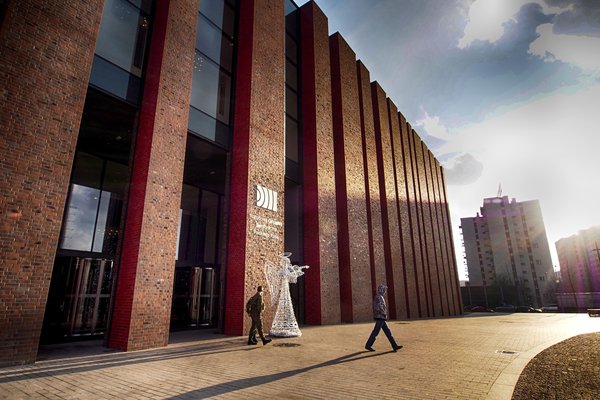 The new hall is supposed to attract the youngest. NOSPR directors hope that technological solutions will promote classical music among the generation that is now entering adulthood, which often, contrary to their parents, did not have mandatory music lessons at primary school. The need to teach young Poles about classical music was also observed by the Institute of Music and Dance, which in 2014 in three Polish cities – Lublin, Rzeszow and Bialystok – implemented a programme for high school graduates “Philharmonic. Caution, It Draws You In!!!” Under the program, high school students received free tickets for 20 concerts that presented them with the arcana of the conductor’s work and specific nature of the philharmonic orchestra.

NOSPR is not the only new public utility facility that was built in 2014 in Katowice. The building creates a so-called cultural axis with the new Silesian Museum and International Congress Center. The Silesian Museum building, designed by the Austrian study Riegler Riewe Architekten of Graz and constructed by Budimex SA and Ferrovial Agroman on the site of the former mine Katowice, is ready from February 2014. Although the opening of the NOSPR’s new home is planned for 26 June 2015, its brave design may be admired today. It assumes a maximum use of underground space and slight interference with the post-industrial landscape, with glazed sections blending with it, thus allowing the exposition to be admired in daylight.

In the vicinity of the NOSPR, on the other side of Olimpijska Street, the last finishing touches are being given to the International Congress Center with a capacity for 12,000 people, which was designed by the Warsaw study JEMS Architekci. The building in the form of a dark cuboid is covered by a green roof, which descends along with a green valley dividing the building in two parts. The interiors comprise the main lobby, banquet and multifunctional room, auditorium and 18 smaller conference rooms.