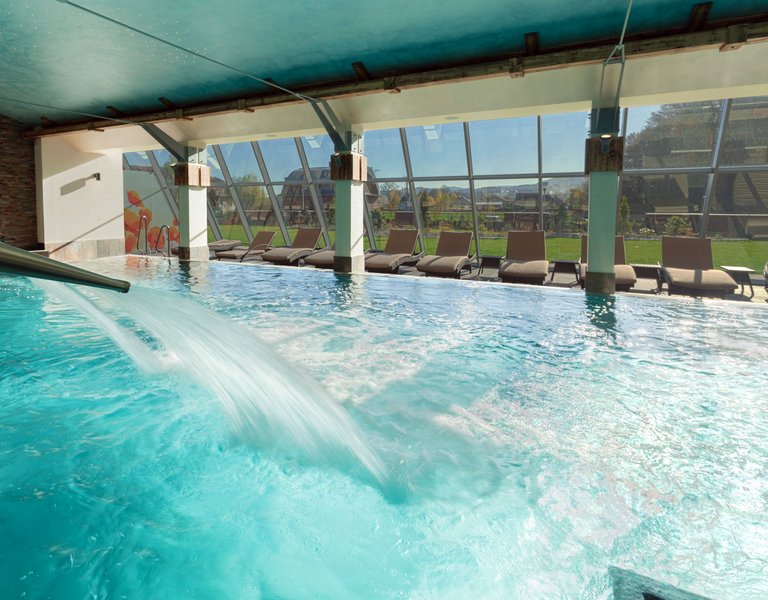 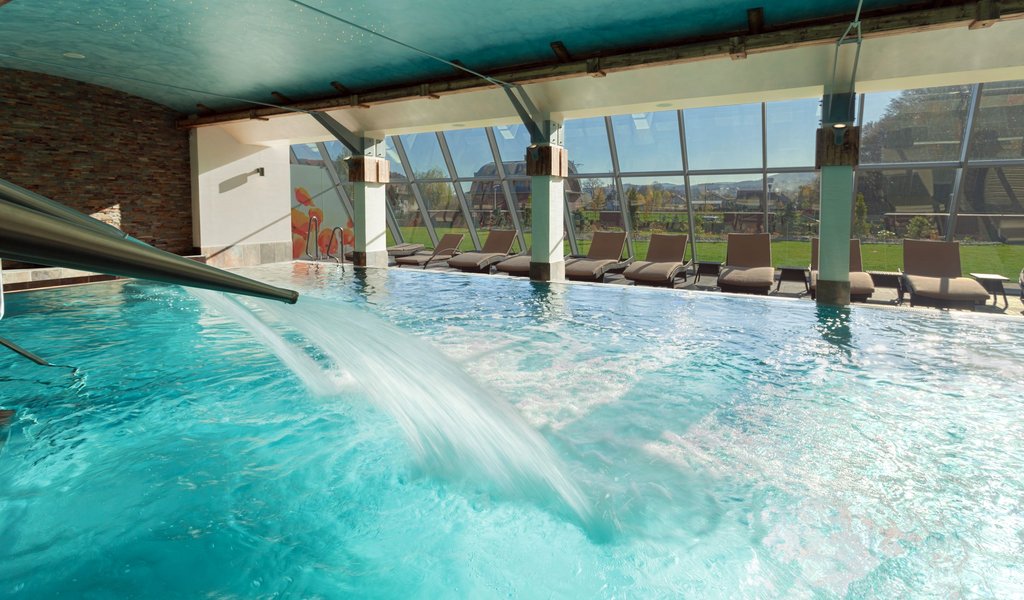 Health and beauty spas outside the city

Poles have come to love spas in places outside the city and surrounded by nature, locations which 200 years ago were reserved for those of noble birth. Here, they are organising conferences, weddings, baptisms, and family meetings.

Health and beauty treatments centres are being built in 19th century palaces, old mills and on the premises of former state-owned collective farms. They combine four and five-star hotel standards with a pastoral environment and countryside attractions. And the treatments which they offer in boutique spas, using cosmetics made of local herbs, vegetables and fruit, are just as good as the ones in the capital.

Here are a couple of examples:

Aristocratic anointment at the Chojnata Palace

The owners tempt us with their catchy slogan: “Are you a nobleman? Do you want to feel like an aristocrat? Then visit us!”

And it is not far away for the modern aristocrat, because the town where the palace is (Wola Chojnata) lies just 60km from Warsaw and 80km from Lodz. Situated in the Lodz Province, in historical Masovia, close to Biala Rawska, and removed from big city noise, it guarantees relaxation among pristine fauna and flora. 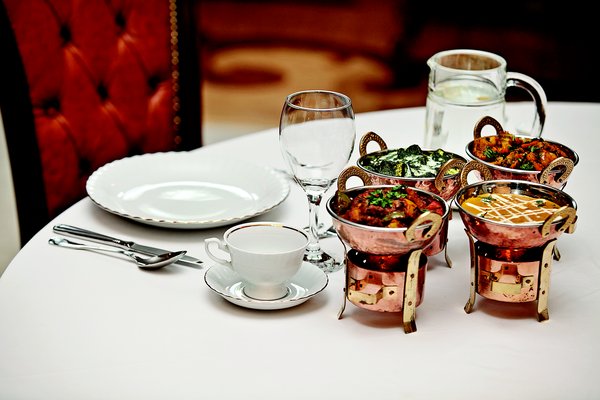 We can also partake in sauna rituals—along with a fruit aromatherapy known as “Morning Breeze” and “Bringing Strength,” which clears our airways thanks to the mixture with a tinge of eucalyptus in it, and a fruit mix that enhances our immune system. A “ritual for two” is also available.

All of this set in a Neo-Renaissance interior with Ionic and Corinthian pilasters, tile furnaces and stylish furniture from the era. After the treatments, we can rest in a park with old trees—among 21 types, deciduous trees are the most common, e.g. planes and red oaks, and lilacs and mock oranges among the shrubs.

And yet, 14 years ago the Chojnata Palace was in ruins, and the park surrounding it did not at all resemble today’s charming English-styled garden, with carefully trimmed flower beds and tidy alleys.

The Neo-Renaissance palace with its modern shape given to it by the Marconi brothers in 1873, has a particularly stormy history. At first, it did not tickle the fancy of the estate owner’s Parisian wife, who returned to Paris after six years in Masovia. Then, the palace became the place of Masonic lodge meetings. Even though it survived two wars, a clash with Communism was too much for the building to handle—the palace served as, among other things, a primary school. After the agricultural reform in 1945, it became the property of the Treasury and kept withering away for many years. In 1995, the building was bought by Krzysztof Malarecki, a businessman and social activist, who renovated the old heritage site.

Apples and sheikhs in Sielanka

The history of the hotel in Sielanka nad Pilica goes back to the 1990s, when Mr and Mrs Waga bought the land which used to be a state-owned collective farm (PGR) on the outskirts of Warka, located 51km from Warsaw in the Grojec district. On the grounds of the former PGR, the couple set out to create a perfect equestrian centre. The centre quickly became recognised as one of the best in the country, and at the beginning of the century horse riding competitions started being organised there.

It became apparent a place to stay for the night was needed. In 2004, a pension was built with 28 rooms and a small restaurant. It quickly turned out that horse riding aficionados came to the area to relax as well. In 2007, the charming atmosphere of the hotel received praise from the most important people in the riding world, who came there for the World Carriage Driving Championships. In the town near Grojec, we could see Arab sheikhs, British aristocrats and American carriage-driving masters.

Today, Sielanka is situated between the clear Pilica River and a wall of the Stromecka Forest. It is a four-star hotel with 60 rooms arranged in a simple, refined style; a restaurant, stables, a virgin forest, and large swathes of green land and fields, all of which are great for Nordic walking and bicycle rides.

Petit Spa with its shower of sensations, Finnish sauna, steam room, jacuzzi and a swimming pool offers treatments inspired by Eastern medicine, but also local natural treasures. The “Sielanka Ritual” is based on cosmetics produced from the local fruit of the earth, namely apples.

Sielanka is not just for those tired of big city noise, horse lovers and families with small children. Football fans will find Sielanka a good place to rest, too. In 2012, the European Football Association (UEFA) recommended the resort as its base for the duration of EURO 2012 Football Championships.

Eastern rituals at the place of insurgents’ gathering

The calming shiatsu massage, amma, or acupuncture without needles, samurai massage with bamboo brushes, are waiting for guests of the Dwor Kombornia hotel and spa in the Podkarpacie Province. Those longing for relaxation can choose between Thai and Ayurvedic rituals and treatments, all that in a 15-room mansion with history dating back all the way to the 16th century.

Located just 9km from Krosno and 900 metres from the Rzeszow-Barwinek national road, believed to be leading to the most beautiful Polish mountains, Bieszczady, Kombornia Mansion lets us take a break from civilisation, from which we can quickly return to life and work.

The interior of the Kombornia Mansion, which was built in the 16th century as a defence mansion with a moat that today turned into ponds and earthworks, is an eye-pleasing view for aestheticians and history lovers. Kombornia appears in documents only in the 18th century, in a purchase deed by Adam Urbański from 1756. This is where, at Feliks Urbański’s mansion, a gathering of Wielkopolska insurgents against the partitioners took place in 1846.

Situated on a small hill, with a special parade causeway, the mansion does not look like a fortress anymore, but it still delights guests with its remaining classical polychromes in the ballroom and classical fireplaces made of sandstone. The park is filled with nature monuments, mainly oaks. In the spring, the park is carpeted with windflowers.

It is practically a miracle that the mansion has been restored to its former glory. After the Galicia massacre, or a peasant revolt in Western Galicia in the second half of February and in March of 1846, and the plundering of the mansion by the peasants, the new owners restored it to its former state. A hundred years later, more damage followed when Soviet soldiers made bonfires inside the building.

The mansion was a scene of dramatic events in the Second World War. On 7 November and 8 December 1943, and on 1 July 1944, the German police shot dead 36 Kombornia inhabitants.

A Silver Bell in a Prussian school

The owners of the Srebrny Dzwon (Silver Bell) hotel and spa in Kadyny, Varmia region, praise it as a charming place surrounded by water and forests, where energy has a calming effect on body and soul. Indeed, anyone who ran away from tourist-crowded, noise-infested Masuria will be delighted by the village on the Vistula Lagoon.

We can rest here in the woods of Elblag Upland Scenic Park and Kadynski Las Reserve, marvel at sailing ships moored at Zegluga Gdanska harbour. If we miss a big city, we can drive to Elblag 23km away.

Kadyny, situated on the site of a former old medieval village belonging to a tribe of old Prussian Pogezan, who were conquered by Teutonic Knights, in the 13th century got enriched by a defensive Teutonic mansion, and in the 18th century by a Franciscan monastery. At the turn of the 19th century, the village became Emperor Wilhelm II’s property, a fact which helped it flourish. Apart from the emperor’s estate, Kadyny hosted a manufacture that produced majolica—pottery coated with an opaque richly-coloured lead-tin mixture. In 1903-1905, a school was built there, which today serves as the Srebrny Dzwon hotel and spa.

A brick building with green shutters and stairs presents itself best in the summer, decorated by pelargoniums. A homely cube hides a modern, refined 27-room interior, a beautiful swimming pool and a spa. The spa offers its customers some interesting treatments, e.g. Princess Kadyna Packet, named after a Prussian princess and the legendary founder of Kadyna. The packet includes a coconut body peeling, a holistic massage with warm stones, acupressure foot massage and a face treatment.

After the treatments we may visit the beach or just sightsee, for instance by taking a Kolej Nadzalewowa train, a bayside railway which its German designers intended to connect Elblag with Krolewiec (then Königsberg).

A bath in milk at Jack’s Mill

Wine, milk, mud and herbal mix are just a portion of what the spa has to offer at Młyn Jacka (Jack’s Mill), a four-star hotel near Wadowice. The resort also offers a beer and wine therapy. All of that in an interesting interior of the old brick mill, which fits perfectly with glass parts. 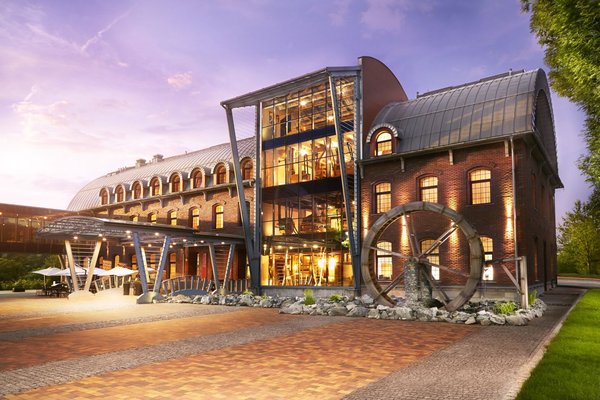 The hotel, deemed best in the region, is located in Jaroszowice on the Skawa River. The town is a wonderful base for further escapades to Wadowice, the birthplace of John Paul II, and to the mountains—nearby Beskid Mały, or the Tatra mountains above Zakopane.

A rich, colourful history only adds to the overall charm while we relax at the period hotel. When at the turn of the 19th century, a Polish Army Reserves Captain Franciszek Foltin (also known as Fołtyn) won a million bricks in cards, his first thought was to build a printing house. Eventually, he built a factory producing shoe studs and conductive pipes. He used Mlynowka, a river flowing behind the plant, to power a sawmill built on the site.

The mill was put into operation in the 1920s, and the owners equipped it with a steam engine, which powered both the mill and the sawmill.

The building survived two wars and the owners assert each and every of its million bricks could tell a different tale, for example that of stealing the machines away one by one. In 1945, a son of pre-war owners and his former employee decided to restore the building to life. They connected the building to the power line and over the next forty years, farmers from the area ground their corn there. At the end of the 1980s, the business went belly-up, though.

It seemed as though the mill’s life ended in the early 1990s. In 2004, the abandoned building with its dusted machines and smashed windows was bought by local entrepreneurs, Jacek Świętosławski among them. The 67-room, four-star hotel bears the entrepreneur’s name.