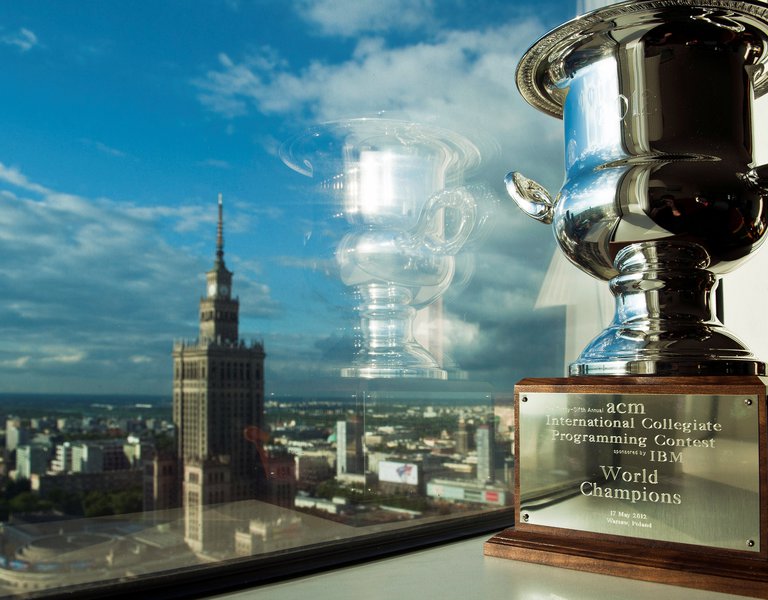 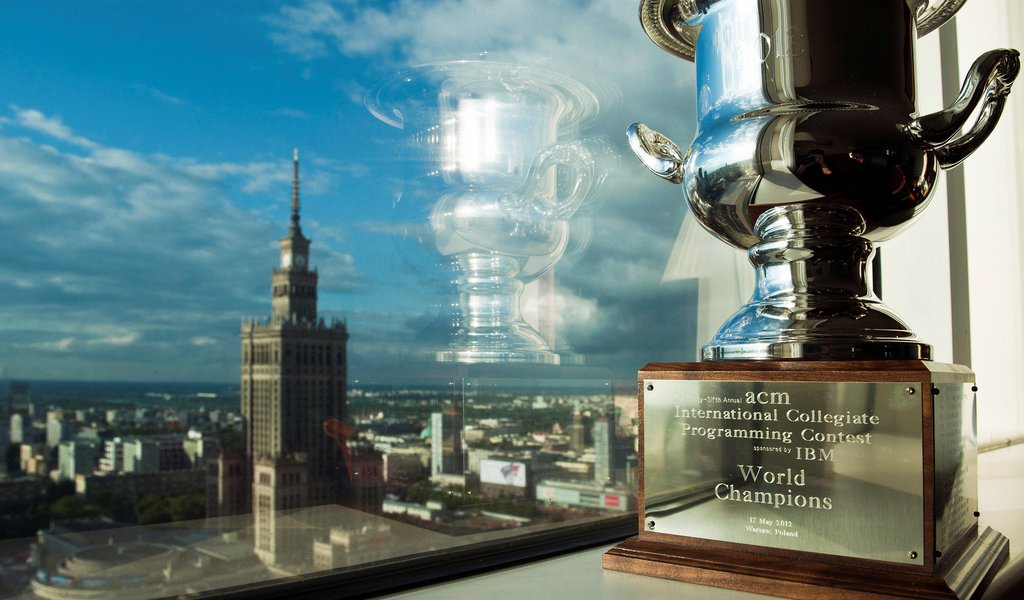 When in 2003 in Beverly Hills Polish IT students from Warsaw University won their first World Finals of the International Collegiate Programming Contest (ICPC), American journalists began scanning the U.S. map for a town called Warsaw. After a while, they discovered that they are dealing with a city in Europe – in Poland, to be precise. To their surprise, the winners came from outside the United States.

Today there is not a single journalist in the United States – the cradle of IT – who would not be aware of where Warsaw University lies. For 20 straight years, its students have been taking part in the World Finals of the International Collegiate Programming Contest and have won the event on two separate occasions (the second win coming in 2007 in Tokyo). The only other team with an equally long final streak comes from the University of Waterloo, Canada.

“I remember that during the award ceremony we sat in the last row. When we were declared the winners, we had to traverse the entire hall, so there was plenty of time for the other guests to acquaint themselves with us, and for us to lap up the applause,” reminisces Jan Madey, a professor at Warsaw University’s Faculty of Mathematics, Informatics and Mechanics. That Polish team had a lot to be proud of, since in the final round they simply blew away the competition. “Our team was the only one which solved the most difficult problem, which involved an integrated circuit with a imprinted fractal through which a current was meant to pass in the fastest possible way – exactly as the task’s author had designed it. The professor who came up with the problem worked on it for two years and when we submitted our response, he literally began jumping with joy,” Professor Madey added. 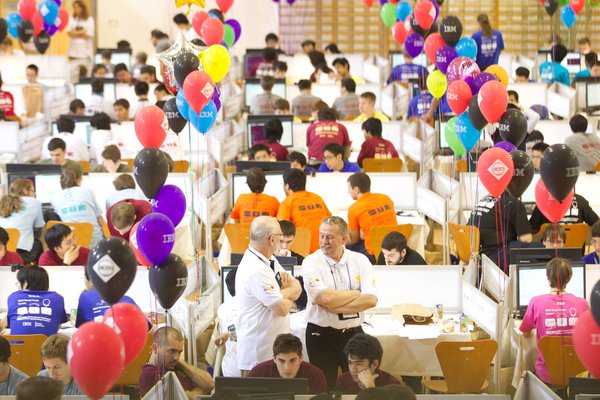 So how come programming has become a Polish speciality? “We offer a very good development path for especially gifted children and youths,” Professor Jan Madey said. “There is the National Children’s Fund, which provides assistance to over 500 young people every year. The laureates do not receive money, but are instead given scientific assistance. Most of the participants of the Programming Contest profited from the assistance given by this organization Furthermore, we also have good schools and subject-specific Olympiads in the field of mathematics and IT. The knowledge and diligence acquired during these event are like an internal motor which drives people to want to be successful – all this leads to Poles winning the World Finals,” the Professor commented.

Andrzej Gąsienica-Samek was a member of the World Final-winning team in 2003. He had been taking part in IT competitions and Olympiads since primary school. “To win, the team of three participants must not only be made up of good programmers, but first and foremost must be able to communicate and know each others’ strengths and weaknesses,” Gąsienica-Samek said. Warsaw Univeristy’s Bartosz Klin, PhD – a World Finals participant in 1997 and 1999 – adds, “The most difficult bit is learning to correct the errors and finding them in your friends code.” Preparations in the run-up to the competition last one whole year. During their daily, five-hour training sessions, the three-person teams of programmers analyze thousands of complex problems.

In 2003, when the team from Poland won the World Finals for the first time and Americans began searching for the town of Warsaw on their country’s map, the team from the United States came 13th.

During the first few minutes of the World Finals of the International Collegiate Programming Contest the silence is quite unlike anything else you may experience. The competitors are so intensely focused on reading the problem descriptions that you can almost hear the buzzing of their neurons. Then, suddenly, the sound of typing fills the auditorium.

Problems in the World Finals of the International Collegiate Programming Contest are grouped according to difficulty. For example, participants must plan an aircraft’s journey so that it burns the least possible amount of fuel, or assess whether it is possible to bring a given game of solitaire to its end. “One particularly difficult problem concerned a sheet of metal and a variable-length knife. You make 100 horizontal and 100 vertical incisions and have to calculate the size of the biggest piece,” says Professor Jan Madey from the University of Warsaw. “It would seem that finding the fastest way out of a labyrinth is a purely abstract problem, not a realistic one. But in the age of the Internet, we are faced with this very issue on a daily basis. After all, when we send an email, our computer uses a specific algorithm – written by programmers – to find the quickest possible way to reach our recipient, weaving its way through the labyrinth that is the world wide web,” adds Bartosz Klin, PhD from the University of Warsaw.

Participants not only solve a given problem, but also write code in a computer language which others will be able to use to solve similar problems in the future. “The point is to seek out the best problem solvers. The best and brightest participants will go on to create new technologies for the rest of us,” says Professor Bill Paucher, ACM/ICPC Director and founder of the International Collegiate Programming Contest.

The best students sometimes need as little as 20 minutes to solve a problem; other will take up to several hours. But everyone has to hurry, since the top honours will go to the team which solves the most problems in five hours. 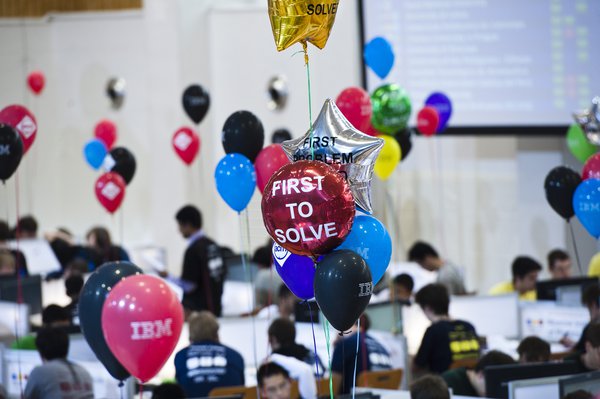 The solutions to the problems are sent in the form of a computer programme to the judges, who are on standby to assess whether the problem has been solved correctly. For each right solution, teams are given a balloon corresponding to the problem. The best team in the room will be easy to spot: it will have a bunch of balloons hovering above the table.

The balloons make not only practical sense; they also have a symbolic meaning. Professor Paucher says that they are meant to lift your spirits and the help the winners reach new pinnacles, since winning the ACM ICPC World Finals opens up a whole new career horizon. “Some of the laureates decide to study abroad, e.g. by pursuing a PhD at the Massachusetts Institute of Technology, and go on to stay in the United States. Others return to Poland and get university tenures here. Others choose to go into business,” Professor Madey says. Andrzej Gąsienica-Samek, who was on the winning team in 2003, set up his own company and used his contacts from the World Finals in Beverly Hills to expand his activities. Today he uses problems solved during the competition to test his future employees and to teach programming. After all, if you manage to solve a World Final problem, you will manage to solve every future problem, too.