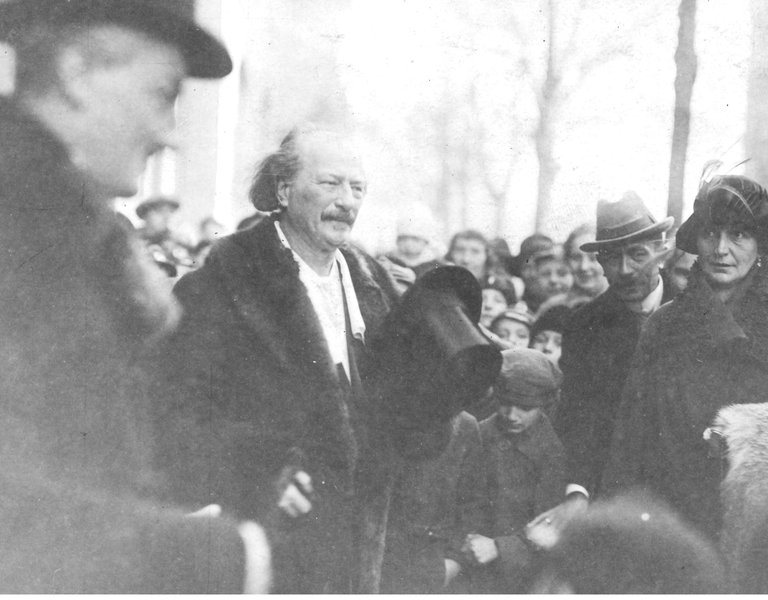 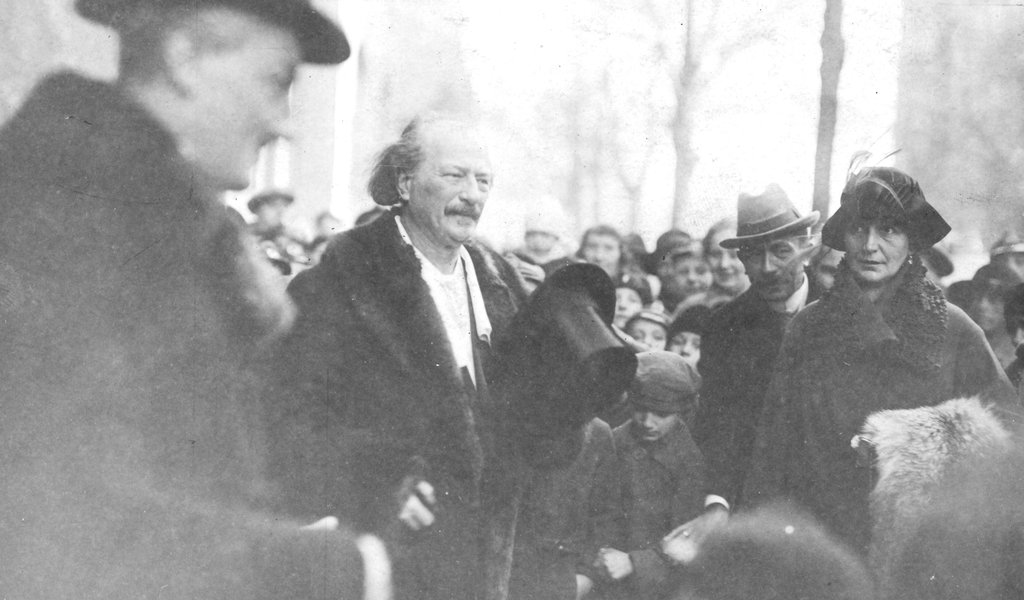 He won Poland on the piano

The Polish cause would not have found such a broad audience in America had it not been for his talent and fervent patriotism. Also, it is largely to Paderewski that we owe the rebirth of our country. It is fitting therefore, that we should revive his memory. 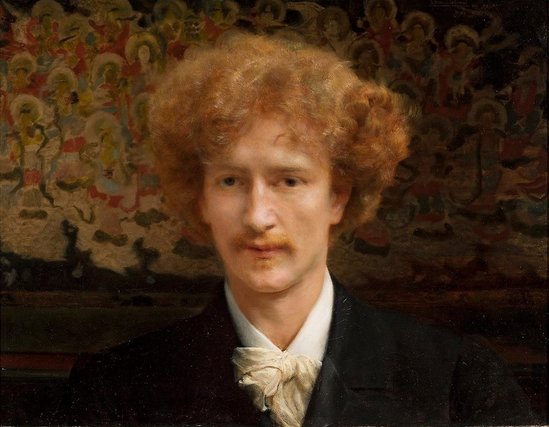 Ignacy Jan Paderewski was better known and more popular than Frederic Chopin, who in his lifetime never made a big name for himself as a pianist in America. Admittedly, Paderewski was active 50 years later, but we should remember that both musical geniuses rose to fame as piano virtuosos. Paderewski owed his renown to America, an emerging modern power which by the late 19th century had grown into a pyramid of wealth, dollars and capitalism, the world’s richest country. Paderewski conquered America already during his first tour of the continent. In 1891, he set foot in New York, where he arrived after his London success aboard a steamship named Spray. Enthusiastic reviews in England of the new star of European music had caught the eye of Steinway, a piano manufacturer, which decided to build the advertising campaign of its modern instruments around the Polish virtuoso, then aged 31.

Paderewski’s good looks and charm were a major factor too. His female audiences in the United States and England were enthralled by his romantic appearance and way of playing.

The reddish shock of hair, the air of a handsome dandy, his aristocratic manners, command of foreign languages, and piano virtuosity had an electrifying, intoxicating and bewitching effect on women in the audience. His performances saw women barging onto the stage, laying siege to concert halls, and shrieking and cheering without end (just like at The Beatles’ concerts 70 years later). This pattern would repeat itself in Boston, Philadelphia, Chicago and many other cities.

Although few musicologists and historians of music have taken note of this, Paderewski’s career was built by women. These included women he was emotionally attached to, had affairs with, and was loved and supported by, such as pianist Annette Jessipova, princess Rachel de Brancovan, Helena Górska (who later would become his wife), Laurence Alma-Tadema (daughter of the great painter), and earlier on Helena Modrzejewska, as well as the thousands of American women who idolized and adored this handsome and charming Pole.

Many of them had a habit of playing his pieces on pianos adorned with porcelain busts of the Polish virtuoso, or of falling asleep to the tune of Chopin’s mazurkas that were played by wind-up music boxes with a small Ignacy figure standing or seated at the piano.

His first tour comprised 80 concerts in 33 cities, starting with the triumphant performance at Carnegie Hall. The following day, New York papers hailed him as “the titan of the piano,” a genius, the king of pianists, the greatest master ever etc. “A breathtaking triumph,” wrote an “Evening Post” critic. The week-long spree of concerts propelled the pianist to stardom and made him a figure lionized by American millionaires, politicians, and Broadway stars. Paderewski made friends with the railway tycoon Vanderbilt, with J.P. Morgan who would become his banker, and with the publisher and press mogul Joseph Pullitzer, whose papers came in handy when Paderewski began to be politically active in America during the World War. His other acquaintances included Mark Twain and William Chase.

In America, Steinway & Sons made sure the Polish virtuoso had modern coverage and publicity. Even though it was Paderewski, a young star from Europe, who was supposed to advertise their grand and upright pianos (sales increased by 400 percent following his concerts), he too was given enormous publicity by Steinway. Part of it was Paderewski’s Train. Moving from town to town, Paderewski could not practice in hotels he was staying in, and had difficulty finding the right instrument. To address this problem, tour organizers arranged for a train that would pull Paderewski’s salon car with a room to relax, sleep, and play the piano.

Travelling in the second car was a spare piano and a tuner. Another car was occupied by a lackey, a servant, a photographer, and porters who would carry the artist’s luggage or move his piano should the one at the local concert hall prove unsuitable. Other cars followed with a kitchen, a dining room and a personal chef, a car for the friends and guests Paderewski would take on his journey, and a separate car for the journalists and critics covering his concerts.

The train became a sensation. Tens of thousands of people lined its route from Boston to Philadelphia during the second tour. Fans would gather in the night to wait for the train and cheer as it passed by, with Ignacy Paderewski standing at the window, a cigar in his hand, and waving to the crowd.

The first tour earned Paderewski a million dollars (in today’s money), and the next one brought in even more. No other musician before had been paid as much, not even Caruso, Melba or Anton Rubinstein, who were all considered major music stars. In subsequent years, Ignacy Paderewski went on 18 concert tours (featuring 80-100 concerts each) in the United States alone, to say nothing of his additional charity concerts, and White House performances given for presidents Theodore Roosevelt, W. Taft, W. Wilson and Herbert Hoover.

Paderewski considered himself a composer, treating his pianist career as a footnote. He dreamt of Richard Wagner’s fame, a musician he looked up to. Paderewski’s opera Manru was staged with great success at the Metropolitan Opera in New York in 1902 to mark its inauguration, and received glowing reviews despite its mediocre libretto and boring plot. The Polish pianist made over 100 vinyl records in the USA, which sold millions of copies.

A patriot and politician fighting for his home country

When the World War broke out, Paderewski, following his many affairs with some of Europe’s most beautiful aristocrats, was happily married to Helena Górska (his long-time friend who had abandoned her husband for him), lived in his palace at Morges, on Lake Geneva in Switzerland.

In 1915, he and his wife left for America. Paderewski stopped giving concerts (making exceptions for the Polish diaspora and the Polish Army in France, and to help war victims in Poland) to devote his energies and fame to advancing the cause of Poland. He used his contacts to draw the interest of US financial and political elites to the rebirth of Poland after 120 years of partitions.

Paderewski’s friendship with Col. Edward M. House, President Woodrow Wilson’s chief foreign policy advisor, allowed him to get into the White House and discuss the Polish issue with the president himself.

Influenced by Paderewski, Wilson became an advocate of Polish independence. After the United States entered the war, which sealed the allied victory, the American leader demanded that new borders be drawn in Europe. In point 13 of his Fourteen Points for the Versailles Peace Conference (1919) Wilson demanded that Poland should be restituted on the map of Europe.

The Polish cause might not have prevailed in the post-war wheeling and dealing of Versailles had it not been for Ignacy Jan Paderewski and his leverage with the political decision-makers of the time: President Wilson, British Prime Ministers Lord Balfour (Paderewski’s friend) and Lloyd George, and French Prime Minister Clemenceau. As the world’s new political and geographical order was being agreed upon, Polish politicians, including Roman Dmowski, Józef Piłsudski, and Wincenty Witos, were little known in Europe, let alone in America.

Paderewski would give personal advice to major world leaders, tell them about the wrongs done to Poland, which had been plundered and carved up by Russia, Prussia and Austria, and invoke their sense of justice. He succeeded, aided by his international renown as an artist.

After the Peace Conference began near Paris in January 1919, Ignacy Paderewski became the head of the Polish delegation, and put his signature to the treaty once President Wilson’s conditions had been accepted by the victors. As the composer himself put it, his purpose in life had been accomplished.

One day in his family manor of Kurylowka in (the) eastern Polish borderlands, he vowed to devote his life to saving Poland after being whipped by Russian Cossacks who came to arrest his father. His pianist career was important in that it allowed him to gain social position and fame. And success in America was necessary to achieve the overriding aim: freedom for Poland.

Ignacy Jan Paderewski was the prime minister of free Poland in the first year of its new existence. His life and purpose should always be an important lesson to us. Meanwhile, this outstanding Pole seems to be somewhat forgotten. It is time we changed this.