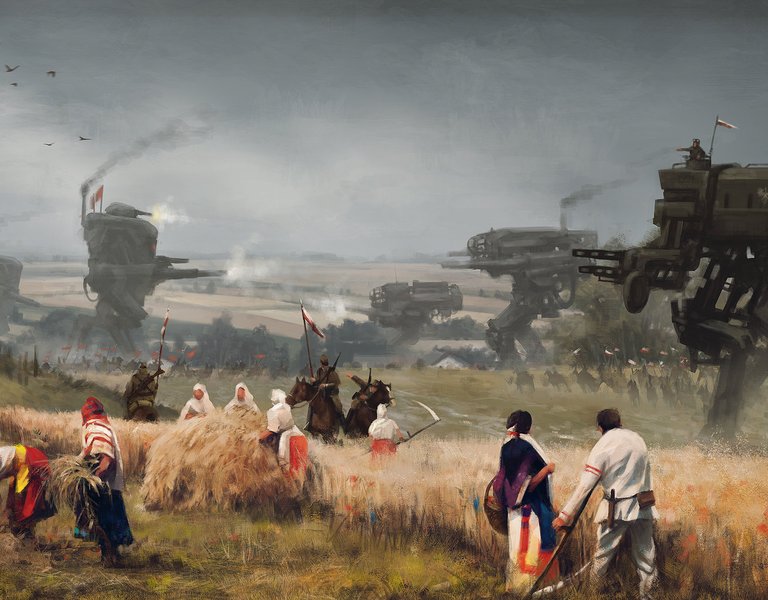 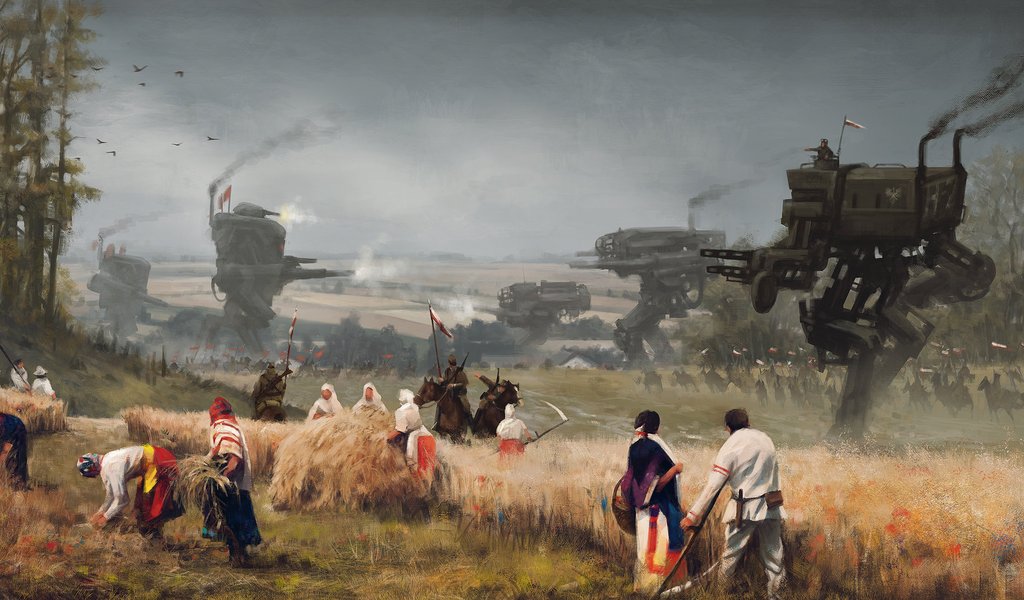 Reviewers the world over are fascinated by "Scythe" – a board game whose action is set in the alternative world of 1920+. While praising the game’s plot, they especially emphasise its graphic design. Its creator is Polish artist Jakub Różalski. Tens of thousands of copies of the game have already been sold, and successive reprints are planned. Jakub Różalski told Poland.pl about where he draws his inspiration from, his fascinations and new projects.

Poland.pl: When we emailed you to request an interview, you pointed out that you do not create computer graphics, rather you are a painter. But surely this is not traditional painting?

Jakub Różalski: No, it is digital painting, but my roots are in traditional painting, my approach and techniques are those of painters. I do not much like to draw, I usually even sketch with spots and shapes, basing on colours, the transience of the moment and moods. For the past few years I have been mainly painting digitally using a tablet, but that is merely a tool. I continue to paint the traditional way on canvas but ever less frequently. 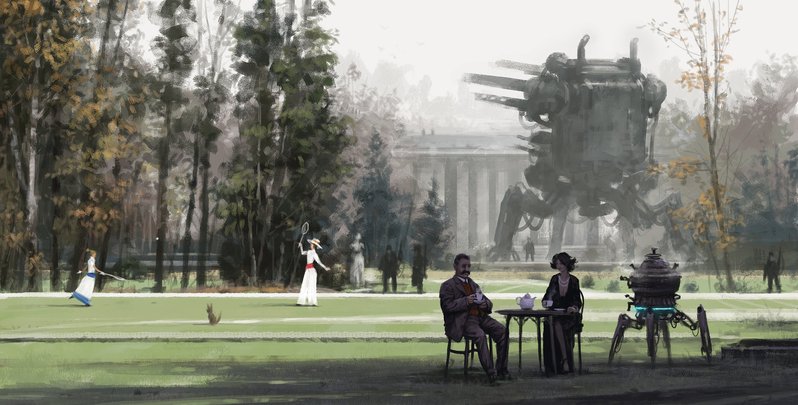 How does creating something on a computer differ from traditional painting?

It’s difficult to generalise. I believe it is an individual matter for every artist, his craft, technique and the effect he wishes to achieve. Personally, it enables me to save loads of time and is often easier on my nerves. And there’s the ease of making changes, even in a finished picture. But the entire creative process is pretty much the same, in my case practically the same as with oil or acrylic paintings.

Reviews have compared your work to painters associated with 19th-century Polish realism, to Józef Chełmoński and Maksymilian Gierymski. How do you feel about such comparisons? Is the painting of that period your main source of inspiration? How about books, films etc.?

For me that is a huge compliment and a cause for satisfaction and pride. It is no secret that 19th-century painting and masters such as Brandt, Chełmoński, Gierymski and Szyszkin were always unattainable role models and sources of inspiration. Not only because of their brilliant techniques and general craft but also thanks to their subject matter. But it was books, films and history that have always inspired me the most. I was raised on Henryk Sienkiewicz, Stanisław Lem and J.R.R. Tolkien, I was fascinated by Aleksander Ford’s feature film Knights of the Teutonic Order (Krzyżacy) and I know the film version of The Deluge (Potop) by heart. Those books and films have to a large extent shaped me as an artist and human being. To some extent they have also determined my scope of interests and how I try to tell a story through my paintings.

But, simultaneously, realistic elements are accompanied by elements of fantasy, giant war machines encroach on the idyllic Polish countryside. Is that steampunk? Archeofuturism? What do you call your style of painting? 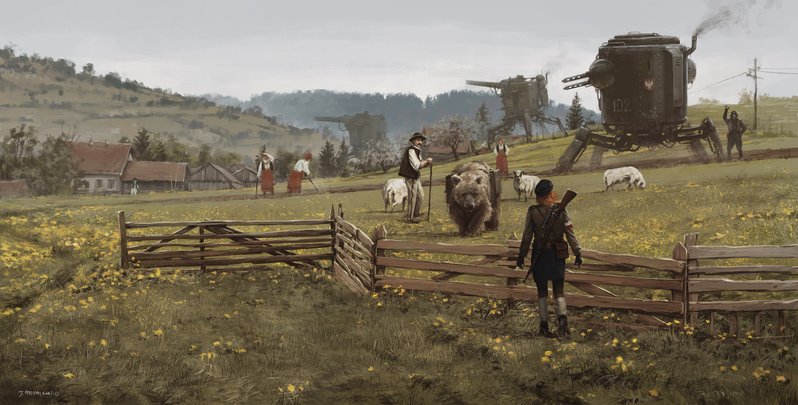 Jakubism… [laughs]. I’ve already heard it called neo-impressionism mixed with realism... I do not much fancy all of this terminology and pigeonholing. People have a need to label everything, but I don’t give it a thought. I simply paint whatever interests and fascinates me and the way I like. Above all, I create for myself. I’ve always been interested in wild nature, fantasy and mythology, folklore and animals, the idyllic and simple rural life. I like empty spaces and quiet. I’ve never liked the hustle and bustle of the city, crowds and machinery. Perhaps that is why in my work machines play the role of “villains” that aggressively invade tranquil rural life. Therein, of course, is a certain symbolism and quite a few personal reflections. I am mainly interested in telling a story and creating an original author’s milieu for it.

In your work the most noticeable thing are the constant historical allusions. People and machines with white and red arm-bands clash with machines bearing Soviet stars, the Polish insurrectionists of 1863 fight alongside werewolves. Is the history of Poland and Europe so important to you?

I’ve always been passionately interested in history. It is extremely important to me and is my main source of inspiration. In my art, I like to create alternative environments for historical facts and relate them in my own original style. As a result, my work is even more popular around the world than it is in Poland. I know that thanks to my works many people became interested in history, the events of 1920, the fate of Wojtek the Bear and the 1863 January Insurrection. That was never my chief goal and motivation, but I’m very proud of that fact. I believe people are quick to forget about history and the lessons it provides.

You painstakingly re-create the uniforms and weaponry of soldiers and the period dress of women and men with great attention to detail. That is not only a matter of sensitivity and painting technique but also solid documentation and historical knowledge. How do you prepare yourself for work? 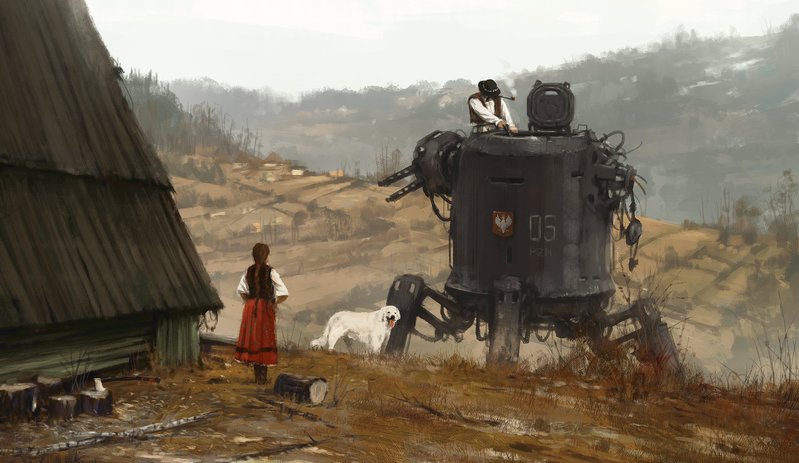 As I said earlier, history is my great passion and I have probably fairly extensive knowledge of the historical periods that interest me. I have many books and historical albums that I love to collect. Today of course, practically any piece of information can be found online. That greatly speeds up collecting materials of a given period – to me that is one of the most pleasant aspects of my work and a highly inspiring process. When reading some story or going through old photographs I often get an idea for a new painting. I also take loads of pictures in various museums and skansens. Later, that really helps me to realistically re-create the reality of a given epoch.

So far, your painting series focused on events such as Poland’s 1863 anti-Russian Insurrection and the Polish-Bolshevik War of 1920. Which historical events will feature in your forthcoming works? 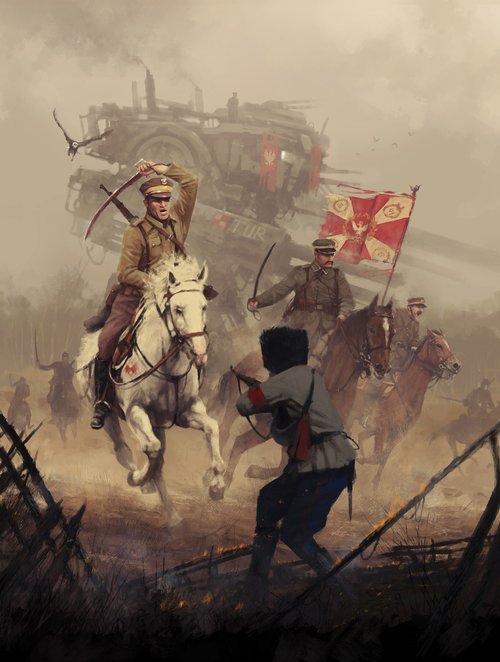 I shouldn’t want my painting to bear an anti-Russian imprint or to be perceived as political or anti-anything for that matter. I am greatly inspired and fascinated by Russia and its culture. It is a beautiful country albeit a very specific one, with an extremely difficult and tragic but also rich history and culture. I seek to have my work depict and promote our Polish history and culture but without attacking anyone or anything. The period of the 1920 war has always fascinated me for various reasons First of all, I found it exceptional that a mere moment after regaining its independence our country was able to mobilise and stop the Bolshevik march on the West which probably changed the fate of post-war Europe. Secondly, it was the last war in which the cavalry still played a crucial role and was used on a massive scale. Currently I am concentrating on my project Wolfpack-1863. Contrary to what it might seem, werewolves do not attack but support the tiny hamlet Podwilcze in a clash with tsarist forces.

The very successful Scythe board game was created on the basis of your vision of the world depicted in your 1920+ project. The strategic computer game Iron Harvest is now in the preparation stage. There has also been talk of a film based on your paintings. What are your current artistic and professional plans?

I am extremely happy that my 1920+ world has become so popular, fascinating and inspiring so many people. To an artist that gives a great sense of satisfaction. Meanwhile, I have begun working with a major American producer on a film version, maybe even a TV series set in the world of 1920+, so please keep your fingers crossed. However, at the moment I am concentrating mainly on the Iron Harvest game and on new projects in the world of Wolfpack-1863. I don’t like to look too far into the future and plan ahead, but I have no shortage of proposals and interesting offers. 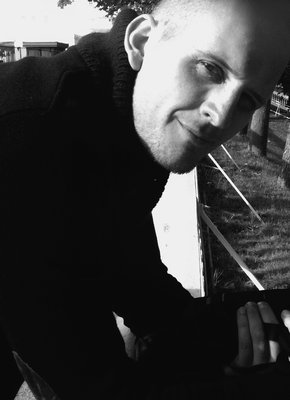