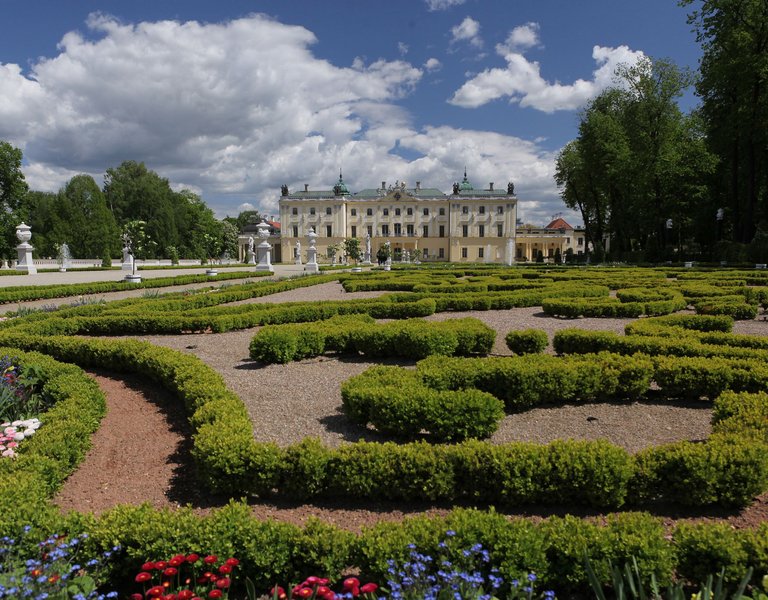 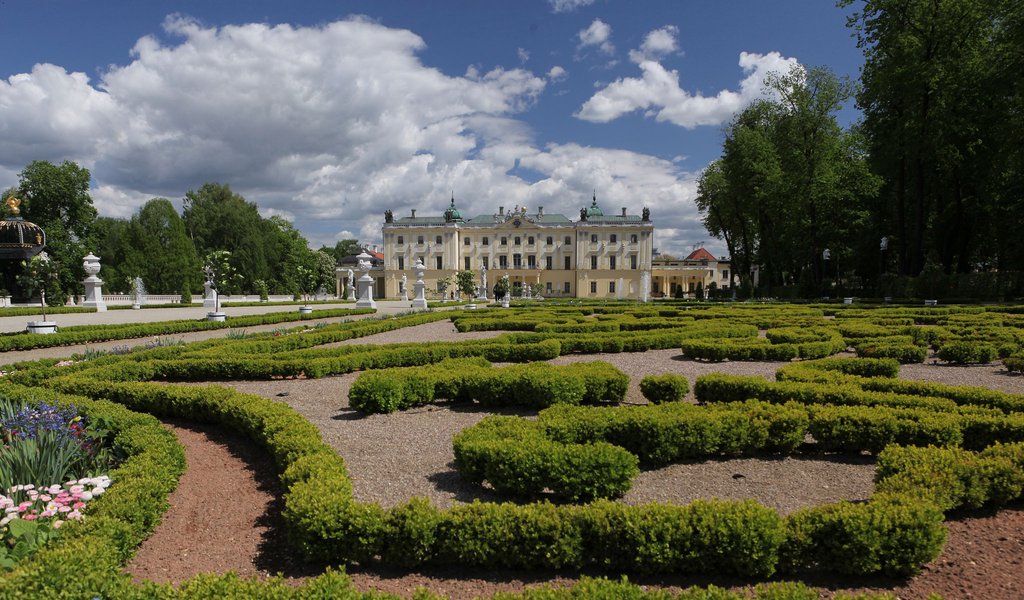 Speaking with admiration of British noble residences we often fail to realise how many such castles, palaces and manors are still in existence in Poland, or how many there were in the early modern and interwar periods.

It is the night from the 14th to the 15th of April 1912. During its maiden voyage from Southampton to New York via Cherbourg and Queenstown, the unsinkable – as its constructors assured – transatlantic liner Titanic, sinks. Among the many victims of the disaster is the heir to the estate and title of Downton Abbey in Hampshire, Earl Grantham Patrick Crawley. So begins Downton Abbey, a television series that has become a runaway success.

For Robert Crawley, the current Lord Grantham, and his wife Cora, a descendant of a family of American financial tycoons, the shipwreck is a real tragedy. Their sole offspring are three daughters who, according to the law, cannot inherit the estate or title. As a result, these honours now belong to an unknown cousin, Matthew Crawley, a lawyer and a member of the middle class. In accordance with Lord Grantham’s wish, Matthew and his mother Isobel come to the Grantham estate. This sets the scene for the opening episodes of Downton Abbey, a British historical drama series that has captivated audiences the world over.

A microcosm of British society

First aired on September 2010, Downton Abbey has become an undisputed hit in each of the 100 countries in which it was shown. In the United Kingdom, the second and third seasons were watched by an average of 12 million viewers. The series received all possible prizes, including the EMMY and BAFTA, and made it into the Guinness Book of World Records due to the incredibly positive reviews it received.

The explanation for this is obvious – the series is simply spellbinding, faithfully recreating the ideals of the time and touching on timeless themes. The plot unravels in a way that triggers our interest, and the producers’ attention to detail when it comes to hairstyles, clothing and interiors is simply astounding. It is a great world to escape to, an antidote to our current reality.

The crème de la crème of the series is the acting skill of the cast – indeed it’s hard to say who does the best job: Jim Carter as the ideal butler Charles Carson, Hugh Bonneville as the Earl of Grantham, the serious owner of the estate and head of the family, or Maggie Smith as Lady Violet Crawley, Dowager Countess of Grantham, a quintessential lady endowed with a sharp tongue and a sarcastic sense of humour.

Life at Downton, both for the Crawleys and their domestic help, presents a microcosm of British society from 1912 until the interwar years. The script is also excellent and historically accurate, but how could things be otherwise when the author is someone steeped in noble lifestyles, himself a descendant of an aristocratic family – the Academy and Emmy award winner Julian Alexander Kitchener Fellowes, Baron Fellowes of West Stafford.

The Downton Abbey depicted in the series is really Highclere Castle in Hampshire, built at the site of the medieval palace of the Bishops of Winchester, who owned the estate from the seventh century onwards. By 1675, the Carnovans are already settled in. The castle is visited annually by thousands of tourists.

Speaking with admiration of British noble residences we often fail to realise how many such castles, palaces and manors are still in existence in Poland, or how many there were in the early modern and interwar periods. Most people are familiar with - or at least have heard of - the Radziwiłłs’ Nieborów, the Czartoryskis’ Puławy, the Tarnowskis’ Dzików, the Zamoyskis’ Kozłówka, the Sapiehas’ Krasiczyn, the Raczyńskis’ Rogalin, or the Potockis’ Łańcut, yet we often forget that the latter is but a small fraction of Poland’s pre-war heritage, much of which was destroyed, yet deserves to be remembered and promoted.

The Poles were made aware of this bounty by the historian Roman Aftanazy, curator of the National Ossoliński Institute, a great lover of Polish history. Dzieje rezydencji na dawnych kresach Rzeczypospolitej (‘The history of manor houses in the former Polish Eastern Borderlands’), a monumental 11-volume tome bearing unique illustrations and descriptions of over 1000 Polish estate houses, is the fruit of his arduous work. Aftanazy’s research focused on Poland’s Eastern Borderlands within the pre-partition boundaries of the Commonwealth. In addition to the history of palaces and manor houses, interior design, furnishings and surroundings, the book provides background on each locality and describes parks and gardens.

There is also no shortage of anecdotes about the owners, many of which could serve as an inspiration not only for a historical drama but also for a suspense series. The foremost of the borderland residences include the Radziwiłłs’ Nieśwież and Ołyka as well as the Branickis’ Biała Cerkiew in the Kiev region – one of Europe’s largest estates at the time. Also located in the Kiev region is the Hańskis’ and Rzewuskis’ palace in Wierzchownia, once inhabited by Ewelina Rzewuska, who went on to marry Honoré de Balzac (the wedding took place in Berdyczów).

In the Bracław region, the Jaroszyńskis’ palace in Antopol stands to this day. The last of the line, Karol Jaroszyński, was a generous philanthropist and brilliant financier. In 1909, he made a fortune in Monte Carlo; he was one of the founders of the Catholic University of Lublin, owned 53 sugar plants, and supported Polish educational and charitable institutions. In 1917, he lost nearly everything during the October Revolution. He died in Warsaw.

Returning to the roots

The Potockis’ Tulczyn palace was the gem of Podolia (some of the buildings are still standing), another was the ever charming Zofiówka park near Human – a monument to the love of the notorious noble Szczęsny Potocki to his third wife Zofia. The pride of Czarnomin (once known as Rozbójnia) was a palace whose semi-oval avant-corps is flanked by a colonnade reminiscent of the southern façade of the White House in Washington.

Highlights of the Lviv countryside include the palace of the Princes Sanguszko in Podhorce, and Świr Castle, whose last owner was Irena Lamezan-Salis, the wife of Home Army general Tadeusz Bor-Komorowski.

The list could be continued on and on – there were thousands of such residences. The lifestyle of Polish landed gentry and aristocracy is replete with material for a film or TV series. Beautiful manor houses full of works of art, nestled within picturesque parks; a lifestyle rooted in manners, a diverse range of personalities, including patriots and cosmopolitans, profligates and provident landlords. Add to this an exciting backdrop of historical events and mores, the particulars of life in partitioned Poland and the struggle for Polish nationhood, culture and language.

Poland has also seen its fair share of native TV series attempting to portray the life of high society. Sława i chwała (Fame and Glory), based on the novel by Jarosław Iwaszkiewicz, is set approximately in the same era as Downton Abbey. Similar subjects, set in earlier times, are touched on in Rodzina Połanieckich (The Połaniecki Family), based on the novel by Henryk Sienkiewicz, as well as Noce i dnie (Nights and Days), an adaptation of Maria Dąbrowska’s novel. The novels of Maria Rodziewiczówna and Józef Weyssenhoff provide ready-made scripts and ideas. In a time when we are inundated with TV series devoted to similar themes it may not be a bad idea to look to an internationally successful model for inspiration. And to make a Polish Downton Abbey.