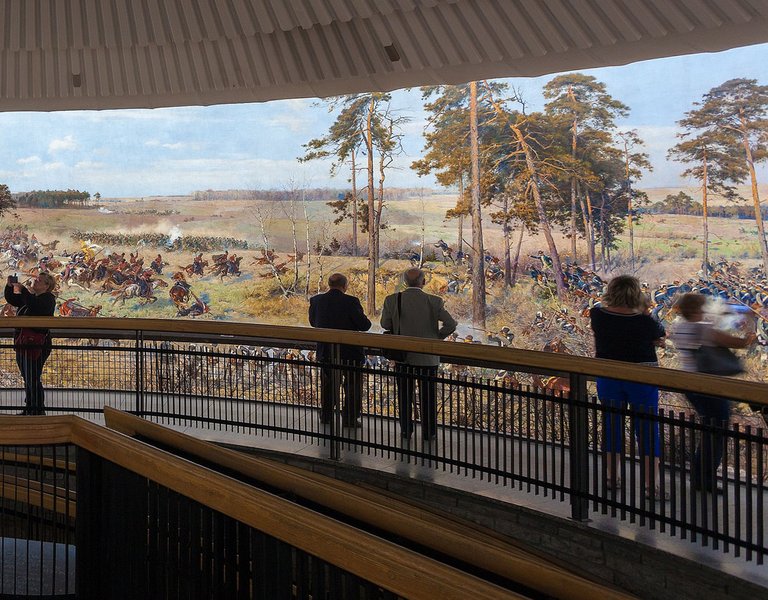 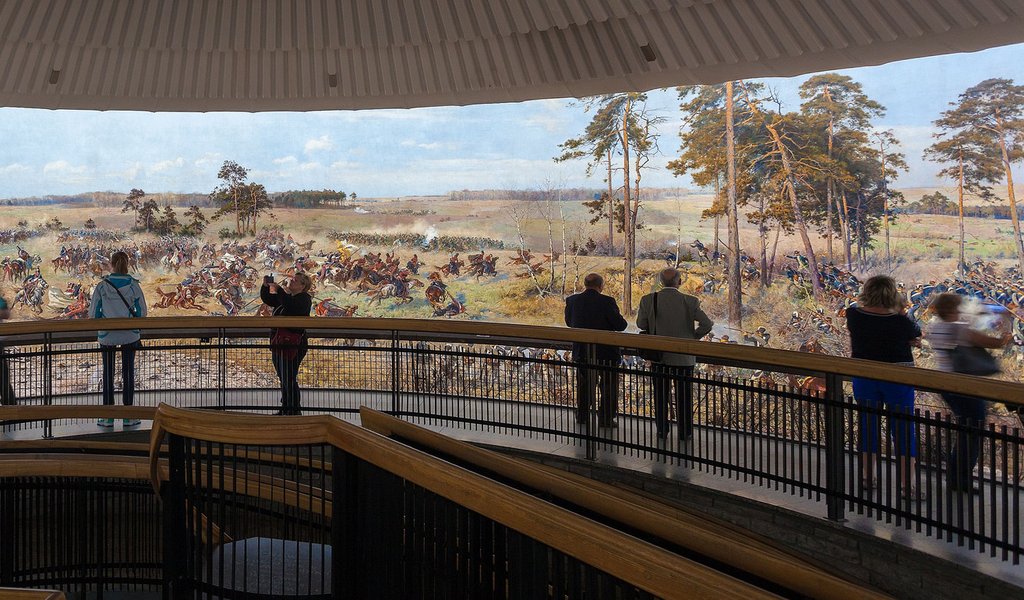 The Raclawice Panorama in Wroclaw

The Raclawice Panorama is Poland’s most famous battle scene painting. It is the only cycloramic painting in the country and one of only a few in Europe.

The Raclawice Panorama was first put on display at the Universal National Exhibition in Lviv in 1894 to mark the 100th anniversary of the Kościuszko Rising, a national insurrection against Russia and Prussia. It depicts the first victorious battle fought by troops under Tadeusz Kościuszko’s command near the village of Raclawice. Even though the Rising ended in defeat, setting the stage for the third and final partition of Poland in 1795, this initial success impressed itself on the national consciousness and with time became a potent symbol. For over 120 years , during which Poles were subjugated and struggled to regain sovereignty, the painting helped them believe that the nation could unite and prevail over a stronger foe. 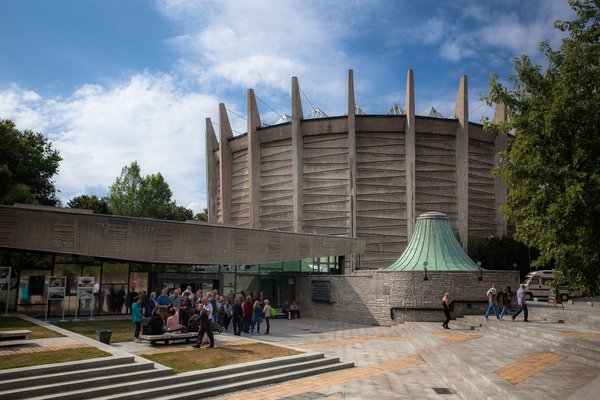 The Panorama’s idea can be traced back to Jan Styka, a painter from Lviv, who invited the outstanding battle scene painter Wojciech Kossak to work with him. Their assistants included Ludwik Boller, Tadeusz Popiel, Zygmunt Rozwadowski, Teodor Axentowicz, Włodzimierz Tetmajer, Wincenty Wodzinowski and Michał Sozański. It took them nine months in 1893 and 1894 to finish the huge painting, which covers 1,800 square meters (15 m in height and 114 m in length) and consists of 14 strips of canvas stretched out on a cylindrical wall round a circle that’s nearly 38 m in diameter. It took 750 kg of paint just to prime the surface.

The opening ceremony was held on 5 June 1894 at a rotunda designed by Ludwik Baldwin-Ramułt. For the following half century, the Panorama remained Lviv’s cultural magnet, attracting large numbers of tourists.

In 1944, the rotunda was hit by a bomb that seriously damaged the canvas. Until the end of WW2, it was kept hidden in a box, and stashed away in the vault of a Bernardine monastery in Lwow. Following the change of Poland’s borders, the painting was restituted to Wroclaw along with part of Lviv’s museum and library collections. Despite reluctance on the part of the Communist authorities, the artwork was put on display for a second time at a rotunda built in the 1960s. The unveiling occurred as late as 14 June 1985, following painstaking and protracted conservation work. Banned by censors for decades, the Panorama soon became Wroclaw’s star attraction. 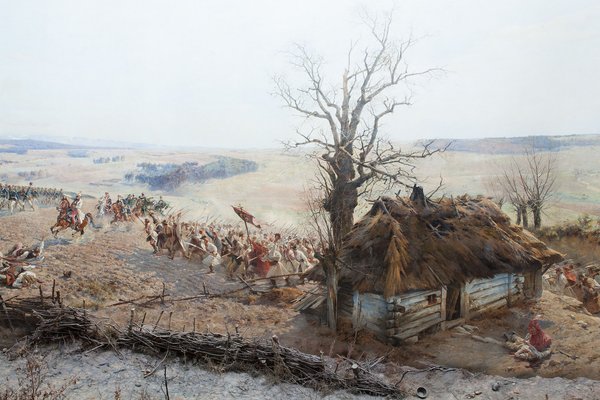 “The Raclawice Panorama is a relic of the 19th century’s mass culture,” says Romuald Nowak, head of the Raclawice Panorama branch of the National Museum in Wroclaw. “Few people realize that 19th-century panoramas were like going to the movies today, allowing people to explore the world and history. They were handy propaganda tools used to boost patriotism and national pride; they drew big crowds and made huge profits.

The Panorama is a very realistic depiction of selected scenes from the Battle of Raclawice. Before starting their work, the authors analysed the course of the engagement, and drew sketches of Raclawice environs to render its topography and flora as faithfully as possible. Their battle scenes demonstrate great panache and skill.

The battle’s commander Tadeusz Kościuszko, is shown astride a galloping horse in a russet coat thrown over his general’s uniform. Further on there is a spirited attack on the Russian artillery, mounted by peasants armed with scythes. Wojciech Bartos, the Rising’s hero who symbolizes peasants fighting for Poland’s independence, is smothering a cannon’s fuse with his hat. Two men have cast tethers on a canon and are about to start pulling it towards Polish positions. Flags are fluttering in the wind – one featuring a sheaf, scythe and pike, which represent peasants’ work and struggle, the other showing the Black Madonna of Czestochowa. Russian artillerymen, fleeing in panic from the battlefield, get bogged down in the ground that has been freshly ploughed. Startled by the boom of artillery fire, horses break their harnesses and topple over carts. The scene is being watched by General Alexander Tormasov, the commander of the Tsar’s troops who is escorted by Cossacks and wears a grey and blue coat. Nearby, in a cloud of dust raised by horse hooves, the Polish cavalry is charging at the Russian horsemen, Don Cossacks in red uniforms. 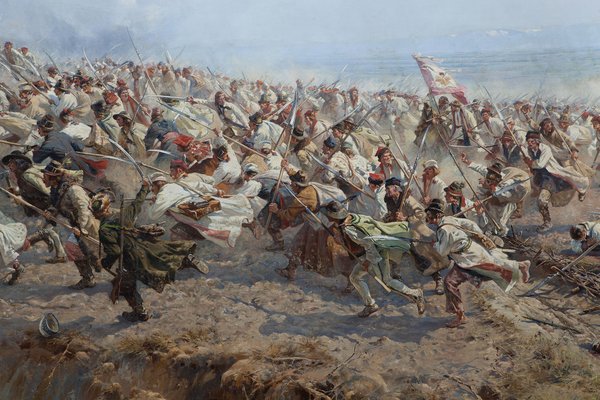 No less dramatic scenes play out at the rear of the battle. Wagons and a field hospital are set up in the manor of Dziemierzyce. Village women are tending to the wounded. A priest is kneeling down beside a dying soldier. A blood-covered peasant man is lying in front of the cottage, with a despairing woman leaning over him. A group of women, children and old people are praying for victory by a roadside cross. Among them is a symbolic figure of the beggar-lyrist, whose songs will immortalize the heroic feat of the insurgents.

The panoramic painting was supposed to take viewers out of their world and transport them into a different reality where they would play a part in the depicted events. What made this illusion memorable was not only the realistic style, but also the special perspective, the dispersed light illuminating the painting, 3-D props in the foreground that imperceptibly merge with the canvas proper, and as well as the building’s architecture.

“To climb onto the viewing platform, you have to navigate a dark and tortuous tunnel, which makes you lose your bearings and insulates you from the city noise,” explains Romuald Nowak. “Surrounded by the canvas, you have no points of reference, like windows, through which to look outside. The Raclawice Panorama is the ultimate work of 19th-century 3-D art, a perfect illusion, a spectacle of mirages that is as striking today as ever. This is one of the reasons why the Panorama doesn’t grow old and continues to fascinate despite technological progress. 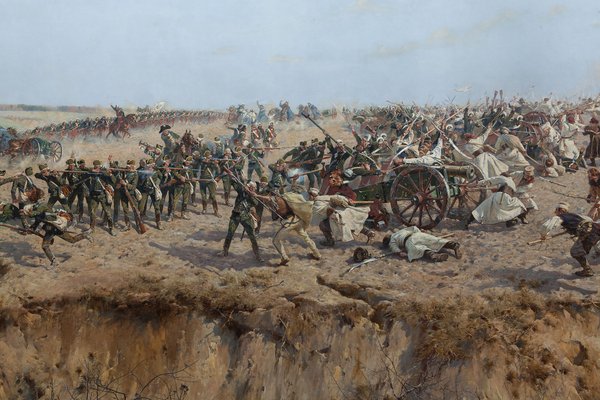 “Last year, we had an almost 20-percent rise in attendance, with 330,000 visitors,” says Romuald Nowak. “Of the 13 surviving historical panoramas in Europe, ours has some of the best visitor numbers.”

So what makes it special? “To begin with, its high artistic value,” says Romuald Nowak. “Panoramas were rare works of art, created as they were by painters of no outstanding talent. The commission for Raclawice Panorama was given to Poland’s best artists, just look at the canvas. Also, it’s one of Europe’s best displayed panoramas, with a system of special shows for visitors and commentary in 17 languages, including such exotic ones as Japanese, Chinese and Korean. That’s why roughly 20 percent of our guests are foreigners. For many Poles, the Battle of Raclawice continues to carry much symbolic importance. It was the first time in our history that all social classes, including the peasants, had joined in the struggle for independence. The Panorama’s authors knew that only if it was united would Poland regain independence. The picture’s message – unity makes us strong – is as topical today as it was back then.

The very first panorama dates back to 1788 in the form of Irish artist Robert Baker’s cityscape of Edinburgh as seen from Calton Hill. Three years later, he painted another one, this time the view of London from Albion Mills. The success of both panoramas prompted Baker to exhibit them in a purpose-built wooden rotunda in London. For over 75 years, it was the venue for more than 120 panoramas created all over Europe. In the 1830s, the dimensions of panoramas and rotundas were standardized. From then on, the canvases could move around, with the bill of shows changing as often as in today’s cinemas. In the late 19th century, panoramas were a craze on the stock exchange, with traders eager to buy shares of the companies that made them. Wooden rotundas were gradually replaced by stately buildings with sumptuous interiors. The subject matter of panoramas was usually history or religion. Their popularity came to an end at the turn of the 19th century with the advent of cinema.