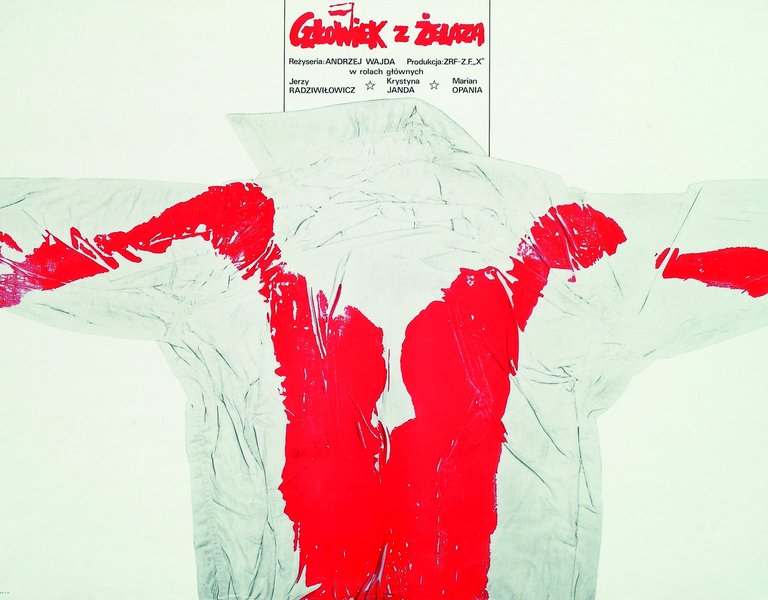 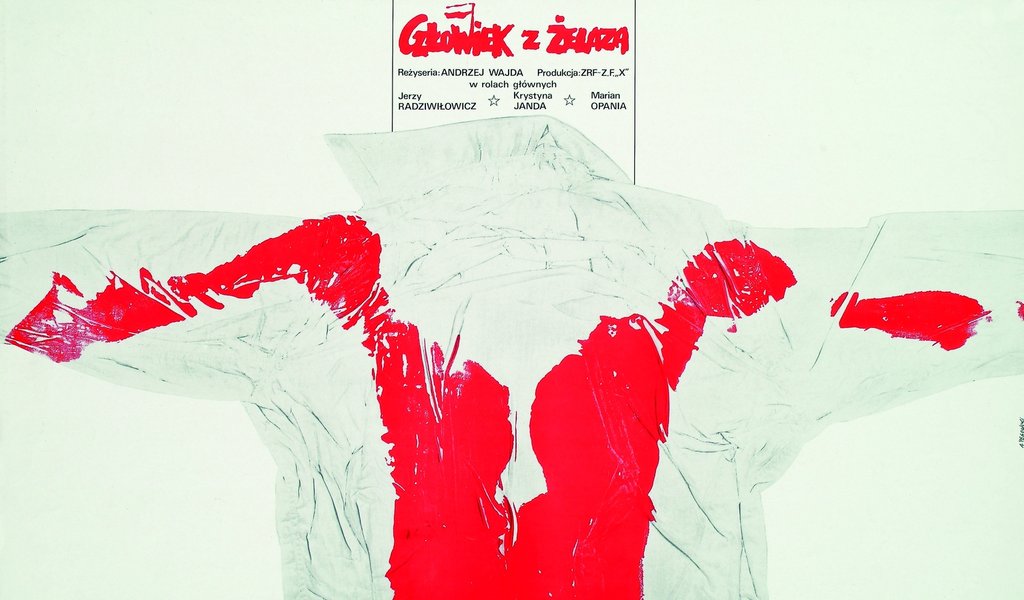 The Polish poster school flourished at a time when film posters in the West showed the leading actor’s face captioned in primitive lettering. Today, the works of Polish poster artists sell for exorbitant prices at auctions around the world.

“Loosened bra strap, crimson lips parted in an inviting smile and big eyes shining coquettishly from under long lashes.” “Niewinna grzesznica (Innocent Sinner) staged by the Wybrzeze Theatre was easy to describe and not too difficult to photograph, but conveying the play’s message in a poster was another matter. Waldemar Świerzy pictured her against a frolicsome pink-coloured backdrop with a blue strap and wearing a red toque. The letters in the title do not respect the established order: “N” is lower cased, “W” is upper cased and “sinner” with a big “n” flows in syllables down her side. 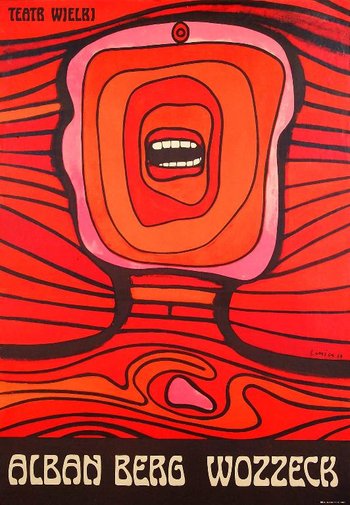 His portrait of an Italian woman in the poster for Two Cents Worth of Hope (Italian: Due Soldi di Speranza) is created by a few precise, but soft strokes of the brush. Marilyn Monroe from the series “Great People of the Cinema” has sharper features, but covered by a white mist similar to that which veiled Marlee Matlin in the poster for Children of a Lesser God of 1987.

Posters by Henryk Tomaszewski – the founder of the Polish Poster School – are abstract and thus much more difficult to read, leaving viewers with lots of room for interpretation. He illustrated the play History adapted from a Witold Gombrowicz’s novel with a green foot, whose toes form the “V” sign for victory, and his poster for Słowacki’s play Kordian pictured black ravens. Both posters represent the graphic trend in the Polish Poster School, which Tomaszewski represented.

The Polish Poster School, which included such prominent artists as Wojciech Fangor, Franciszek Starowieyski, Andrzej Pągowski, Roman Cieślewicz, Jan Młodożeniec, Leszek Hołdanowicz, or Andrzej Krajewski, was created soon after the end of WWII. In 1945, Eryk Lipiński, a fellow student from Warsaw’s Academy of Fine Arts visited Henryk Tomaszewski in his apartment in Lodz to suggest making film posters together. According to the story, Tomaszewski almost had a heart attack when he heard this. Since before WWII, the film poster showing a photograph of the leading man and set in primitive typeface was synonymous with kitsch. Tomaszewski could not have imagined back then that the Polish People’s Republic would become an art poster mecca and that the communist authorities would favour poster artists and commission posters for films, theatre plays, concerts and exhibitions, as well as propaganda posters to celebrate state holidays from them. 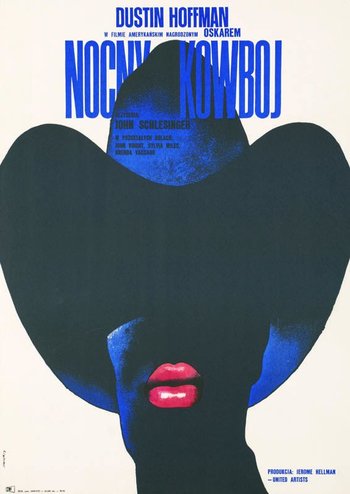 “The authorities were afraid of the potential of the poster’s symbolisms which could be used to overthrow the system. Hence they tried to have the artists under their control while also seeing to it that they lacked nothing,” Michal Trusz, graphic artist, poster-designer, graduate of Warsaw’s Academy of Fine Arts and its former academic teacher, tells Polska.pl

So poster art masterpieces were created for many years in Poland and nowhere else. The first international showing of the Polish Poster School took place in Vienna in 1948 at the Film Poster Exhibition, which honoured five posters by Waldemar Świerzy: Buterball (French: Boule de Suif), Men Without Wings (Czech: Muži bez křídel), Citizen Cane, Odd Man Out, and Pastoral Symphony. Jan Lenica scored a much larger success at the 1st International Poster Biennale, winning the gold medal for a poster illustrating the opera Wozzeck by Alban Berg in 1964, which became the “international icon of the 1960s.” Two years later, the world’s first Poster Museum was opened in Wilanow.

The early 1950s until mid-1960s represented the most creative years of the Polish Poster School, which first became called by this name in the 1960s. Its crowning were humorous circus posters and a series of posters for the National Opera House and Dramatyczny Theatre in Warsaw. The Polish Poster School died after Poland’s systemic transformation in 1989. The art poster was replaced by a classic poster with a photograph of the actor set in primitive typeface. In this respect Poland also caught up with capitalism. But masterpieces created by artists during the Polish People’s Republic continue to be appreciated by connoisseurs and collectors around the world. 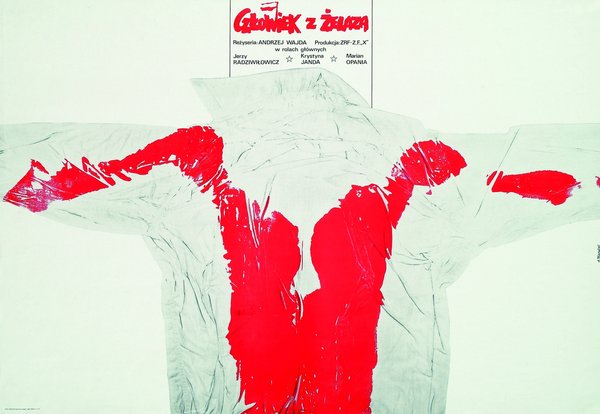 “Polish Poster School is distinguished by composition, typeface, symbolism and combining all of them into one. No can is capable of creating good lettering today, because the customer of the poster-designer prefers the type of posters used in mayonnaise ads, even if he intends to commission a poster for a concert of classical music featuring the works of Bach. Hence this yearning for old Polish quality,” says Michał Trusz.

Posters by Świerzy, Fangor, or Tomaszewski sell for five-digit sums at auctions. Michał Trusz’s collection includes a poster by Henryk Urbaniec with the artist’s autograph, which is valued at PLN 4,500. He believes that the poster will soon go up in value, but does not intend to part with it.

Collectors are willing to pay huge sums for posters by Waldemar Świerzy from his famous series Great Figures of Jazz, featuring Duke Ellington or Louis Armstrong. The prices collectors from around the world are willing to pay for his posters are shrouded in secrecy. 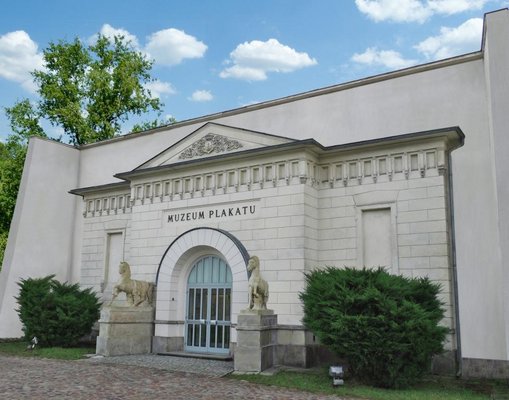 The first poster museum in the world

Founded in 1968 as a branch of the National Museum in Warsaw, it was the first poster museum in the world. It is very popular with foreign tourists and some of them visit Warsaw just to tour the museum. No wonder then that the museum, located on the premises of the Wilanow Palace and Park Complex in Warsaw which organises International Poster Biennales every two years, has in its collection works by Pablo Picasso, Andy Warhol and the stars of the Polish Poster School: Jan Młodożeniec, Henryk Tomaszewski, Waldemar Świerzy, Franciszek Starowieyski, Wiesław Rosoch, and Jan Lenica.

Fifty-four thousand exhibits are on display in the Wilanow Palace’s former manége, designed in 1848 by the architect Franciszek Maria Lanci.

The creation of an institution whose mission is collecting and archiving poster art was a pioneering project that set new standards in museum practice.

On 12 February, the Poster Museum in Wilanów will inaugurate a new exhibition titled 123…Polish Modern Posters Worth Remembering. It will present a selection of more than a hundred posters from the Museum’s collection.