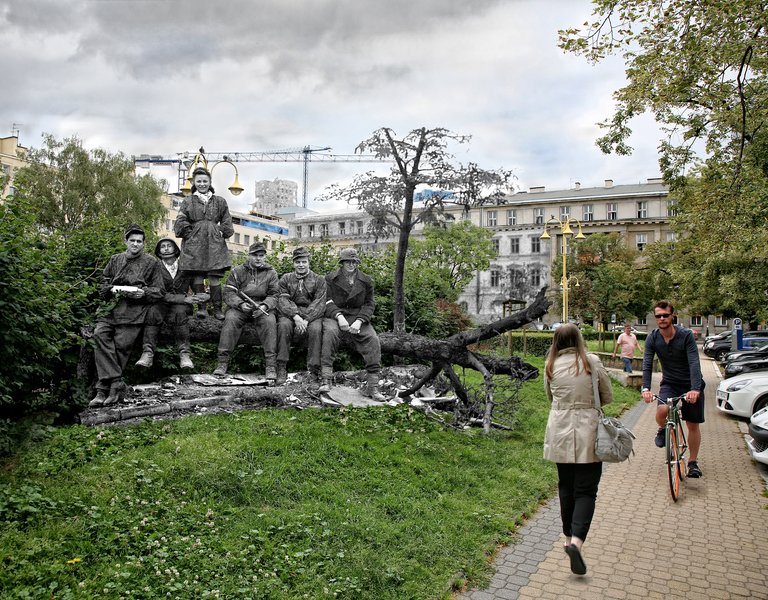 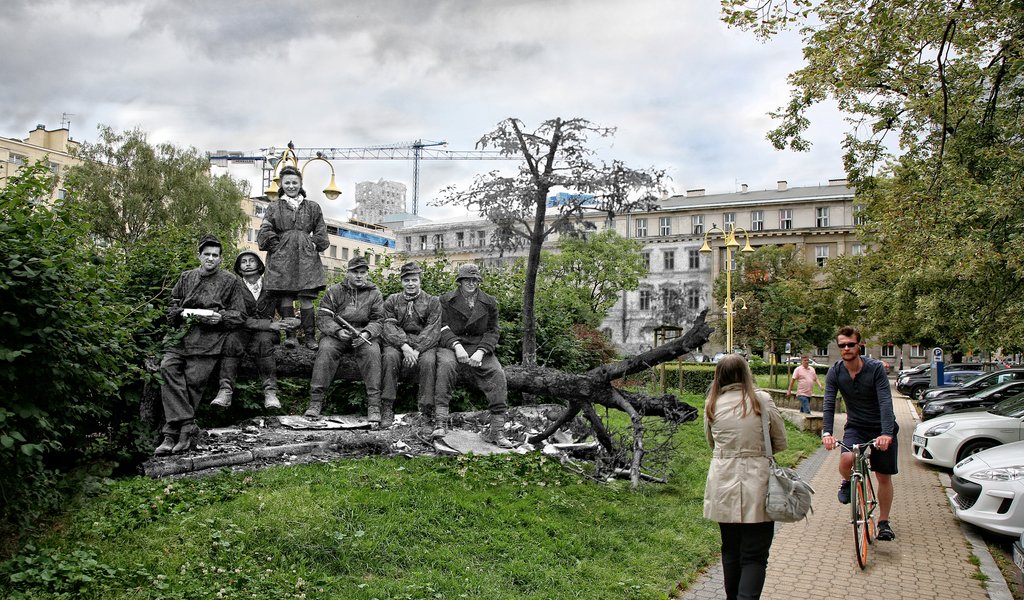 Warsaw Uprising transported into our times

Scenes picturing a pizza delivery man on a scooter chasing a patrol led by Lieut. Stanisław Jankowski “Agaton” along Chłodna Street, and members of the Gustaw battalion watching today’s pedestrians walking cross Dąbrowski Square are taken from the book, Teraz'44 (44 Now), a collection of collages juxtaposing Warsaw Uprising of 1944 and 21-century images.

Thanks to Marcin Dziedzic, Małgorzata Koszelew and Arkadiusz Szajner touched the past. As part of the Teraz ’44 project, they found themselves in an insurgent photo alongside their relatives. Małgorzata rests her hand on the shoulder of her great-aunt Izabela Wilbik, (code name: “Iza”). Photographer Joachim Joachimczyk (code name: “Joachim”) captured the smile of the 16-year-old Iza, resting after evacuation through sewers from Warsaw’s Old Town on 1 September 1944, in the company of rifleman Tadeusz Roman (code name: “Kowalski”) and Jan Welt (code name: “Ulatowski”). Taken in a backyard of a house on Warecka Street, the photo is like a meeting with ghosts. Małgorzata Koszelew has never seen her pretty relative, who died shortly after the evacuation during the defence of Czerniaków (a district of Warsaw). And yet Koszelew says she has always known her great-aunt Izabela whose picture stood prominently displayed in her grandmother’s apartment and stories about Iza still abound in the family. 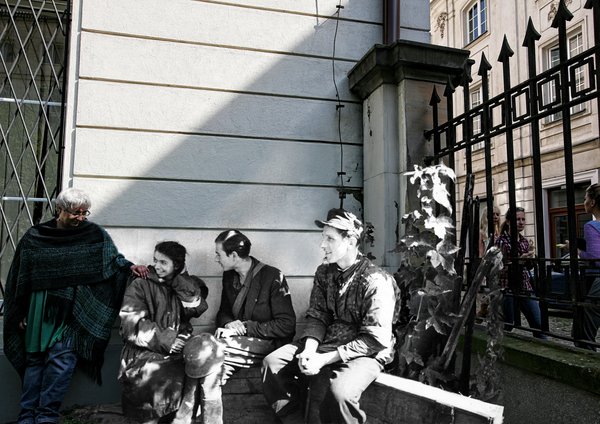 Like Małgorzata Koszelew, Arkadiusz Szajner was a bit uneasy when Marcin Dziedzic, the author of collages in Teraz ’44, suggested that he should pose as if resting his hand on his grandfather’s shoulder. In a photo dated 20 September 1944, senior rifleman Zdzisław Orzechowski (code name: “Gnome”) is wielding a Schmeisser and wearing a coat captured from the enemy. In the insurgent parlance, such clothes were said to be “still smelling of Germans.” Bogdan Borycki (code name: “Nowik”) is standing next to him on Bracka Street in front of the Jabłkowskis’ department store. In today’s version of the picture, Arkadiusz Szajner is accompanying his grandfather together with his wife Halina and sons Olgierd and Michał. “All the photos from the book exude magic because you can feel the spirits of the insurgents. But when it comes to these two, I allowed myself absolute magic. And people liked it. I asked them on Facebook to decide which photo should make it into the book, and they chose both,” Marcin Dziedzic tells Polska.pl.

A Polish studies graduate, journalist and slogans specialist, Dziedzic has worked on Teraz ’44 for two years. He began by posting online collages that combined Warsaw Uprising photos with scenes of modern life. He would superimpose modern-day buildings on black and white scenes of ruined Warsaw with cars and people talking on their mobiles and carrying groceries. A white Porsche parks in front of the ruins, while a city bus and a bike pass by. 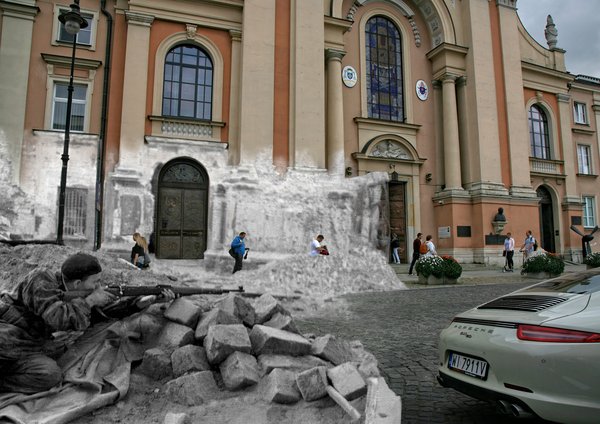 Dziedzic knew he wasn’t a pioneer. Jo Hedwig Teeuwisse, a Dutch historical consultant, had a similar idea before. As part of the Ghost of War project, she overlaid pictures of contemporary Dutch cities on photos of German soldiers. The same method was applied by the Russian photographer Sergey Larenkov. Yet, both projects lacked precision, a feature that’s so important to Dziedzic. Better results were achieved in the City of Phoenix, a Polish black and white project that only juxtaposed places – old ruins – and new buildings. Meanwhile, Marcin Dziedzic wanted his collages to show people – Warsaw Uprising heroes and its present-day inhabitants.

He discussed his ideas with the Warsaw Rising Museum’s Director Jan Ołdakowski, who guaranteed him access to the museum’s digital collections, Fototeka. Dziedzic could also tap into the museum staff’s expertise. He picked 44 photos and set out into the city. “I wanted to turn two worlds – one from the Warsaw Uprising days, the other modern – into one. I aimed at perfection or close to perfection. The way I tried to achieve this was by taking photographs from the same angle that the originals had been shoot,” he tells Polska.pl. Having tried repeatedly to capture the exact time of the day, he finally opted for a mobile app that showed the time a picture was taken 71 years ago using the angle of the sunrays. Now he only had to wait for the right weather conditions. “All it takes is astronomy, geography, and a bit of maths. I was running around the city with a camera, looking into my plan and trying to get the right shot,” he recounts.

He took the pictures in July and August, and processed them in February, mainly at night. He admits that it was fine and painstaking work. His publisher was delighted with the result, but said that a book would be more interesting than an album. 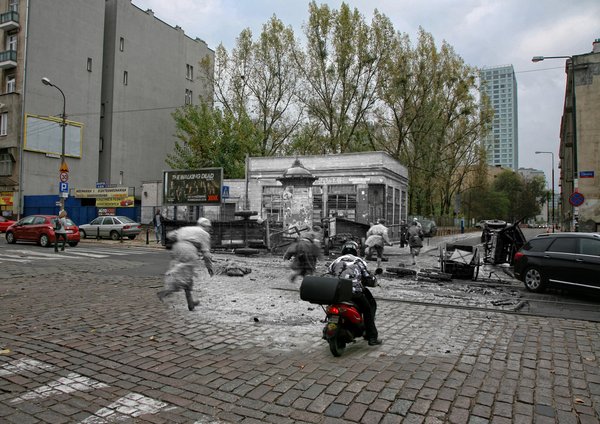 Dziedzic didn’t think he was up to the task of writing stories based on the pictures, so he asked Michał Wójcik, his long-time colleague from Radio Zet, a major Polish radio station. A historian by profession, Wójcik co-authored Made in Poland, a book-interview with the famous insurgent and subversion troops member Stanisław Lakiernik. “I cherish the memory of the insurgents, but I’m not a Warsaw Uprising freak. I don’t know enough about it to write a historical book. And Michał is a real buff of insurgent history. He will dig out books published by the insurgents of which 200 copies were printed, or even one-off manuscripts,” explains Marcin Dziedzic. His approach to the Uprising is completely different from that of the co-author of Teraz ’44. “We agree to disagree, which makes the book richer. Michał is on the same page with Stanisław Lakiernik, who questions the point of starting the struggle in the first place, whereas I don’t like speculations. When someone asks me whether the Uprising had to break out, I say yes – after all empirical evidence shows that it did. Though it was a disaster for the city and a hecatomb for its inhabitants, we can’t reverse it,” he says.

These two philosophies combined to create a ground-breaking book both in form and substance. For example, Michał Wójcik discovered an old communist-era newsreel, shown in a small Warsaw museum, featuring Wanda Lurie who witnessed the massacre perpetrated in the Warsaw district of Wola, and talks about mass executions of civilians at the Ursus works. She survived the mass execution because a bullet aimed at the back of her head wounded the nape of her neck and cheek. Her three children didn’t have so much luck. Two months after the massacre she gave birth to a son whom she named Mścisław (avenger in Polish). 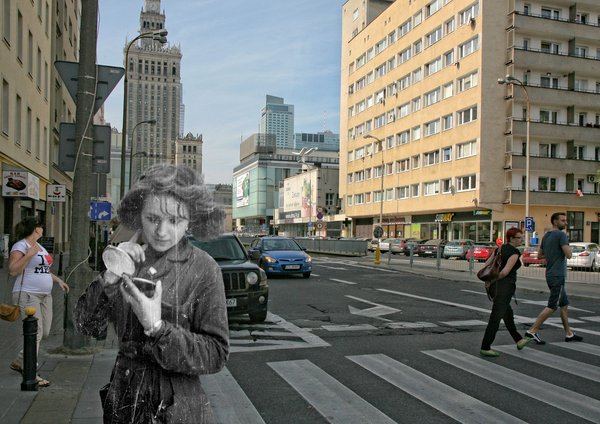 The book also contains some lighter stories, like the one about a nun who sat on a grenade that went off without hurting anyone.

Photos of young girls reveal some hitherto unknown faces of the Uprising. Iza Wilbik is not the only beautiful fighter Dziedzic transported into our times. Just as lovely is the Girl with the Mirror, whom Eugeniusz Lokajski (code name: “Brok”) captured against the background of bombed Zlota Street near Zgoda Street in north downtown in mid-September 1944. Grey buildings and a heap of rubble made way for a yellow block of flats, a glass department store, a blue Intercontinental hotel, and the Palace of Culture and Science. Nevertheless, the viewer’s attention is still drawn to this Warsaw girl looking at herself in a mirror. The same holds true for a nurse with a pinned-up hairstyle, photographed by Jerzy Chojnacki (code name:“Chojna”), against an overturned tramcar, part of a barricade in Miodowa Street. Wearing high-heeled sandals and a knee-length skirt, she is checking the contents of her medical bag, and could just as well feature in a session for one of today’s women’s magazines.

Marcin Dziedzic dedicated Teraz '44 to his wife who suffers from multiple sclerosis. The author donated his royalties to the Kindness is Paid Back Foundation that helps people who have this disease.