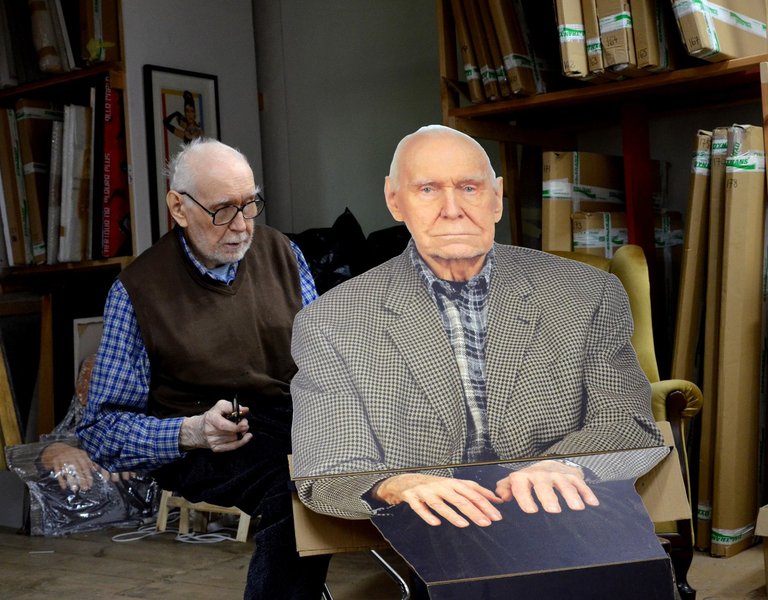 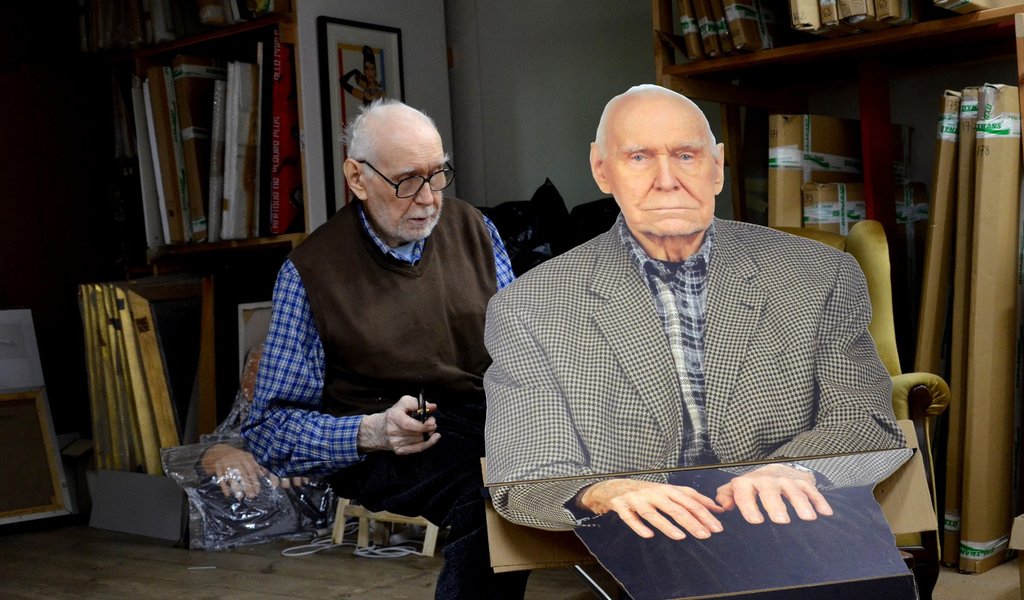 One of the founders of the Polish school of poster design and a leading representative of the Op-Art movement, Wojciech Fangor was a household name in 20th century Polish painting, poster art, sculpture and public art. He died on 25 October at the age of 93.

“Uncertainty seems to be closer to the truth than certainty…there has to be amazement, there has to be curiosity and there has to be an openness towards what the future will be bring,” Fangor said in a talk held in 2005 with Stefan Szydłowski, the curator of the "Wojciech Fangor" exhibition at the Stary Browar arts and business centre in Poznan. Fangor stayed true to his inquisitive nature throughout his career and this is one of the reasons he became a pioneer in his line of work.

Art historians like to say that Fangor’s work is the perfect material with which to teach the history of painting, as his pieces are testament to the different eras within which he lived. Fangor’s individual exhibition at the Guggenheim Museum in New York is another example of how his contributions to the world of painting have been acknowledged at the highest international level. He was also one of the most expensive Polish painters. In October 2015, his 1970 painting “M 58” was sold for 923,000 zloty, making it his most highly valued painting.

Born on 15 November 1922 in Warsaw, to a businessman father and pianist and poet mother, Fangor grew up in a well-to-do household and received a good education. He was first taught by governesses and private tutors. He then went on to receive instruction from the painter, Tadeusz Kozłowski, with whom he travelled across Europe to admire works of art. They visited Venice, Florence, Rome and Napoli and organised regular excursions to German and French museums. During the war, Fangor studied under famous painters Felicjan Szczesny Kowarski and Tadeusz Pruszkowski and he received his extramural degree at Warsaw’s Academy of Fine Arts in 1946.

From very early on, Fangor was inspired by the great works of some of the most famous painters of the 20th Century, including Matisse, Leger and Picasso. He made his own artistic debut in 1949 at the Club of Young Artists and Scientists, with an exhibition containing Cubist collages and portraits. In the 1950s, influenced by political events, he became fascinated by social realism. His 1950 piece “Figures”, portraying two workers next to an elegantly dressed woman, is one of Fangor’s most famous pieces of work from this time, alongside his “Korean Mother” created in 1951. According to art historians, Fangor broke away from this genre and two years later produced a poster for the film “The Walls of Malapaga,” helping set the foundation for the world-famous Polish poster school. He went on to paint over 90 posters by 1961.

In 1958 he created the art world’s first ever artistic ‘environment’ entitled “The Study of Space,” a multifaceted artistic installation set within a concrete space. The installation was created together with the architect Stanisław Zamecznik and was exhibited at Warsaw’s New Culture Salon. It was a result of earlier co-operation between Fangor and Zamecznik as well as other contemporary artists, including Oskar Hansen, Zbigniew Ichnatowicz and Jerzy Sołtan. “The exhibition contains several paintings of various formats arranged irregularly, causing overlapping spatial zones and creating a mood that is different from the mood of each image considered separately,” is how Fangor described his technique, applied for the first time in the world. 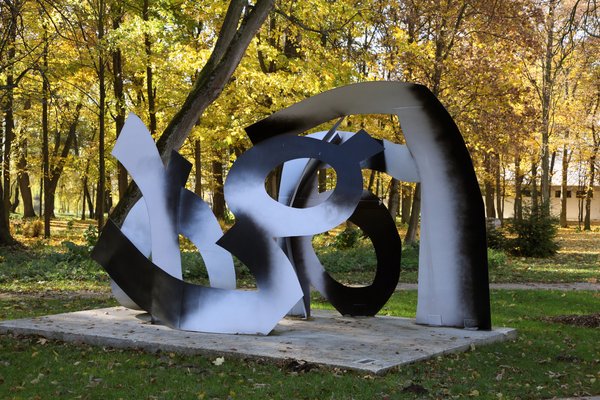 The 7 November date for the opening of the retrospective exhibition of sculptures, installations and spatial objects by Wojciech Fangor at the Centre of Polish Sculpture in Orońsko was scheduled before Fangor’s death. The exhibition will run until 6 January 2016 and will contain the artist’s work produced between 1948 and 2015. This will include graphic design projects for the Warsaw metro as well as his “Signature” series, from which one statue is located in a nearby park.

The Centre of Polish Sculpture in Orońsko was where Fangor displayed his famous “Mega-Exhibition – Exhibition of Exhibitions” in 2005, in which he focused on the relationship between the viewer and the items arranged in the exhibition. Fangor was a pioneer of art in public space.

In 1961, Fangor left Poland. For five years, he lived all over Europe – in Vienna, Paris, London and Berlin – before moving to the United States in 1966, where he stayed until 1988. He became famous internationally for his paintings depicting wheels, waves and amoeboid shapes painted between 1958 and 1973. Fangor painted some of his most defining pieces during his time in the United States, such as paintings from the series “Interface Space” (1973-76) and “Television Images” (1977-84), which according to experts helped usher in the critical art movement. Fangor was also the co-creator of high-level events – in 1974 he designed the scenography for Martha Graham’s ballet at the Mark Hellinger Theatre in New York and in 1980 he produced a massive landscape drawing – measuring 128 by 187 meters – for “Home to the Whale.” For the latter event, he used a huge pile of towels to produce whale silhouettes. He also took part in “The Responsible Eye”, a famous international exhibition held at the Museum of Modern Art in New York in 1965. Five years later, he had his own individual exhibition at New York’s Guggenheim Museum, where his op-art dominated paintings were on display. 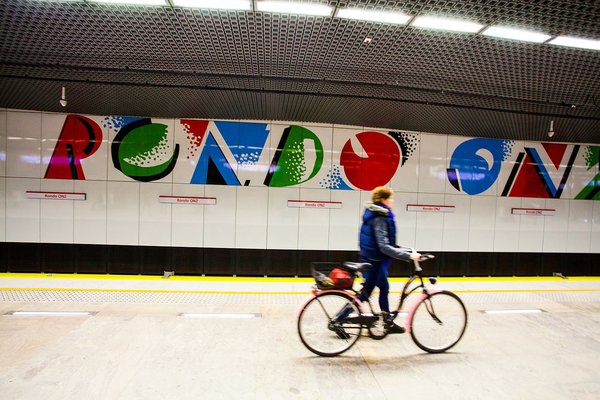 As an 80 year-old, Fangor once again changed his artistic profile, creating palimpsest paintings, a creative interpretation of his previous works. In 2005, he organised his “Exhibition’s exhibition” at the Centre of Polish Sculpture in Oronsko. Three years later, Fangor’s “Signature” sculpture was erected in Oronsko’s main park. In 2012, to celebrate Fangor’s 90th birthday, a big retrospective exhibition was set up in his honour at Krakow’s National Museum.

Fangor created art right until his last days, always happy to take on projects dealing with spatial planning, for example the design of the second line of the Warsaw metro. His paintings and sculptures are today among the most sought after works of art produced by a Polish artist. 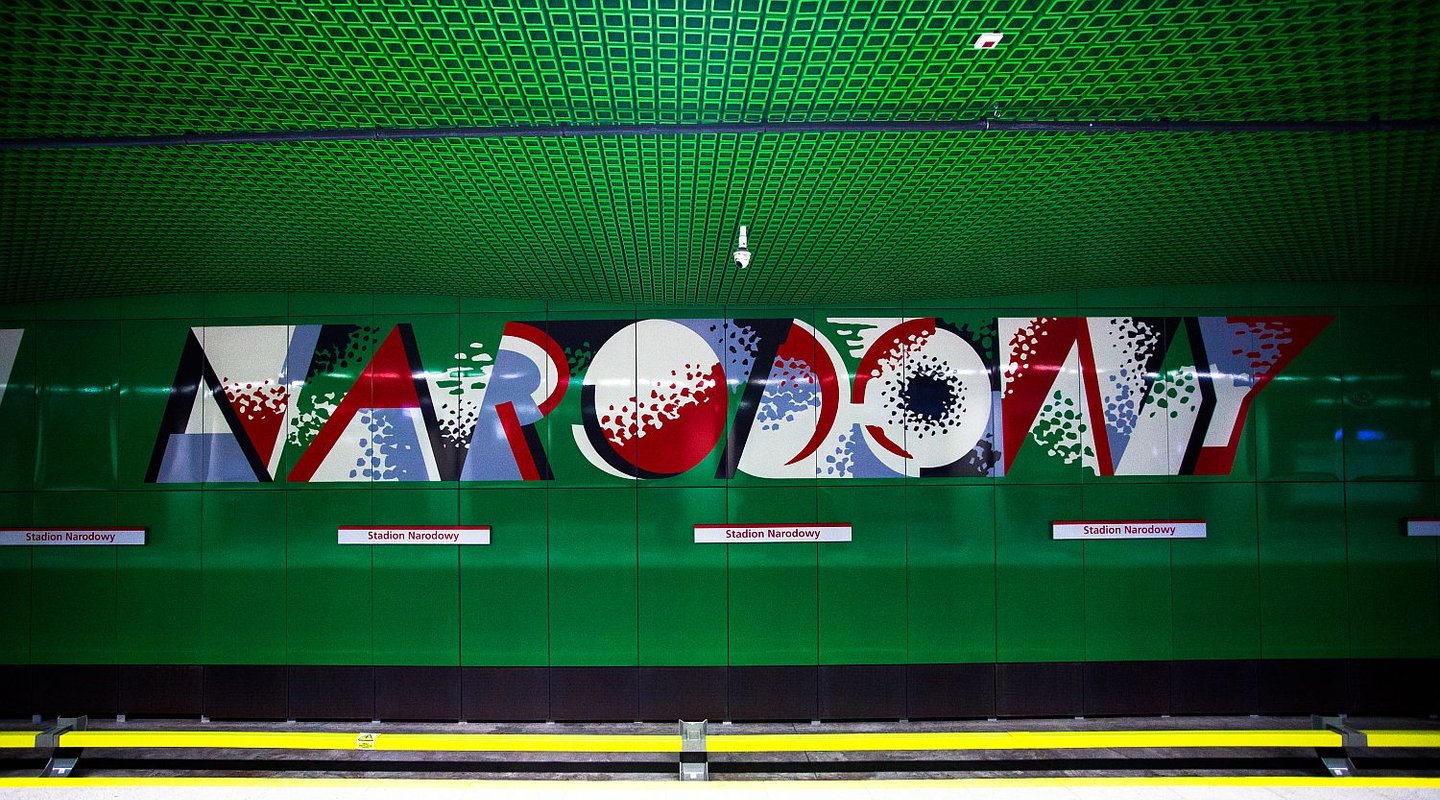 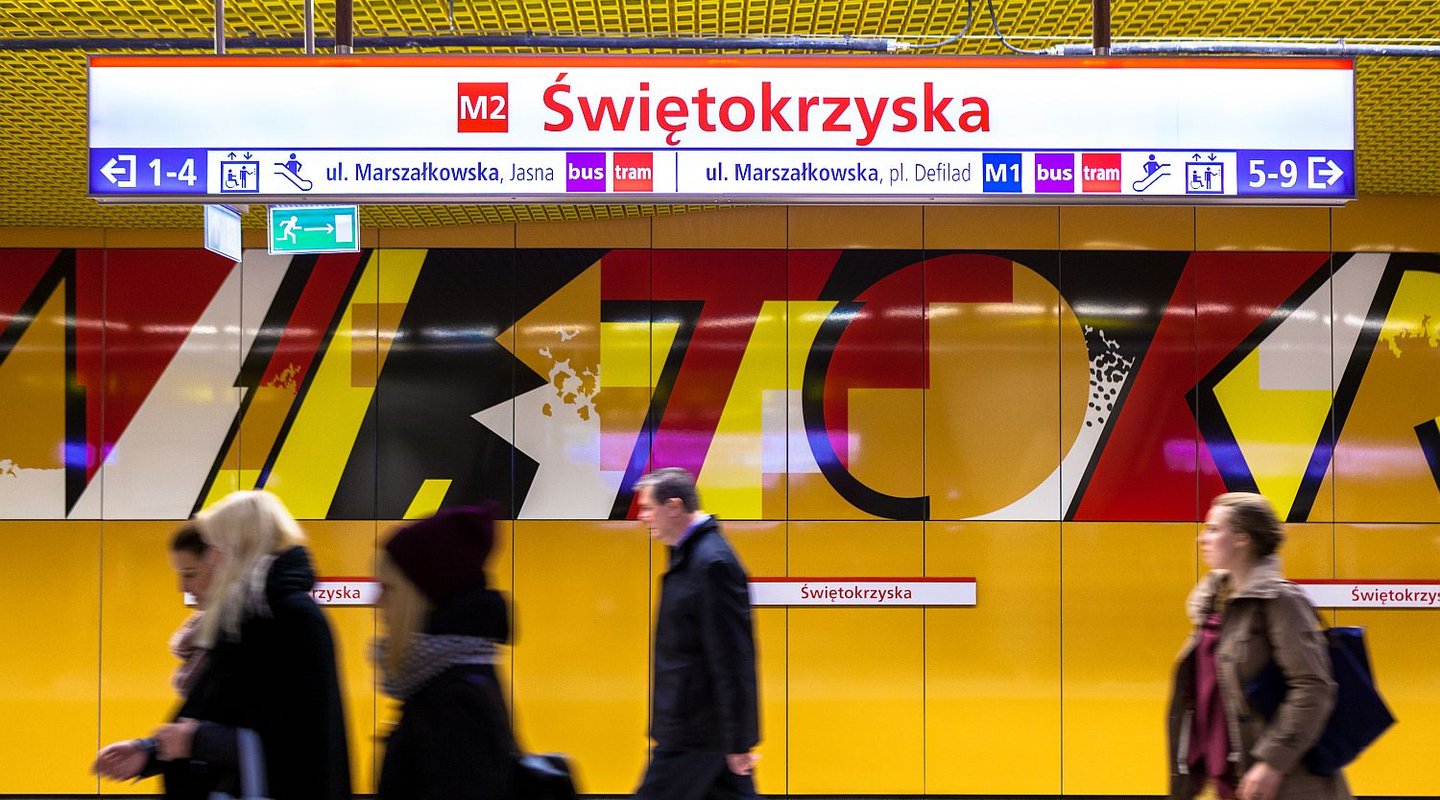 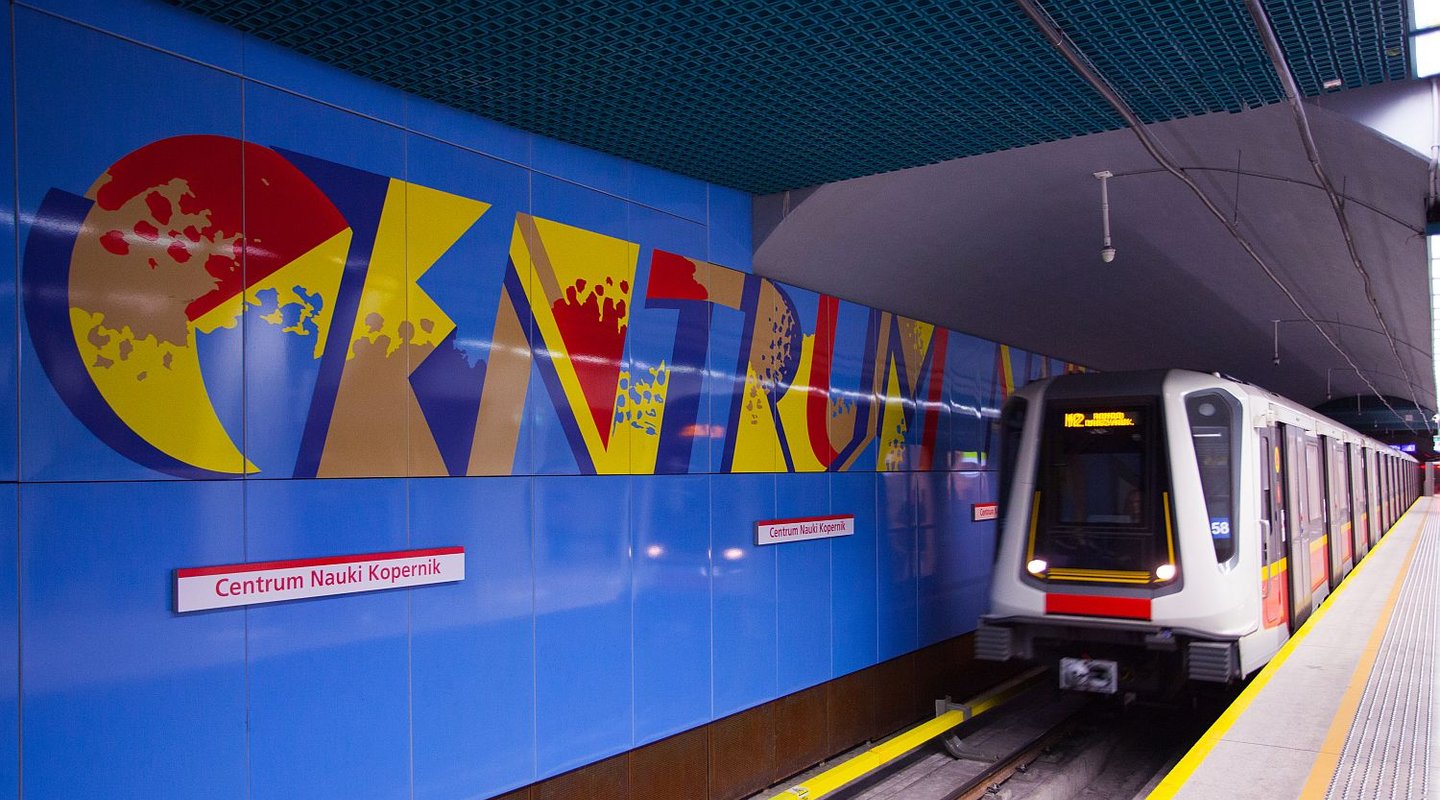 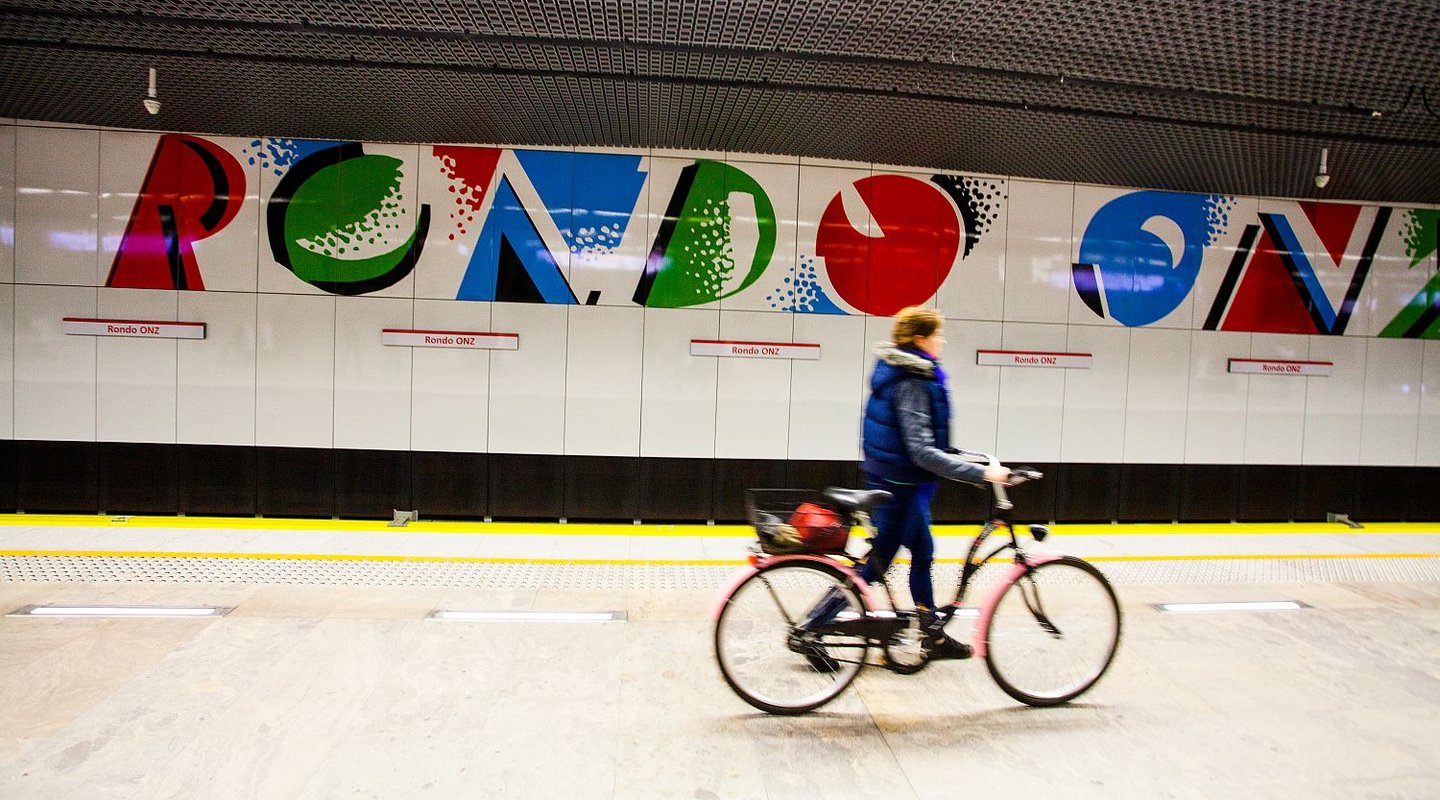