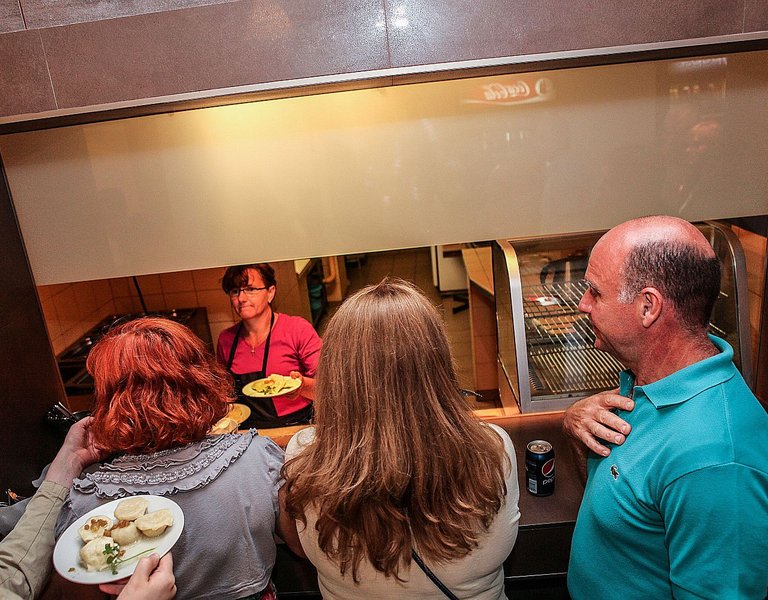 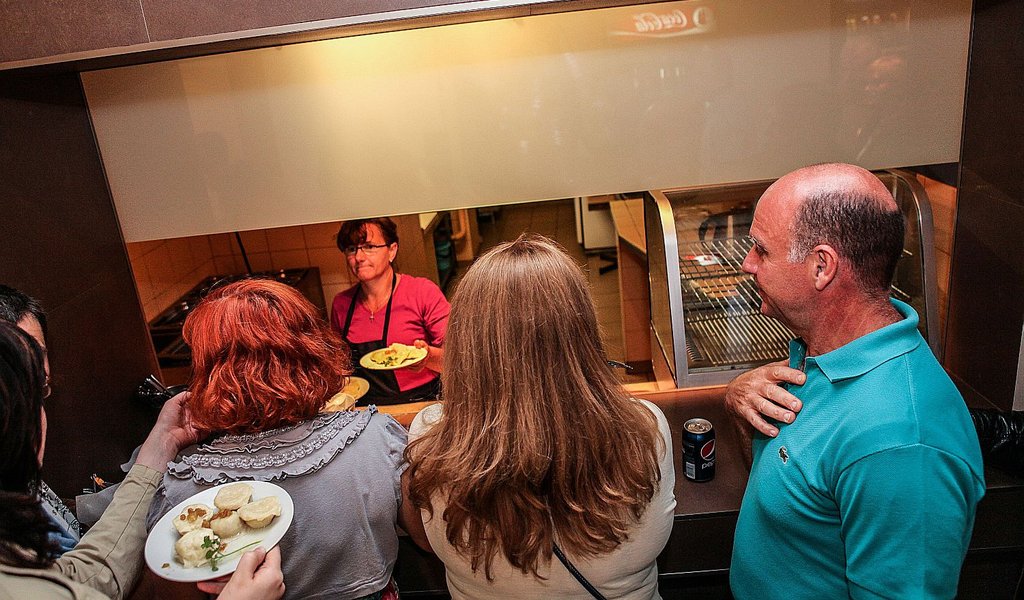 Milk bars: some things never go out of fashion

They offer pork chops, potato dumplings and pancakes and attract passers-by with their unpretentious design and low prices. Milk bars are an excellent place to taste genuine Polish cuisine.

Much like Italian osterias, Poland’s milk bars are always packed with diners, no matter where they are located – on a popular high-street or hidden away on a back alley rarely visited by tourists.

They do not tempt you in with flashy signs or fancy decorations, but gourmets of local dishes will always eat there. Substantially cheaper than restaurants offering traditional Polish cuisine in the de luxe version, milk bars have outlived communism as well as the early years of capitalism, when only the poor would eat there. 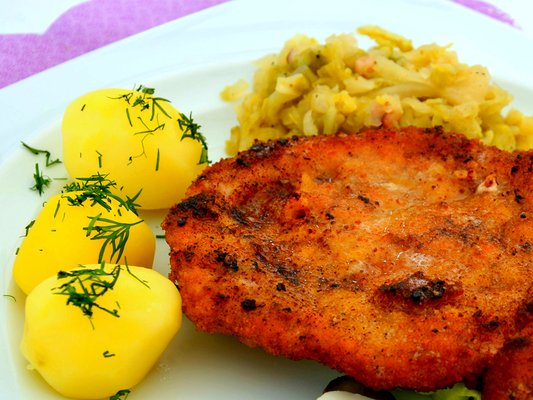 Pork chop with cabbage and potatoes:

A coated chop of pork loin, reminiscent of a Wiener schnitzel, coated with an egg and breadcrumbs, and then fried in lard. It’s served with potato puree or boiled potatoes and stir-fried cabbage or sauerkraut and carrot salad.

Croquettes are a non-sweet version of pancakes, rolled in a different way.One has to coat them with breadcrumbs before frying them again. Most often served with unsweet beetroot soup. You can choose either a meat or a vegetarian version –filled with finely chopped mushrooms or cabbage stir-fried with finely chopped onion.

“They represent one of the few areas, where people from all social layers meet on equal terms. Executives with 6-digit salaries sit next to persons on 3-digit allowances, and all of them have access to healthy food,” evaluates Aleksandar Ćirlić from “Prasowy” bar – the most famous “milky” bar in the capital. Anna Gidyńska, a culinary blogger and the author of the online service jestpieknie.pl, agrees with him: “They suit both students and corporate employees, independent of whether the de riguer dish in their corporation is currently sushi, burgers or steak made out of prime Argentinian beef. The point is all of them prefer to eat something unsophisticated, proven and reliable, corresponding to the so-called domestic cuisine. Even if the presentation might not always be aesthetically pleasing and the over-salted cucumbers might make you want to down three cups of compote, the dishes are all hearty and consist of a healthy portion of vegetables.

Whatever one’s opinion of these establishments I’ve not yet heard of anyone having got a sick stomach after eating in a milk bar” she explains in an interview with Polska.pl. 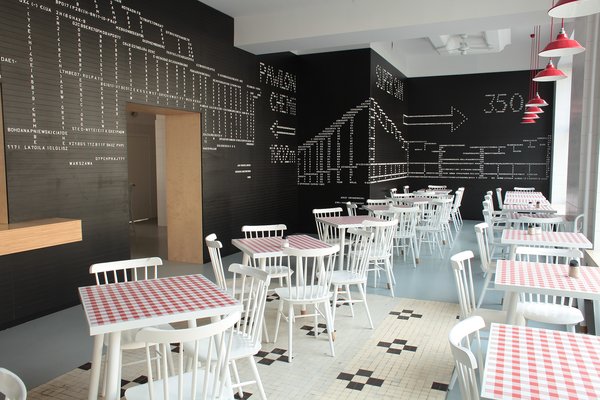 The low prices at milk bars attract locals and tourists alike. A plate of a nutritious Polish soup costs even as little as PLN 1.50, dumplings or pancakes: PLN 6, whereas a cutlet or chop: between PLN 4 and 8. Thus you can eat a whole lunch for as little as PLN 10. And this is also the way it is in most milk bars throughout Poland, although in cheaper cities, e.g. in Wrocław, one can eat soup for as little as 70 groszy, pancakes: for PLN 2.30, and cutlets or chops for PLN 4, although the sizes of dishes might at times be smaller. These prices are offered at “Jacek i Agatka,” a milk bar in operation for over three generations, located near the Town Hall and the University of Wroclaw. The owners proudly proclaim that “nothing has changed” since the days that the bar was first opened.

In the “Turystyczny” bar in Gdansk, which has been operating since 1956, you can have 100 grams of pork knuckle for as little as PLN 4.90, a chicken’s thigh for PLN 2.70, and a beef collop – for PLN 8.00. This milk bar was even mentioned in “The Guardian”. Maciej Nowak, a renowned Polish culinary critic, wrote enthusiastically about the sense of familiarity at the establishment, with cooks greeting him with a wave while standing over their pots. 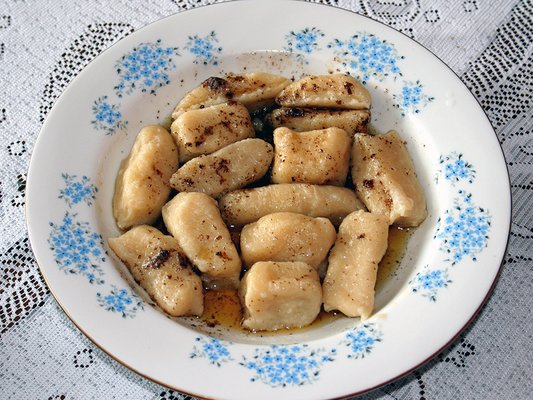 Made of cottage cheese, eggs and flour and boiled in lightly salted water, they are called “lazy” (leniwe), since they are easy to knead and you need not shape them into dumplings. In fact they are a type of dumplings served with cream and sugar, with breadcrumbs stir-fried in butter, sometimes also with cinnamon.

Slightly more fluffy than the French crepes, but thinner than American pancakes, Polish pancakes are fried in butter or pork fat. They are then either folded into triangles or rolled up. Traditional ones are served with slightly sweetened cottage cheese or cheese mixed with an egg, and are then poured with cream and sprinkled with sugar.

An additional advantage of such bars is the way in which they preserve local culinary traditions. In Warsaw’s Northern Praga (Praga Północ) district, bars such as “Stalowy” (on Stalowa Street”) serve the staple dish of potato dumplings, considered to be typical for Warsaw. In earlier days, the dish could be bought at the famous Różycki Bazar (Różycki Market Place) which has since closed down.)

At the “Neptun” bar in Gdańsk one can have so-called zeppelins: a typical food in North-Eastern Poland, i.e., large potato dumplings stuffed with meat, or a soup of swede, very common in the Kashubian cuisine, also called “zupa z żeltich wreczi” in Polish. The prime location of milk bars in the Tri-city area makes it very easy for tourists to get their milk bar fix: “From a tourist’s perspective, both are in excellent locations: at the very heart of the Gdansk Old Town, near the most famous routes. It is very likely that you’ll pass by them anyway,” says Arkadiusz Cyman, a Gdynia resident and graduate of the University of Gdańsk, who lived off Kashubian delicacies throughout his studies. 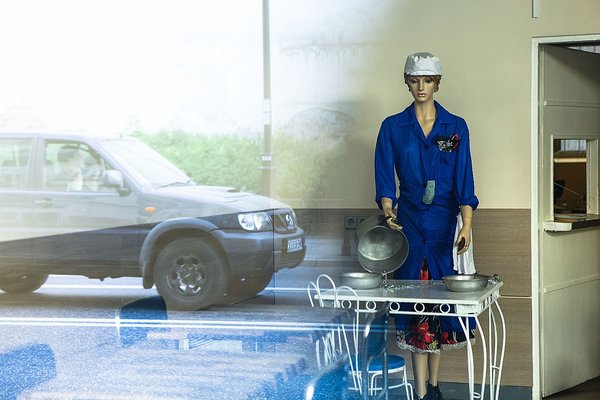 Milk bars owe much of their popularity to people’s sentimental attachment to the period of Polish People’s Republic (PRL), or maybe even more due to the fact that it’s in vogue to recollect those onerous times by people who do not remember them well. Coming to age in a free Poland, Poles currently in their 20s and early 30s visit  “milky” bars lured by a scene from the “Miś” (Bear) film by Stanisław Bareja, a cult film mocking the absurdities of life in Communist Poland. They want to check out whether plates in milk bars are actually fastened to tables with nails, and cutlery pinned by an aluminum chain. Many also have an image in their head of a cook dishing out food with a large ladle straight from a bucket.

It’s often the case that the reality lives up to their expectations, since although fastened tables and cutlery were a joke born out of a fear of thefts, compote is in fact still poured into glasses from a bucket.

Those visiting the social-realist Krakow Nowa Huta estate are often guided towards the legendary “Centralny” or “Północny” bar, where delighted Poles, but also Irishmen and Americans, Germans or Britons, eat żurek (a soup made from fermented rye flour) with pressed potatoes.

The Communist-era interiors and local style of milk bars has inspired other new establishments, such as the Poznanian “Pyra Bar” which also has a branch in Gdańsk, to emulate the old, retro feel of “milky bars.”  unkempt

Tourists visiting these establishments will be served a “pyra z gzikiem”, i.e., a big potato (“pyra” in the Poznanian dialect) with adequately spiced cottage cheese, as well as “plyndze” (potato pancakes in Poznanian dialect), or grey pasta with cabbage, characteristic of Greater Poland. On offer are local dishes and their contemporary, cosmopolitan versions (e.g. potato pancakes with Greek cucumber and yogurt sauce), served on white plates with Communist-era style patterns emblazoned on them. Compote as well as tea or coffee served in cups without, popular in the 1980s, are also offered to guests.

According to Anna Gidyńska, a culinary blogger behind jestpieknie.pl, milk bars in Poland are currently experiencing their second or even third wave of popularity.

“When I was a child, milk bars were a permanent element of the landscape, and were visited by those who could not afford to go to “Wierzynek” (a luxurious Cracow restaurant at the Rynek Główny – the Main Town Square). Afterwards, mainly students ate at milk bars, and some of them still maintain this habit, such as my aunt, who works at Warsaw University. These days it’s even chic for CEOs of big companies to eat there,” Gidyńska points out. She goes on to say that even the most zealous gourmets sometimes prefer a pork chop in the original version, with no flamboyant changes and additives . This type of simple, appetizing food is something that is unlikely to be served at more refined restaurants. 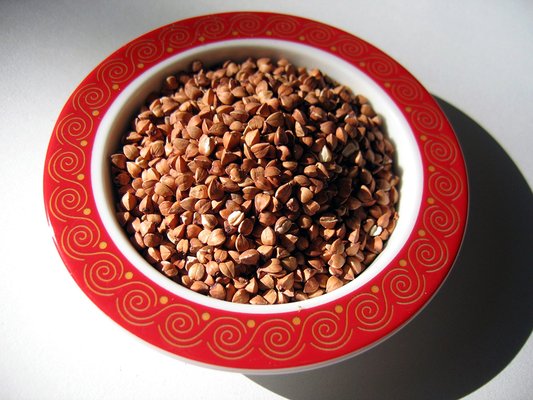 One of the most popular additions to dishes in milk bars, often preferred over potatoes. Highly valued in folk medicine as a warming food, it’s rich in protein, vitamins and minerals. It’s usually seasoned with melted lard and pork scratchings.

Prepared most often on the base of minced raw pork neck with a raw egg and a roll it is then soaked in water and squeezed, finely. Finely chopped onion and freshly chopped dill or parsley , is added before frying in not very deep lard or oil. According to tradition, it's served with potatoes and salad, preferably with fresh cucumber salad, a fresh cucumber cut into thin slices with slightly sweetened cream.