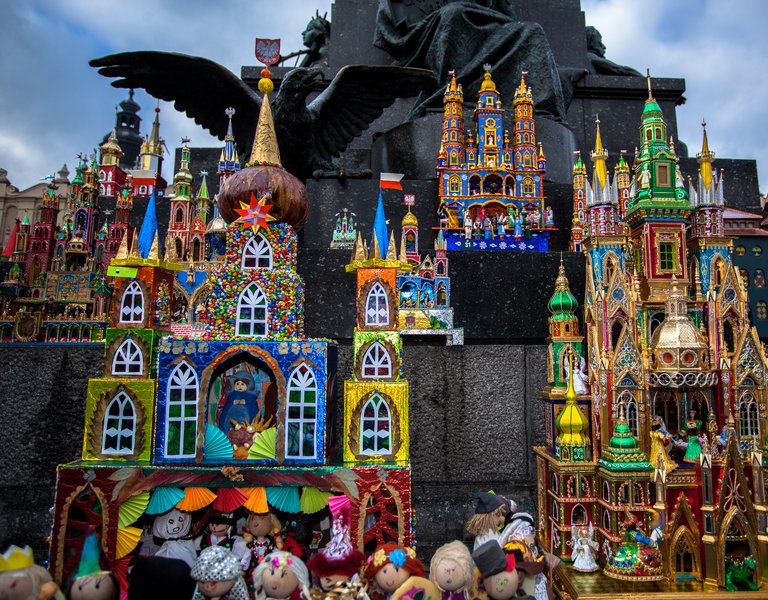 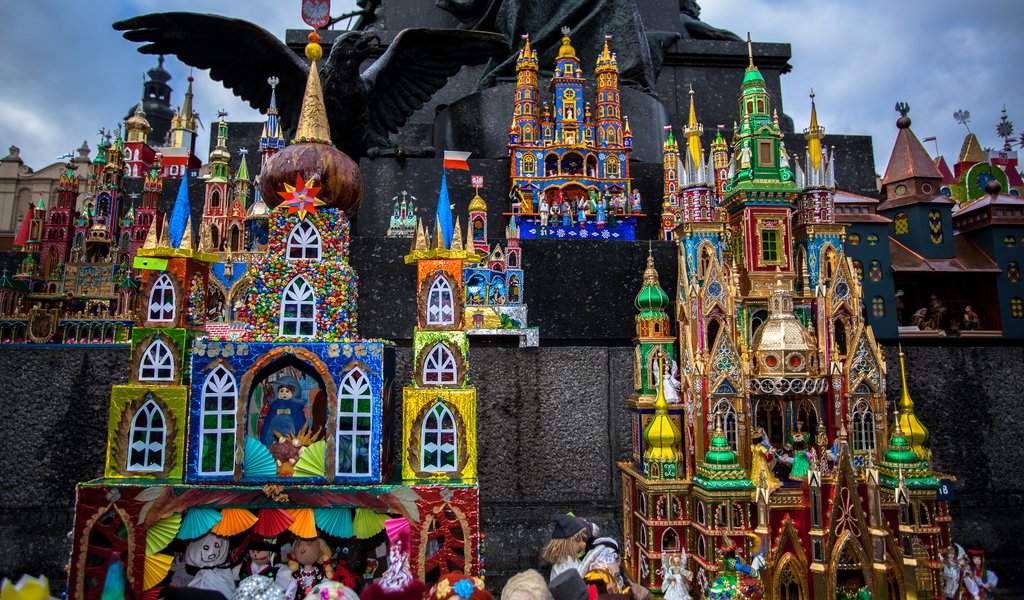 The Holy Family in the company of the Wawel Dragon against the backdrop of St. Mary’s Church are permanent features of Krakow’s crèches.

Every year, crèche makers swarm to Krakow’s Market Square on the first Thursday of December at 10.00 am. For two hours, they exhibit their work on the steps of the Adam Mickiewicz monument, inviting feedback from onlookers. By noon, to the sound of public applause, Krakow will have chosen its favourites and start parading them around the square in a procession led by a Krakus holding a great star, the symbol of carollers. The procession will lead to the Krzysztofory Palace, were a jury will select the most beautiful crèches in four size categories: large, medium, small and miniature, and in two age categories: children plus young people and seniors (over 18 year old). All works will be shown at Post-Competition Exhibition of Krakow Crèches.

Competition is always tough. Maciej Moszew, who had entered it 65 times, will present his miniature crèche. Guiding by the rules of the contest, his crèche will allude to Krakow’s architecture and include famous city folklore and legendary figures: the Lajkonik, a man and a woman dressed in traditional Krakow attire and the Wawel Dragon. Crèches have to display elements that refer to Krakow’s past and present. 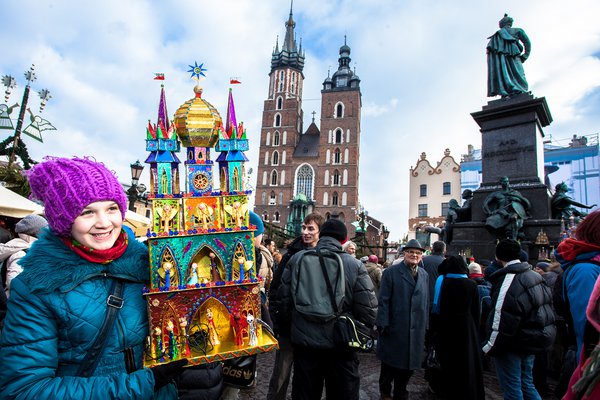 “More women are making crèches and displaying their art work. This has brought a fresh element to the art of crèche-making, which for years had been dominated by men who passed it from father to son,” Dr. Małgorzata Kwiecińska, assistant custodian of Krakow Folklore and Tradition of Krakow Historical Museum, which has been organising the contest since 1946, told Polska.pl. She said that crèches made by beginners proudly compete against works by more experienced entrants. “I have been making crèches since I was 7 years old and for the past five years have competed in the senior category. As a junior, I had received top prizes almost every time. Now I am happy if I get third place or an honourable mention. Competition among seniors is much tougher,” admits 25-year-old Katarzyna Radzka to Polska.pl.

Not only young entrants devote their entire free time to crèche-making. Maciej Moszew, a master of miniature crèches, spends about a thousand hours on each project, which is 10-12 hours a day for three months. His 65th crèche will be different from the others, but just like Katarzyna Radzka, he does not want to talk about it. “The main motif remains a secret until the very last moment. Artisans do not want to disclose it even to us, even though they often consult us for details,” says Dr. Małgorzata Kwiecińska. Over the last years, crèches has evolved quite a bit. “In the past, they were works of folk art. Today, they are made with our competition in mind,” admits Dr. Kwiecińska. Their form has been changing over the last dozen or so years. Now they are more richly ornamented, have more lights and figures are moved by state-of-the art mechanisms.