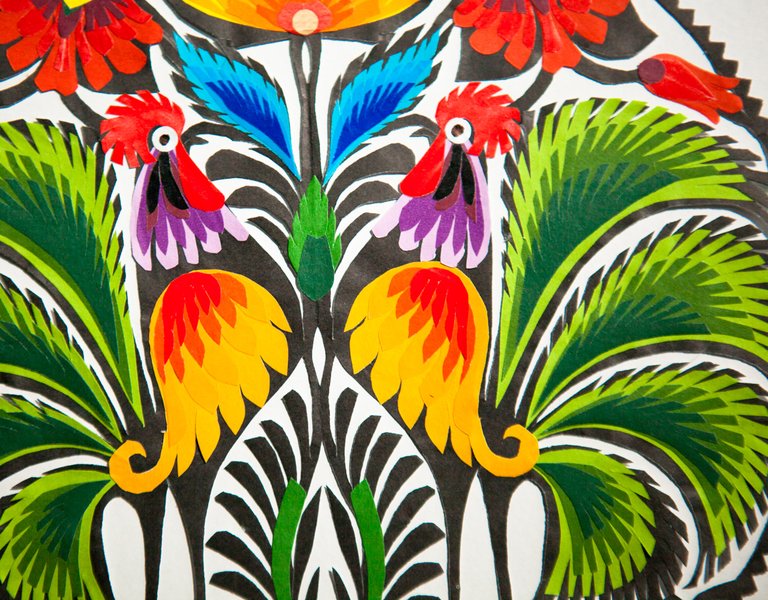 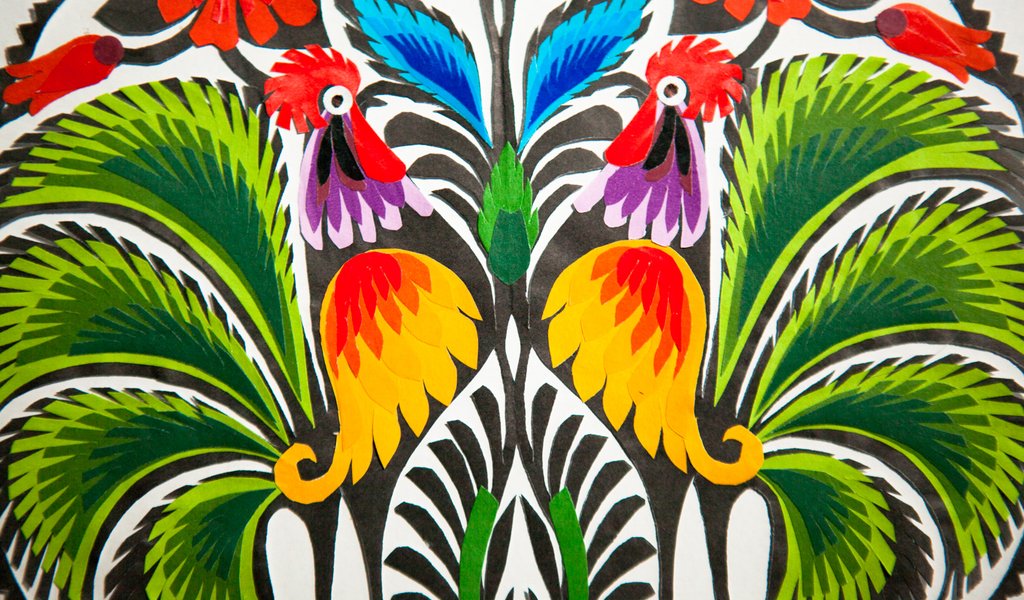 Lowicz paper cut-outs are one of the most remarkable phenomena in Polish folk art. They are ideally suited as an original gift idea. The Lowicz designs are also used in Christmas decorations.

Since the 19th century, paper cut-outs have adorned peasant cottages belonging to Księżacy, the inhabitants of the former duchy of Lowicz (the area that now comprises of Lowicz and Skierniewice). “The art of cutting paper started to flourish with the import of coloured, glossy paper from the paper mill in Konstancin-Jeziorna by the neighbouring villages,” says Marianna Narewska, an ethnographer and assistant at the Lowicz Museum. 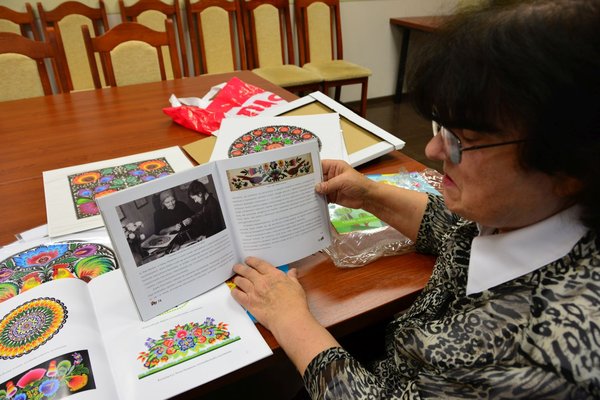 There are three basic forms of paper cut-outs: horizontal rectangular kodra, round gwiozda (similar to a snowflake, gwiazdka in Polish, hence the name), and tasiemka, made of two elongated strips. Recurring motifs include flowers, images of rural life and birds – mostly roosters and peacocks with rainbow coloured tails, facing each other. At the beginning of the 20th century, tourism became an additional stimulus for the development of the art of paper cutting. To cater to the demand of visitors from the town, local women started producing intricate openwork gwiozdas of perfect symmetry, finished with tiny serrations, which still are most popular.

To cut paper, sheep shears made by a blacksmith were used. “At that time there was simply nothing else,” explains Marianna Narewska. “Paper cut artists would inherit them from generation to generation and would get used to them, even though to us they may seem big and bulky.” 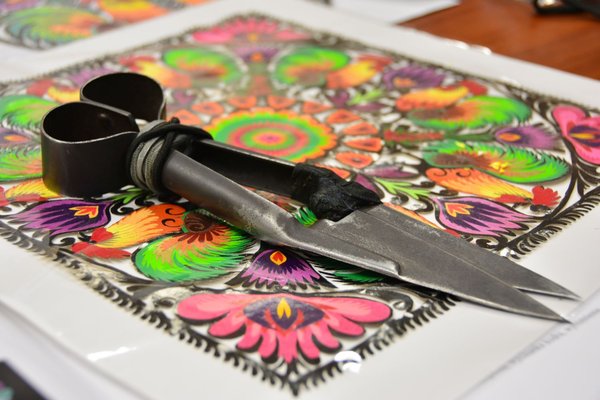 “I make paper cuts with my grandma’s sheep shears,” says Maria Stachnal. “They are well over 100 years old. I always have them with me, I don’t even let them be sharpened. With them, you can cut everything with great precision.” It is hard to believe that such a heavy and massive tool one can create forms as delicate as lace. “Even if I wanted to, I wouldn’t be able to cut with other scissors,” adds Henryka Lus.

Both women come from families famous for their paper cuts. They learnt the profession from their grandmothers, aunts and mothers and spent several decades working in the Sztuka Łowicka Folk Arts and Crafts Cooperative, now long closed. In socialist Poland, folk art experienced a renaissance, as it went hand in hand with the reigning ideology. “We worked at nights, helped by families and neighbours, just to meet the orders,” Maria and Henryka recall. With exhibitions, contests and folk art reviews, both in Poland and abroad, paper cut artists ceased to be anonymous and became acclaimed folk artists. “I visited half the world thanks to these shears,” says Maria Stachnal. 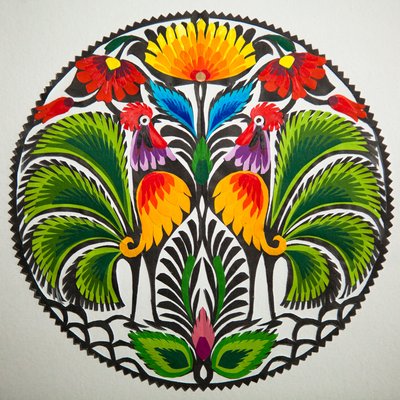 Poland’s biggest collection of Lowicz-style paper cuts is on display in the Lowicz Museum (containing around 2,500 exhibits). The museum also hosts a reconstruction of a typical peasant chamber from the Lowicz area, decorated with paper cuts. Decorations were not put (together) randomly; they used to have their fixed places: on ceiling beams, between windows and sacred images. They would be changed for Christmas and Easter, after a thorough cleaning and whitewashing of the walls.

The chronological order of the exhibition makes it possible to follow the evolution of paper cuts over nearly 150 years, from very simple forms to multi-coloured and multi-layered compositions of elaborate ornamentation, put together with rye flour glue. The oldest paper cut dates back to 1873 and shows stylized figures stuck on a strip of white paper. A kodra from 1910 is another unique exhibit, featuring two long-maned lions, not a common motif for a paper cut. Kodras would often be covered with images of peacocks, bred by the local gentry on their estates, which is where, according to Maria Stachnal, paper cut artists would see them. There are also genre kodras that portray a chronicle of Lowicz countryside life, so beautiful that you cannot take your eyes off them. They include images of wedding processions, musicians sawing away on their fiddles, a mother presenting her baby for baptism, horses pulling harrows, women whitewashing cottages and watering flowers using watering cans, and men digging over gardens. The figures wear striped costumes, typical of the Lowicz area, that buzz with colours. The smallest details are cut out with great precision. 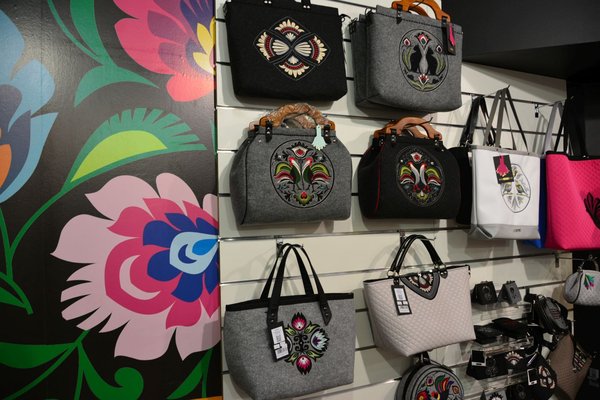 At first sight paper cuts may all look the same, but in fact each one is unique. “In the past, the artists wouldn’t sign their works. Today, they require their copyrights to be respected,” says Magdalena Bartosiewicz, an ethnographer and custodian at the Lowicz Museum.

“The way of cutting, the shapes of flowers, the colours vary from one artist to another,” explains Henryka Lus. “As we know each other, we can easily tell who cut what.” “I’ve never done two identical paper cuts,” confirms Maria Stachnal. “Sometimes I see patterns in my dreams, and sometimes I get inspired by nature.”

Asked about her favourite motif, she answers without hestitation: the rooster. “I rarely cut out other birds, and if I do, I later convert them into roosters. I make a green tail and add some matt golden colour.”

Paper cuts no longer adorn peasant cottages, but they do have their place in museums, private collections, fashion and design including fantastic felt bags with Lowicz folk art motifs, T-shirts, pillows, cases for glasses and cell phones, notebooks, bookmarks, etc.). “Łowicz-style paper cuts never go out of fashion, because they are simply beautiful,” says Marianna Narewska. 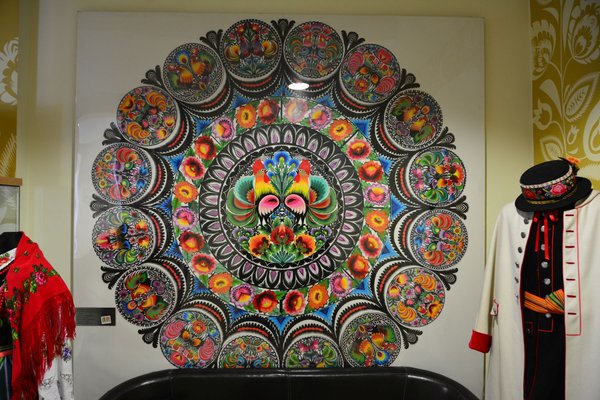 The biggest paper cut, a two-metre diameter gwiozda, is on display in the Culture, Tourism and Lowicz Area Promotion Centre at Stary Rynek Street 17 in Lowicz. It was created by Stefania Borkowska, Henryka Lus, Helena Miazek, Maria Stachnal and Wiesława Wojda.

The most distinguished folk artists, including paper cut artists, have their Aleja Gwiozd (a pun on “Aleja gwiazd” - Walk of Fame) in Lowicz, with gwiozdy on tempered glass built into the pavement.

Księżacy are renowned for their rich and original folk culture (paper cuts, colourful striped costumes, embroidery, weaving, pottery, sculpture), made famous by Wladyslaw Stanislaw Reymont in his novel The Peasants, for which he received a Nobel Prize for Literature in 1924.