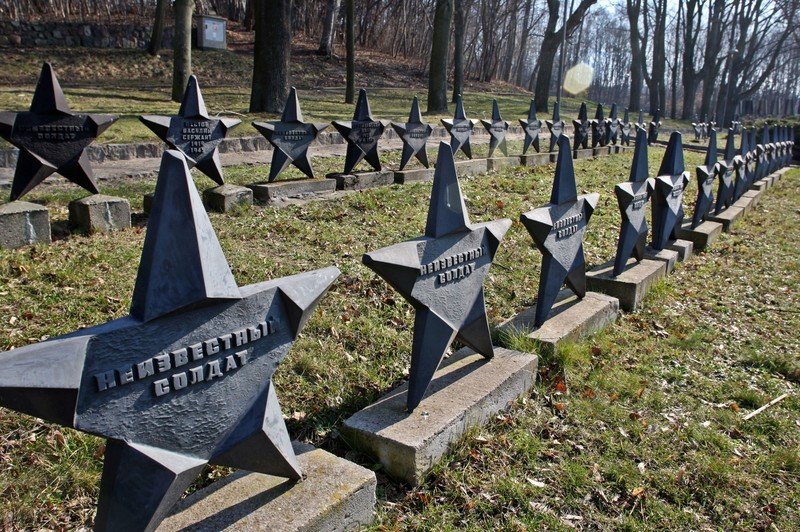 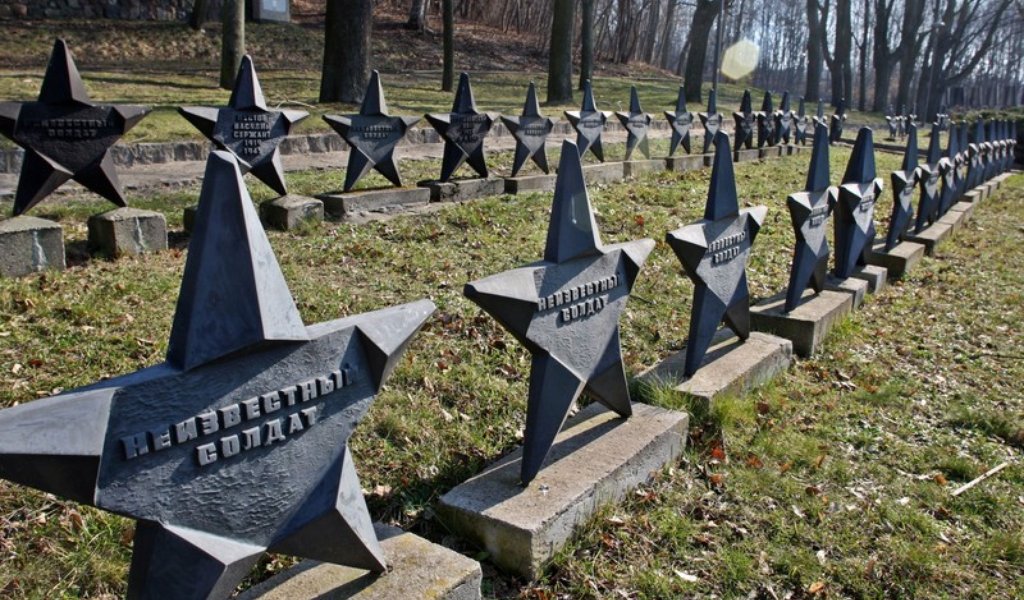 The dead and fallen deserve respect

In Poland there are 1,875 cemeteries and graveyards of those fallen since the times of the Napoleonic Wars and of Russian and Soviet soldiers up to time of the Second World War. Of this number, 718 are burial grounds of Red Army soldiers, who had fallen and died in 1941–1945. The total number of those buried is about 1.3 million persons. 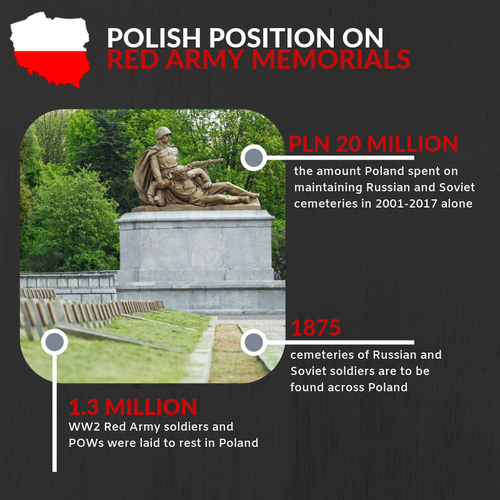 Of this number, around 800 thousand are prisoners-of-war who died in German camps, and over 500 thousand are soldiers who died fighting the Germans in 1944–1945 within Poland’s current borders.

Poland and Poles have always been respectful of the dead and places of their burial. It is in this spirit that the Polish State has taken every effort to care for the graves of those who usually cannot be visited by their close ones. In 2001–2017 alone, the Polish government spent almost PLN 20 million (around USD 5 million) on maintenance and conservation of Russian memorial and burial sites. The publication under this article documents the work done by the Polish side, and also shows the scale of the phenomenon and the variety of the places of burial, both geographical and aesthetic.

Monument is not a cemetery

In Poland a clear difference is made between the notion of a cemetery and that of a monument. A cemetery is a place of the actual burial, where someone’s earthly remains are laid to rest and for this reason it deserves special respect. A monument is a place or an object of symbolic significance which expresses the nation’s collective memory.

There are many places in our country where symbolic monuments dedicated to the Red Army that are not associated with places of burial of soldiers are situated. These monuments, in their substance and form of expression, were intended to honour the communist ideology, often resorting to communist symbols. Theirs is a presence that was forced and now is flagrant in light of the truth about World War Two and Stalin’s negative role, both in Poland and Russia. This assessment is not altered by the fact that even though the Soviet Union ended World War Two on the side of the Allies as an ally of Poland, contributing to the victory over the Third Reich, earlier it had violated its commitments towards our country: 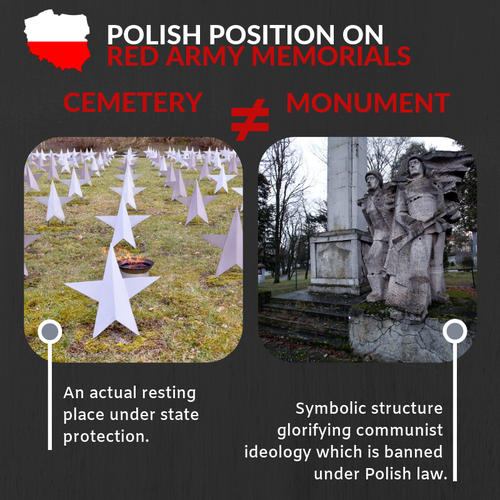 For this and other reasons, Poland enacted a law that orders that these types of monuments, which are symbols of the communist system, be pulled down. The dismantling is always done within the limits of customary norms and procedures. However, since Poland regained its full sovereignty in 1989, not one cemetery of Russian and Soviet soldiers has been dismantled. Moreover, because of special respect for places of burial, it was decided that monuments which constitute an integral element of a cemetery will be preserved and will not be pulled down.

Dialogue and frankness as a response to difficult history

Poland’s difficult history and its outcomes which continue to weight on our relations with Russia are a challenge – we want to address them in the spirit of peace and dialogue. Consequently, as a state and as a nation with centuries-old history, we believe that it is our duty to care for the graves of those who died and fell on our land. At the same time, we want to build a vision of our history based on frankness and historical truth – the inalienable right of any nation. We strongly believe that only this approach can save the world from new conflicts which will have tragic consequences in the future.