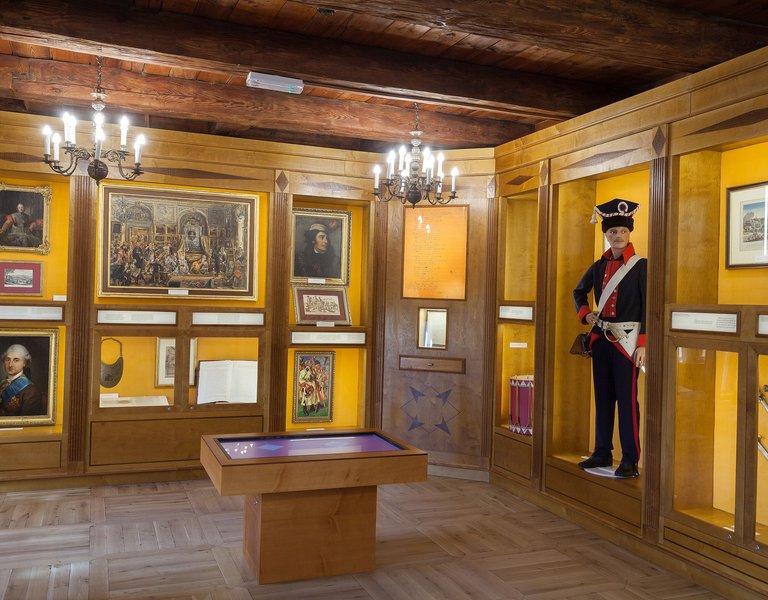 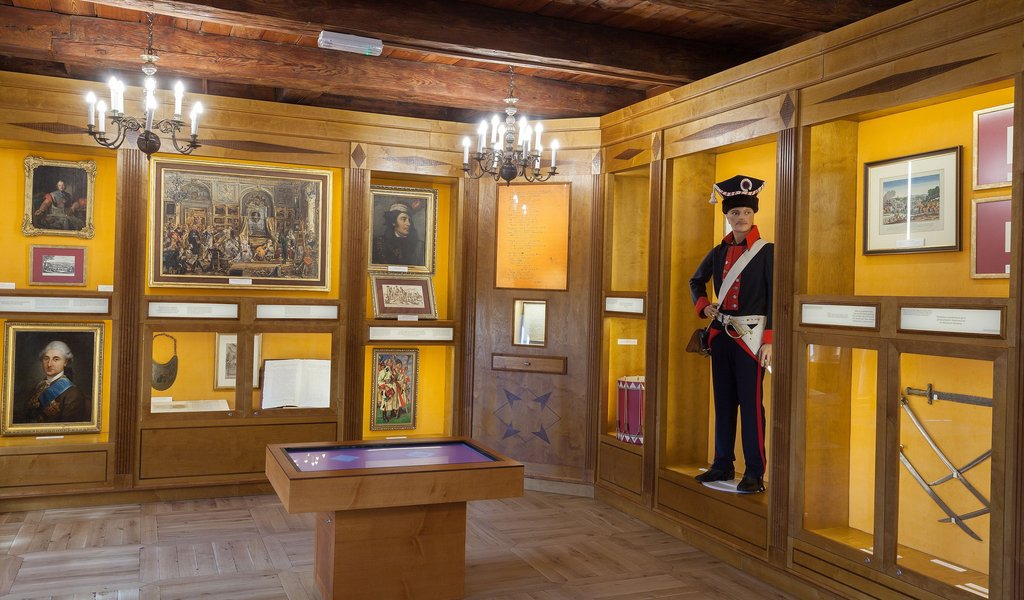 Anthem at the museum

You can hear Dąbrowski's Mazurka played according to a nineteenth-century harmony or performed by the folk musical group Trebunie Tutki at the Museum of the National Anthem in Będomin. It is probably the only museum in the world devoted solely to a country's anthem.

“It is hard to avoid boredom and pathos with such a serious subject. Thanks to modern arrangements of the anthem and its creative adaptations from the 80s – the Solidarity era, people leave the museum not only with knowledge, but also with a smile,” Przemysław Rey, director of the Museum of the National Anthem in Będomin, told Poland.pl. 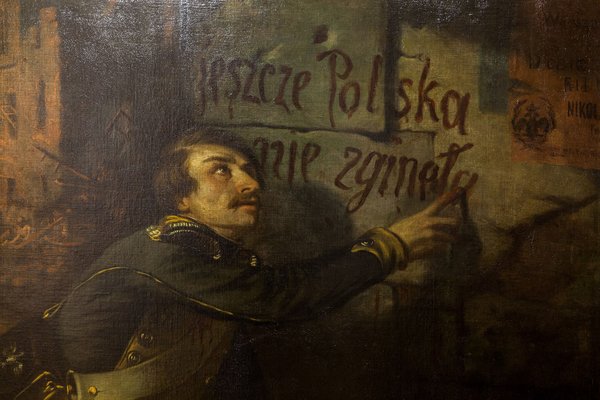 He lists versions of the mazurka which you can hear during a visit to the museum located in a Baroque eighteenth-century manor house, including the original six-verse song, two verses longer than the modern anthem. One can also read texts of parodies in which, depending on the times, the name of the founder of the Polish Legions in Italy, Jan Henryk Dąbrowski, is replaced with the names of contemporary leaders – Józef Dwernicki during the Napoleonic years, commander-in-chief Józef Piłsudski in the 1920s or General Władysław Sikorski, commander-in-chief and prime minister-in-exile during the Second World War.

“The last parodies are based not so much on replacing the names of the chief, as they are a commentary on the political situation. So their words are completely different,” explains Przemysław Rey.

This is probably the only museum in the world devoted solely to a country's anthem. Visitors learn about its history through a collection of items related to music, including music boxes and the oldest recordings. The museum, founded in 1978 in the eighteenth-century Baroque manor house belonging to the family of the song's creator, Józef Wybicki, showcases national traditions and symbols. Surrounded by a historic park with natural monuments, the museum allows you to see the décor of an eighteenth century Pomeranian noble manor house, with nineteenth-century paintings and kilims on patriotic subjects, a rich collection of weapons – swords and guns, as well as patriotic jewellery from the period of national uprisings and commemorative medals.

The museum is divided into two parts – an older one, telling the story of Józef Wybicki, and a twentieth-century one, showing the role of the mazurka in the Polish national consciousness. It is located in the Kashubian region, about 50 km south-west of Gdańsk. 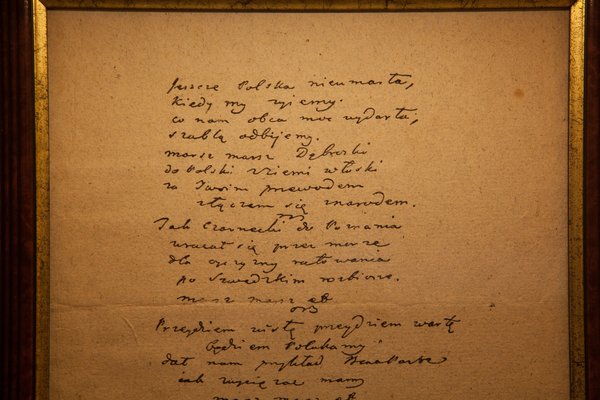 Polish patriotic song of July 1797, since 26 February 1927 the official national anthem of the Republic of Poland. Originally called the Song of the Polish Legions in Italy, written by Józef Wybicki to a melody by Prince Michał Kleofas Ogiński in Reggio nell'Emilia in the Cisalpine Republic and published in the newspaper “Dekada Legionowa” in Mantua in 1799. In 1798, it was already known in all annexed territories, sung during the November Uprising (1830) and the January Uprising (1863), during the Revolution of 1905 and both world wars. Lyrics of the mazurka, translated by poets sympathising with Poland, were known in 17 languages, and during the Spring of Nations in 1848 sung on the streets of Vienna, Berlin and Prague. It was also used in pieces of music, among others by Richard Wagner in overture Polonia, composed after the fall of the November Uprising.

In 2015, 37 years after the opening of the museum, a grant from the Ministry of Culture and National Culture helped modernise the permanent exhibition and an entirely new exhibition, enriched with multimedia , was opened. Today, among others, the inhabitants of Wybicki's manor house dressed in period costumes talk about the mazurka and visitors can see the new exhibits, acquired from the Warsaw Polish Army Museum, the Royal Palace and others. Two main exhibitions: “Józef Wybicki and his times” and “The fate of Dąbrowski's Mazurka” have one thing in common – the story of Dąbrowski's Mazurka from its creation as the Song of the Polish Legions in Italy, through to the partitions, to the restoration of independence. The narrative continues, from its adoption as the national anthem in 1927, to the times of World War II and the present day. 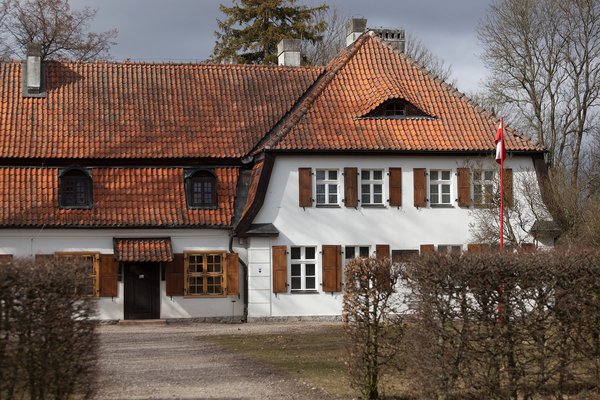 “An interesting subject is the reception of the mazurka over the centuries. We show that it was used as a basis for the anthems of other countries. The Ukrainian anthem opens with the words: “Shche ne vmerly Ukrainy,” which means “Ukraine has not yet died,” just like the Polish national anthem (“Poland has not yet perished”). Based on the song by Wybicki, in 1834 a Slovak poet, Samuel Tomasik, wrote a Slavic anthem “Hey, Slavs!” to a similar melody, which, in contrast to Dąbrowski's Mazurka, people were allowed to sing under Russian partition, because Russia supported the Pan-Slavic movement. Between 1939 and 1945, “Hey, Slavs” was the national anthem of Slovakia, in 1945 it was adopted by Yugoslavia, and after its collapse, from 2003 to 2006, the national anthem of Serbia and Montenegro,” says Przemysław Rey.

For 10 years, the museum has organised the Napoleon Battle, and in the future it is planning historical reconstructions of the Bar Confederation, the Kościuszko Insurrection and the American War of Independence.

Józef Wybicki (b. 29 September 1747 in Będomin – d. 10 March 1822 in Manieczki) – author of the lyrics of the Polish national anthem, writer, politician, chamberlain of King Stanisław August Poniatowski. Jurist by profession, became a deputy of the Sejm of the Commonwealth at the age of 20. Member of the Bar Confederation, riding with confidential missions to European countries. Reformer of laws in pre-partition Poland. He took part in the Kościuszko Insurrection of 1794. As a long-time collaborator and friend of General Jan Henryk Dąbrowski, he accompanied him on the trip to Wielkopolska to help the Kościuszko insurgents and worked with him in the Polish Legions in Italy. In 1797, he wrote the words of Dąbrowki's Mazurka. He participated in the Napoleonic Wars, and in 1807 contributed to the creation of the Duchy of Warsaw and became its senator. Organiser of Wielkopolska's defence during the Polish-Austrian War in 1809; after the Congress of Vienna, he created the Congress of Poland, where he held the position of senator-voivode; he was president of the Supreme Court in 1817-1820.