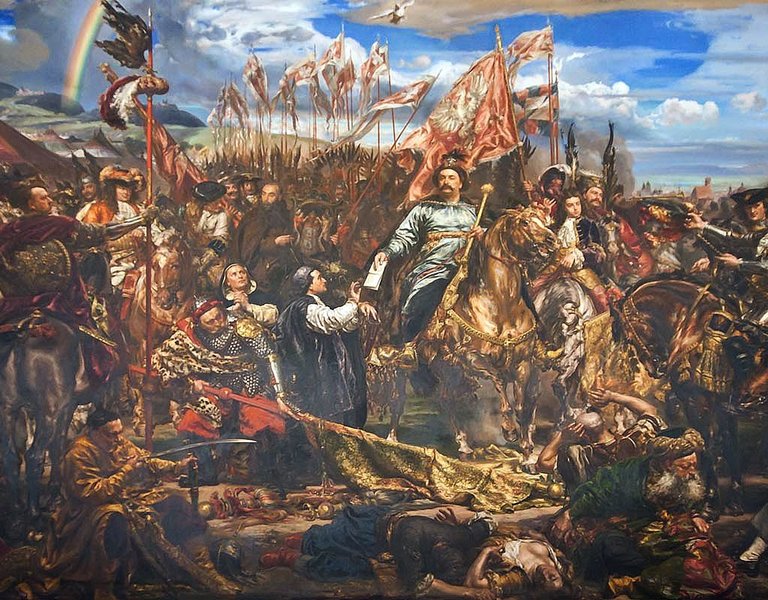 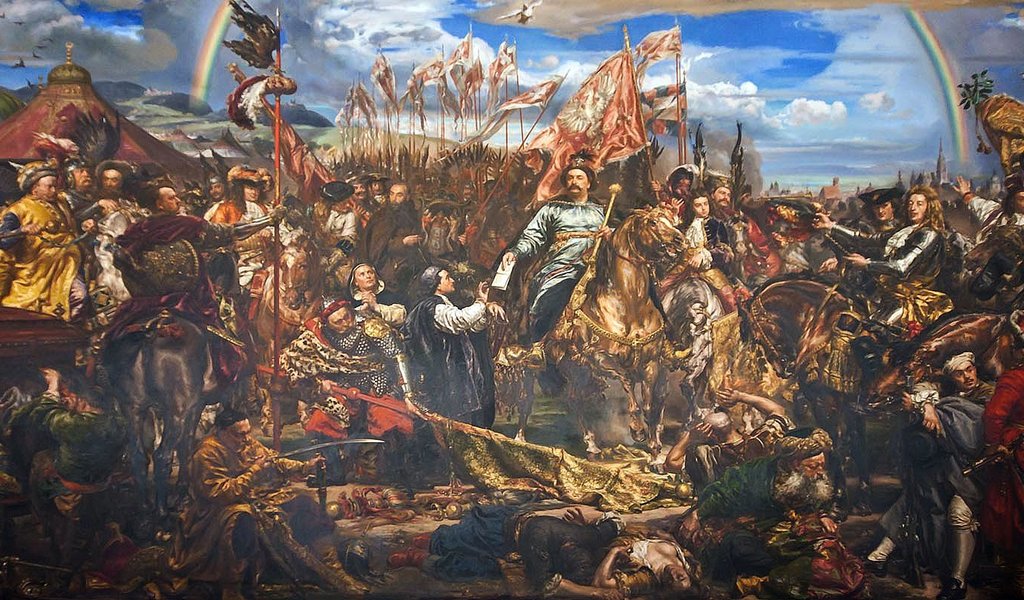 The Battle of Vienna

The Battle of Vienna took place at Kahlenberg Mountain near Vienna on 12 September 1683 after the imperial city had been besieged by the Ottoman Empire for two months. The battle was fought by the Habsburg Monarchy, the Polish–Lithuanian Commonwealth and the Holy Roman Empire, under the command of King John III Sobieski against the Ottomans and their vassal and tributary states.

The military alliance between the Commonwealth and Emperor Leopold I was signed on 1 Aril 1683. In order to avert bad luck and turning the pact into a topic of Fool’s Day jokes, it was antedated and bears the date of 31 March. Jan III had for long wished to achieve such an alliance, but to no avail. Only the Turkish threat facing Austria had finally jolted the emperor who was now concerned with obtaining help from the Polish monarch. The pact foresaw a joint battle against the Ottoman state, the avoidance of a separate peace treaty and a siege in case the Turks should attack the capitals of the two states. The Poles took upon themselves the mobilization of an army of 40 000 men and the Austrians promised to pay 1.2 million zlotys of war subsidies.

When the Polish-Austrian alliance was being signed, the Turkish army had set off from Adrianople and in the middle of July, having ravaged a large part of Hungary, it reached the walls of Vienna. 100 000 men were led by the conceited Kara Mustafa. A regular siege was commenced, but due to the courageous stand of the Viennese it did not bring the Turks the anticipated results. The sole hope for the town was assistance rendered by the Polish monarch.  The imperial diplomats send dramatic pleas, to which the victor of Chocim did not intend to remain indifferent. He was well aware of the gravity of the situation and, simultaneously, of the gains of an alliance with Austria. Sobieski presented his attitude in a letter to Mikołaj Sieniawski, the field hetman of the Crown: ”Either Vienna will

perish or defend itself; both shall be inconvenient for us, because it is much better to fight in a foreign land, eating foreign bread and with the assistance of all the forces of the Empire and not only the emperor himself, than to defend oneself at one’s own cost, when our friends and neighbours abandon us if we do not come to their aid immediately”.

Preparations for war were extremely efficient. In a short while, 21 000 soldiers gathered near Cracow. Earlier, the allies were joined by a 2 000-strong cavalry corps under Hieronim Lubomirski. The majority of the  forces was composed of the cavalry, in which the Austrians were particularly interested. Such a composition of the army made it possible to rapidly move towards Vienna.

The Crown armies did not wait for the Lithuanian forces and set off towards Tulln, where they were to cross the Danube and meet the Austrians and the contingents of the princes of the Reich. The choice of Tulln as the site of the crossing was to take the Turks by surprise. In order to implement this plan, the Austrian army was compelled to stop the enemy at Orenburg and Hetman Sieniawski, dispatched to Olomoutz, protected the main column, encumbered with enormous convoys and commanded by the king in person. The march progressed undisturbed although upon occasions the Poles plundered the local population. These conflicts stemmed from neglect to prepare supplies for such a great number of people and animals. The local inhabitants unwillingly accepted payments in Polish money, and the soldiers – in accordance with the norms of the epoch - did nit hesitate to resort to force in order to obtain provisions.  One way or another, the army marched at the speed of lightning. Three weeks after having left Cracow the Poles found themselves on the Danube.

Earlier, the monarch, leading 120 hussars, set off to meet Duke Charles of Lorraine. He travelled urged by imploring letters from the duke, who believed that ”the very presence of the king means as much as the arrival of a whole army” for improving the morale of the Austrian soldiers. True, the German commanders awaited the Polish ruler as their saviour although they were hostile to the idea of his command over joint armies. Charles, Sobieski’s recent rival to the Polish crown, acted quite differently. He was well aware of the battlefield experiences of the victor of Chocim and thus deeply concealed his wounded ambition, earnestly cooperated with the Pole, informing him about the situation on the front and zealously fulfilled the requests of the commander-in-chief.

The allied commanders met at a council held on 3 September in Stettelsdorf, where further plans assumed form. It was decided to march across the hilly Vienna Woods. Further projects, however, caused a serious disagreement. The duke of Lorraine proposed taking the easier route along the Danube, so as to reach the besieged town as soon as possible. Sobieski, however, had not studied ancient military treatises in vain. He wanted to avoid repeating the errors committed by the Romans at the battle of Lake Trasimeno, when Hannibal crushed the drawn out Roman army, and thus forced through his plan. The easiest route was to be followed by the Austrians in order to draw the attention of the enemy.

At the same time, the Poles were to traverse the inaccessible hills of the Vienna Woods, and after appearing in the fore fields of Vienna to flank the enemy. In other words, the task of the duke of Lorraine was to merely to drive the Turks away from the town, while Sobieski planned to totally crush the enemy army.

Having crossed the Danube to Tulln, the allied armies now stood at the  foot of the Vienna Woods. The left wing was composed of the Austrians, the centre consisted of German contingents, and the Poles marched on the right. On 10 September 69 000 allied soldiers started to tackle the hills. The Poles were doomed to move in particularly difficult conditions but still managed to transfer their artillery. After marching for a day, the Austrians captured the hills of Leopoldsberg and Kahlenberg from which they fired several flares as a signal for the besieged town. On the following day, the commander of the allied armies was able to examine the future battlefield. What he actually saw differed from the maps: the town was preceded by yet another range of hills, which had to be captured prior to the decisive confrontation.

The Turks opposed the Christian forces with an army of about 90 000 men. Its distribution created a number of difficulties. Despite the insistence of his advisers Kara Mustafa did not resign from the siege and directed all his forces against the allied armies. More, he did not   benefit from the chance of halting them in the gorges of the Vienna Woods. The only perspective was, therefore, a battle to be waged on the fore field of the town.

On 12 September the Turkish commander, who had not resigned from the siege, directed the majority of his forces against the duke of Loraine, who he expected would lead the main attack. Since early morning, the Austrians and the Germans engaged the Turkish forces. The Poles  joined the battle later, at noon. Gradually, they drove the Turks from the hills, and thus prepared the terrain for a future charge. The view of the Polish cavalry banners encouraged the German detachments, fighting since morning, and at the same time made the Turks aware of the encroaching danger. First, the attack was launched by 15 000 Tartars, who were driven back with great losses. Kara Mustafa thus started to hurriedly shift his forces to the threatened wing.

At about 4 p.m. the Poles were ready to charge. Sobieski, wishing to test the terrain and to make sure that the Turks had not set any traps, first sent on a trial charge the hussars of Prince Aleksander and two choragi (banners, basic units) under Stanisław Potocki. The losses were considerable and Potocki fell in battle. The attack, however, showed that a charge had great chances for success.

The Polish monarch saw an opportunity for ending the confrontation already before sunrise. 20 000 cavalrymen went into battle  – one of the greatest charges in world history. The force was overpowering - the attacking men literally swept away everything in their way. The panic-stricken Turkish detachments fled, followed by the Polish light cavalry.

Victory was complete. The Turkish army lost almost 15 000 men and was incapable of any further manoeuvres for a long time. The inept Kara Mustafa attempted to continue fighting in Hungary but was strangled by the sultan’s envoys. John III triumphed. In a letter addressed to the pope, written in the captured tents of Kara Mustafa, he paraphrased Julius Caesar: ”Venimus, vidimus, Deus vincit”. The triumphant victor was, however, the Polish monarch. By saving Vienna he won eternal glory and influenced the course of history, since the victory at Vienna was one of those which proved decisive for the fate of world history.