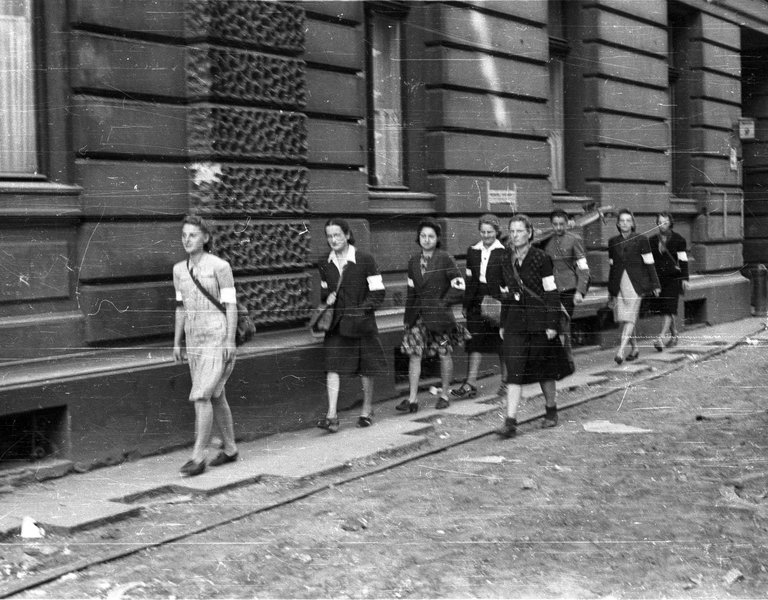 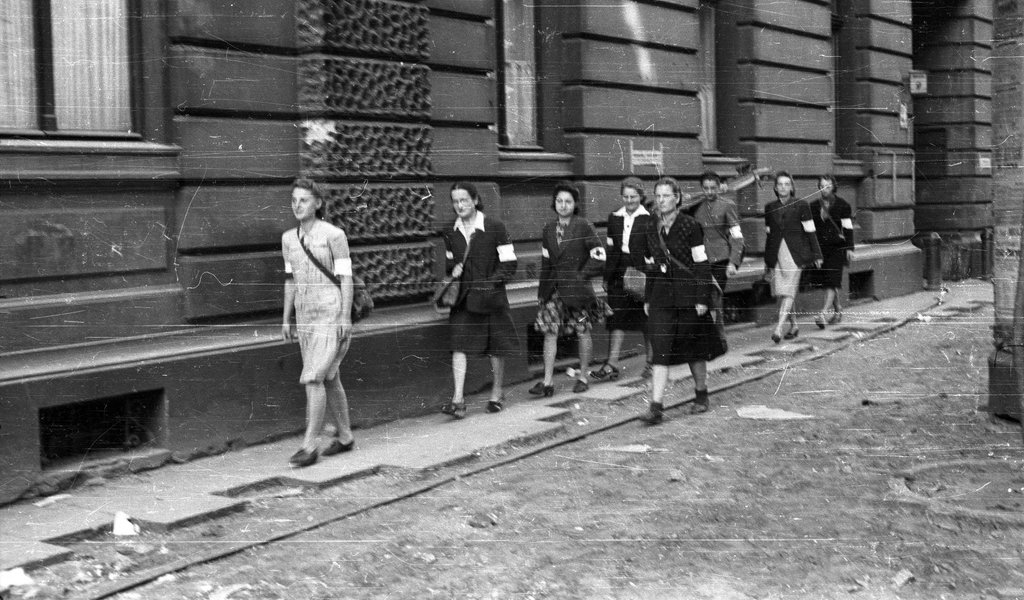 Girls in dresses covered with flowers

They did almost everything during the Warsaw Uprising of 1944. They looked after the wounded, ran dispatches, did the cooking and darning, and even planted explosives. They would also take part in regular armed combat, just like Wanda Traczyk-Stawska, the hero of the newest documentary about the Warsaw Uprising, the Portrait of a Soldier. 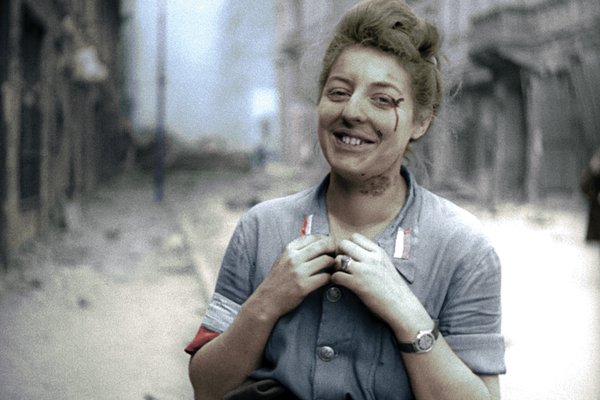 Many young girls left their homes on 1 August 1944 to fight in the Warsaw Uprising wearing summer flower-covered dresses. After all, it was warm outside, and the campaign was thought to have run for a mere three days. Ultimately, the young people would resist the German occupying forces for as long as 63 days.

“When the Uprising ran longer than planned, they donned military camouflage and drill jackets, just like the boys, but we can still see how good looking they are in the photographs, dressed in military uniforms with the white and red armbands, but with chic hairdos and makeup on and looking at themselves in the mirrors. They remained women,” says Katarzyna Utracka, a historian at the Warsaw Rising Museum. “Maybe that was a way that saved them, a survival tactic, because people were being killed all around—their family, friends, loved ones. Men that meant a lot to them,” adds the historian. They themselves would get killed, too.

"Nurses were the bravest and most admirable. They had to come out unarmed, dodging the bullets. They also dressed the wounds of the Germans, for there was a rule that a wounded enemy is no longer a hostile but just a man. But the Germans would shoot them like ducks, when they darted out carrying the Red Cross flag to treat the wounded. That’s something I’ll never forgive them for,” says Wanda Traczyk-Stawska, nom de guerre “Pączek” (Daughnat), in the film Portrait of a Soldier. 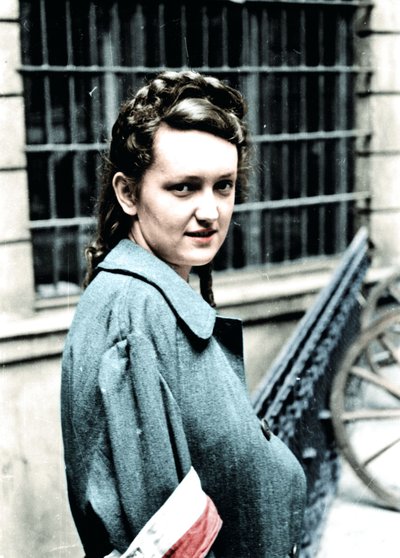 The nurses managed to reach the most advanced points on the front line. “They would often venture behind the enemy lines to get a wounded man back. That was the case of Krystyna Krahelska “Danuta,” who before the war posed for the Warsaw Mermaid monument and was the author of the famous war song “Hey Boys, Fix Bayonet.” She was killed rescuing her fellow insurgents during an attack near the Pola Mokotowskie Park. She never hesitated, even though the bullets flew high. She was badly injured on 1 August, and died on 2 August at dawn,” explains Ms Utracka.

Most women fought on a tougher front line, at the rear. “When I talk to the insurgents, they always stress that fighting on the first front, arms in hand, was not as dangerous as at the rear, for example in hospitals. For the rear would be most severely bombed by the Germans. Polish and German positions were often separated with a street, so the Germans bombarded hospitals and lodging places, killing patients, doctors and nurses there,” adds the historian.

The nurses would often have to carry the wounded down the sewers, for example they evacuated them from the Old Town to the Śródmieście district. Female messengers also went into the sewers, carrying reports, dispatches and mail. Sometimes they reached places that had not been explored before. “Some of them were looking for new evacuation routes along the city’s sewers. They led soldiers and civilians. It was an extremely arduous line of duty and often fatal. We should bear in mind that it was not only men and boy scouts, the so-called sewer rats, that went into the sewers, but also female scouts and women who were looking for new passages. Among them was Elżbieta Ostrowska, nee Gross, nom de guerre “Ela,” who ran a dispatch unit in Aleje Jerozolimskie and maintained contact between the Śródmieście and Mokotów district,” says Ms Utracka. 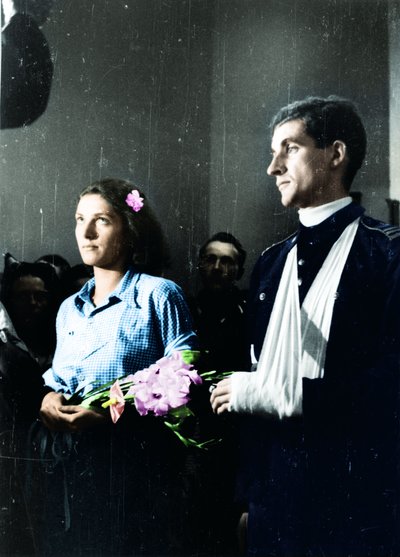 Women at the rear also worked in sewing and laundry rooms, and field kitchens. The insurgents had to be clothed, fed and provided some rest, cheered up. PZ-ers (after the PZ, or Soldier Relief, section) did a terrific job here. During the Uprising PZ-ers ran over thirty make-shift inns, most of them in the Śródmieście and Powiśle districts, where the fighters could listen to concerts and poetry evenings, read a book and take a rest. That, in spite of appearances, was very important for the insurgents; it gave them hope and raised their spirits,” says the historian.

“When we think of insurgents, we mean not only armed combatants, liaison officers or nurses, but also women who worked for the army as seamstresses and in canteens,” adds Katarzyna Utracka. “The database we are constantly expanding contains nearly 55,000 names – confirmed participants of the Uprising. According to my research, twelve thousand, or 20 percent, of them were women. Earlier publications would put this figure at 12-15 percent.”

The Warsaw Uprising was joined by close to seven thousand women who were part of the Women’s Military Service, which was attached to the Home Army. The Service was headed by Maria Witek “Mira,” a pre-WW2 chief of the Women’s Military Training scheme. These women were given courses on communications and medical aid. Volunteers made up the rest of the total of twelve thousand female insurgents. Though not always well-trained, they would gain knowledge in the course of the Uprising. Women in active service were awarded military ranks by the Home Army commander on 23 September 1944. This meant that after the Uprising’s end on 2 October 1944, they became German POWs with the same rights as men. Most of them were interned in the Oberlangen camp in Germany.

“To understand the Warsaw Uprising, one needs to understand the nature of the German occupation of Poland. People faced a permanent threat of losing their life just for being Polish. It was the Germans who made people start the Uprising, and it was the Germans who made the fighting so fierce. Because they brutalized us during the occupation,” says Wanda Traczyk-Stawska in the Portrait of a Soldier. 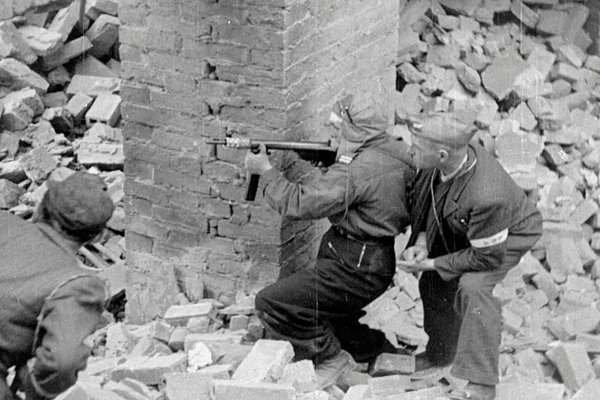 Women insurgents also included those who took part in armed struggle, like sappers. They joined in the assault against the PAST (Polish acronym for Polish Telephone Joint-stock Company) offices at 20 Zielna street on 20 August 1944. Barbara Matys-Wysiadecka, nom de guerre “Baśka-Bomba,” Wanda Maciejowska, nom de guerre “Iza,” and Irena Grabowska, nom de guerre “Hanka,” planted explosives in a building adjoining PAST. The explosion allowed the boys to launch an attack against the Germans. “It was one of the most spectacular victories by the insurgents. The success was largely due to women sappers,” says Katarzyna Utracka, a historian from the Warsaw Rising Museum.

It was mainly in the northern and southern parts of downtown Warsaw that Wanda Traczyk-Stawska, nom de guerre “Pączek,” fought in the Screening Detachment of the Military Publishing House. Insurgent newsreels show her holding a Lightning machine gun, surrounded by soldiers fighting in the northern part of downtown Warsaw. She took up arms because she considered impotence to be the worst thing during the wartime German occupation. She wanted to be able to defend herself. The Warsaw Uprising saw many more women like her. They were aged from mid-teens to mid-twenties.