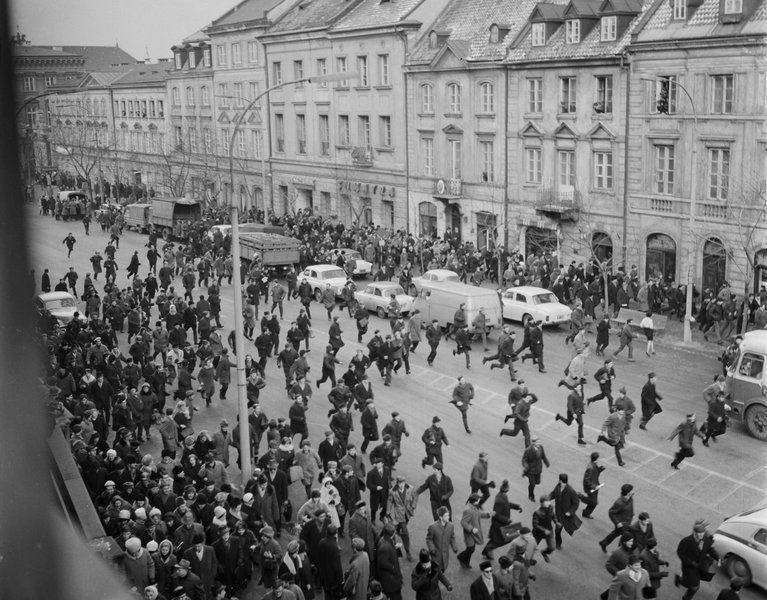 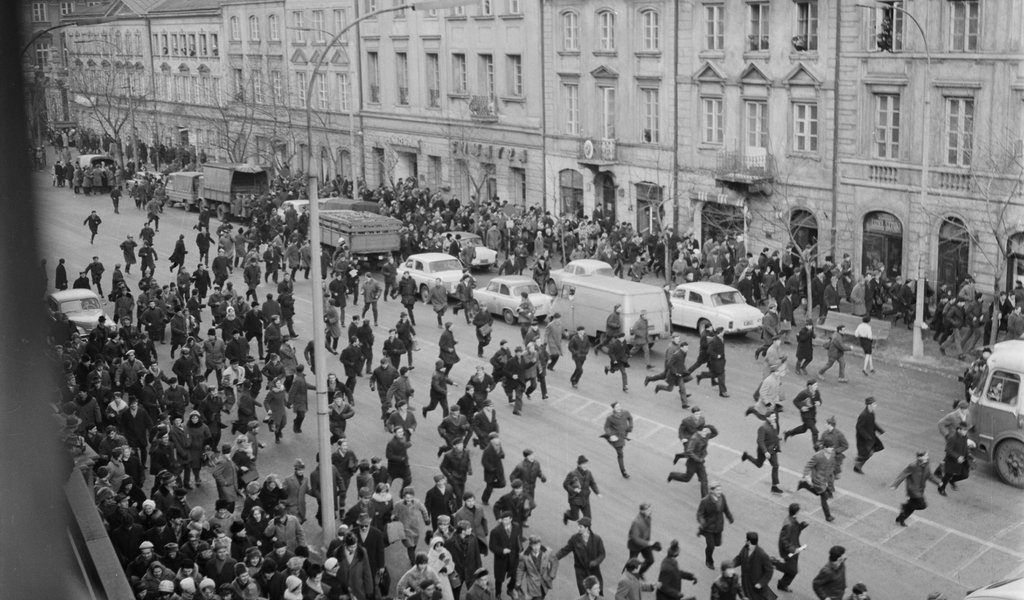 Following the Second World War and the decisions made by the Big Three in Tehran, Yalta and Potsdam, Poland, like several other Central and Eastern European countries, found itself in the Soviet sphere of influence. This was a consequence of the Red Army having liberated Polish lands from the German occupation.

In 1944-1945, millions of Soviet soldiers moved from east to west and back again. Their military presence was the decisive factor for the Polish communists, supported by the Kremlin, to create a non-sovereign and undemocratic communist regime in Poland. The subsequent stages of its history marked the struggle of Poles for their freedom, democracy and independence, symbolized by social rebellions, traditionally referred to according to the names of "Polish months."

The 50th anniversary of one of them (March'68) lends itself to a few general reflections. Firstly, despite the publication of about 70 books and brochures devoted to contemporary events in Poland, we are still not able to provide satisfactory answers from an academic point of view. At the same time everyday knowledge on this issue in Poland remains rather shallow and one-sided, and sometimes even contradictory to the latest historiographical findings. For example, one can still encounter a traditional, stereotypical approach, even in serious texts, stating that in the spring of 1968 Poland saw a rebellion of students under the slogans of liberty. According to this narrative, these students were supported in their struggle for the liberalization of the system by part of the intelligentsia (especially those in creative professions) with a reluctant (sometimes only passive, and sometimes even hostile) attitude on the part of the workers.

In reality, among those detained by the militia March 1968, it was young workers, not students, who constituted the largest group. Besides, the street demonstrations and clashes between the youth and the "law enforcement" next to the main academic centres of the country, also took place in cities where there was no university at the time. Flyers and publications were also distributed on a large scale across the country in several hundred towns. It was primarily a generational rebellion, and students were in large part supported by young workers and secondary school students - representatives of the post-war demographic boom, that is, people brought up and educated in communist-run Poland. Young people demanded the liberalization of the system and the reference point for their aspirations and expectations could no longer be Poland from the interwar period, but rather Western countries, which they learned about in films and books, and also due to the increasingly popular television.

Secondly, despite the unquestionable and enormous progress in researching the events of 1968 in Poland, a number of issues remain unresolved. We will probably not find the answer to these questions in Polish archives, although in this respect a lot of research has already been carried out. Perhaps it will be possible when historians gain free access to post-Soviet archives located in Russia, but that is unlikely to happen in the near future.

Thirdly, despite the efforts made by historians, often in the public discourse we are asked to choose one thread related to the 1968 crisis while omitting, or at least marginalizing, another. This is often combined with our own experiences from half a century ago. People like to write and speak above of all (sometimes exclusively, in extreme cases) about the aspect, thread, related to March, with which they themselves are somehow connected to. This is aided by the fact that the concept of March'68 contains a number of different, not necessarily related, and sometimes even mutually exclusive and contradictory threads. For example people who, following a brutal anti-Semitic campaign – orchestrated by official factors clumsily hidden under anti-Zionist slogans - emigrated from Poland after March, most often mention anti-Semitic statements and behaviours, and sometimes - while remaining in the same thematic circle - recall a variety of decent gestures that have been witnessed by various people. This also applies to those Jews and Poles of Jewish descent who, for various reasons, decided to stay in the country.

However, in both cases these accounts are sometimes accompanied by unjustified generalizations. It is not true that anti-Semitic attitudes are widespread in Poland today, but it is also unfortunately not the case that they do no exist at all. It was no different half a century ago. Some people actively joined the heinous anti-Semitic campaign unleashed by the communists (a quarter of a century after the Holocaust carried out by the Nazis on Polish land!). Others were outraged, terrified and shocked. Some even got involved in open protests, even though this usually exposed them to the “leadership’s scorn.”

Finally, there were often passive and sometimes neutral attitudes that can be boiled down to the formula: "yes, but..." Those who were students in 1968 usually place most importance on the student aspect of the March events. They mainly remember the university rallies, strikes and demonstrations.

Many see March as an event that influenced their future lives. In the 1970, some of the people of this generation were part of the anti-communist opposition, in 1980 they found themselves among the activists and advisers of Solidarity and after the systemic transformation in Poland they became members of parliament, senators, ministers, etc. As a result, for many people in the world of culture, science and arts, for many years, the events were referred to mainly as an anti-intelligentsia pogrom, and mass media brutally attacked writers and scientists, often with great achievements and merits. A common feature of all these publications was that much like party activists they did not pay due notice to ideological and moral values, nor professional qualifications, among the people it attacked. At the same time, new people were rising to the surface of intellectual life, whose promotions were a result of their political disposition, rather than just their skills and diligence.

The discussed trends were accompanied by an implicit factional struggle in the leadership of the Polish United Workers' Party, which temporarily weakened the position of the first secretary of the Central Committee of Władysław Gomułka. At that time, a wave of "anti-Zionist rallies" organized by the authorities swept through the country.

This was accompanied by a political purge, which included the party apparatus, central and local offices, state administration, army, mass media, education, health service, scientific and cultural environments - in practice almost all spheres of public life. Primarily, but not exclusively, people of Jewish origin were removed from the Party and from work. They were held responsible for all errors and setbacks and most of all they were blamed almost exclusively for the crimes and iniquities of the Stalinist period in Poland. In this atmosphere, over 15,000 people emigrated from Poland in four years.

JERZY EISLER is professor at the Institute of History at the Polish Academy of Sciences and director of a branch of the Institute of National Remembrance in Warsaw. He specializes in the modern history of France and Poland. Prof. Eisler is particularly interested in biographies and in the history of political crises in the People’s Republic of Poland.

In 2013, he was awarded the Commander's Cross of Polonia Restituta for outstanding achievements in researching, documenting and commemorating the history of March’68. 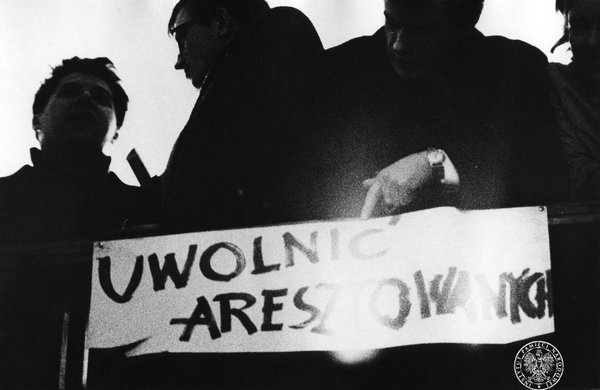 A chain of circumstances triggered the March 1968 events.  One immediate cause was a power struggle within the Communist Party’s senior ranks. Władysław Gomulka, the then First Secretary of the Polish United Workers' Party, and his closest aides felt seriously threatened by rivalling Communist Party fractions amid a growing public discontent with communist policies.

The brutal rivalry inside Communist Party ranks coincided with the outbreak of the Six-Day War in 1967, in which Israel defeated a coalition of Arab States. In response, their supporter in the war, the Soviet Union and its satellite countries, including the Polish People’s Republic, broke off diplomatic relations with Israel. This served as a pretext to launch an anti-Zionist campaign which condemned Israel for its "imperialistic ambitions." When Władysław Gomulka spoke at a congress of communist trade unions, he said that Jews were a "fifth column" and accused them of acting against State interests. Anti-Jewish rhetoric was used as an instrument to assuage the growing anti-government  public sentiment.

Gradual withdrawal by the communist rulers from the hard-fought reform programme initiated in 1956, the unabating Soviet domination, hopes raised by the Prague Spring in 1968, and the growing discontent of young people who were fed up with the authorities' oppressive policy against the intelligentsia – all this led to increasing destabilisation of the political system.  The spark that ignited protests at the University of Warsaw, which quickly spread to other centres, was the cancellation of Adam Mickiewicz's play Forefathers' Eve.  The authorities brought down the curtain on this play, written by the 19th-century Polish bard and staged at the National Theatre, for allegedly being "anti-Soviet". The final curtain call on the play sparked a manifestation – one of many – against censorship in culture and against trampling basic civil liberties. Gomułka again pointed his finger at students of Jewish origin blaming them for spreading protests, making it the official propaganda line.

The protests were backed by some members of the intelligentsia, like the writer and conservative columnist Stefan Kisielewski, who publicly spoke about "the scandalous dictatorship by dummies in Polish cultural life" which cost him a brutal beating at the hands of "unknown perpetrators." Other Polish cities soon joined Warsaw in anti-communist protests.

The consequences of the 1968 March events in Poland were wide-spread repressions, the scale of which is not precisely known. Students who took part in strikes were expelled from universities, some were brought to trial. The authorities used anti-Jewish propaganda to carry out political cleansing among the ranks of party apparatchiks, government administration, the armed forces, and all the institutions they controlled: from health care service to higher schools. People who were fired from their jobs were accused of committing Stalinist-era crimes and "distortions" in the years that followed. The anti-Semitic campaign led to a wave of emigration.

Two and a half years later, Władysław Gomułka was replaced by Edward Gierek as the leader of the Polish communist party who had to step down after sending the Polish People’s Army and the Citizens Militia to Gdansk and other places in Pomerania to put down workers' protests in 1970 ending in bloody riots.