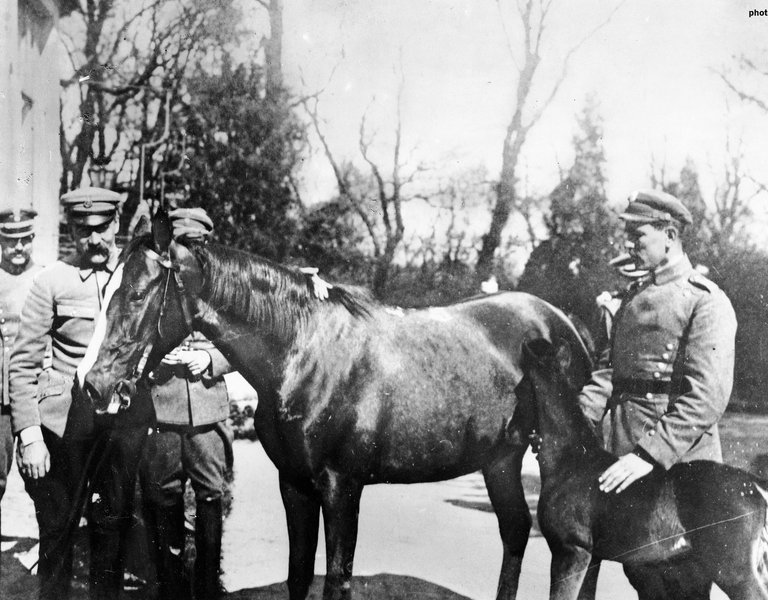 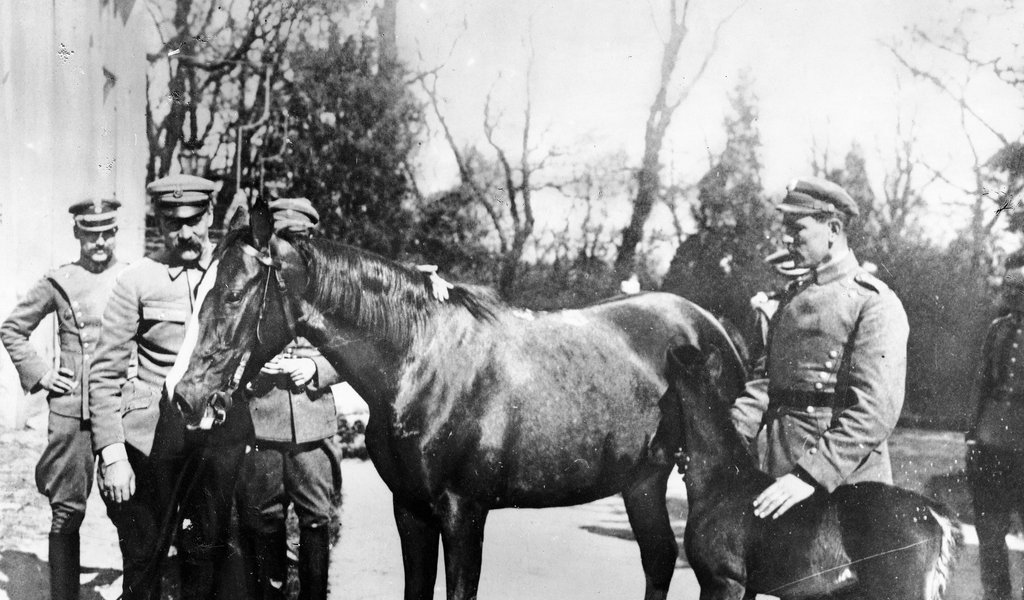 A not too tall, somewhat skittish but extremely appealing steed became one of the symbols of independent Poland. Kasztanka, a chestnut mare, was so attached to her master Józef Piłsudski “that she acknowledged no one else but him.” 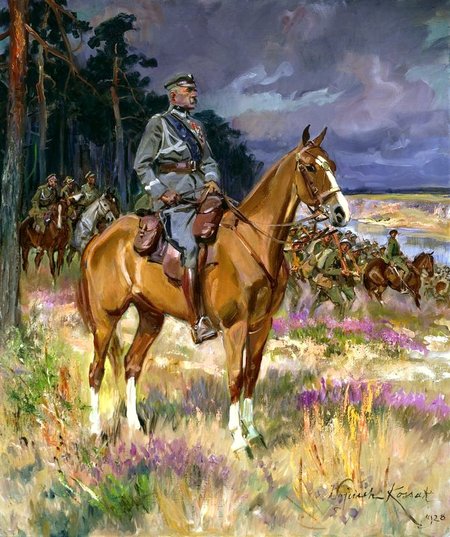 On the night of August 5 to 6 1914, the First Cadre Company marched forth from Krakow’s Oleandry district. Many of its soldiers lacked complete uniforms, let alone properly fitted mounts. While marching to Kielce, the unit stopped at Miechow, from where patrols were dispatched to nearby localities. One patrol arrived in Czaple Male, the estate of Count Eustachy Romer. An upsurge of patriotic sentiment moved its owners to donate several horses to the riflemen.

One was a not too tall but extremely attractive four- or five-year-old light-chestnut-coloured mare. The bottom part of its legs was white, setting the horse apart from the unit’s other mounts. Piłsudski immediately took a liking to the proud and noble mare. The only problem was its name – Fantazja (‘Fantasy)’. The Marshal wondered how appropriate it would be for the man hoping to lead Poland to mount a horse named Fantasy, and soon renamed it according to his own preference. Therefore, the mare went down in history as Kasztanka (‘Chestnut’). Today it is mentioned in a single breath with other famous mounts such as Bucephalus of Alexander the Great, Napoleon Bonaparte’s Marengo or Polish King Jan III Sobieski’s - Pałasz (‘Cutlass’).

Piłsudski soon realised that not only the horse’s name had been a problem. Accustomed as it was to rural life, the equine was on the shy and timid side. Kasztanka was not only afraid of artillery fire but was even unnerved by the cheering throngs that lined the First Cadre Company’s route.

Piłsudski had hoped the horse would lose its shyness, but that was a mistake. “Already when approaching the bridge over the River Dunajec, which had been pock-marked by artillery shells, Kasztanka shook her head to indicate it looked too precarious for her noble existence. […] She cautiously moved through rows of people, stopping every few steps of the way.”

“I could feel beneath me a hapless creature seeking refuge,” Piłsudski recalled in his book Moje pierwsze boje (‘My First Combat’) his entry into the town of Nowy Sacz. Nevertheless, Kasztanka accompanied him along the First Brigade’s entire battle trail.

Whence that exceptional bond which would endure for years? In her recollections Aleksandra Piłsudska wrote of her husband’s attachment to Kasztanka as follows: “It is difficult not to be moved at the sight of her nuzzling his hand with her soft lips or stroking his back with her neck.” The mare was so attached to Piłsudski that “she acknowledged no-one else but him as her master,” and the Marshal greatly valued Kasztanka’s devotion.

Following the 1920 Polish-Bolshevik War, he entrusted Kasztanka to the care of the 7th Lublin Uhlan Regiment stationed in Minsk Mazowiecki. There she even produced her own progeny – a female colt Mera, named in honour of the river flowing through the Piłsudski family estate in Zulow, and the stallion Niemen. The latter had been intended as Piłsudski’s next steed but, except for his mother’s noble apparition, turned out to be extremely lazy. Neither of her colts had enthralled Piłsudski the way Kasztanka had done.

During the interwar period, Kasztanka became one of the symbols of independent Poland. For that reason, all the Marshal’s equestrian portraits enjoyed great popularity. The best known had been painted by Wojciech Kossak. The artist received so many commissions for successive portraits of the leader astride his beloved Kasztanka that he was forced to share them out to other painters.

Kasztanka accompanied Piłsudski at his birthday celebrations and, at times, also during his stays in Sulejowek, his home outside Warsaw.

She was also his constant companion at every Warsaw military parade. This lasted only until November 11 1927, when Piłsudski publicly mounted Kasztanka for the last time. A week after the Independence Day celebration, Kasztanka got loaded onto a train which was to take her back to the army stables at Minsk Mazowiecki. To this day it remains unclear what actually occurred during that trip.

Circumstantial evidence suggested that the mare had not been properly secured for the journey. As a result of such negligence, the horse had a hard time keeping its balance during the trip, was thrown from one side of the truck to the other and most likely fell more than once. The fact remains that after being transported back to the Uhlan Regiment, Kasztanka was no longer able to get back on her feet.

The local vet immediately got on the case, and two additional specialists were brought in from Warsaw. “The examination revealed the numbness and paralysis of the animal’s entire hind quarters. […] With sorrow we looked upon the suffering reflected in the mare’s glassy eyes.” That is how it was recounted later by Colonel Konrad Millak, one of the army vets trying to rescue Kasztanka. The final diagnosis showed that the mare’s two hindmost dorsal vertebrae had been fractured.

Kasztanka died on the morning of 23 November, a scant two weeks after her last parade. Józef Piłsudski was deeply bereaved at the loss of a faithful companion and even ordered a complete post mortem to be carried out. He blamed the death of his favourite mount on Colonel Zygmunt Piasecki, commander of the 7th Lublin Uhlan Regiment who was henceforth barred from entering Belweder Palace, Piłsudski’s residence and headquarters. 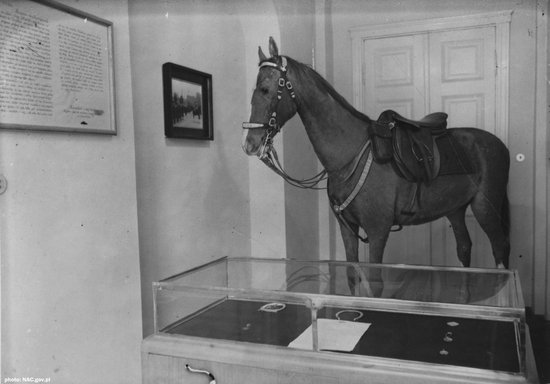 “I recognise this beast!”

It was generally felt that the horse that had accompanied Piłsudski in so many battles should be properly honoured. It was decided that Kasztanka’s hide should be stuffed by a taxidermist and that her remaining fragments should be laid to rest outside the Uhlan Regiment’s Command in Minsk Mazowiecki.

Working with the thin, smooth horse hide required painstaking precision. This challenging task was attempted by a taxidermist about whom little is now known, except that his honorarium was to be what was then an impressive sum – 1,500 złotys.

But the results of his effort turned out unsatisfactory. Colonel Millak recalled that the sawdust-stuffed horse hide was a caricature. It had a large head attached to a thin neck, and unnaturally round torso and exceptionally thin legs devoid of muscles. “That was a far cry from the noble image Kasztanka had cut during her lifetime. Only her colouring reminded one of the mare’s original appearance,” he recalled in his memoirs.”

Millak also noted an unfortunate incident that occurred when the stuffed mare was delivered. Knowing the Marshal’s attachment to his steed, the taxidermist, despite his botched effort, requested that his honorarium be doubled.

As a museum piece, Kasztanka was displayed at the Veterinary Training Centre before being moved to the Polish Army Museum. After Piłsudski’s death, it was exhibited at Belweder Palace where it remained until the outbreak of the Second World War. After the Germans invaded Poland, it was put into storage in the warehouse of the National Museum.

Left unattended without proper maintenance and subjected to dampness and moth attacks, the stuffed mare nevertheless survived the war. Its fate, however, was sealed in September 1945. “I recognise this beast. I even got kicked by it, and there is no need to keep these remains around,” remarked People’s Army Commander Marshal Michał Rola-Żymierski during a visit to the museum. Once a member of Piłsudski’s legions, already before the war he got demoted for financial irregularities involving army supplies. That was when he linked up with communists. Poland’s new communist rulers, whom Żymierski represented, despised mementos symbolising interwar Poland and the legacy of Józef Piłsudski. So the stuffed Kasztanka was taken out of the museum warehouse and destroyed in front of the building.