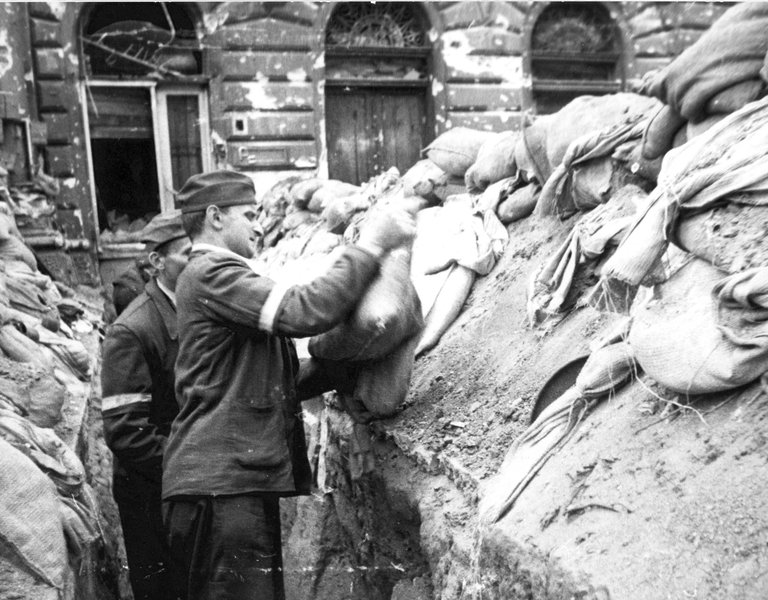 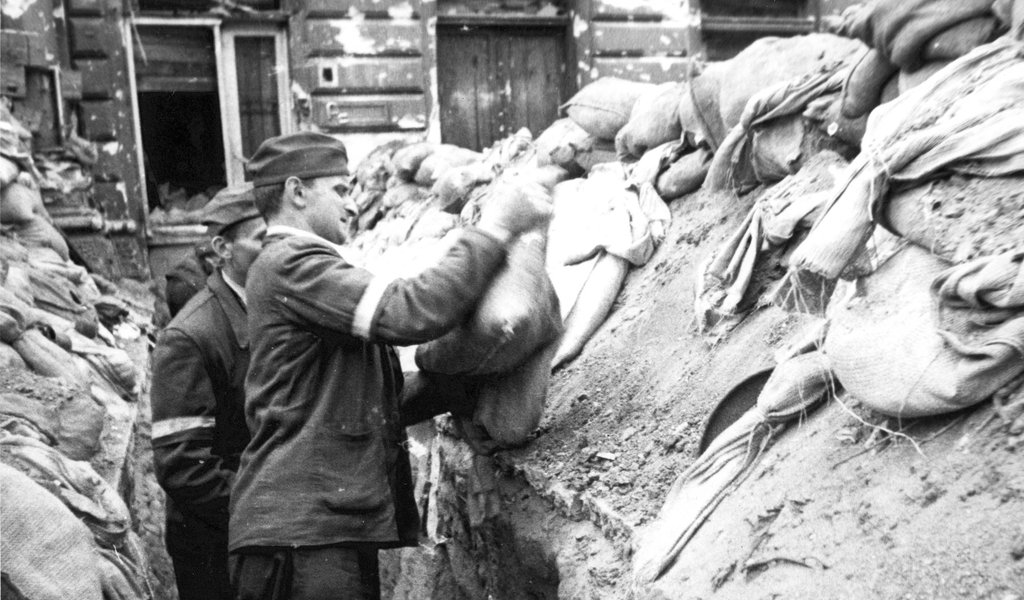 The most famous Warsaw barricade

President Donald Trump mentioned it in his Warsaw speech From the first days of the 1944 Warsaw Uprising, the people of Warsaw spontaneously began building barricades as well as anti-tank and liaison trenches to impede enemy fire on insurrectionist positions facilitating communication between freedom-fighters and civilians alike.

Warsaw residents constructed them using whatever was at hand – earth, paving stones, cobbles, stones, bricks from demolished buildings, tramcars, household equipment, etc. Some lasted several days, others – several weeks. There were also those that survived until the end of the uprising. Amongst them was the most famous of them all – the combined barricade and cut-through at Jerusalem Avenue. It was mentioned in the speech delivered by US President Donald Trump at Warsaw’s Krasiński Square at the foot of the Warsaw Uprising Memorial.  73 years on, it was once again given the recognition it deserves. Back then, it was the only way insurrectionists as well as ordinary  Varsovians seeking safe passage could make it from one part of central Warsaw to another. It is therefore worth recounting the unique story of a barricade that became a symbol of resistance. 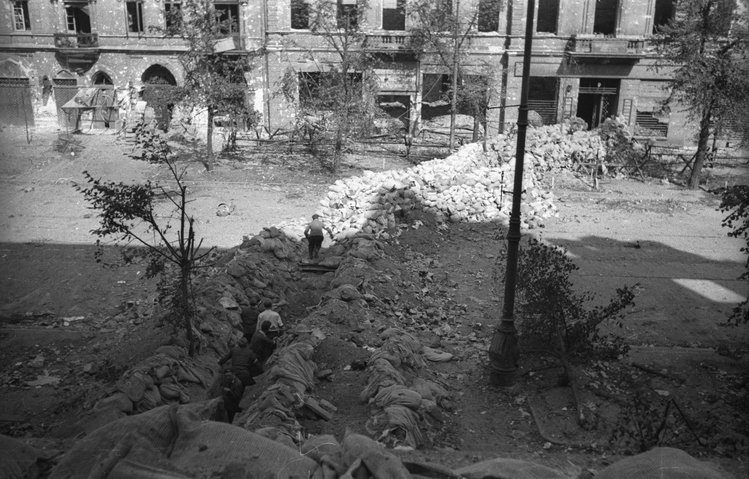 A city of underground passageways & barricades

At the turn of March and April 1945, the Capital City Reconstruction Bureau completed an inventory of insurrectionist barricades. Half a year after the fighting had ended, some of them no longer existed, having been dismantled by the army as well as by Warsaw residents gradually repopulating the city’s ruins. It was then that 1,038 barricades were described and documented. We therefore do not know exactly how many of them there had actually been. But even that figure provides a general impression of Warsaw as a city of underground passageways and barricades in August and September 1944. One of the most important, if not the most important, was the above-mentioned combined barricade and cut-through at Jerusalem Avenue. Repeatedly fortified and shored up, it survived down to the end of the uprising.

From 1943, Jerusalem Avenue had been the city’s principal east-west thoroughfare. For the German occupation forces, it was the shortest transport route to the front via the Poniatowski Bridge. Therefore, from the first days of the uprising the stretch between Nowy Świat and Marszałkowska streets was under constant German fire and was additionally controlled by tanks. Formidable enemy positions at the Main Station (the no longer existing railway station along Jerusalem Avenue between Emilii Plater and Marszałkowska streets) and the massive building of the National Economic Bank at the corner of Jerusalem Avenue and Nowy Świat made traffic along the thoroughfare impossible and effectively divided the city centre into two parts – a northern and southern section.

Despite daring attempts to cross Jerusalem Avenue under the cover of night, many liaison girls and messengers were killed or wounded. Attempts were made to liaise using a tin containing messages suspended from a cable thrown across the road. Another trick used by the freedom-fighters was to divert the Germans’ attention with a pole-mounted mannequin when a messenger tried to cross the 25-metre-wide avenue. One such episode was captured on film by an insurrectionist cameraman. Insurrectionist positions can be seen there, veritable outposts on both sides of the Jerusalem Avenue, where the barricade and cut-through would soon be built. That site was located and described by Zygmunt Walkowski who had worked on the reconstruction of insurrectionist documentaries in the latter half of the 1980s.

The decision to build

The decision to begin construction was taken on around August 4th 1944 by the uprising command. Leading the initiative was Captain Jerzy Skupieński, code-name Jotes, from the Warsaw District’s sapper unit. A double barricade made of earth-filled sacks was to have been built simultaneously on both sides of the road. On the north side, from the gateway of No. 20, the barricade was built by soldiers from the Kiliński Battalion. On the south side from No. 17 (now No. 23) the builders were soldiers from the Bełt Battalion. But before they began work, the insurrectionists sought to push the enemy out of neighbouring buildings and strengthen their own positions (i.a. they installed a machine-gun nest on the second-storey balcony of 22 Jerusalem Avenue).

The site at which the barricade was to be built was not chosen at random. The ground floor of the annexe at 17 Jerusalem Avenue housed District Report Depot “S”, run by Second Lieutenant Elżbieta Gross, nicknamed Ela (maiden name Ostrowska). She collected reports from report depots in Mokotów, Ochota and Warsaw county and sent them to the District Report Depot in Jasna Street, from where they were passed on to uprising commander Brigadier General Chruściel.

On the night of August 7-8th, the building of a passageway got under way and would be carried out in several stages. In the Bełt Battalion a sapper platoon was set up under the command of Lieutenant Józef Łowiński, code-name Byliński. Work on the north side was  undertaken by a sapper platoon from the 8th Company of the Kiliński Battalion under Second Lieutenant Henryk Rzepecki, code-name Piotr. They were assisted by local residents who filled bags with sand. Over the next three nights, German tanks approaching from the Main Station side destroyed the initial phases of the barricade. That was when its design was modified. A decision was made to dig a trench to a depth of 1.5 metres below the road surface. The cut-through was to shield the two-sided heaped-earth barricade, fortified with paving stones, basalt slabs and earth-filled bags.

The construction of the northern side got off to a late start. Ultimately it led from the gateway of No. 22. It was rather shallow, since an obstacle was encountered – the tunnel of a below-ground commuter train. The cut-through was no more than 80 cm deep, so at that point the barricade had to be proportionately higher. Tram tracks were another obstacle. One of them was blown up, but the other remained intact and hindered traffic.

The crossing at Jerusalem Avenue became the sole link between the northern and southern sections of central Warsaw and was crossed daily by liaison girls and messengers carrying reports and orders. The link was also used to transport arms, food, ammunition and the wounded as well as by postmen distributing field mail – a stream of people flowing by.

Just before the fall of Powiśle on September 4-5th, several thousand refugees found themselves in the overpopulated City Centre North. A significant number made their way along the cut-through to City Centre South, where food and housing conditions were considerably better. At the start of September, hundreds of insurrectionists evacuated from Old Town travelled along the barricade. The wounded were taken to hospitals in City Centre South, whilst the remainder, following a brief rest, were sent to Czerniaków to continue the struggle. On September 5th, the Home Army’s Chief Command headed by General Tadeusz Komorowski  crossed the cut-through to their new headquarters at Pius XI Street (now Piękna). The insurrectionist radio station AK Błyskawica was also moved via that same route to its new location at 15 Poznańska Street. Its broadcasts could even be heard all the way in Britain.

Liaison girls, messengers, soldiers and medical services had preferential access to the crossing. Others had to queue patiently. On the north side they gathered in the vicinity of Widok Street, on the south side – at Nowogrodzka Street. On both sides, access to the passageway led through tenement cellars and courtyards. For security reasons, everyone wanting to cross had their identity papers checked. Once the traffic across Jerusalem Avenue reached 3,000 people a day, to ensure order and security on September 7th the commander of the uprising suspended unrestricted access. Henceforth, only those with special passes could cross. 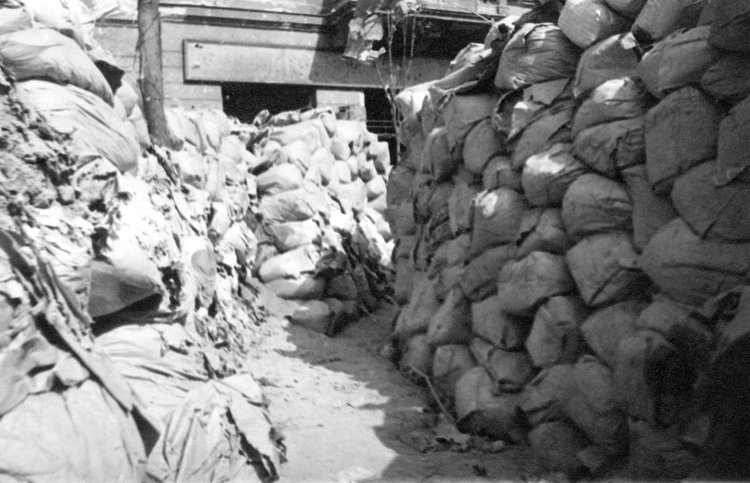 Since the passageway was narrow, traffic passed through on a rotational basis, mainly at night. Many years later Jerzy Jezierski, a soldier of the Bełt Battalion, recalled: “When night approached, people were let through, chiefly liaison personnel. Someone would shout ‘Twenty-two coming through’, and they let people through on their side. Later, when they had stopped the traffic for a while, they would shout ‘Seventeen coming through’, and we would let people on our side through, and all of this was taking place under fire. […] Many people were killed and many were wounded. That was the most precarious crossing.”

In mid-September, an order was issued regarding the construction of a second crossing of Jerusalem Avenue near Krucza Street. Cut-through No. 1 would now be reserved for incoming traffic from the north, whereas cut-through No. 2 would be meant for traffic from the south. An underground corridor beneath Jerusalem Avenue was ready in the latter half of September, but little is known about how it functioned and to what extent it was used.

From the north, the barricade was defended by the 8th Company of the Kiliński Battalion commanded by Lieutenant Edward Paszkowski, code-name Wiktor. From the north, its defenders were the soldiers of Bełt Battalion led by Lieutenant Kazimierz Przecławski, and Second Lieutenant Zenon Wiktorczyk. They had been entrusted with an exceptionally difficult and responsible task. The barricade was under unending German fire from the area of the National Economic Bank. Cristal Restaurant (16 Bracka Street), the Café Club (Nowy Świat 15 at Jerusalem Avenue), Hotel Polonia (Jerusalem Avenue at Poznańska Street) and Żywiec Restaurant (36 Jerusalem Avenue at Marszałkowska). Time and again, the Germans tried to destroy the burdensome obstacle with tank fire and sent their Goliath remote-controlled tankettes in against it. After each attack, the cut-through was laboriously repaired.

Ultimately, it was the insurrectionists that won the battle for the barricade. Thanks to their dedication and determination, right until the very end of the uprising not a single German vehicle was able to make it down Jerusalem Avenue.

The barricade is now commemorated by a memorial plaque enshrined on a building located at 23 Jerusalem Avenue.