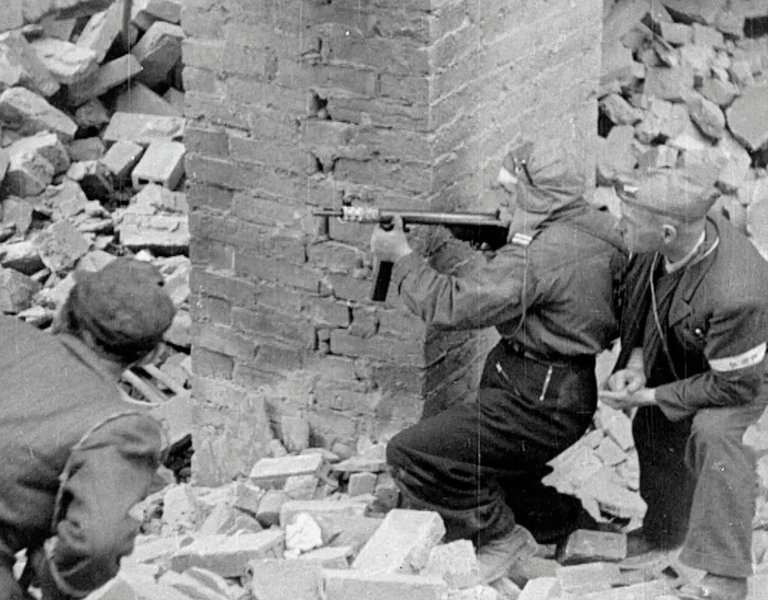 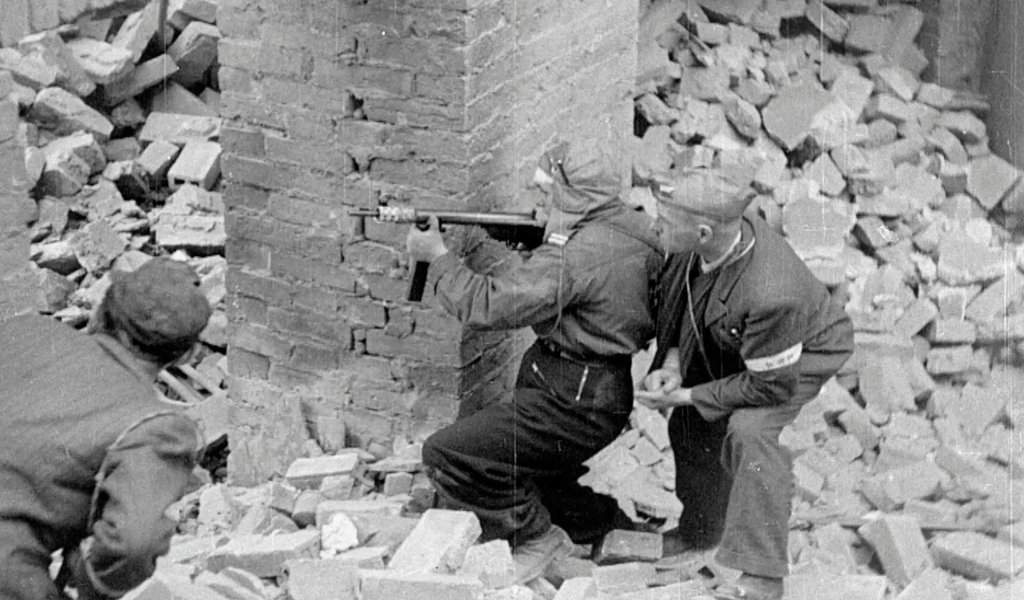 Portrait of a Woman Soldier

The film director Marianna Bukowski tells Polska.pl about her new film, a documentary about the Warsaw Uprising seen through the eyes of one of its fighters, Wanda Traczyk-Stawska (who went by the pseudonym of “Doughnut”). The Polish premiere of the film took place on 13 July 2015 at the Warsaw Uprising Museum.

Magdalena Majewska, Polska.pl: What is your film about?

Marianna Bukowski*: I based the film on the history of the Warsaw Uprising, told through the perspective of one person. I wanted the film to be interesting to a Polish audience, which is well versed in the history of the Uprising, but also for people who had never heard of the Uprising before. I now live in London, before that I lived in Sweden, and I find that people in both places know little about what happened during the Warsaw Uprising – often confusing it with the Warsaw Ghetto Uprising. The film has a lot of information about why the Warsaw Uprising started, how long it lasted, how it ended as well as its aftermath. It also contains personal moments and first-person accounts by the documentary’s protagonist, moments which would not have been included in a feature film due to time constraints. I wanted viewers to be able to understand the Uprising, to identify with those who had fought in it. The film looks at women during the Uprising, but it also offers a snapshot of the human condition, of what it is like to be young and caught in the midst of a brutal war. For me this was very important, as there are very few films about Polish history made for a foreign audience. 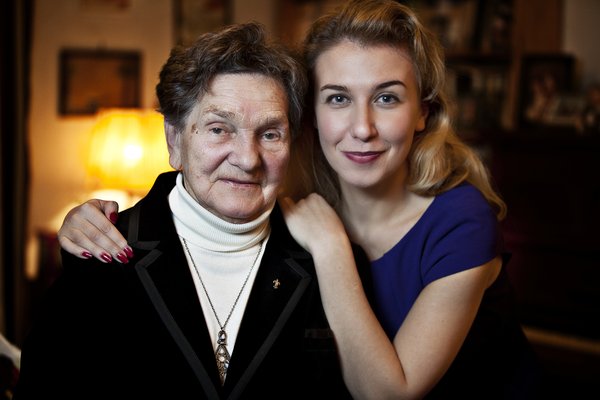 How long did you work on the film?

I recorded Wanda’s testimony over seven years. She has basically become my friend. I met her for the first time in 2004, which means that we’ve known each other for 11 years. Our taped conversations created a total of 11 hours of footage. It took me a long time to edit the footage, so that it all fits together smoothly. There were times when I had to take the beginning of a story, which Wanda told me in 2008, and then link it together with its ending taken from footage recorded in 2011 – I had to piece it all together, like a puzzle.  Wanda was a tomboy: she liked to play football and run around a lot, which later helped her in the Uprising. She was typical for many people of that generation, and yet she was also unique. She told me a lot of interesting stories relating to the Uprising, however a lot of them were difficult to portray on screen so I wasn’t able to use them in the film.

You chose to use illustrations to depict some of the stories told in the film, for example we see ink trickling down a piece of paper when the protagonist tells us about secret lessons organised by the Underground. Or when we see blood flowing down the gutters after Poles were lined up and shot right next to where her lessons took place.

When I visited the spot where the secret lessons took place, and where the people were shot, I noticed that it had become a cinema, in a completely new building. So I wasn’t able to film anything there. Instead I thought about the inkblots that had probably formed on Wanda and her classmates’ pages while they sat and waited for the Germans to move on. I also showed Wanda’s original textbooks, with her handwriting in them. I do a lot of commercials and I like taking an abstract approach to story telling. But the film has its limits. I wasn’t able to realise all of my ideas, due to my limited budget as an independent film-maker. Perhaps it works better this way. The film is subtle and delicate; it is, after all, an intimate account.

Did you use other Warsaw Uprising chronicles when making your film?

I watched all of the chronicles available at the National Film Institute. I chose particular scenes. There are moments in my film when we see Wanda talking about the leaders of the Uprising, for example Antoni Chruściel (“Monter”) or the photographs of Eugeniusz Lokajski (“Brok”). I show photos of their faces when Wanda talks about them. I also wanted to show that the situations that Wanda described were not unique, they were representative of what happened during the Uprising. Many girls and boys took part in the Uprising, which is why some of the photos of Wanda show her together with other people. I spent a lot of time look for archival footage, which would fit well with the given stories. The photographs I used are from Wanda’s collection, from the Warsaw Uprising Museum, as well as from the archive of Jerzy Tomaszewski, who took over 2,000 photographs during the Uprising. It is Tomaszewski’s photos of smiling combatants that we see when Wanda says: “A soldier is brave when he is not alone, when he has friends, when he knows that there are people who will rescue him. We were the closest of friends. Even in the most difficult of times, after tough fighting, we were able to roll over in laughter. This was unique to the Warsaw Uprising.” This collection was the first set of photos of the Uprising that I saw as a child and they have remained etched in my memory. Although they are dirty and tired, the people on the photos are all smiling so widely, looking so happy. I love these photos. I wanted to use these photos to help the viewer get a glimpse of that world. 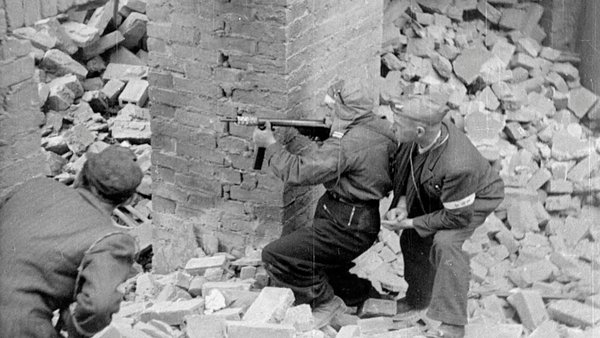 Wanda Traczyk-Stawska, nom de guerre “Pączek,” fought in the Screening Detachment of the Military Publishing House in the northern and southern parts of downtown Warsaw. Insurgent newsreels show her holding a Lightning machine gun, surrounded by soldiers fighting in the northern part of downtown Warsaw. She took up arms because she considered impotence to be the worst thing during the wartime German occupation. She wanted to be able to defend herself. The Warsaw Uprising saw many more women like her. They were aged from mid-teens to mid-twenties.

“The civilian population was the bravest, most incredible of all. It is thanks to civilians that the Warsaw Uprising lasted as long as 63 days. Courage is being able to be as afraid as the civilian population and yet survive without weapons. While at the same time calling us, the Uprising fighters, “our children.” This was Warsaw,” Wanda Traczyk-Stawska in the film “Portrait of a Soldier.”

Why did you choose to make a film about the Uprising?

I am very interested in Polish history. The Warsaw Uprising is a beautiful tragedy in its own right and I feel a special connection to it. I have read a lot about the Uprising and I think that changes a person on the inside. It changes how you see life, makes you rethink your priorities. I was born in Warsaw but I emigrated to Sweden before Martial Law in 1981. My whole family is from Warsaw. My grandmother was part of the resistance, but she gave birth to her first child three months before the Uprising. As a result, she was a civilian during the Uprising. That is why I have dedicated a lot of space in my film to the Uprising’s civilians, and civilian victims. Their fate was, as Wanda puts, often much harder than that of the combatants. How terrifying it must have been for people such as my grandmother, with a baby in her arms, without food, without a home, without anything. There is this great story Wanda told me, which I didn’t end up using mainly due to financial constraints. In Wanda’s group there was this boy who had a wife and an infant child, a baby. As they crawled on the ground, across a barricade, to get across Foksal Street, the girl gripped the baby with her teeth, pulling it along. Like a lioness with her cub. An incredibly powerful scene. 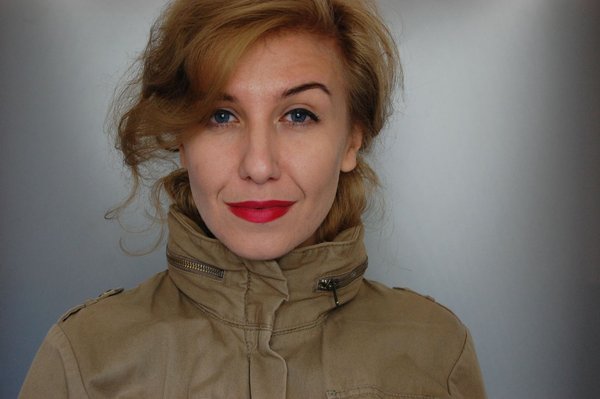 *Marianna Bukowski – a film director and producer. Born in Warsaw, she has lived in Sweden, studied in New York and currently lives in London. She has worked on historical productions for Discovery and the History Channel, amongst others. In 2014, she was a producer for Sky Vision’s documentary series “Heroes of War: Poland”, during which she did episodes on Enigma and Żegota. She has also created commercials for Channel 4, in Great Britain.  “Portrait of a Soldier” is her first independent film. The documentary was screened in June 2015 at Sheffield Doc/Fest, the international documentary film festival in Great Britain. It will be available on iTunes from 8 September. The film will be shown on Telewizja Polska, Poland’s public broadcaster, on 6 October.