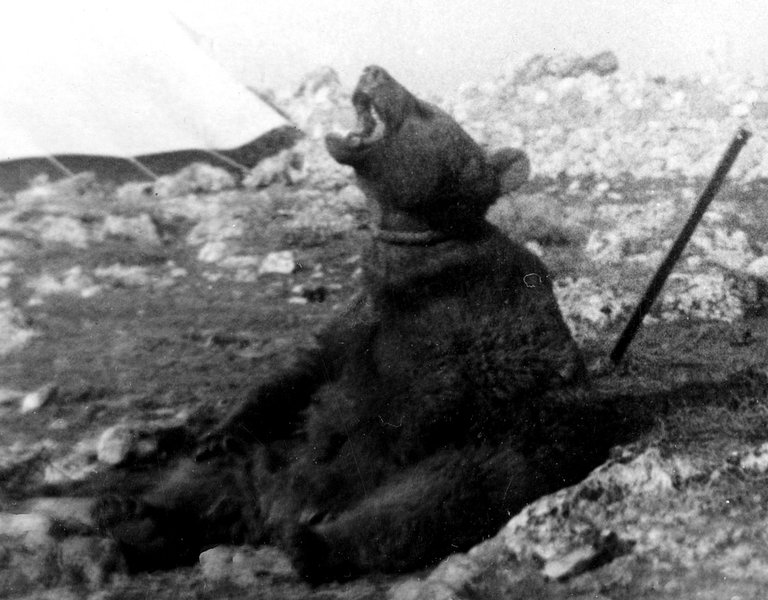 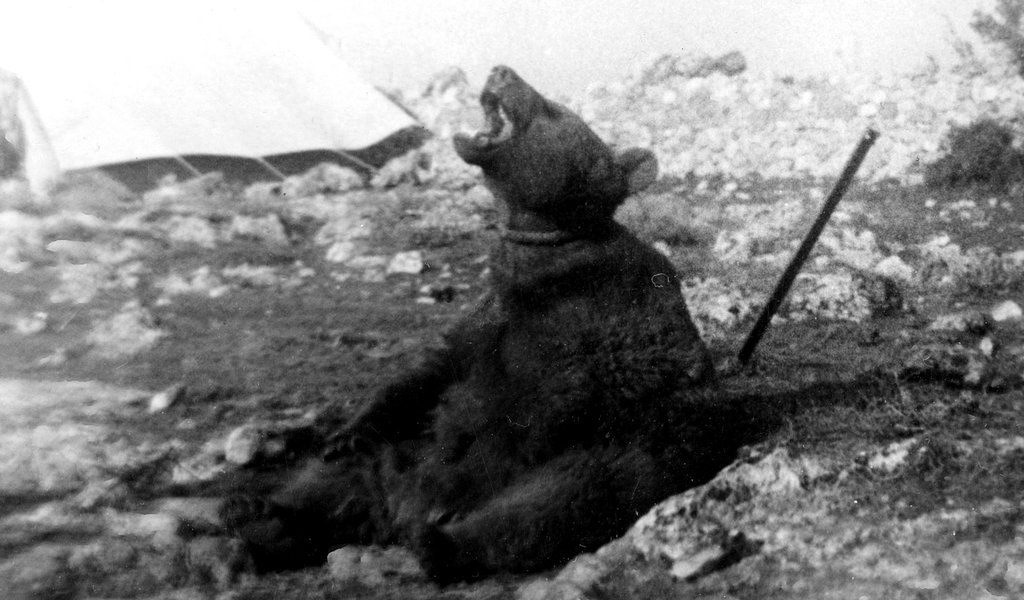 The soldier who ate 300 apples a day

During World War II, Wojtek the Bear, a soldier like no other, accompanied Anders’ Army on their trail from Iran to Scotland. A monument of Wojtek the Bear was unveiled on 7 November in Edinburgh’s city centre.

He liberated Monte Cassino, slept nestling other soldiers, smoked cigarettes and sometimes even drank beer. He was the only troop member who could officially get away with such bad habits. Yet all these privileges were well-deserved, as he joined the ranks of Anders’ Army and took on their combat trail. Wojtek the Bear, bought by Polish soldiers for a can of food in the Iranian city of Pahlevi in 1942, will soon have a fifth monument dedicated to his memory. This one will be in Edinburgh, where on 2 December 1963 Wojtek passed away in the local zoo. 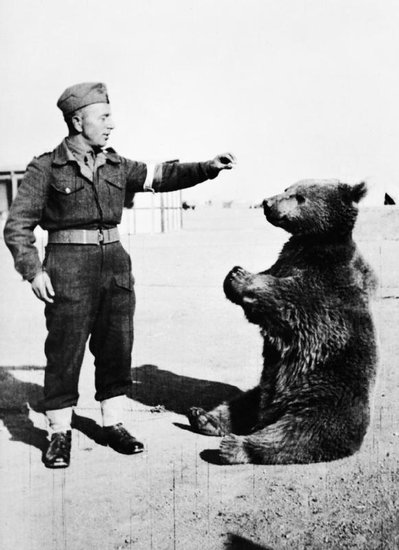 When the soldiers of Anders’ Army bought Wojtek on their way to Palestine, the bear, who was probably less than a year old at the time, could not even feed himself. The Polish troops fed him with diluted condensed milk from a bottle and a nipple made of twisted rags. Apart from milk, the cub ate the same food as the soldiers and dined with them. However, more often than not, he also received special treats - fruit, sweet syrups, marmalade and honey.

Officially enlisted as a soldier of the 22th Artillery Supply Company, which formed part of the 2nd Artillery Group of the Polish Armed Forces in the West, he accompanied the unit on its trek from Iran through Iraq, Syria, Palestine, Egypt to Italy, and after demobilisation, to the United Kingdom. As the Company’s mascot, he snuggled soldiers in his sleep, he loved to travel in the driver’s cab and in the cargo bed of army trucks, and he enjoyed wrestling with fellow soldiers just for fun. He usually won, knocking soldiers to the ground, yet he always licked their faces afterwards to cheer them up.

"There were a lot of mascots in the Polish Armed Forces in the West - mostly dogs, which prevailed in the Air Force and the Navy - but Wojtek was unique. Apart from him, there was another bear in the Polish troops in the West, but he did not leave the Middle East. Bears had always been associated with the Carpathians, thus Wojtek was a symbol of what was, and what was no more, in Poland. Polish soldiers wanted to prove that even animals helped in the fight," Professor Zbigniew Wawer, a historian and director of the Polish Army Museum, told Polska.pl.

The Polish Armed Forces in the USSR, known as Anders’ Army after the name of the commanding officer, Major General Władysław Anders, was created as a result of the Sikorski-Mayski agreement signed in July 1941 (after the June aggression of the Third Reich on the Soviet Union). The army included mainly Polish citizens who had been interrogated in NKVD prisons or deported to labour camps - gulags - in the deepest regions of the USSR.

Politically, Polish Army troops were assigned to the Government of the Republic of Poland in exile, while operationally they were commanded by the Red Army. On 11 August 1941, the Commander-in-Chief vested the command of the army to General Anders, who had been detained by the NKVD in the Lubyanka prison in Moscow. Due to obstacles created by the Soviet authorities, Anders’ Army never gained its full composition in terms of the number of soldiers. In March 1942 it amounted to around 66,000 people. Due to the deterioriation of Polish-Soviet relations, the army was evacuated to Iran in 1942. The soldiers were accompanied by civilians, therefore in total some 114,000 people left the USSR at that time.

After the evacuation, General Anders became the commander of the Polish Armed Forces in the East (Iraq, Palestine) and of the Polish 2nd Corps, which he led during the Italian campaign. Anders’ soldiers participated in combat missions such as the Battle of Monte Cassino and the Battle of Ancona. 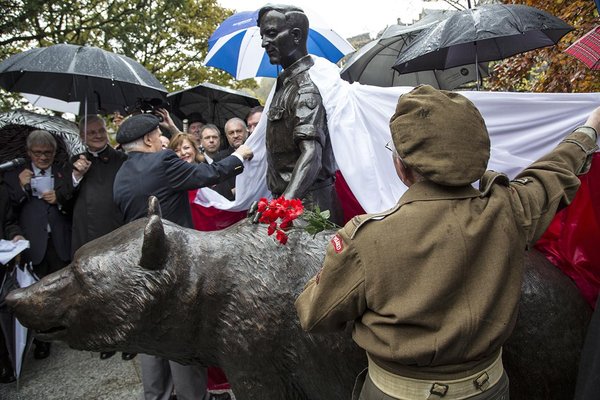 Wojtek’s role in the Battle of Monte Cassino, where he helped soldiers lift heavy boxes full of artillery ammunition, was legendary. It is said that the bear did not drop a single box. This was how a bear holding a missile became the symbol of the 22th Company and Wojtek badges appeared on uniforms, pennants and military vehicles.

After the war, Wojtek’s unit was transported to Glasgow, Scotland. In Winfield Park, Wojtek became a favourite of the local community and the star of newspaper articles. He even became a member of the local Polish Scottish Society.

After the demobilisation of the unit in November 1947, soldiers were forced to place Wojtek in a local zoo, on the condition that the director did not give the bear away to anyone without the consent of the Company commander, Major Antoni Chełkowski. Until his death on 2 December 2 1963, Wojtek the Bear could count on his fellow soldiers, who often crossed the fence to visit him. He was also famous among the Scots. A testament to his popularity is the fact that his death was announced by British radio stations, with a precise indication of his weight (500 pounds, or 250 kg) and height (over 6 feet, or 180 cm).

Wojtek became famous among the children of Polish immigrants in the United Kingdom because of the many books written about him. The first story of Wojtek was written in 1968 by Wiesław Lasocki, exiled to the Soviet Union during World War II and then enlisted in Anders’ Army, who settled in London after the war. His book entitled Wojtek spod Monte Cassino was translated into English (under the title Soldier Bear) in 1971. The story of the Corporal Bear was also depicted by Aileen Orr in her book Wojtek the Bear: Polish War Hero. "The bear offered a legend which was attractive to children and youth and which became extremely popular both in exile and in Poland after 1990, when the book was published in Poland free of charge," said Professor Zbigniew Wawer. 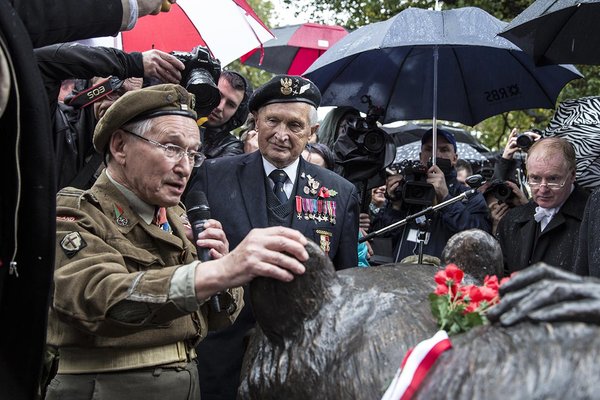 Richard Lucas, one of the driving forces behind Wojtek’s monument in Krakow, said that the Polish bear encouraged young Britons to learn about the history of World War II - and he continues to do so, to this day. "When you learn about Wojtek, you have to remember about Polish history. Thanks to this bear, the whole world will learn about the Anders’ Army and about those times," Richard Lucas told Polska.pl.

The first statue of Wojtek stood at the Sikorski Institute in London. The second one is in Żagań near the border with Germany, where a local school was named the General Władysław Anders School. The third monument was unveiled in May 2014, on the 70th anniversary of the Battle of Monte Cassino, in the Jordan Park in Krakow. The fourth one was erected in April 2015 in Imola in northern Italy, which was liberated by Anders’ Army. The Scottish monument in Edinburgh will be the fifth.

The ceremony was attended by the last surviving soldier of the 22th Artillery Supply Company, Professor Wojciech Narębski, a geologist who during his time in the unit went by the name of Little Wojtek, to distinguish himself from Wojtek the Bear. 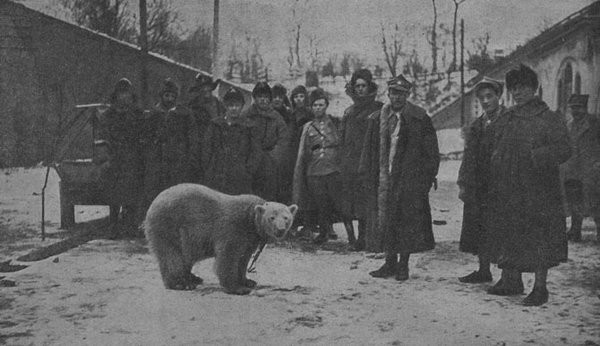 Wojtek the Bear was not the only soldier bear who became famous in the military. During World War I, a white bear named Baśka, adopted in northern Russia by the Murmansk Battalion led by Colonel Julian Skokowski, also followed the combat trail with her unit. The Battalion was a division of General Dowbor-Muśnicki’s corps operating in the Murmansk region. Baśka became the daughter of the regiment in the Battalion’s machine gun company. She was assigned rations and a guardian, Corporal Smorgoński, who took care of her for the rest of her life. Smorgoński taught Baśka basic military drill movements, which she paraded in front of Marshal Piłsudski at the Warsaw Saxon Square in 1919. She even shook the Marshal’s hand when he greeted her. After the Battalion arrived in independent Poland, she was stationed with her unit in the Modlin Fortress near Warsaw.

Baśka died a tragic death. During her first winter in Poland, she broke the chain that she was attached to while bathing in the Vistula River and swam among the ice floes across the river. When she reached the village, she was stabbed with pitchforks by local peasants, who wanted to skin her for her fur. Today she is the symbol of the Modlin Fortress and the heroine of a tourist trail for children and their parents. “The Baśka Murmańska trail, modelled on an urban game in which children must find hidden figures of a bear, is an excellent opportunity to learn about the history of World War I and offers lots of fun for the whole family. Not only does she attract younger tourists to the Modlin Fortress, but she also promotes historical knowledge," Marek Kozubal, Rzeczpospolita journalist focusing on history and the uniformed services, told Polska.pl.