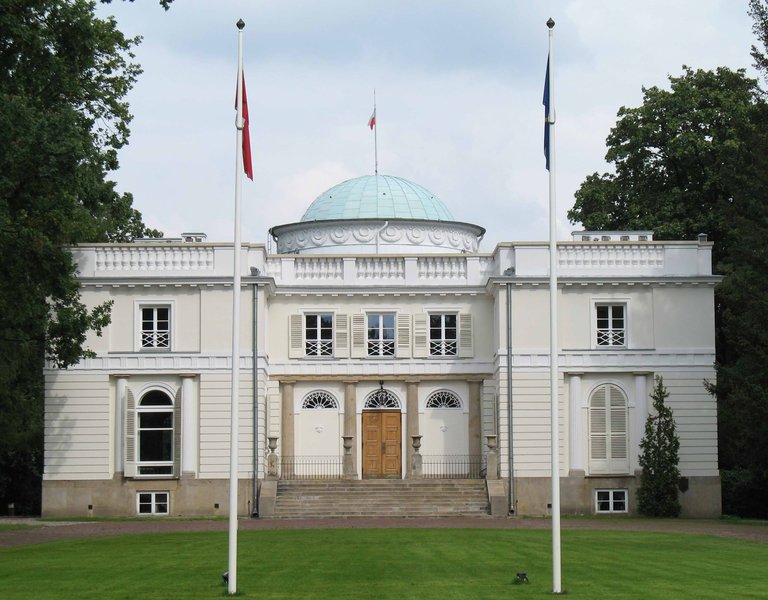 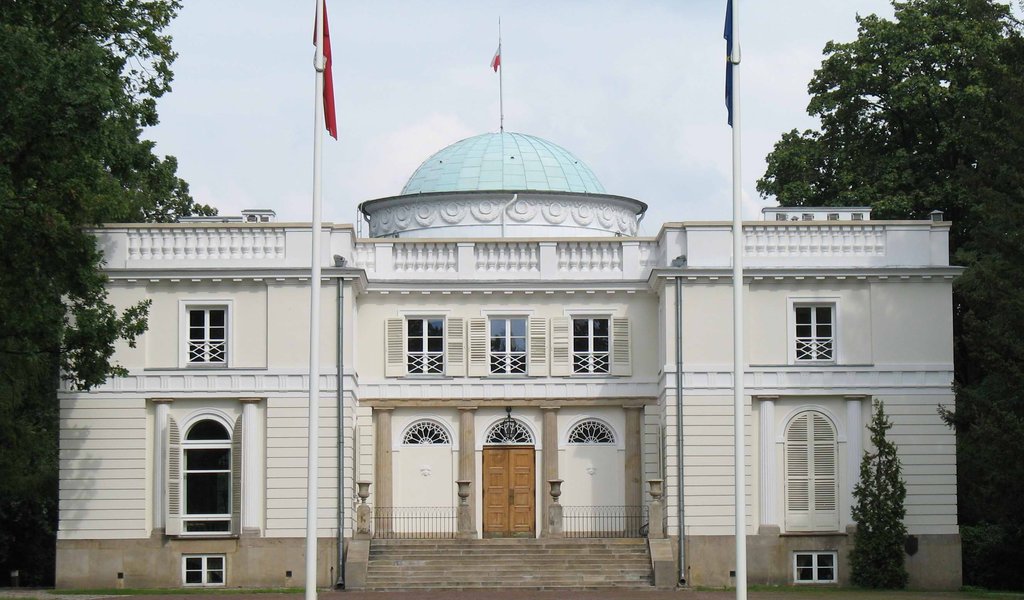 A breeding ground for Europe’s elites

The multicultural melting pot in Warsaw’s Natolin district educates future cadres of European institutions. Only the best and the brightest are accepted. Courses run for a year and are very demanding. Also on the wallet.

When I enter the campus, I’m greeted by a flag of the People’s Republic of China. Although an 18th-century palace, once Bolesław Bierut’s residence, it is tucked away in a reserve, you can still hear the city’s noise from here. The restaurant is a hustle: oriental dishes are getting fixed for the evening exclusive event being prepared for the exclusive event held in the evening. The fenced premises are guarded by security.

It’s not a wedding party at the Chinese consulate, but rather the so-called national day, a long-standing custom at the College of Europe in Warsaw. Situated within the Natolin palace and park complex, the campus is the sole branch of the College of Europe in Bruges, a breeding ground for the staff of European institutions, set up in 1949. This year marks its twenty-fifth anniversary.

“We guarantee one of the best diplomas in European studies in the Old Continent,” says Ewa Ośniecka-Tamecka, the vice-rector, before going on to tell the story of the Natolin campus and its beginnings. “Our college was originally intended to prepare Central and Eastern Europe for work with EEC structures. And making the West more sensitive to our part of Europe. Since 2004, we want to focus on the Union’s neighbourhood, especially in the East.”

Before communism fell, the College of Europe in Bruges had ten Poles among its graduates. A real boom started after 1992,  that is when the Natolin campus opened. A total of over 400 people have graduated from it.

“Earlier on, students from our part of Europe had no access to such schools. 94 per cent of the students came from the West. We used to be perceived as the ‘rest of the world,’” says Ośniecka-Tamecka. The situation changed once quotas were introduced. “On opening the campus in Natolin, the Polish government made one condition to the Belgians: 50 per cent of students will come from Western Europe, while 50 per cent will come from Central and Eastern Europe,” the vice-rector recounts.

Almost as if we were in New Zealand

Aleksandra Brodowska, 24, is a blue-eyed gentle blonde. She likes sport and dance and has finished a ballet school (“When I’m tired of studying, I go dancing or play football with the boys"). She came from Gdynia to study law at the University of Warsaw.

“I’m into international law and security,” she says, adding that she chose Natolin because “it offers a balance between a theoretical academic profile and practice.” Julie Perain, a 25-year-old black-haired student from France, echoes: “The course offering suites my needs. I’m interested in everything about EU borders,” she says. Julie plans to stay in Poland for good. She would like to work at Frontex, an agency based in Warsaw.

“That’s a lot. But almost all students receive scholarships. Poles, though, must spend at least two months on placement with the MFA or another ministry,” says Richard Washington of Great Britain, Director of Communications and Recruitment and a College graduate. He’s in his 40s, smartly dressed and with a big smile on his bespectacled face. “I was already 35. I planned to return to the West after my studies and take a job in Brussels. But I took a liking to Poland, so I stayed. I learnt the language, even though at the start all I could say in Polish were just a few simple words,” he says, amused.

The majority of campus residents are MA graduates in political science, journalism, and international relations. The campus currently has 130 students from 34 countries. The most represented are France (20), Poland (18), Ukraine (12) and Italy (10). But it’s not only Europeans who study here — there are two Chinese, a Pakistani and a New Zealander, among others.

“In a New Zealander’s eyes Poland is something akin to… Russia. I was afraid it would be a cold backwater,” recalls Alexander Prenter, a 24-year-old graduate in ancient history from the University of Auckland. He’s of medium height, with dark blond curly hair and wearing a grey hoodie. Upon arrival, his notion about Poland was about to change. “When I got off the plane, I realised my ideas about Poland had been all wrong. Actually, it’s very similar to New Zealand here,” he admits. Alexander found out about the Natolin campus from the internet. He sees his future as working for the UN or perhaps returning to New Zealand.

From Homer to Frexit

Roman Zagorodniy has no doubts about returning to his home country. He’s 22 and came to Warsaw to study economics right after finishing his secondary school. Why did he choose the College? “It’s one of the best schools in Europe. I’d like to apply my knowledge in Ukraine and help it grow. We want to be part of the European Union,” he says in Polish. “I like it very much in Poland. Whenever I leave for Warsaw, I don’t say I’m going abroad, but home,” he stresses.

The studies are interdisciplinary, and students choose courses that they find interesting. The schedule changes each week depending on the visiting lecturers. Each year, the College is visited by 70 professors from 25 countries.

“It’s not only the curriculum that is interdisciplinary, but the professors, too. We have a mix of different teaching methodologies and student approaches here. A bit of French, Polish, and British style, and so on. It’s interesting,” Roman says.

“The aim is to encourage students (and not only them) to look at European affairs from a broader perspective. Today, all of Europe is in crisis. Technocracy is over. That’s why in our imagination we must go back to the past, to the wealth of European civilisation,” says Professor Butterwick-Pawlikowski. Among the courses he teaches is an introduction to the history of European civilisation. “I start with Home­r and finish with Brexit. “Maybe next year Frexit will become part of the curriculum?” he wonders.

“Students study a great deal. And often complain about that,” Ośniecka-Tamecka says. Classes usually run from morning till evening. Natolin is not only about studying, though. It is also home to a multicultural melting pot and vibrant student life. I had a chat with a security guard: “A lot of Ukrainians study here. Do you know what they do? They come to the campus on scooters. And ride them … on ice!” he says excitedly, and adds a moment later: “No Pole would ever ride like that…”

“Natolin is different from other colleges in that we all study and hang here; we just live here all together on the same campus. We sleep in the same halls, eat at the same canteen; we’re together round the clock. People live close to one another here,” says Perain. “We have the faculty living with us in the halls. They are around after lectures, for example at the canteen. They are always available; you just knock on their door,” Zagorodniy adds.

Week-long trips abroad are a tradition: to Ukraine, Georgia, Armenia, the Baltics, the Visegrad countries, and Brussels. Each year the select few fly to New York, for a simulated UN session.

Students often celebrate their national days to promote their home countries. Events include games, exhibitions, and tastings of regional food products. Also held are conferences on individual states’ relations with the European Union, and meetings with invited ambassadors. On 11 November, the Natolin palace hosts concerts.

“On Fridays and Saturdays we throw parties to forget about our studies for a while,” says David Lodder, 26, of the Netherlands. He learned about the College during his work at the European Commission. Before Warsaw, he lived in Krakow and Prague. David sits on a committee that runs the bar and is on the editorial board of students’ Natolinblog.com.

Mr Lodder reveals that things are not always so rosy in Natolin. “Sometimes the cultural differences are hard to tackle. But even they teach us something. Besides, we live on a closed campus, far away from the city centre. That somehow makes it difficult to savour Polish culture. Fortunately, we often make trips around Poland, mostly on weekends. Last time it was Olsztyn,” he says.

The College of Europe campus sits on the complex of the Natolin European Centre, a foundation set up by the Polish government. “How come our Campus is not more widely known in Poland? It’s hard for me to say. Maybe because it’s just 25 years old and unlike any other institution? I try to attract bright Polish students. I’d like them to be the best. Yet, as far as academic performance is concerned, the top twenty usually includes students from the UK, France, and Germany, seldom Poland,” says Ośniecka-Tamecka.