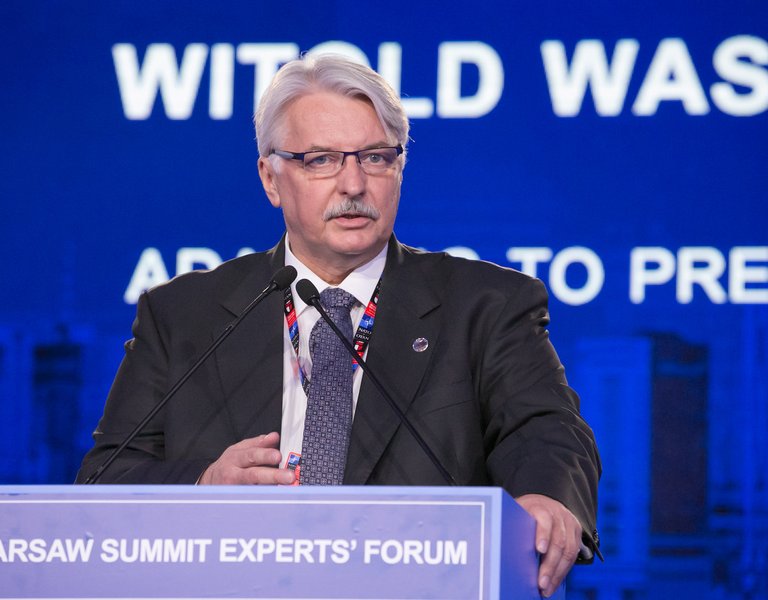 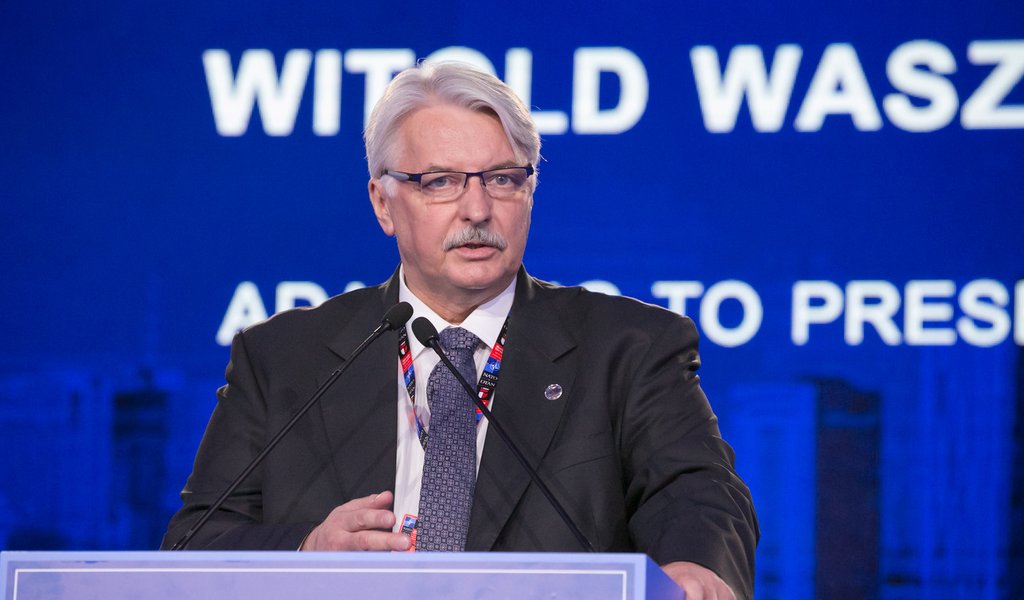 Central Eastern Europe cannot be an appendage to Western Europe – says Minister Witold Waszczykowski in an interview with “Nasz Dziennik”.

Piotr Falkowski: With the brief summer break coming to a close, a new season is about to start. How well prepared is Polish foreign policy for the new season?

Witold Waszczykowski: In recent months we have focused on two important challenges facing our country. The first is the issue of security. I would like to stress that when it came to power, Law and Justice found Poland within a difficult international dynamic. Since the NATO Summit in Newport, the situation in our region had taken a turn for the worse due to the conflict in Eastern Ukraine and Russia’s actions. In addition, the decisions taken by the NATO Alliance in recent years did not provide the necessary security guarantees. Andrzej Duda spoke about this last year, first as a candidate and then later as president. That explains why, upon the change of government, President Duda and the Polish diplomatic corps have taken intense steps aimed at increasing the level of our security. The result of these measures were the decisions made during the NATO Summit in Warsaw, a summit that was a great success for us, on an organizational level as well. The second area of these intensified efforts involves increasing regional co-operation. I am convinced that Central Eastern Europe cannot be an appendage to Western Europe, which for many years has acted as a centre for European integration. Countries in our region should not be treated merely as a transit area between the West and Russia. That is why we are working very closely with our partners within the framework of the Visegrad Group as well as our close ally Romania. The two main strategic aims of the last few months have been focused on bi-lateral and multi-lateral political consultations as well as a wide range of foreign visits, including visits by foreign ministers to Warsaw.

It seemed that the Ministry of Foreign Affairs was not prepared to implement the programme that you brought with you to the ministry.

It is worth pointing out I took over the ministry not from Radoslaw Sikorski –who, as we know for better or for worse had his own ideas and my views of them are widely known – but from Grzegorz Schetyna, who I would say ended up in the MFA by chance. After all, Grzegorz Schetyna was not widely known in diplomatic circles. Apart from that, while he was foreign minister Grzegorz Schetyna was also deeply involved in an election campaign which lasted many months. He led the campaign in a constituency that was not his own. All of this had an impact on how the ministry functioned. I took over a ministry which for many months was only carrying out routine tasks. My predecessor spent many months fighting for his own survival within his party as well as the government, a bid he ended up losing. Therefore in many respects and in many areas we had to start from scratch.

In terms of the NATO Summit, the opposition has said that all we did was take over the organizational aspect of the event, which had already been prepared by our predecessors. Although it is true that documents show that the decisions to start political, logistic and financial preparations for the Summit were indeed made by our predecessors, it is worth asking the question when this actually took place? And the answer is 27 October of last year, two days after their election defeat! Can one really therefore say that preparations for the Summit were made in three weeks? The answer to this question is pretty obvious.

Moreover, upon coming to power we found a region that was completely divided after the decision by the Polish government to back out of Visegrad Group agreements. Furthermore, the Weimar Triangle was paralysed. Only now has it been possible to rebuild these relations laboriously and to convince our French and German partners to reactivate this initiative, giving it new momentum. We also had a visible breakdown in Polish-British relations and, after all, this is Europe’s second and the world’s fifth economy, a permanent member of the Security Council.

In a similar vein, as I have mentioned on many occasions in the past including in the Sejm while presenting Poland’s foreign policy priorities, in recent years there has been a complete collapse in terms of Eastern policy. It turns out that it was we who excluded ourselves from initiatives such as the Minsk and Normandy formats. Poland could also have been a patron of these important agreements and have played a role in their implementation.

Our relations with the United States also took a turn for the worse. The Middle East was completely neglected by the PO-PSL government – when we pulled out our troops from the UN peacekeeping mission in the region we lost important instruments with regards to political relations. As a result, our starting point was at a pretty low level and we had to rebuild relations from scratch in many areas.

But a change in policy requires the right team. One often hears the critique that changes in key MFA positions have been too slow in the making, especially with regards to ambassadors.

Let us not forget that the replacement of ambassadors is a process that takes many months and is dependent on many national and international factors. It is the MFA's intention to make sure that the time that the head of mission vacancies are left unfilled is kept as brief as possible. Factors such as the political calendar of the receiving country is taken into consideration when setting the date for each ambassador to be recalled. This is very important.

Furthermore, foreign policy always has an element of continuity. Even if many mistakes were made in the past, Poland has held certain positions that cannot be simply changed from one day to another. Due to two very important events which took place in our country – the NATO Summit and World Youth Day – the sudden lack of ambassadors would have meant that the missions would need to be run by lower ranking diplomats.

These, in turn, would not be able to carry out their duties due to the restrictions of diplomatic protocol. For example, they wouldn’t have access to contacts at the right level. We wouldn’t have been able to properly promote Poland’s interests in Washington D.C., Paris and other important capitals.

On the other hand, are you able to trust those diplomats who have stayed on out of necessity?

In the cases where I was absolutely sure that this loyalty was lacking, I made the necessary changes in a swift manner. I’m talking here about Madrid, as well as the representatives to the European Union and the Vatican. We also already have new ambassadors in places such as Berlin, Kiev and Moscow.

Since November 2015, 16 ambassadors have been recalled who have already left this postings, 5 ambassadors will leave their postings by 31 August and a further four ambassadors will return to Poland by 30 September.  More ambassadors will be recalled in the course of the year. The changes will also cover consulates as well as Polish Institutes.

Then again, a lot of the new nominations are people with limited experience in the world of diplomacy.

Many of the people who were recently nominated to be ambassadors previously spent many years working in diplomatic missions and have ample diplomatic experience. Our ambassadors in Germany and Russia were previously posted in these countries. However, in many other cases the new ambassadors have a lot of international experience in addition to experience working in their designated country. The candidate to become ambassador in the United States is an Americanist, an academic, who spent many years in the U.S. on various academic scholarships and research fellowships. He enjoys a very good relationship with Americans and the Polish community in the country, and he specializes in U.S. international policy.

Moreover, in the big diplomatic missions, the ambassador has at his disposal a big team of diplomatic staff, who help with routine business. Unfortunately we are currently suffering from the effects of not being in power for many years. We were not able to maintain reserve diplomatic corps, which would be ready to immediately to assume postings. This is impossible. We have to follow our common sense. Where it is possible we must draw on people with experience who were dismissed by the previous government. In many places, we are looking for new people who will realize our strategic goals as a result of their immense knowledge, international experience and excellent understanding of the country.

It is probably the case that many MFA employees are now trying to curry the favour of the new government, although they do no want to implement its programme.

I have been attached to the Ministry of Foreign Affairs for over 20 years and I have seen such situations with previous governments more than once. Of course, there will always be people like that. It is my hope that I am able to spot these individuals – and exactly because I have been attached to the Ministry for so long and I know many of these people personally or indirectly. If a diplomat suddenly transforms into a politician, then unfortunately we have to let him go. Unfortunately, there have been a number of cases such as these.