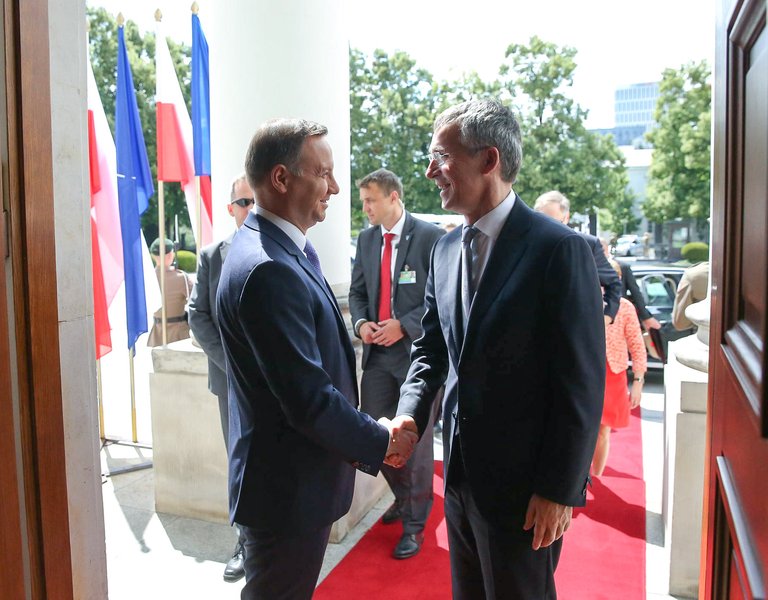 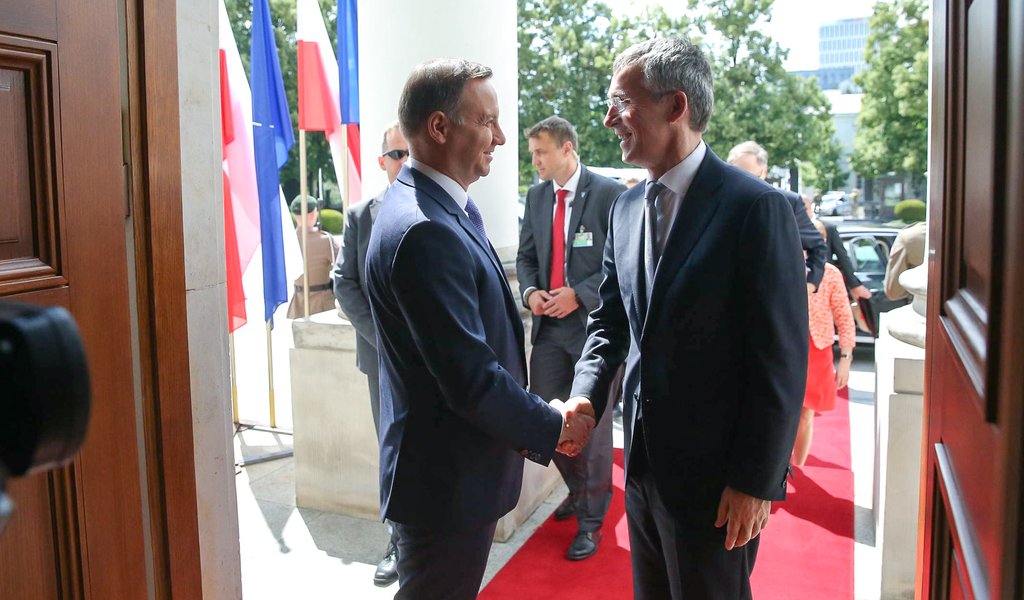 Duda and Stoltenberg: NATO’s Warsaw summit to demonstrate unity of the Alliance

During its summit in Warsaw, NATO will demonstrate unity, strength and the ability to provide an adequate response to the evolving security situation, president Andrzej Duda and NATO secretary general Jens Stoltenberg underlined in Warsaw on Thursday.

President Duda told journalists that he had held some final consultations with the NATO secretary general ahead of the Alliance’s summit, which will start in Warsaw on Friday and run until Saturday. He added that the talks had covered decisions to be made during the summit.

“The most important thing and something I would like to strongly emphasize is that the North Atlantic Alliance is demonstrating unity and will demonstrate unity over the coming two days. It will demonstrate that it is a living alliance, that it responds in an adequate way to the evolving security situation in the world, that there is mutual understanding among the Alliance members, that there is solidarity regarding all subjects, and that the ‘all for one, one for all’ principle is in force,” the president told a joint press conference with the NATO secretary general.

He noted that ever since its inception, NATO’s sole task had been to “defend the allied territory which is understood as a whole, without any division into spheres which would be more or less secure.”

“The Alliance is a whole and the security of each member state has equal importance for the whole. This is a great value of the Alliance. The Alliance has always upheld peace. Even at the most difficult of times, during the Cold War, the Alliance grew stronger to avert war, and it accomplished this mission,” said Mr Duda. He went on to add that NATO “has never been an aggressor, has never been an occupier.”

According to Mr Duda, “The Alliance’s task has always been to bring about and keep peace. And this continues to be the case today. It is of a defensive nature, its tasks are defensive, but it’s important that it should be effective and adequate to the changing situation and security environment.”

He pointed out that the security environment had changed in recent years. “The Alliance must and will make specific decisions to strengthen security wherever it’s necessary. Today, it is necessary here, on NATO’s eastern flank, and in the south. These are going to be the two most important elements of the decisions to be taken, and probably also of the debate,” emphasized the president.

In his words, the relevant decisions will be made mostly on Friday. At the same time, the summit’s discussions will also touch on other issues, including NATO-Ukraine relations and establishing security in Afghanistan.

The president said he was happy that “NATO is maintaining its open-door policy.” According to Mr Duda, this is testified by the attendance at the Warsaw summit of Montenegro’s prime minister, a country that signed a NATO accession protocol and will become the Alliance’s full member once all the member states have ratified this document.

Mr Stoltenberg observed that the world was a more dangerous place than only a few years ago, but NATO’s reaction to this had been quick and determined. He added that the Warsaw summit would take further steps to strengthen collective defence and deterrence, and project stability.

According to the Alliance’s chief, these steps involve increasing military presence in Poland and the Baltic states. “The decision to enhance NATO’s forward presence with four robust multi-national battalions, one in Poland and one in each of the Baltic countries, sends a very clear signal that NATO is ready to protect and defend every part of our territory. And that of course also goes for every part of Poland. And I think it is important to remember that the battalions which we will deploy to the eastern part of the alliance, they are an important message because they are multi-national, sending the clear message that an attack on one ally will be met by the response of the whole Alliance,” underscored Mr Stoltenberg.

“I think also it is important to remember that the battalions, the enhanced forward presence, is only one element in a comprehensive response from NATO. We have already done a lot when it comes to increased readiness and responsiveness of our forces, we have tripled the size of the NATO Response Force and we have established a new Spearhead Force which can be deployed in a matter of days. We will also have more pre-positioned equipment, supplies and we also do more training and we have increased, and increased the speed of our decision making if needed. So all of this enables both to have more forces in this part of the Alliance, in Poland and the Baltic countries, but it also enables us to reinforce forces quickly if needed,” said the NATO secretary general. He noted that no decisions had been taken yet on where the battalions would be stationed.

Moreover, the NATO secretary general identified the challenges facing the Alliance. “We will also step up our response to threats from the south. Increase our resilience against hybrid and cyber threats. And take our cooperation with the European Union to an ambitious new level,” he said.

This means that the NATO summit in Warsaw will be key in the Alliance’s history, opined Mr Stoltenberg. He went on to say that the meeting was being held in Warsaw, a city that knew the pain of conflict and the fundamental value of security.

In his view, the next two days will demonstrate “the unity and strength of our Alliance.” “And the decisions we’ll take will make us stronger and more prepared than ever for the challenges we face,” underlined Mr Stoltenberg.

Messrs Duda and Stoltenberg were asked whether the NATO-Russia Council could meet at a level higher than that of ambassadors (the ambassador-level meeting is scheduled for 13 July – PAP), and what would need to happen to make it possible.

“One simple thing has to happen, something that’s most important for peace to be reinstated. Respect for international law in other words,” answered Mr Duda. In his words, only then will it be possible to talk about Russia as “a partner for a serious dialogue who fulfils that basic, most crucial and fundamental condition which is a state with whom one can discuss in a serious way.”

According to the president, the other element is what the Alliance should do to be a partner for the Russians. “So it has to demonstrate what I have just referred to, that it is living, that it responds to the evolving security situation, that if a need arises it is capable of providing an adequate response,” stressed Mr Duda.

The president described the implementation of the Minsk agreements as the fundamental question. “There was an aggression against Ukraine perpetrated by Russia because I think nobody has got any doubt that so-called little green men or separatists, are people who are connected with Russia, they’re inspired there. We have seen the occupation and annexation of Crimea. So I think it is quite obvious what the international community especially what the North Atlantic Alliance expects from Russia today, to conduct a constructive and serious dialogue,” he said.

Mr Stoltenberg in turn emphasized that following the Russian aggression in Crimea NATO suspended “all practical cooperation” with Russia, while at same time “embark[ing] on the largest reinforcement of our collective defence since the end of the Cold War.” “But we did not suspend political dialogue with Russia, actually we decided to keep the channels for political dialogue open,” stressed Mr Stoltenberg, adding that that was the purpose of ambassadorial-level meetings.

“Because we strongly believe that there is no contradiction between strong defence and deterrence and political dialogue,” said the NATO secretary general.

He underscored that “we have to take this step by step.” “I think now we have to focus on our next meeting at ambassadorial level next week and then we have to take it step by step assessing whether we also should aim for a meeting at higher level, at ministerial level,” he added, while making it clear that it was too early to speculate when this would happen.

Duda and Stoltenberg were also asked what impact they thought Brexit would have on Great Britain’s participation in the NATO summit and London’s commitment to allied solidarity.

The NATO secretary general said that while the outcome of the UK referendum would change London’s relations with the EU, it would not change Britain’s position within NATO. “UK will continue as a strong and committed NATO ally and the Government of the UK, David Cameron, has very clearly stated that and that is important because the United Kingdom is a key ally,” said Stoltenberg.

As he pointed out, the UK provides close to one quarter of the defence spending among European NATO allies, British troops are taking part in many different NATO operations and missions, and the UK is a lead nation for the High Readiness Response Force. “The UK has strongly reaffirmed and confirmed that they will stand by all their NATO commitments,” added Mr Stoltenberg.

As Mr Duda remarked, irrespective of its fate in the EU, Great Britain would remain a NATO member and one of the strongest armies in the Alliance. He emphasized that there was no doubt that London’s activity within NATO would stay at least at the same level.

Furthermore, Mr Stoltenberg was asked whether NATO was consulted about holding an exhibition devoted to the Smolensk crash at the National Stadium during the summit on Friday and Saturday.