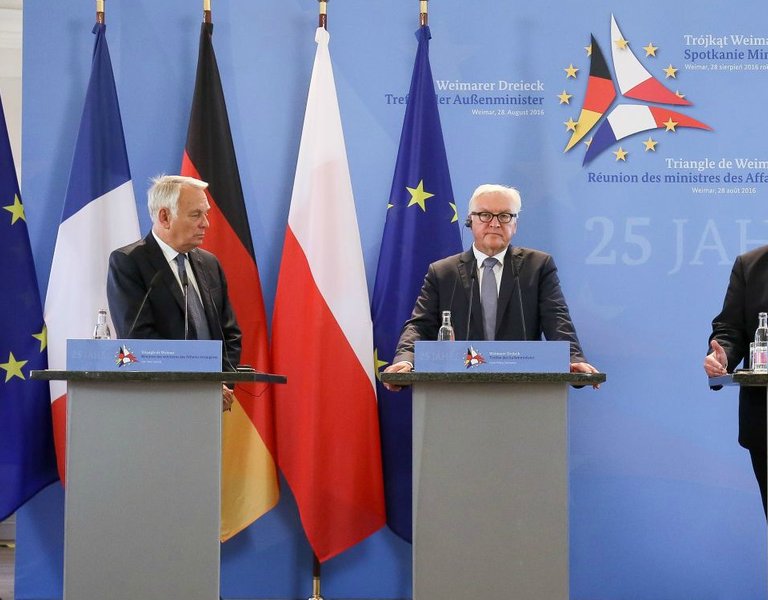 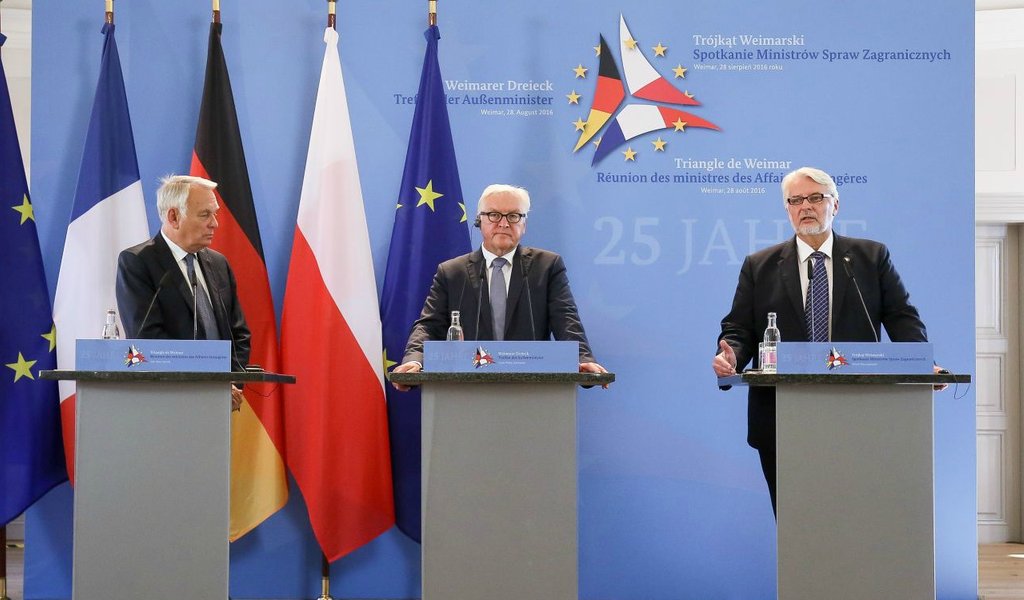 The future of the Weimar Triangle and the European Union following the UK referendum, as well as security in the Eastern and Southern Neighbourhood of the EU dominated the agenda of Minister Witold Waszczykowski’s meeting in Weimar with Minister Frank-Walter Steinmeier and Minister Jean-Marc Ayrault.

The foreign ministers of Poland, Germany and France met in Weimar to mark 25 years of the Weimar Triangle. “We are happy with the past 25 years, and we look forward to more years of fruitful cooperation,” said Minister Waszczykowski.

The ministers covered some of the most important items on the European agenda, including Brexit, the migrant crisis, the situation in the EU’s Eastern and Southern Neighbourhood, and the future of the Weimar Triangle. According to Poland’s top diplomat, the European Union’s relations with Great Britain should remain close, as we share a similar view on many issues, and have common security and economic interests. “Poland is and will be in the EU, but we want the Union to be better. EU institutions are supposed to help citizens, not the other way round,” he emphasized.

Speaking about the future of the European Union, Minister Witold Waszczykowski pointed out that an EU of the future should be economically competitive and guided by solidarity. In Minister Waszczykowski’s opinion, the needs of sovereign nation states should be at the core of integration.

The anniversary meeting was an opportunity to sum up the Weimar Triangle’s activity so far, and reflect on the future of dialogue between Poland, Germany and France. Minister Waszczykowski said the Weimar Triangle should become a platform for cooperation and coordination between Poland, France and Germany with regard to the most significant challenges arising today within the European Union and NATO. “I want the Weimar Triangle to intensify its work, e.g. through meetings of the presidents, prime ministers, and experts,” said the chief of Polish diplomacy.

Moreover, the ministers adopted a Joint Statement on the Future of Europe, where they declared that Weimar Triangle cooperation would be enhanced. “Given the unprecedented challenges facing Europe, we see the need for intensifying cooperation, and giving it new momentum. It is in this context that we perceive the summit of the heads of state and government of our countries which is scheduled to take place this year,” reads the Statement.

As part of anniversary celebrations on Sunday, the ministers attended a meeting with young people, which included a presentation of “Europe 2013: We Can Make It,” a Polish, German and French youth camp.

On Monday, the ministers attended a conference of German ambassadors in Berlin. Minister Waszczykowski, in his speech given on this occasion stressed in his speech that the creation of the Weimar Triangle format played a role in helping Poland regain its standing within international politics. “Three countries that were strongly divided in recent history now sit at one table to discuss European issues,” he said.

“Today, we are once again divided, not as deeply as 25 years ago but the example of Brexit shows us that neglected cracks can lead to real rifts,” Minister Waszczykowski said.

Within this context, he pointed to the OSCE, which in his opinion has stopped being a credible component of Europe’s security infrastructure. The minister said that the foundations of the Organisation for Security and Co-operation in Europe was based on the principle of respect of borders and territorial integrity and the renunciation of war as a political instrument. Waszczykowski stressed that Warsaw and Berlin must take on the challenge of restoring faith in these principles within Europe.

“In 2014, war and territorial aggression returned to European politics on such a scale for the first time since 1945,” Poland’s chief diplomat said.

Referring to the July NATO Summit in Warsaw, he said: “The decision to create an on-going rotational presence of Allied forces on the territory of Poland and the Baltic States shows that NATO is not just a good-weather alliance”.

He stressed, however, that is important that the Summit’s decisions are implemented effectively. “Helping implement the decisions made at the NATO Summit in Warsaw will be a test of solidarity, in particular for European allies. It will show that credibility in the defence of principles requires credibility in defence policy,” Waszczykowski said.

According to Poland’s head of diplomacy, co-operation between Poland and German can benefit Europe. He said that this co-operation should also take place within the European Union and shared responsibility requires a sober approach to migration policy.

“For many years now, Poland has protected the EU’s eastern border in a responsible manner,” he said.

“Despite several migration waves from the Caucasus and constant pressure caused by migration from Ukraine, we never turned to Brussels for additional help with this matter, we respected the allocation of powers.  In 2015 we learned that different rules would be applied in relation to certain parts of the EU border. We were surprised to learn that there are double standards within European migration policy,” Minister Waszczykowski said.

According to the head of Poland’s MFA, with regards to the migration crisis the European Commission took “a series of rushed, irresponsible and hasty steps,” which “not only do not solve the migration problem but actually create new problems within the area of internal security”.

“The key to solving the migration crisis lies not in Europe but in the Middle East, in Asia and Africa,” he said. The Polish foreign minister said that the European Union’s common foreign and security policy efforts as well as its humanitarian and develop strategies should be much more effective. “Responsibility also requires us to maintain a tough migration policy through the tight protection of our external borders,” he stressed.