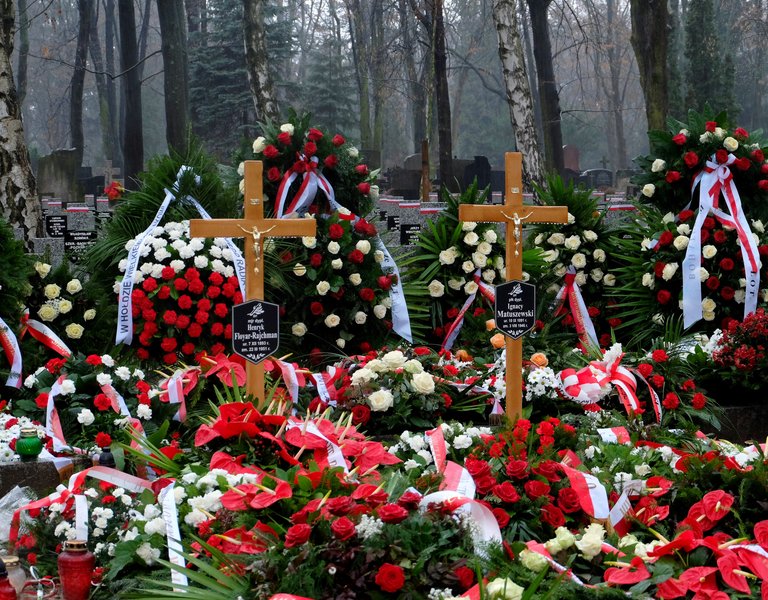 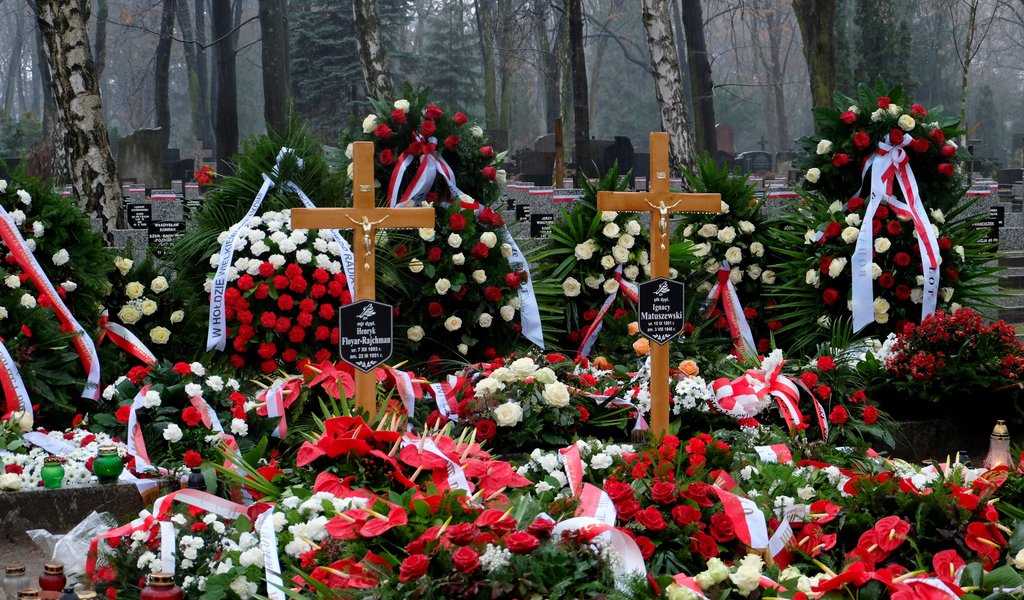 Colonel Ignacy Matuszewski and Major Henryk Floyar-Rajchman will return posthumously to a free Poland, in accordance with their wishes. They will be interred at the Powązki Military Cemetery, next to their brothers in arms from the 1920 war against the Bolsheviks.

Colonel Ignacy Matuszewski and Major Henryk Floyar-Rajchman will return posthumously to a free Poland, in accordance with their wishes. They will be interred at the Powązki Military Cemetery, next to their brothers in arms from the 1920 war against the Bolsheviks.

When Colonel Ignacy Matuszewski died suddenly on 3 August 1946 in New York, his friend Bohdan Podoski said that “once the Polish army is formed, and formed it inevitably must be”, it will “lower its banners in reverence over the tomb of Józef Piłsudski, a soldier of freedom, whose heart broke when that army vanished.”

Five years later, when Major Henryk Floyar-Rajchman died, also in exile in New York, having managed to leave instructions stating that he wanted to be buried in a joint grave with his friend, the émigré poet Antoni Wójcicki wrote that “free Poland shall never forget their achievements”, adding that years in years to come, they “would become a shining beacon of faithful service to the cause”, and “people shall erect monuments to them in Warsaw”, “inscribing in granite with fists so hard: ‘For Poland’s freedom – they gave their lives!’". Today, both prophecies are coming true! The Polish Army welcomes its officers, lowering its banners in reverence over their joint grave.

Formally, everything began on 29 June 2016 in the Traditions Hall at Warsaw Garrison Command, on Józef Piłsudski Square in Warsaw. This was when Minister Antoni Macierewicz announced the forming of the Honorary Committee for the purpose of transferring the remains of Colonel Ignacy Matuszewski and Major Henryk Floyar-Rajchman to Poland, and their ceremonial burial at the Powązki Military Cemetery.

The procedure was considerably complex, requiring hearings at a state court in New York. Several weeks ago, the court consented to the exhumation and transfer of the remains to Poland.

There is no point in concealing the fact that it was my idea to bring both Polish Army officers back home. I had actually been considering the idea for years, especially in light of the instructions left by Matuszewski and Rajchman; they wanted to be laid to rest in their beloved Warsaw, in free Poland. I had made a similar attempt in 2006 – yet my first conversation with the Minister of National Defence at the time made me realise that I didn’t stand a chance.

Having discovered both characters in the mid-1990s, Matuszewski’s political thought in particular, I wrote a few bitter words on the Cracovian Arcana website, to the effect that “the independent Republic of Poland had not stood up for Matuszewski and Rajchman”, and that “forgotten, in the still of New York heat, they are still dreaming their dream of a great, powerful, free, happy, and lawful Poland, capable of bringing law, peace and justice to her own lands and to the endless stretches of all Eastern Europe".

Fortunately today, these words have become partly outdated. Transferring the remains of both officers simultaneously is something of a coincidence: on his death bed in March 1951, Floyar-Rajchman expressed his wish to be buried in the tomb of his friend, Colonel Matuszewski. They will be brought home together, to be interred at the Powązki Military Cemetery, in the 1920 Heroes Quarter – both officers fought in the war against the Bolsheviks.

Matuszewski and Rajchman are officers with unquestioned accomplishments to their name, documented by historians for years in a variety of contexts: strictly military, political and economic. Fate brought them together in 1939, when they were both responsible for evacuating our national assets from a state overrun by Germans and Soviets to France, a country safe at the time. Rajchman was at the helm of a convoy carrying National Defence Fund property – Matuszewski evacuated gold owned by the National Bank of Poland, saving 80 tonnes of Poland’s gold reserves from the occupying forces!

Thereafter, they were united in their wanderings: across Spain and Portugal, they arrived in New York, where they fought for Poland’s right to an independent existence. In 1942, they worked together to form the National Committee of Americans of Polish Descent – the prototype of the Polish American Congress. 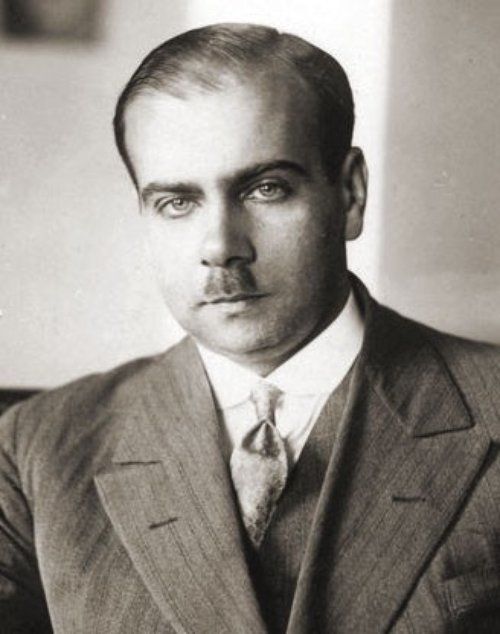 Yet Matuszewski plays first fiddle in the duet; notably, Rajchman never made an attempt to conceal that his vocation comprised service to “dear Ignaś”. A sober perception of Polish matters, organisational talent, and extraordinary insights made Matuszewski one of the greatest – and least-appreciated – Polish politicians of the 20th century. A colonel in the Polish army; he was also commander of the 11th Division; a diplomat; treasury minister; co-founder of the National Committee of Americans of Polish Descent and the New York-based Józef Piłsudski Institute; last but not least, he was a remarkably talented publicist and polemist.

One of the Commander’s [Piłsudski’s] closest circle, he found himself in opposition to the government upon the Marshal’s death. It does seem that his greatness was only recognised in the later years of his life – when, during World War Two, he shouldered the burden of countering Władysław Sikorski’s politics and the pro-Soviet discourse of the Anglo-Saxons, stepping on the toes of well-nigh everyone he encountered. It is not by chance that we read in the posthumous pro memoria: “Matuszewski appealed for resistance against anyone depreciating the Polish cause, adversaries, allies, and our own alike.”

Matuszewski’s resistance and stalwart qualities bore fruit: in the wake of May 1943, i.e. when the mass graves of Katyń were discovered and Matuszewski began his related media campaign, the Americans had him classified as a foreign agent, submitting him to preventive censorship and FBI surveillance; they even exchanged information on Matuszewski with Moscow.

In all probability, Matuszewski was the only publicist subject to such strict US rules and provisions. Despite being a Pole supporting all allied action against the Germans, he was subjected to treatment identical to that extended to the American-Japanese or American Germans – the only difference was that he did not end up in isolation camp.

In March 1943, Matuszewski ceased writing press articles for a while in hope that the American authorities would apply registration provisions to others as well, thus opening up the field for broader protest. How wrong he was – he remained the only foreign agent publicist in the United States!

His bitter disappointment with the American stance notwithstanding, Matuszewski took satisfaction in having been penalised for his independence and anti-Soviet attitude. His satisfaction rose as international developments began confirming all his earlier arguments. Yet satisfaction was shaky – Matuszewski began to realise that Poland would emerge from the war neither whole nor independent. He began to notice that increasingly less could actually be done. His amazingly piercing mind allowed him to make an astonishingly accurate prediction of wartime developments, bringing Poland into servitude. To add insult to injury, on 21 December 1944 the Department of Justice withdrew Matuszewski’s permanent residence application. Yet he still refused to surrender.

In April 1945, he was still a National Committee of Americans of Polish Descent delegate to the conference of 46 states in San Francisco. It was there that he joined forces with Floyar-Rajchman and filed a demand (via the American delegation) that Molotov provide explanations concerning the kidnapping of sixteen underground government members. In memorials addressed to President Truman, he protested against the Yalta agreements, which contradicted the Atlantic Charter’s provisions. Nonetheless, the United States had at the time no further intention of paying heed to the voice of free Poland, and only deigned to remember Poland during the subsequent presidential campaign…

In his final article, Matuszewski summarised the policy of the allies as follows: “The governments of England and of the United States began destroying the principal values of Western Culture in Europe – the rule of law [...].The British and American governments are signatories to the partitioning of Poland".

Colonel Ignacy Matuszewski died suddenly of a heart attack on 3 August 1946, upon returning from medical treatment in the Adirondack mountains. After a Catholic ceremony on 7 August 1946, his body was interred at the Calvary cemetery in Queens, New York. Speaking at his graveside, poet Kazimierz Wierzyński declared, “We have lost a man, but we shall not lose his ideas. A human life has passed – the human accomplishments shall not.”

Władysław Studnicki added, “Throughout all the disasters our nation has suffered, a single figure stands out on the Polish political horizon – that of Ignacy Matuszewski. Prime ministers and members of the Polish government abroad unwittingly became implements of a foreign policy and of the policy of the state they received funding from. Matuszewski chose the right way: neither he nor the organisation he created ever become tools of a foreign power – bur rather a body striving to make it follow a policy consistent with the Polish raison d’état ".

On 22 March 1951, he was yet again joined by his most faithful friend, a soldier of the 1st Brigade of the Polish Legions and a pre-war minister of trade – Major Henryk Floyar-Rajchman, laid to rest together in a joint grave. This is why – to honour their wishes – they are both coming home, to be interred among their brothers in arms from the 1920 war against the Bolsheviks, at the Powązki Military Cemetery.