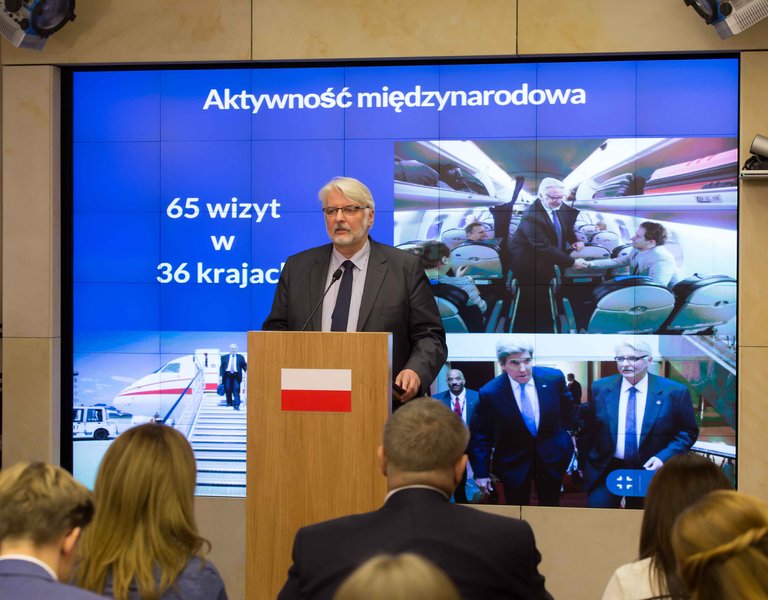 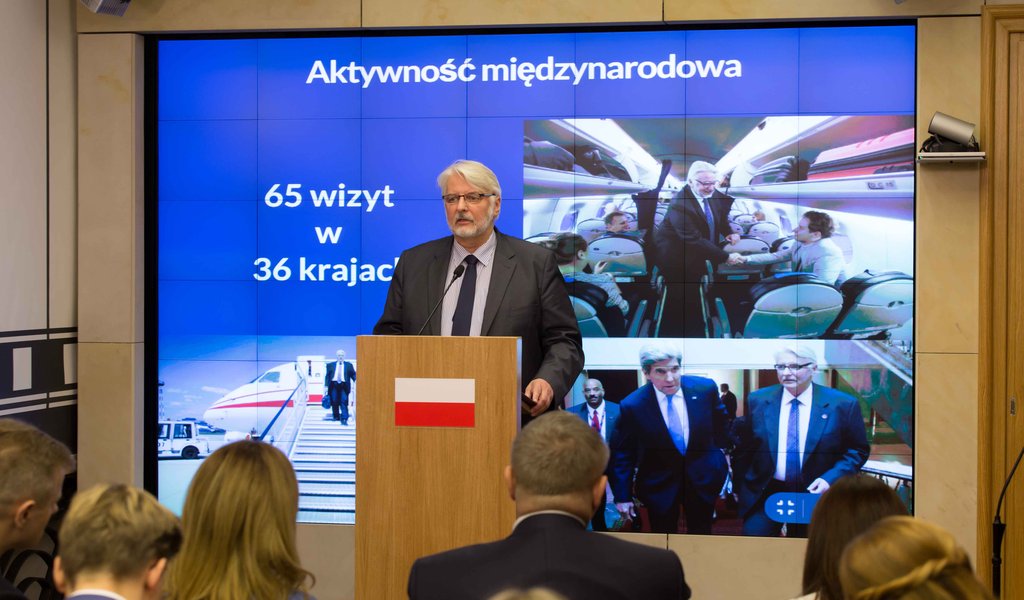 Minister Waszczykowski sums up past year in Polish foreign policy

“Our activities throughout the past year have focused on the key areas that we discussed with Madam Prime Minister in our policy addresses to the Sejm: Poland’s security, growth and empowerment at international institutions that we are part of,” Minister Witold Waszczykowski said at a press conference that marked one year of Polish foreign policy of the Prime Minister Beata Szydło government.

The chief of Polish diplomacy took stock of the most important activities taken by the Ministry in respective fields of international cooperation and towards individual countries. 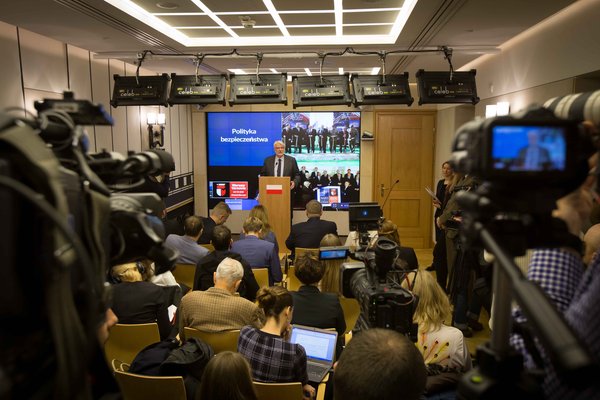 Security as a priority

“National security has been a priority for this past year and it will continue to be such because security is something that can never be taken for granted,” stressed the minister in his opening remarks. The US and the UK are Poland’s key partners in this area. “Our aim has been to reach an equal security status within the Alliance. So far there have been two kinds of security status, with the better one, guaranteed by Treaty provisions and the permanent presence of troops, enjoyed by Western Europe,” explained the Polish foreign policy chief. “According to decisions taken at the NATO summit in Warsaw, NATO troops will be stationed in the territory of Poland and other eastern flank countries, so our security status will be equal to that of Western Europe,” he underscored.

“We are not only a consumer of security; through our defence spending we conduct a credible and stable policy in this field,” stressed the minister, also recalling Polish contributions to battalion groups and to operations in the Mediterranean. He went on to declare Poland’s readiness to return to UN peacekeeping missions.

Speaking about closer relations with the United States, the minister recalled with satisfaction that the US has decided to return to the missile defence project. The chief of Polish diplomacy said that ever since taking office, he has had three meetings with US Secretary of State John Kerry. He also noted that the Polish government has held many rounds of political and military consultations with the United Kingdom over the past year. “We have set up new cooperation formats such as Quadriga, or regular consultations between foreign and defence ministers,” he explained.

In the minister’s view, the region that is closest to Poland has become a recognizable brand in NATO and the European Union. “We have reinvigorated the Visegrad Group, and now we are holding its presidency. As part of the group, we hold consultations ahead of every major EU and NATO meeting. We meet in different formats with Ukraine, other European countries, the Baltic states and the Western Balkan countries,” he said. “This cooperation aims to create a strong Central and Eastern European lobby within the EU and NATO, a lobby that will be able to influence decisions of these institutions. We don’t want this part of Europe to be a periphery or transit belt. We want it to be an evenly developed region that in time will become equal to Western Europe,” explained the minister.

As the minister stressed, Germany is Poland’s very important partner in Europe. “This year has marked 25 years of the Treaty on Good Neighbourhood. We have had a number of visits, from top-level officials to sectoral ministers,” he said. “I can hardly count the number of times I’ve had meetings with my counterpart Frank-Walter Steinmeier. We would meet practically every month. We’ve run out of blank pages in the calendar of our meetings,” he said.

“The Polish community in Germany plays an important part in our cooperation. At yesterday’s meeting with Poles and my deputy, Minister Steinmeier said that Germany will try to take Polish language education in Germany to a higher level. It’s been our longstanding objective,” he added. The minister also said that both countries will carry out the project of a joint Polish-German school in Lebanon, and recalled that trade between Poland and Germany is worth close on 100 billion euros.

The minister highlighted the economic aspect also when talking about Poland’s relations with France. “Polish-French relations are very extensive, and amount to billions and billions of euros,” he said, referring to French investment in Poland. “France is our major partner in political, economic, and security policy cooperation. Let me remind you that it was to Paris that Madam Prime Minister paid her first foreign visit,” he added.

As the chief of Polish diplomacy observed, despite its declarations of Brexit Great Britain remains Poland’s important partner in Europe. “Our first-ever intergovernmental consultations will take place in London on 28 November,” he underscored.

In the minister’s words, Poland is active in European discussions on energy and agricultural policies, Brexit, and the migrant crisis. “We have endorsed peace initiatives, we are an active member of the anti-Islamic State coalition, we are members of numerous European funds that support Turkey and the refugees in Jordan and Lebanon. In the framework of Visegrad cooperation we have come up with the concept of flexible solidarity to replace compulsory relocation of refugees. It is drawing more and more support in Europe,” he said. 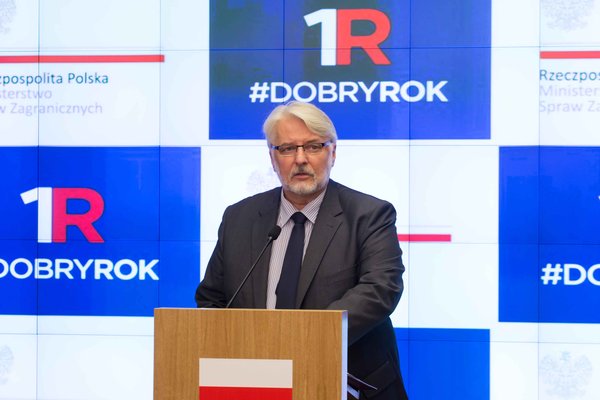 “We have a reasonable Eastern policy. We need to be reasonable and cautious, because we deal with a partner who aims at a complete overhaul of the strength balance and security architecture in Europe; who does not want to cooperate either with the European Union or with NATO. Despite the fact that both of these institutions come forward with proposals of privileged relations with Moscow, Russia rejects this dialogue,” – underlined the minister. “Despite all odds we cooperate with Russia. We are satisfied with President Putin’s recent declaration. When hosting the Polish ambassador, he declared his willingness to do anything it takes to improve Polish-Russian relations. We are less ambitious,” said the minister. “We answered that he does not have to do anything it takes. A few gestures would be enough, for example giving us back the Tupolev wreckage, cooperating in the Smolensk crash investigation, or lifting the embargo on Polish goods.”

The chief of the foreign ministry stressed that Poland continues to support the sovereignty, independence and territorial integrity of Ukraine and that we re-opened cooperation with Belarus. “I am moderately optimistic on this one. Some agreements have already been made on education, which will have a positive impact on the status of Poles living there,” he added. The minister said that Poland is also seeking to revitalize the Eastern Partnership.

“We are also opening up to other continents,” said the minister, referring to Far East countries. “Our relations with China are extremely promising. Only this year we have had high-level contacts, we had China’s president visit Poland. Other important Asian partners are the Republic of South Korea and Japan,” he added, recalling among others the launch of flight services with these countries or numerous trade agreements.

Contacts with the Polish community abroad

According to the minister, relations with the Polish diaspora constitute an important element of international cooperation. “Millions of Poles live abroad. Over the recent years these numbers have increased further by migration to Great Britain, Germany and other countries,” he said.

“We act to make it possible for the Polish community and Polish children abroad to learn Polish. We have been successful on this count in Ukraine, Latvia, Lithuania, Germany and Great Britain.” The amended law on the Pole’s Card and evacuating a group of Poles from Ukrainian Mariupol were mentioned as another success. The minister also said that the status of Polish community after Brexit recurs on the agenda in our talks with Great Britain.

“We have high expectations regarding cooperation with the US. We expect it to remain, euphemistically speaking, a European superpower,” said the minister. “We count on them to implement the decisions taken at the NATO summit. We have been informed that some troops and equipment are already packing up to be deployed in the eastern flank in early 2017,” he added. He went on to say that the Polish government will “take President Trump at his word that he would waive visas for Poles.” The head of the MFA recalled the July visit to Poland by President Obama. “Yesterday, the president-elect called President Andrzej Duda and had a long conversation with him,” he added. 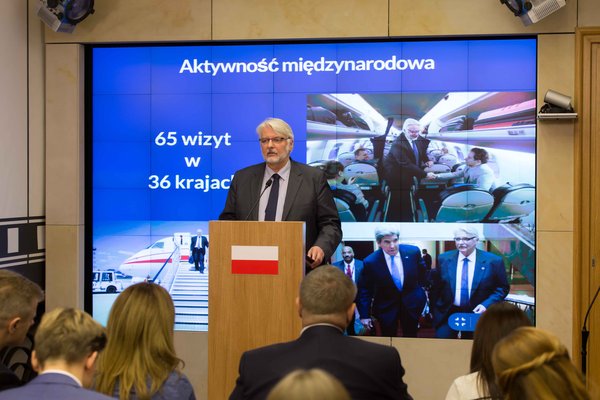 “This year I have made 65 visits abroad, and by the end of the year there will be 73 of them,” the minister stressed. He mentioned, among others, his participation in the EU and Latin America summit in the Dominican Republic, during which he met with 14 ministers from the countries of the region. He recalled his presence at numerous international conferences, including in Davos, the security conference in Munich, the Brussels Forum, GlobSec in Bratislava, and the Economic Forum in Krynica. “In a few days I am visiting Dublin, where I will also present issues of Polish foreign policy,” he added.

New diplomatic posts and activities of the ministry

“Poland maintains relations with 195 countries. We carry out our tasks via 98 embassies, 36 consulates and 24 Polish institutes. Our diplomatic service employs around 4,000 people,” said Minister Waszczykowski. He noted that whereas during 8 years under the previous coalition, nearly 30 posts were closed, since last year this network is being rebuilt. This year, Polish diplomats have returned to Senegal and Iraq. “We have earmarked funds to re-establish the embassies in Tanzania and Panama next year, and perhaps we will also be able to open an embassy in Manila in the Philippines,” he said. The minister added that the network of consulates in the United States, Ireland and the UK is to be expanded. “We are also thinking about creating a call centre available 24 hours a day. According to the minister, for now “it would be a pilot programme for the UK.” The centre would make it possible to quickly report problems and receive information on consular matters.

The foreign minister also mentioned the creation of the Diplomatic Academy, whose aim is to provide additional training for diplomats working for the ministry, and to recruit and train new diplomats. “This year we want to admit over 30 people, that is twice as many as in previous years, for the diplomatic and consular training programme,” he added.