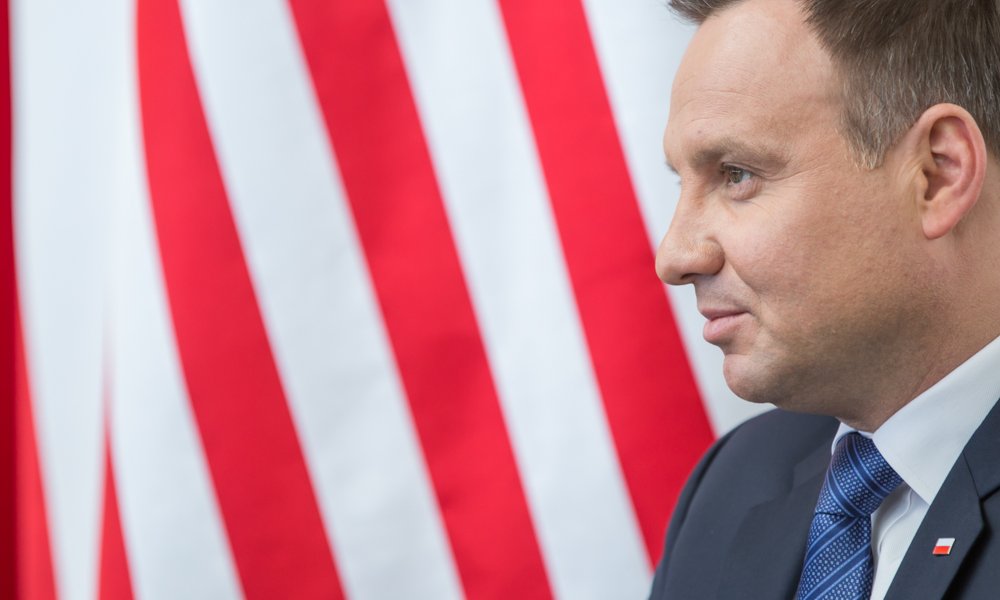 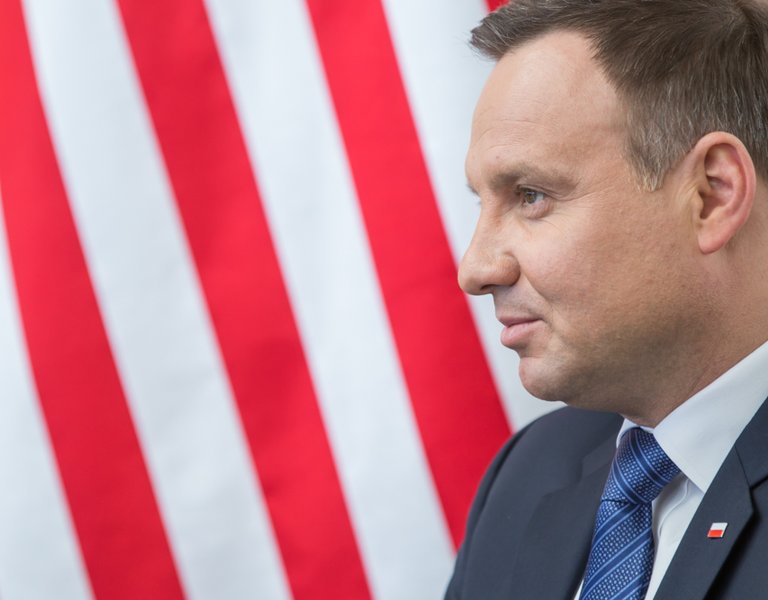 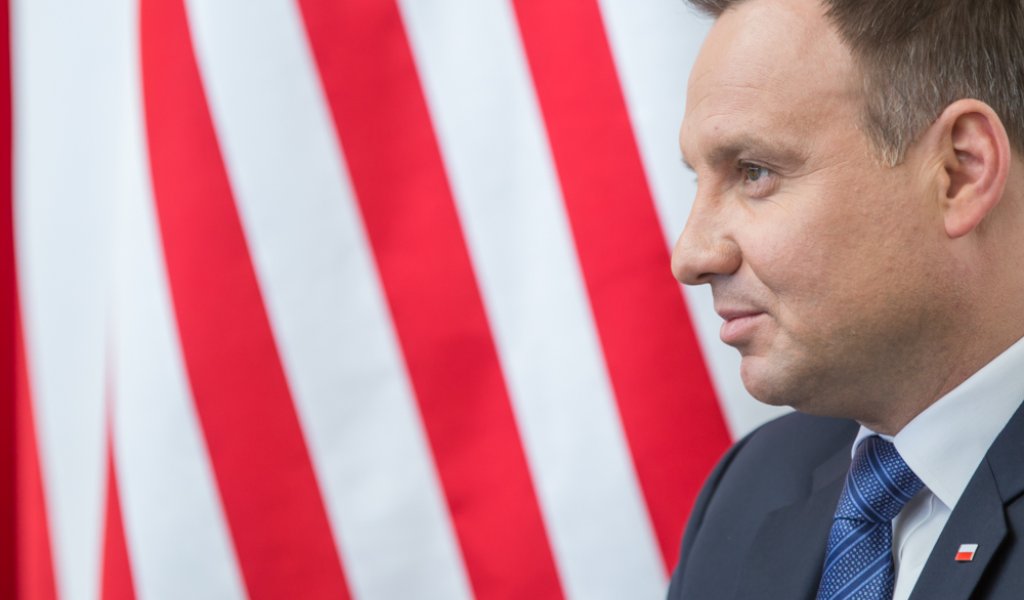 New defence infrastructure for the East

Poland wants to be a strong ally to the United States but it expects a greater American military presence in our part of Europe, was President Andrzej Duda's main message during his visit to Washington.

During a debate consisting of several hundred representatives of Washington's most important think-tanks, diplomats and journalists, President Duda presented the key facets of Poland's political strategy and made reference to the current controversies connected to Poland. 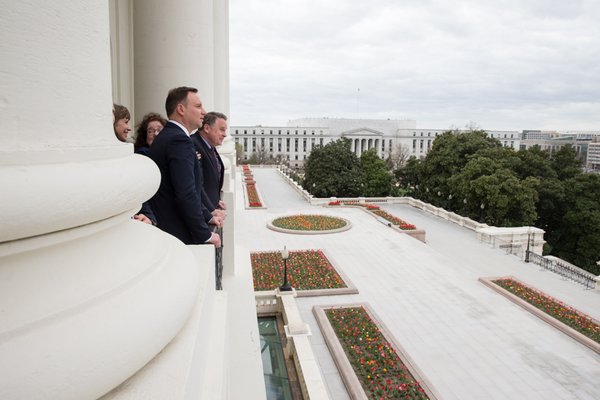 On Wednesday, the first day of his visit to the United States, the President confirmed Washingon's plans to deploy a U.S. Army armoured brigade to Eastern Europe.

"The Americans announced today that an American military brigade, an armoured brigade equipped with the most modern equipment, will be deployed to Central-Eastern Europe," he said, pointing out that he does not rule out the presence of additional U.S. defence infrastructure in Poland, which is something that Poland has been and continues to insist on.

The President said that it would take several months for the armoured brigade to be deployed in Central Eastern Europe. The Associated Press news agency has reported that the brigade would consist of 4,500 soldiers, several hundred vehicles including over 50 heavy armoured tanks as well as many other military vehicles and artillery units. This will require a change of existing plans regarding a relocation of American forces currently based in Europe. It has been decided that some of the military equipment stationed in Western Europe will be brought back to the United States and updated while new equipment will be delivered to Poland, the Baltic States and Romania. The first rotation is due to last 9 months.

Asked whether American commitments correspond to Poland's expectations for a permanent NATO presence in Poland, the President said that instead of focusing on further adjectives to describe the presence, it is most important to him that the presence becomes a "fact."

"All the time there are questions about permanent bases, permanent presence. For me the most important thing is the security of Poland, and I want the presence of NATO Alliance forces, in particular those of the U.S., in our region to become a fact. Whether this will be on a rotational basis or will happen in some other form, is secondary. The most important thing is that they're there," the President said.

Speaking at the National Press Club, Duda said he is in favour of the West demanding that Russia withdraws from the Crimea.

Although Poland wants good relations with all of its neighbours and does not seek to escalate tensions ("a new Cold War"), it does believe that anti-Russian sanctions should be kept in place until it observes international law.

In reference to the migration crisis, the President assured that Poland will not refuse assistance to anyone seeking shelter from war, however Poland does not agree with the forced relocation of refugees in Europe. He said that the EU's migration policy is contradictory and unsound, as "on one hand they want to be humane and help refugees but on the other hand they want to support their forced relocation." Instead, Europe should focus on ending the war in Syria, which is the main cause of the refugee crisis. 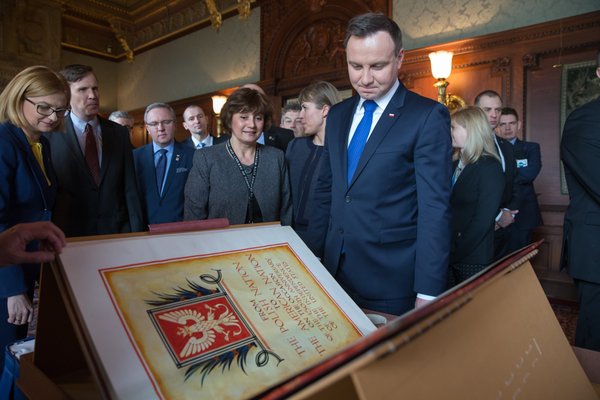 Asked about the controversy surrounding Poland's Constitutional Tribunal, which is getting a lot attention in the American press, the President explained that the problem emerged when the PO-PSL coalition "'made a last minute nomination of five new judges". This triggered the whole conflict. The situation is a result of the move on the Constitutional Tribunal, which was not accepted by the opposition at the time, which is now in government, the President said. He said that the current parliamentary majority wants to make the process more, not less, democratic. He added that Poland is considering makes changes to the Constitution, in order to depoliticize it. President Duda pointed out that the United States also has a conflict regarding the nomination of a judge to the Supreme Court. The Republican majority in Congress does  not want to approve the nomination of a judge chosen by Obama as it believes that the nomination should be made by his successor.

On Wednesday the President met with representatives of the Polish community. He thanked Poles living in the United States, especially those who are helping to fight harmful historical stereotypes, including those that accuse Poles of anti-Semitism and their participation in the Holocaust. He reminded of the event held recently in Markowo, where a museum was opened honouring Poles who helped rescue Jews during the Second World War. He also expressed his gratitude for their assistance in setting American public opinion straight regarding the current political situation in Poland.