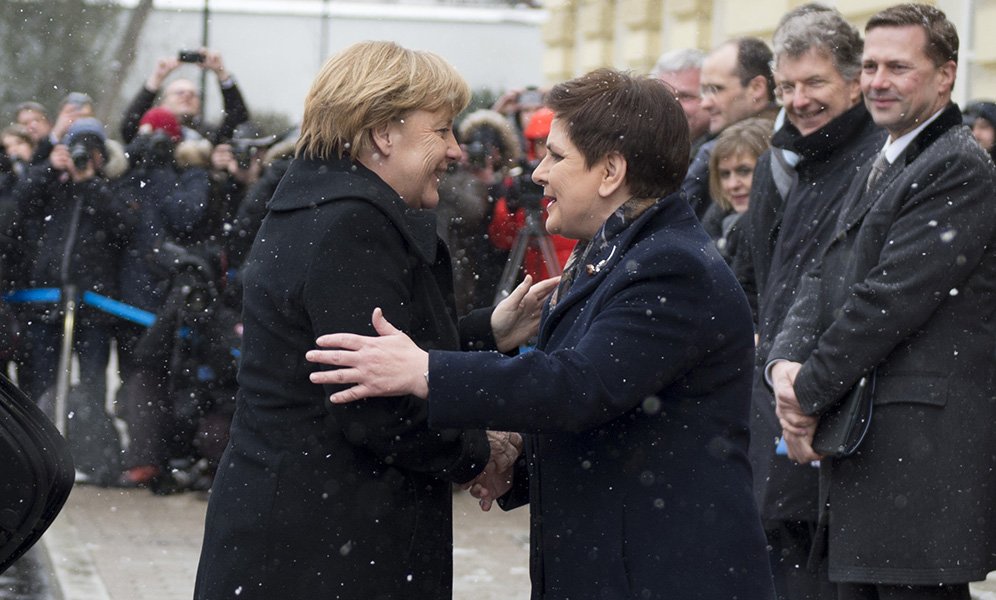 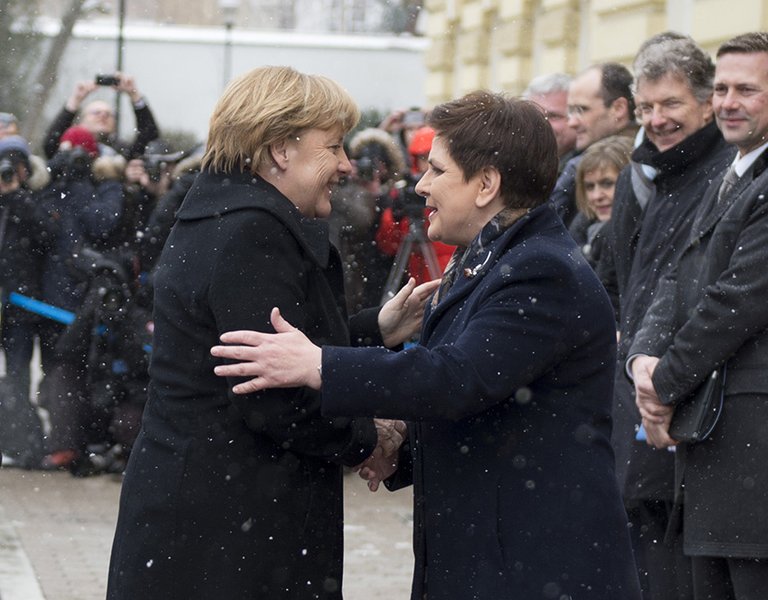 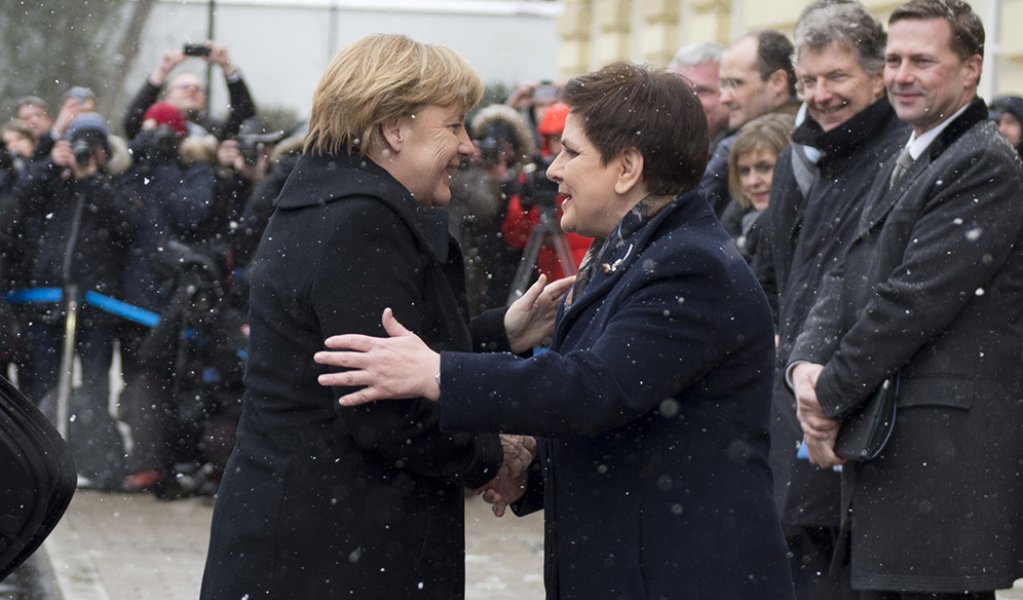 The recent visit of Chancellor Angela Merkel to Warsaw, as well as the disclosure of the informal, unannounced Kaczyński-Merkel “summit meeting” in the summer last year may create a new quality of relations between Berlin and Warsaw. It may but doesn’t have to. It is therefore all the more so worth attempting to show what may join us as well as what may divide us and ultimately what in no wise can be reduced to a “common denominator”.

We share relative internal stability. Compared to the other countries of the “big six”, our states look to be in great shape. To sharpen our focus: Great Britain – Brexit; France – possible Frexit, i.e. Paris’ withdrawal from the EU and NATO, as predicted by a candidate enjoying the support of more than a third of the French people; Italy – the collapse of the government, the likelihood of snap elections and the promise of the Five Star Movement, the front-runner of political-support surveys, that Italy will leave the Euro zone; and Spain – two elections in 2016, the resultant minority government, a difficult economic situation and separatist tendencies, especially strong in Catalonia; finally, a difficult economic and social situation in that kingdom. Berlin and Warsaw appear to be oases of stability which will naturally compete in some areas – that is normal among larger states – but in other fields, including the European dimension, should cooperate in their mutual best interests.

The thing that should be common to both the EU’s leader, Germany, and the leader of the “new Union” (states that entered the EU after 2004), Poland, is the rescue of the “European project”. European communities have countless defects, but in the geopolitical sense that would be very good for Russia and very bad for Russia’s neighbours including Poland.

The point is not for Sarmatians and Teutons to march side by side chanting “Union, Union!” Because, to travesty the bard, God may appear form behind the burning bush and ask: “What kind of Union?” Exactly, what kind of European Union is at stake? If Berlin keeps taking quantum leaps and promoting a two-speed Europe, it will certainly do so without Warsaw, because such social-engineering games do not interest us. That can only push us onto a slippery slope. That is no prescription for saving Europe but rather for driving it to ruination.

It would be better to discuss concrete solutions. We hear Germany opposes a change of treaty, whilst Poland is pressing for one. That is the wrong approach to the matter. Perhaps Berlin wants minimalistic change in order not to change anything at all, and we want not so much maximalist but realistic change that would be far-reaching and provide hope of overcoming the Euro-impasse. The point is that many of those participating in the media debate on the subject do not realise that. Because of formal and legal considerations, a change of the European treaty is necessary. It must take place in connection with Brexit. Whenever any country joins the EU there arises the automatic need to change the treaty which is concluded with all European Union members. And that works both ways. When any state leaves the Union, a treaty change is also necessary. That did not occur in Greenland’s case, because that huge territory which decided to tell the EU adieu is not a separate state but only part of the Kingdom of Denmark. But that will certainly take place in regard to the United Kingdom of Great Britain and Northern Ireland, and it must occur within two years’ time.

EU without the “new Union” or two-speed Europe

The question is therefore not whether to change the treaty but how to change it. In other words, what shape should our common Europe take after a change of the treaty and which mechanisms and ground rules should be changed and what new ones should be introduced. Also, in which direction should we move? That is the subject of very concrete Polish-German talks as well as those conducted in the broad European family of 28 minus one.

Known for its pragmatism, Germany is less offensive than France when it comes to promoting federalist solutions and creating a “super state”. France appears to be trying to cover up its numerous internal weaknesses with a classic escape forward and with clear-cut threats: “we will find a different integration formula without you” (meaning without Poland and the “new Union”?), as France’s ambassador to the EU put it recently. It turns out that there is no one official German position on this issue. Either for tactical reasons or because of a true difference of opinion, a clear division exists between the CDU and SPD. Participation in the government of Frau Kanzlerin has not eradicated those differences. Worth noting is the far-reaching, bombastic formulation used soon after Brexit occurred by then foreign minister and future president of the Federal Republic of Germany, Frank-Walter Steinmeier. He openly spoke about going further in the direction of a federal Europe and also a “Carolingian Europe”, i.e. a narrow Union based on the affluent “old Union”, even that form before the enlargements of 1970, 1980 and 1990. That was when the chief of the Chancellor’s Office responded, which was seen as an indication of Angela Merkel distancing herself from those unrealistic plans. That is one of the reasons why it is better to have a German government partner in the CDU/CSU than on the left.

Can work on a national European treaty be the international basis for cooperation amongst states? Yes and no. No, because, although Warsaw ever since Brexit became a fact has declared such a readiness and need through the words of Jarosław Kaczyński, Germany both publicly and unofficially has indicated its reluctance to change, because in their view that may well open Pandora’s box. Yes, because for formal and legal considerations the European treaty must be changed anyway as a result of Great Britain’s withdrawal from the EU. And since it has to be changed, we must cooperate to ensure that its shape is satisfactory to the “old Union” and the “new Union” alike. Only then will the European Union continue to be attractive to all its members.

When in regard to the Polish demand, eagerly repeated in the capitals of our region’s states, we hear the clearly formulated thesis that the role of national parliaments should be increased, we also hear Germany’s loud silence. After all, we are demanding the very same thing the Federal Republic of Germany has already done! When it was still in the opposition, Law and Justice suggested transplanting German experiences in that area to our country. That country’s lower chamber of parliament, the Bundestag, which plays a key role compared to that of the Bundesrat (upper chamber), has clearly extended its prerogatives to accept (or not accept) all matters relating to European integration. Now it is MPs in Berlin who practically decide the tempo of Euro-integration, its scale and which concrete prerogatives should be transferred from Berlin to Brussels. It is the Bundestag that plays the role of a kind of “safety valve” in German-EU relations. But when Germany’s neighbour Poland wants to copy Berlin’s experiences on a European-wide scale, the German Federal authorities are not eager to Europeanise their political practice. At least for the time being. Is the point for only one European parliament to enjoy such supervisory competence?

But all that is after all up for discussion.

There is also a protocol of fundamental discrepancies,. They will not disappear even if the leaders of both states were to meet once a month. Together with many other countries we are protesting against the OPAL gas pipeline just as we had opposed Nordstream I and the now defunct Nordstream II.

I do not believe the Germans will suddenly change their position, although nothing can be ruled out in the long run. We will not turn a blind eye to the disgraceful practices of the Jugendamt (Youth Affairs Office) which boil down to taking Polish children from their parents. Perhaps we will achieve tangible progress in that area soon. And finally, we shall adamantly demand that the two million Poles living in the FRG get recognised as a national minority. We will keep reminding people that our compatriots had enjoyed such status not only in the Weimar Republic but also in the initial years of Hitler’s Third Reich (sic!).

It is no coincidence that our western neighbour regards only a few communities such as Lusatian Sorbs, Frisians and Danes as national minorities but denies such status to Poles (and not only them). That is linked to the exceptionally modest financial aid available to Poles who are German citizens. It is considerably less than the aid a relatively poor Polish state extends to the German minority in our country. We shall not forget that asymmetry and shall continue raising it whether Berlin likes it or not.

Poland and Germany should cooperate, but cooperation by the Polish side will not involve sudden amnesia regarding issues that were and remain of key significance for our international interests.