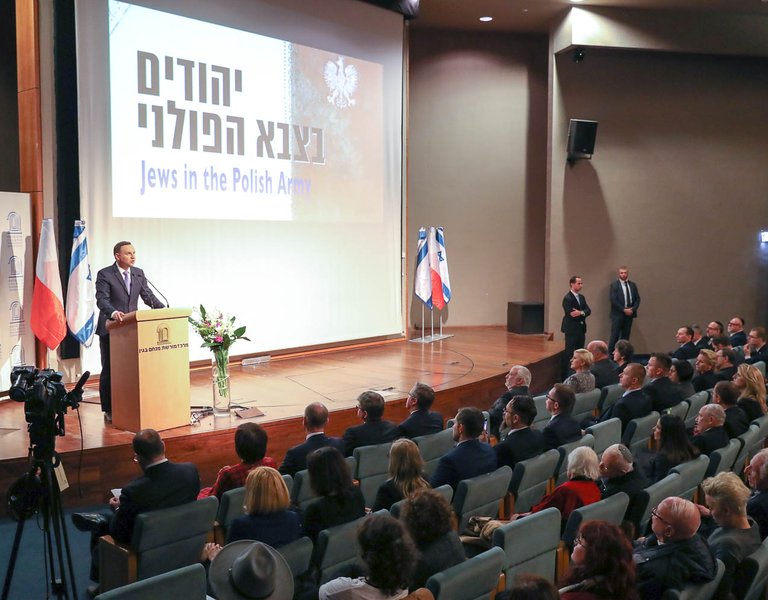 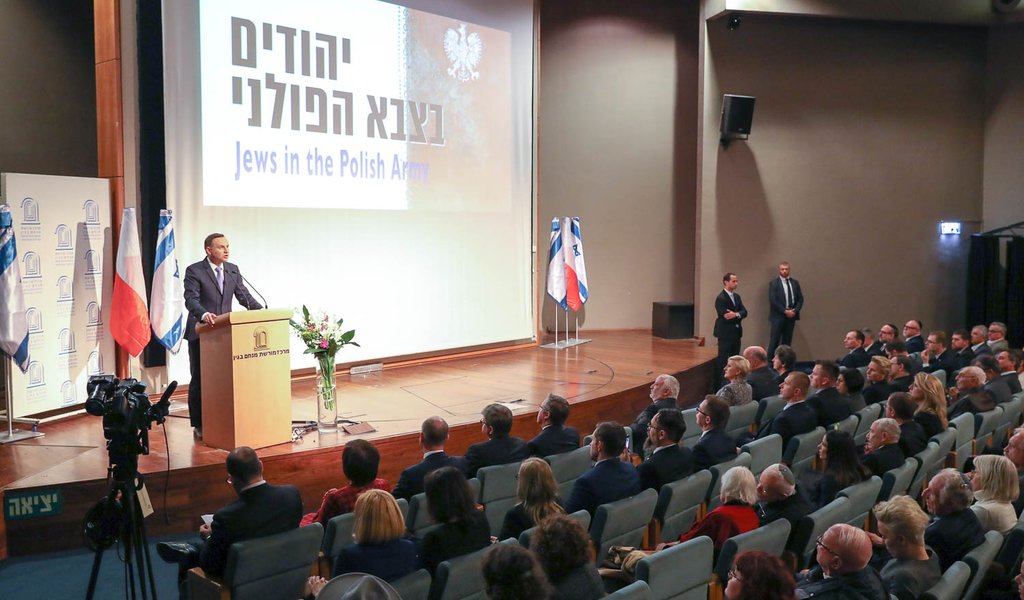 "Poles and Jews stood shoulder to shoulder in defence of Poland”

Poles and Jews share centuries-old heritage of coexistence in the Republic of Poland, where we jointly worked to secure the prosperity of our peoples, and in defence of which we frequently stood shoulder to shoulder, said President Andrzej Duda on Wednesday in the Menachem Begin Heritage Centre.

The Presidential couple visited the exhibition “Jews in the Polish Army" opened on the same day in the Centre based in Jerusalem.

- The exhibition inaugurated today reminds us of common historical experiences that bring  the Polish and Jewish nations together, and of the values ​​that underpin our friendship, such as freedom, security, tolerance, mutual respect, solidarity and friendship - said the President.

He pointed out that the patron of the Centre was born in Brest on the Bug River as Mieczyslaw Biegun; then in the rank of officer cadet of the Polish Army he came to Israel  in 1943 as one of Polish army soldiers under command of general Wladyslaw Anders.

- And here, on this soil,  at his own request he was dismissed from the service in order to be able to join the struggle for a Jewish state of Israel, whose member of Knesset he was for next ten terms in office, from 1949 to 198, that state that he ruled then for six years as prime minister - Andrzej Duda went on to say

A similar decision, likes that of Begin, was then taken by about 2.5 thousand Polish soldiers of Jewish origin. - Polish military commanders and political leaders of the government of the Republic in exile fully understood the reasons motivating Jews and did not hinder such choices - noted the President.

The President went on to say: Poles took leave of their Jewish colleague, former fellow prisoners exiled in Soviet labour camps and then brothers-in-arms from General Anders’ army wishing them success in the struggle to restore their own state. "

- They wished them success realizing that the same path led them to free Poland and to the creation of Israel: the path of armed struggle - said the President.

This way, a traditional Polish motto was embodied: "For our freedom and for yours". - The freedom that the Jews together with the Poles defended on many occasions in the past and for which they stood up in arms together as citizens of the Republic of Poland - noted the President.

Andrzej Duda stressed that for one thousand years, Poles and Jews lived together in one country, and Poland was for them "a welcoming land: Polin, where they found shelter, fleeing  persecution suffered in other countries of Europe."

- Most unfortunately, the Republic of friends, which for centuries we were shaping together  working for the common good, building nationwide the welfare of the country’s families, towns and villages, collapsed in the wake of aggression by Hitler's Third Reich in 1939 and in the wake of the Holocaust, which German Nazis brought to our soil - he said.

This way, the President observed, the occupiers murdered six million Polish citizens, including three million Polish Jews. – Such a planned destruction was an unimaginable crime. This tragedy changed the course of history and the destinies of our nations - he stressed. He pointed out that after World War II, "the Jewish people built their own state, while Poland re-emerged on the map of Europe within its new borders, enslaved by the communist regime, and after half a century regained sovereignty and true independence."

- We, Poles and Jews, we are the heirs of our long and rich Polish-Jewish common history. We have had unique experiences, equally and beautiful, and dramatic ones. We are jointly the heirs of the Republic of friends, which saw the birth of many prominent representatives of the Jewish people, including the founders and leaders of the State of Israel - he remarked.

He emphasized that "we are witnesses responsible for memory and truth, especially the truth about what happened in Poland, occupied by the Germans, during World War II."