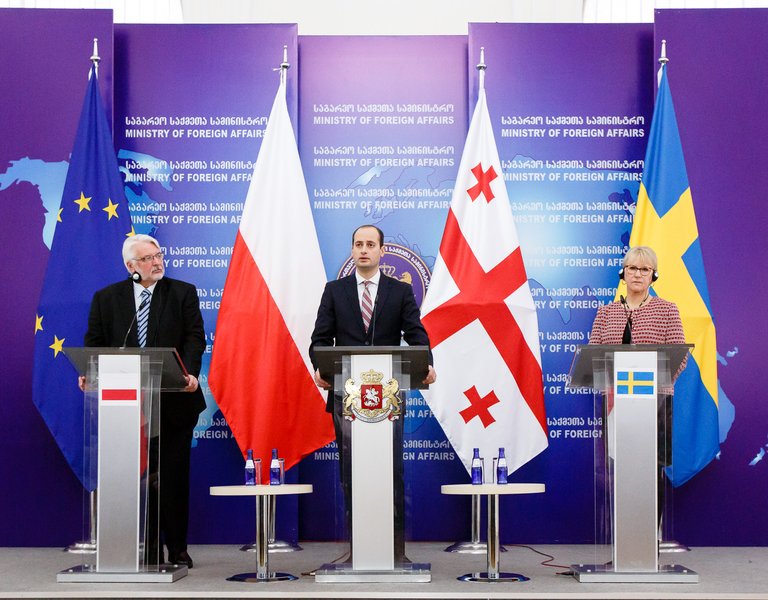 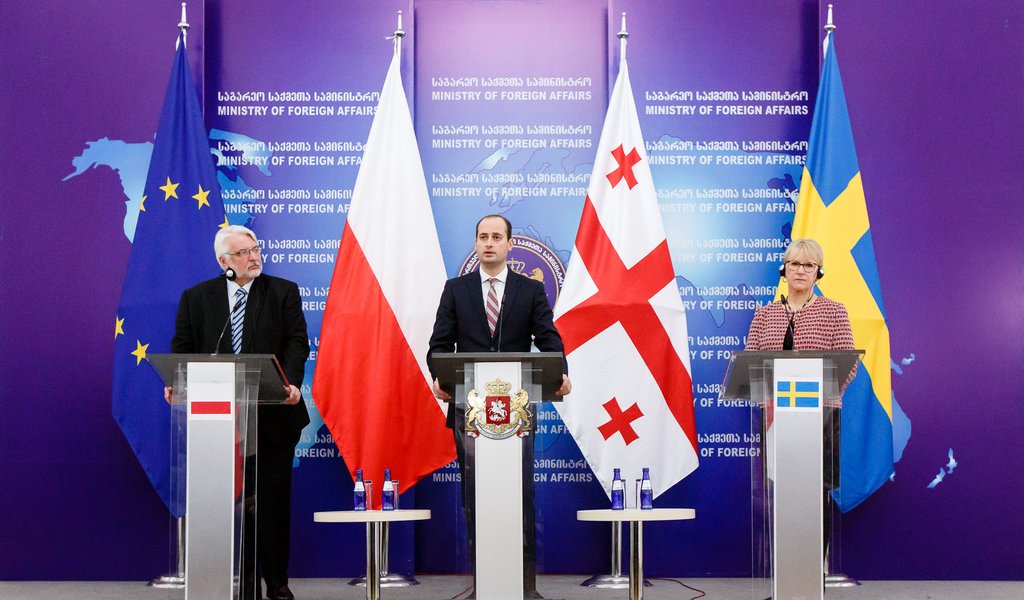 “Georgia is the most successful Eastern Partnership country when it comes to implementing the association agreement," said FM Waszczykowski at the joint press conference with Swedish and Georgian foreign ministers in Georgia

“As initiators of the Eastern Partnership, we recognize and support Georgia’s aspirations to EU membership,” emphasized the Polish foreign policy chief.

The Polish and Swedish foreign ministers have met with Georgia’s Deputy Prime Minister and Foreign Minister Mikheil Janelidze. The chief of Polish diplomacy said he was happy that a compromise draft of the Summit Declaration is practically agreed upon two weeks before the Eastern Partnership (EaP) summit in Brussels (24 November 2017), and that it will probably be adopted on that occasion. He emphasized that Poland and Sweden are aware that the results of negotiations are not perfect. Georgia and other countries which are more ambitious about their European path should expect a bolder language, regardless of internal discussions in the European Union. The interlocutors agreed that for all the importance of the political declaration, it is imperative that the signed agreements be implemented. “It is the best and most comprehensive process for bringing Georgia closer to the European Union,” said the chief of Polish diplomacy. “Reforms are also being carried out for the sake of citizens, to show them the positive side of adopting EU standards,” he added. At a joint press conference following the meeting, the three ministers appealed for recognizing “the European aspirations and choice of Georgia,” and for “respecting the country’s territorial integrity.”

The talks with Prime Minister Giorgi Kvirikashvili focused on the EaP’s future and Georgia’s role in the programme. As Minister Witold Waszczykowski stressed, given little chance of a swift accession of EaP countries to the EU, emphasis should be placed on sectoral cooperation to establish structural and lasting links between both sides. He pointed to connectivity, support for young people, and strategic communication as the most promising fields of collaboration for Poland. He highlighted the potential transport cooperation with Georgia, notably in the Belt and Road framework. “With an AA/DCFTA agreement with the EU, and a free trade agreement with China, Georgia is ideally placed to become a hub for EU and China investments,” said Poland’s top diplomat. “You are Georgia’s true friends. Thank you for supporting our country and the reform process. Georgia will not let you down,” stressed the Georgian prime minister.

The Polish and Swedish foreign ministers also met with members of Georgian civic organizations to discuss support for Georgia’s democratic transition and implementation of the EU association agreement. Next, Witold Waszczykowski and Margot Wallström stopped at the Mtskheta field office of the European Union Monitoring Mission (EUMM) to meet its Acting Head Erik Hoeeg, and Polish and Swedish members. The ministers were briefed on developments in the occupied territories of Abkhazia and South Ossetia, and travelled to the conflict demarcation line near Odzisi close to the border with South Ossetia.

The ministers concluded their visit by meeting Georgia’s President Giorgi Margvelashvili, with whom they discussed security cooperation. The Polish foreign minister declared support for Georgia’s sovereignty and territorial integrity. He also said that international efforts to bring the conflict in Abkhazia and South Ossetia to a peaceful resolution should be continued.

Organized on a Swedish-Polish initiative, the joint ministerial visit to Georgia was held a little under a month following Minister Witold Waszczykowski’s bilateral visit to the country (20 October 2017).

Ahead of their visit, the Polish and Swedish foreign ministers wrote a joint op-ed on the Eastern Partnership’s future, which appeared in Poland’s Dziennik Gazeta Prawna daily, on the English-language website EUObserver, and in Georgian press.