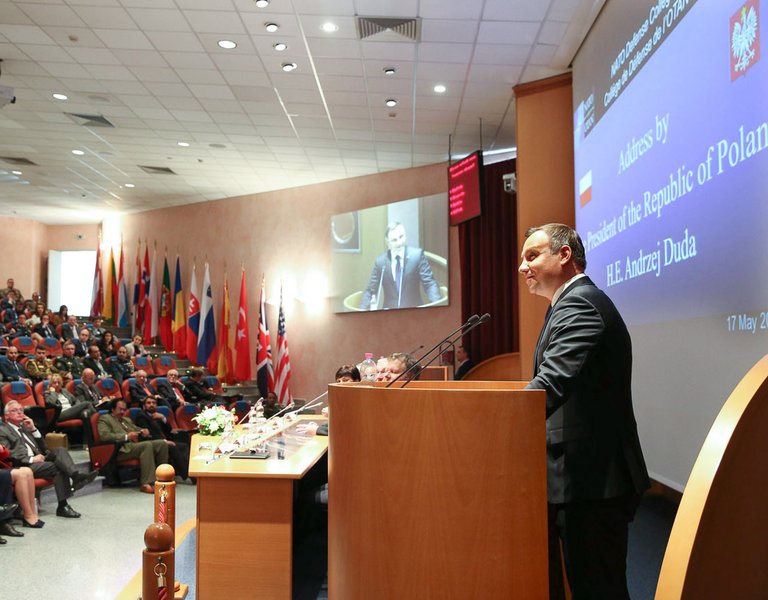 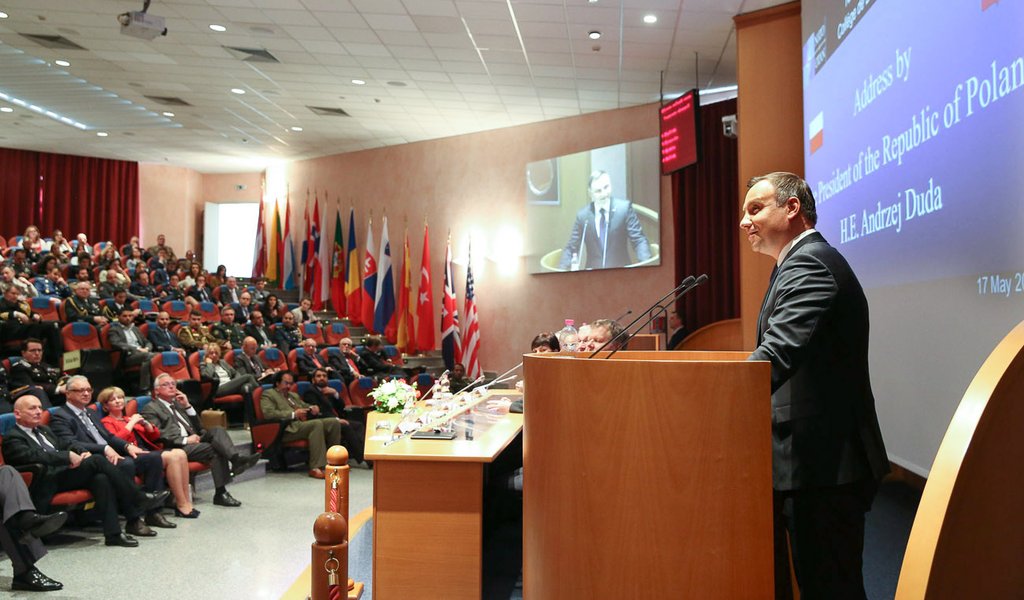 President Duda: NATO Summit must respond to challenges from the East and South

The NATO Summit in Warsaw must provide a response to security challenges coming from the East and South, President Andrzej Duda said at the NATO Defence College in Rome on Tuesday.

President Duda also called for the strengthening of NATO’s Eastern Flank. In his speech titled “The NATO Summit in Warsaw – the Polish Perspective”, the President stressed that “Europe stands on the brink of a radical change in the area of international security, both in the Eastern and the Southern neighbourhood”.

He went on to say that “the annexation of the Crimea and the aggression in Eastern Ukraine threatened the foundations of European security, which consists of: respect of international law, internal sovereignty and territorial integrity”.

The President added that at the same time, instability in Northern Africa and the Middle East is leading to an increased terrorist threat and a continued flow of migrants to Europe.

“These threats and challenges remind us that we must remain strong and united, in order to maintain our security, our values and our way of life,” he said.

Andrzej Duda also said that Warsaw NATO Summit in July “must formulate a clear and loud message of unity, political will and an ability to defend our freedom and promote stability”.

He said that “there is one Alliance and equal levels of security for all members is essential”.

He added that “as allies we also carry greater responsibility for providing security beyond our borders”. That is why the NATO Summit in Warsaw must have a “universal agenda”, providing responses to a full spectrum of security challenges, irrespective of which direction they are coming from.

Duda then listed the three most important aspects of the Summit’s agenda. First, he said, it was essential to ensure the absolute credibility of defence and deterrence capabilities. This is, he said, “the core of NATO and a vital part of all activities”.

The second priority listed by the president was “the importance of remaining open to dialogue with those who do not share our values”. Although Duda noted that this aim might be difficult to achieve, it is still important to try to create “a more predictable form of co-existence with European countries”.

The President’s third key aspect was the development of the open-door policy and partnerships. He reminded that NATO expansion since the end of the Cold War “was a real historical success”.

The Alliance, Duda said, must be able to fully implement the concept of indivisibility regarding the security of NATO allies. That is why defence and deterrence needs to be strengthened, he added.

According to President Duda, the Summit in Warsaw should continue the process of strengthening NATO’s readiness and reaction capabilities, as decided upon during the Newport Summit in Wales in 2014. However, Duda said, the Warsaw Summit needs to go a step further. Within this context, he spoke in favour of establishing an enhanced military presence of NATO troops and defence infrastructure on the Eastern Flank. “Taking into consideration the current state of security, only a real presence will help us guarantee real defence and deterrence,” he explained.

President Duda expressed his hope that decisions made in Warsaw would be effective from both a military perspective as well as be politically acceptable for all NATO member states.

He stressed that when it comes to these operations, Poland was not only a beneficiary but also a “provider” of resources to strengthen NATO’s Eastern Flank. He emphasised that Poland has lived up to its commitments of providing 2 per cent of its GDP for defence and modernising its army.

Andrzej Duda also spoke about the need to take on a wide range of actions, in order to respond to the challenges coming from the South. These include applying NATO’s ability to deter “non-state entities within the international sphere” and continuing operations in response to crises, such as the one currently taking place in the Aegean Sea. “Poland fully recognises the seriousness of these challenges,” he assured.

According to Duda, the Warsaw Summit needs to declare the readiness to increase defence spending. “This is a sign of the Alliance’s credibility,” he said.

“We do not intend to isolate Russia. We are not interested in returning to the Cold War. A balance of fear is not a good recipe for shaping modern international relations,” the President said.

“We need dialogue focused on reducing the risk of error, avoiding conflict and increasing predictability in our relations,” Duda said, adding that “the nature and aim of NATO-Russia dialogue should not in any way hamper the Alliance’s deterrence capabilities and agreements regarding common defence”.

One needs to remember, he said, that a requirement for having constructive engagement is that dialogue “is based on international law and the respect of territorial integrity of all countries”. Otherwise, he said, this dialogue will only amount to empty words.

“I have high hopes that the Warsaw Summit will bring about agreement about a pragmatic approach; an approach based on a sober analysis, not optimistic illusions,” he said. The latter, he said, was often interpreted as a sign of weakness in the history of Europe, provoking aggression as a result.

The President expressed his hope that the Summit would produce a decision on the defence support package for Ukraine as well as closer NATO co-operation with Georgia and Moldova.

He also emphasised the need to deepen co-operation between NATO and the European Union with regards to responding to security challenges, such as the migration crisis, terrorism, hybrid threats, cyber-defence and energy security.

After his speech, the President answered several questions from NATO military officials regarding Poland’s expectations of the Summit as well as relations with Russia.

Duda reiterated that the agenda for the Warsaw Summit must cover the entire spectrum of security issues. He said that “if Poland found itself in NATO, it would also be nice if NATO found itself in Poland and countries in the region”. Within this context, he reminded that the situation in Ukraine continues to be unstable.

He stressed that the Alliance needs to adapt to new security conditions, “which means simply a presence” in countries that are potentially threated by aggression from the East.

He added that NATO also needs to respond to threats from the South. “NATO must be prepared and not let itself get caught off guard by aggressive actions against any member states,” the President said.

Duda pointed out that Poland does not only want to use the Alliance’s security guarantees, it is also wants to actively contribute to strengthening NATO’s potential. That is why, the President said, a mechanised division of the Polish Armed Forces will make its way to Baltic States in the immediate future. Poland also wants to help secure the Mediterranean and the Aegean by dispatching patrol ships and it is ready to send special units to provide training exercises in NATO member states.

Duda said that Poland’s expectations include the deployment of Allied troops on Polish territory, on a permanent basis, even if this takes place on a rotational basis. According to the President, a rotational presence could perhaps even be better as it would allow for exercises to take place with a greater number of soldiers.

The President stressed that Europe “is dealing with the forced movement of national borders”. The Alliance has no choice but to react to this situation, the President said, in terms of military units on the ground as well as the deployment of infrastructure in countries that could potentially be in danger.

According to the President, if NATO does not respond to this situation or if the response is inadequate, then the threat will increase, “as our big neighbour, Russia, does not care about any restrictions”.

He stressed that having dialogue with one’s neighbours, and Russia is a neighbour, is completely normal. He said that he cannot imagine a conflict with a much larger and military stronger country, pointing out however that dialogue with Russia cannot be held from a position of weakness.

“The problem is that this neighbour has been behaving aggressively in recent years,” he said.

He said that the Kaliningrad region is currently the most guarded area in Europe. Russia is currently leading military exercises close to the borders of NATO member countries, where it is strengthening its military potential.

The President said that NATO’s failure to react to this would signify its acquiescence of these activities. He said that an appropriate response by NATO would be to strengthen the presence on the Easter Flank “so that the Alliance demonstrates that it is alive and ready to fulfil its commitments”.

“Today the strengthening of NATO’s Eastern Flank is solely a response to Russia’s actions in the past few years, its refusal to adhere to agreements and appeals,” the President said.

General Janusz Bojarski has been the Commander of the NATO Defence College since 2014. He is the first Pole to hold this position.