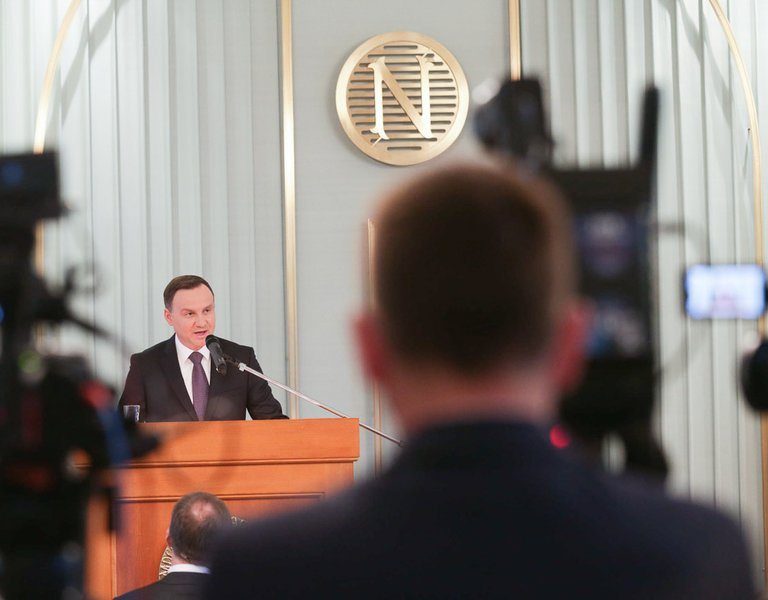 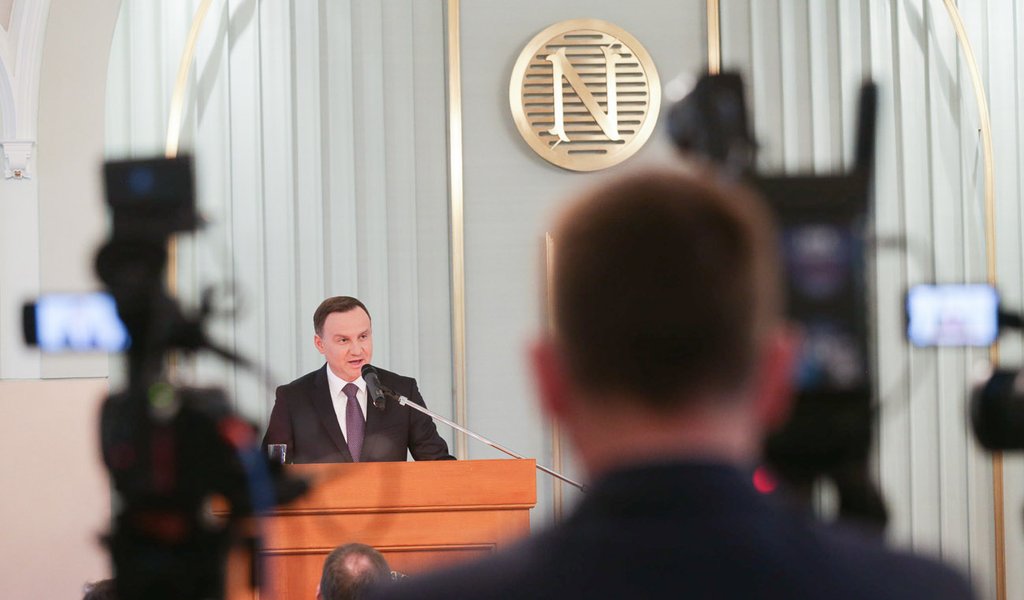 President Duda: The only way to secure peace is through the law

“There would be no justice in the world if the principle that all states are equal before international law was not respected,” Polish President Andrzej Duda said in his speech given at the Norwegian Nobel Institute in Oslo.

Andrzej Duda appealed that all members of NATO should contribute to the common good of collective security.

In his speech on Tuesday, titled "Peace and justice through international law and collective security".  the Polish president underlined that peace is “the highest social value that enables nations to flourish” and that the “obligation to prevent conflicts rests heavily on the shoulders of political leaders.”

“When bilateral treaties proved to be ineffective in securing peace, they turned to multilateral arrangements. Step by step, during the course of history, the concept of universal international law and international institutions materialized”, said President Duda.

“But then came the Second World War. The experience of genocide and blatant violations of international rules of war, as well as humanitarian conventions undermined our belief in the progress of humanity”, President Duda continued.

He noted that Poland, “being the first target of Hitler’s and Stalin’s coordinated aggression, learnt an important lesson before others did: we should collectively defend international law in order to secure peace and justice.”

“The Yalta agreements deprived Poles and other nations in Central and Eastern Europe of their fundamental rights. They were denied the right to choose their own leaders and shape their destiny according to their own will”, President Duda said.

“This experience explains why today the Polish people demonstrate solidarity with the people of Ukraine, as well as any other nation in the world fighting for its right to self-determination”, President Duda said. Poland supports their will “to govern their own destinies without coercion, intimidation and the threat of war”, he added.

“Polish people understand the true value of peace. However, we also know that human freedom and dignity is priceless. That is why we realize that in the long run peace without justice cannot be maintained”, Duda stressed.

According to the President, “There would be no justice in the world if the principle that all states are equal before international law was not respected.” As he pointed out, this principle needs to be respected “no matter how militarily strong or economically developed the states are.”

“We reject imperial concepts, such as the balance of power or the spheres of influence. Ultimately, these notions lead to the balance of fear and bring peace to some, at the expense of others”, President Duda said. He underlined that “there is only one way to secure peace – and that is through the law.”

The Polish President stated that the tragic experiences of both world wars have made people realise that “peace and justice should not be taken for granted.” He added that “they require our profound commitment and must be defended by all of us, both political leaders and our societies. Not in words but in deeds. It is for this reason, that the North Atlantic Alliance was established and founded on the principle of respect for freedom and democracy.”

“In the light of dramatic changes in the security environment unfolding right now, all members of NATO should contribute to the common good, which is collective security”, Polish President declared.

He said that “there are some who doubt whether we can afford a system of enhanced security, which is supposedly too expensive and demanding in financial terms. But we must remember that the price we shall pay now may save the lives of our citizens.”

Andrzej Duda remarked that “over the last few years we have witnessed yet another instance of a blunt violation of international law. Namely, of the principles of territorial integrity and national sovereignty.”

He added that Poles, in the course of history, “have been attached to the principle of peaceful coexistence of nations based on law, freedom and tolerance.” “When others, in their striving for territorial expansion, conquered the weaker ones, Poland chose to refer to the principle of a union based on a voluntary alliance of nations. That is precisely how the Polish-Lithuanian Commonwealth came into being”, Duda said.

He recalled that Poland recently celebrated the 225th anniversary of the so called 3rd May Constitution, Europe’s first and the world’s second constitution.

“The Constitution was an act of law, not an act of force”, Duda stressed. It was not so obvious at that time as “the Great French Nation chose the path of a revolution in its longing for universal liberty”, Duda said.

“We wish to continue on the road of dialogue among nations and respect for international law. It is a universal desire, shared by all nations. It provides a firm basis for our peaceful cooperation in the future. It helps us to view each other not with fear or suspicion but with openness and trust. But above all, there can be no international law without collective security”, Andrzej Duda concluded.