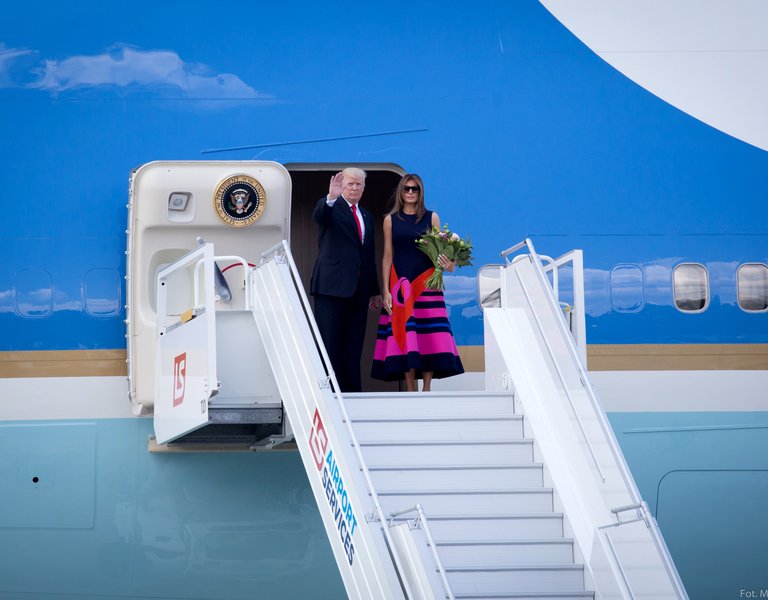 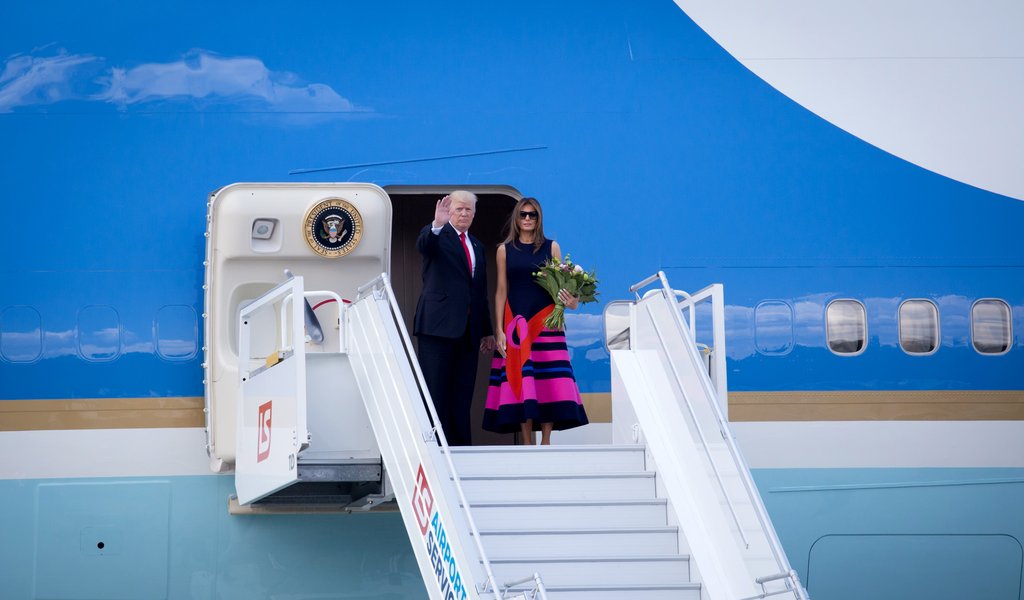 It’s a few minutes past 14.00. Air Force One with US President Donald Trump on board has taken off from the airport runway and is heading for Hamburg to the G20 summit.

The streets of Warsaw are filling up again, traffic is returning to its normal ebb and flow. Two years of preparations, including several months at a pretty intense level, by the President’s team and the Ministry of Foreign Affairs. It is already known that this was not purely a courtesy or symbolic visit, that actually some decisions were made. It is now time to draw conclusions and answer the question whether Donald Trump's visit fulfilled Polish expectations?

But first a few words to recap what happened during those few hours in Warsaw. The president was greeted by large crowds of people, first in the evening at the Marriott, and especially at Krasinski Square. Plenty of people, not only from Warsaw but also from all over Poland. Cheers, Polish and American flags, large screens, slogans on shirts, some pictures bearing Colonel Kuklinski's portraits, a group of American soldiers, banners stating "The same values: God, honour, homeland" as well as "Kosciuszko in America, Americans in Poland". A mood of excitement and anticipation.

The "welcome to Poland" atmosphere prevailed right from the beginning of the visit. Of course, they were exceptions. Such as the Razem party – groups, protesting against the sexist, dangerous "when it comes to women" President Trump, but this was a small minority. On the other hand, the Civic Platform leaders, who had announced their boycott of the visit, turned up in their entirety, as they probably did not want to miss the opportunity to be seen close to President Trump. The security services proved to be effective, and in Hamburg their German counterparts already clashed with leftist militant groups, feminists, alterglobalists and environmentalists – professional protestors.

The programme contained three main points – starting with the meeting of the two presidents at the Royal Palace, one on one. Then attending the summit of the Three Seas Initiative countries, followed by a public speech at Krasińskich Square. From the beginning, President Trump did not spare Poles any compliments: repeating phrases such as "Poles are a great nation", "our great ally", "rich in history", "we have an unshakeable spirit", and "Poland and America have never been as close as they are now".

The obvious courtesy is usually present on such occasions - but in the Royal Castle and on Krasiński Square there was genuine respect and sympathy, which is probably rooted in Trump's experiences with Americans of Polish origin during the election campaign, contacts with our businesses, plus of course the kindness with which the Poles pay their NATO membership fees.

So first of all, what did the Polish government expect of the American president? Well, that he would talk about security, especially in our region. That he would assure us that he is aware of the risks to the region emanating from Russia, and that in case of aggression, we will not be alone. Support for the concept of the Three Seas Initiative, which is to be based on infrastructural assumptions, in addition to ensuring long-term energy security and the possibility of purchasing state-of-the-art military equipment to upgrade the army. And the expansion of economic cooperation so that "the American flag not only flies high at the embassy, ​​but also over many businesses."

We also expected confirmation of Article 5, mentioning military solidarity at times of need. We, in turn, wanted to present ourselves as a political and economic ally, and demonstrate the potential of Poland as a regional leader. And what did we receive? Frankly speaking, following the two points of the visit, apart from the kind compliments, I was left a bit wanting.

Yes, we obtained approval to buy modern equipment, “polonised” Patriot missiles, that is those adapted to our needs. Both sides signed a memorandum on the matter on Wednesday evening. Then comes the issue of diversification of energy sources, "so that Poland is never trapped by the monopoly of one supplier". President Trump declared his willingness to export gas to Poland and to other countries in the region. Also important was the invitation to work together to stabilize the situation in Syria and to end the humanitarian disaster there. And reiterating several times the durability of the alliance between the United States and Poland. A common thinking about media freedom was signalled - media pluralism as an important element of democracy, and shared opposition to pathology.

Both President Trump and Duda mentioned the ill-fated situation in their own backyard - American problems with the bias of CNN and NBC, and in Poland the "silencing" of Duda's political activities, such as the important visit to Croatia, preparing for the Three Seas summit. They both agreed that we need a free but fair media. On the other hand, there was no mention of the permanent presence of American troops in Poland, nor the assurances of joint commitments to Article 5. And frankly speaking, few expected that, apart from the next batch of compliments, Donald Trump's speech on Krasiński Square would change anything. We have not become accustomed to praise, history has not spoiled us in this department.

The Warsaw Uprising Monument, the resistance anchors, Polish banners, veterans, a huge crowd. On many occasions we have listened to Trump's speeches on American soil, in which he made the case for "America first!". But that was something completely different! In essence, it was the first official presidential speech of the United States after the election. First we heard that "your nation is great, because your spirit is great," he then spoke about our more than 100 years of captivity, about how we lost our land, but preserved our pride. The fact that "Poland is a land of great heroes", that "Poles know the value of hope, because for a long time hope was the only thing we had in making good triumph over evil”.

Donald Trump talked about the partitions, about 1918, he knew about the miracle of the Vistula and the Polish-Soviet war, about the double aggression of our neighbours in 1939, he did not even mistake the Warsaw Uprising with the Uprising in the Ghetto - which happens to many Western politicians, and he knew who created the “death camps.” One can tell that he has much better advisors than Obama, and the accuracy of knowledge about Poland’s history and the tone suggests that there might be individuals of Polish origin among them.

Trump also promised to negotiate with Russia to restore stability in the region, to keep borders closed against all kinds of extremism, especially Islamic terrorism, to protect them from "those who want to undermine our civilization and its values." Speaking about those civilizational values ​​that need to be defended, he used the example of the defence of the "barricade on Jerusalem Avenue in 1944". He also mentioned his confidence in the role of the family, his lack of trust in "a bureaucractic state", and added that "women are the pillars of the family and society" and that "if we do not forget who we are, no one will be able to defeat us."

He ended his powerful ode to values with the American "God Bless Freedom, Family, God and Homeland!" It was a very emotional speech with content that was so in line with the views of Polish conservatives that I did not believe my own ears. And in addition, he also made the much anticipated pledge, stating that "we stand shoulder to shoulder, defending Article 5, a collective commitment to collective defence."

As far as beginnings go, this was very promising. The rest will come later, and our diplomatic corps will have to continue its work. For centuries it has been known that the most important thing is a community of values, and preferably values ​​and interests. And these two elements were stressed in Warsaw. Trump's visit not only fulfilled our expectations, it also signalled that we are not alone in cherishing these values. And we finally have the political leadership that really leads a "true" foreign policy, one that is in line with the interests of the state and its citizens, as in the old democracies. The significance of the event was also made evident in the fact that President Trump met with leaders from Eastern Europe, Poland, before meeting with Merkel and Putin in Hamburg - a few months ago this would have been unthinkable. Because the "ugly maiden should sit in the corner and keep silent". But perhaps - as many of us never doubted - Poland is not only a beautiful lady, but is also brave and has character? The speech of the President of the United States is a priceless promotion of Poland in the world, its history and aspirations. Europe and the world heard it, whether they wanted to or not. And who knows, perhaps they will even remember some of it?