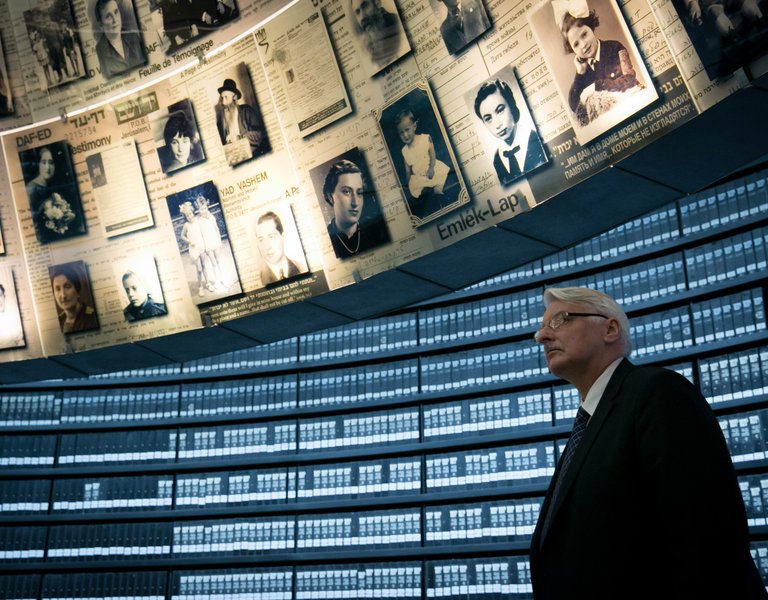 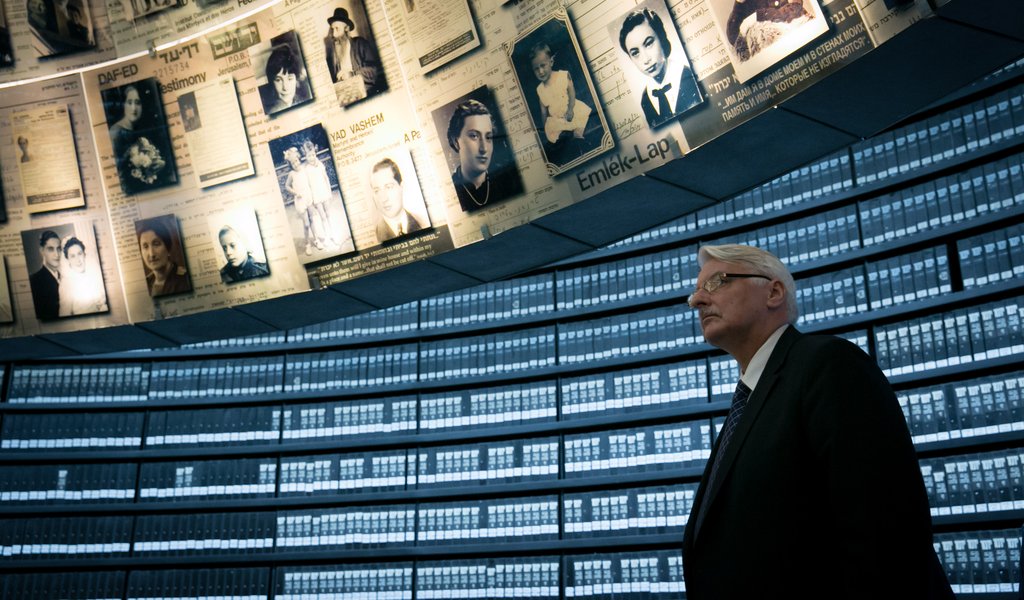 Shared history and focus on the future

Waszczykowski’s three-day visit to Israel was his first since taking office in November 2015. During his stay, the Polish foreign minister met with Israeli Prime Minister Benjamin Netanyahu and other high-ranking officials.

The main objectives of the visit were “to confirm the very good state of Polish-Israeli bilateral relations as well as to emphasize Poland’s efforts directed at creating peaceful solutions to the conflicts in the EU’s southern neighbourhood”, Minister Waszczykowski told Israeli daily Yedioth Ahronoth. “This visit also follows an intensification in recent months of our bilateral contacts at the highest level with Israel and other partners in the Middle East, including Egypt, Jordan, Lebanon as well as Palestine. It also serves as a preparatory element for the G2G intergovernmental meeting in November as well as the Polish president’s upcoming visit to Israel, Palestine and Jordan”, Waszczykowski added in the interview.

Minister Waszczykowski started the meeting with Netanyahu by offering his condolences in connection to the Palestinian attack in Tel-Aviv last week. Talks between Waszczykowski and Netanyahu were largely dedicated to contemporary “Polish-Israeli relations” and security issues.

A significant part of the meeting was devoted to the fragile political situation in the Middle East. “We exchanged views on Iran. It is a difficult partner, a state with large ambitions which go far beyond the region. At the moment, we look optimistically at Iran. On the Israeli side, there is a certain dose of scepticism regarding Iran’s intentions”, said Waszczykowski who once served as Polish ambassador to Iran.

Waszczykowski and Netanyahu also discussed the war in Syria, the migration crisis. “I explained the European policy regarding these issues”, the Polish foreign minister said.

Speaking of relations between Israel and Palestine, the Polish foreign minister pointed out that the two parties have a different approach to reaching a peaceful solution: “Israel would like to do it step by step, slowly. Palestinians would prefer a global, one-time solution.” 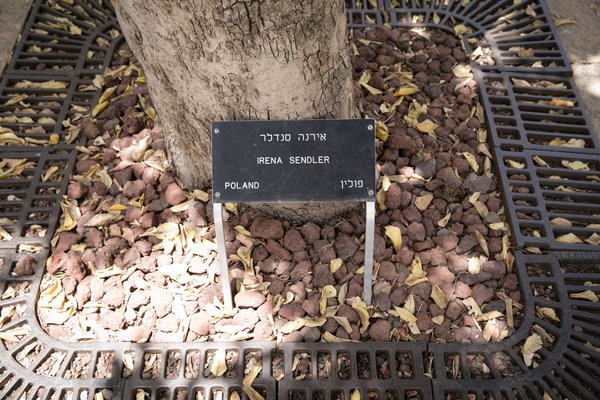 As history is a very important issue for both Poland and Israel, Minister Waszczykowski stressed after meeting with Netanyahu that it has to unite two nations, not divide them. The Polish foreign minister underlined that Israelis coming to Poland should not limit their stay to visiting German Nazi concentration camps but also have an opportunity to see a different face of Poland. “We want young Jews not only to associate Poland with the Holocaust, but also to discover Poland for what it is – a modern and dynamically developing country in the European Union”, Waszczykowski said in an interview with the Yedioth Ahronoth.

Another key part of Waszczykowski’s trip to Israel was his visit to the Yad Vashem Institute in Jerusalem where he paid tribute to the Righteous Among the Nations, non-Jews who risked their lives during the Holocaust to save Jews from extermination by the Germans. Poles are the most numerous group among them.

“There was a handful of people who wanted to help and Poles were among them,” said Minister Witold Waszczykowski. He also noted that brave Poles such as Jan Nowak-Jeziorański and Jan Karski, managed to inform foreign decision-makers about what they knew about the Holocaust. “We should not forget about Witold Pilecki, who organised resistance in Auschwitz,” added the minister.

While in Jerusalem, the chief of Polish diplomacy visited Mount Zion and laid a wreath at the memorial at the cemetery where soldiers who fought in the Polish II Corps commanded by General Władysław Anders during Warld War II are buried.

A visit to the Palestinian National Authority was another stage of Waszczykowski’s trip. In Palestine’s capital, Ramallah, the Polish foreign minister met with the Palestinian Foreign Minister Riad Malki and Prime Minister Rami Hamdallah to discuss recent consultations held in Paris, the Israeli-Palestinian peace process and bilateral issues. 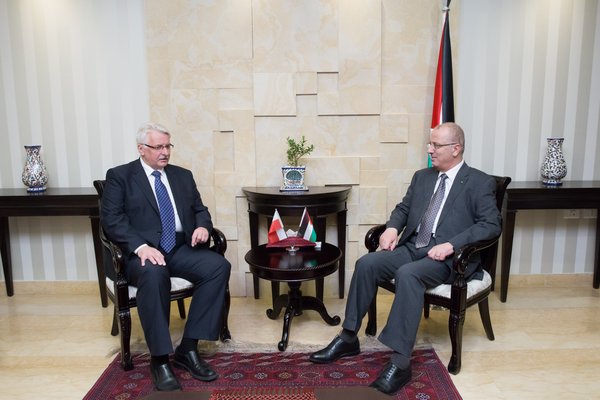 “We share a similar opinion about the situation in the region and about the root-causes of the Israeli-Palestinian conflict. We discussed what kind of threats this conflict could bring to Europe and to Palestine. We talked about possible solutions – one of them is political and economic cooperation between Palestine and the EU. The EU has a lot to offer in this regard,” Waszczykowski said after meeting with Palestinian officials.

In an interview with WAFA, a Palestine News Agency, the Polish foreign minister referred to Polish-Palestinian relations: “Last year we celebrated 10 years of the Polish diplomatic presence in Ramallah. Within the last decade, Poland has strengthened its cooperation with Palestine at the government, parliamentary and local government levels. Our political dialogue led to the establishment of a Joint Ministerial Committee. Poland continues to support the international community’s efforts to resume the Middle East Peace Process.”

Foreign Minister Waszczykowski also noted that the experience of Polish history enables us to understand the aspirations of Palestinian people to independence and freedom. “We also know that achieving them requires a long and difficult process of building compromise and consensus. We support the approach to the settlement of the Israeli-Palestinian conflict in the form of a comprehensive political agreement between the parties, guaranteeing a lasting and sustainable truce. Such an agreement should meet the expectations of both sides: the aspirations of the Palestinians to live in a sovereign, democratic state and the security of Israel,” Minister Waszczykowski said.

New opportunities for the Polish-Israeli partnership

Although the Middle East region is not the main focus of Polish foreign policy, the large Jewish population living in Poland for centuries created a special bond between both nations. Unsurprisingly, many Israeli public figures’ families come originally from Poland, just to mention the parents of Israeli prime minister, Elisha and Benzion Netanyahu who were both born in Warsaw in the early 20th century.

Poland and Israel resumed diplomatic relations 26 years ago after the collapse of the Soviet bloc. As The Jerusalem Post reports: “Although Jewish life in Poland will never be as rich as it was prior to the Nazi Holocaust, the country has experienced a resurgence of Jewish identity and culture since the Communist regime fell in 1989. Today, Poland boasts a small but vibrant Jewish community.”

“Polish-Israeli relations have a special, privileged character”, Waszczykowski told Yedioth Ahronoth. Even though, he said, “the shared history of our nations is very long and complicated, we are not afraid of talking about it openly.” “But we are also focused on the future and are looking for new opportunities for our Polish-Israeli partnership ,” the Polish foreign minister concluded.