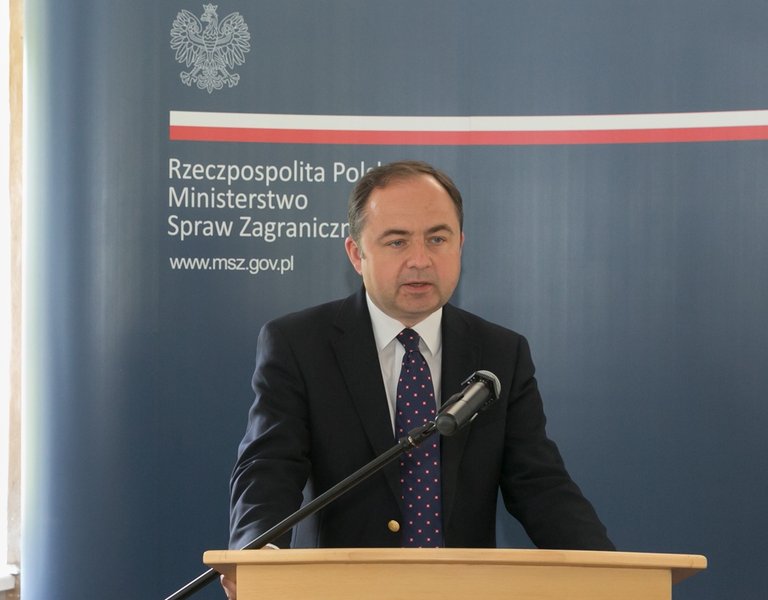 The EU needs to rebuild its leadership. The only way this can be done is through member state capitals, says Deputy Foreign Minister Konrad Szymanski.

Jędrzej Bielecki, Rzeczpospolita: In the West it is often said that the PiS victory in 2015 has paved the way to power for extremists and populists, such as the Front National in France, the Five Stars Movement in Italy, Podemos in Spain and the Freedom Party in the Netherlands. Would the electoral success of these groups make it easier to push through the EU reforms demanded by the Polish government?

Konrad Szymański, Secretary of State at the Ministry of Foreign Affairs: One really has to know very little about Polish and European politics in order to put all of these groups, including PiS, into the same basket. I would recommend that anyone propagating these views to approach these questions both seriously and rationally. Brexit demonstrated very clearly that offending and scaring people doesn’t work. PiS is a governing party and does not need to prove anything to anyone. For the last year we have been part of the fresh solutions in all important European issues.

Successive Polish governments have up to now advocated strong leadership from the European Commission, an institution that defends the interests of smaller member countries from the actions of large countries. However, in recent months this assumption has not played out – as was seen with the Posted Workers Directive and provision for transport services. Is this the main reason why the current Polish government seeks to weaken the European Commission’s standing?

The European Commission promised to de-politicize its role and, unfortunately, it has not kept its word. This is a fundamental change of practice compared to the first years of our membership. The head of governments are there to deal with politics. Not only do they represent states, without which there wouldn’t be a European Union, but more importantly they have a clear mandate to make difficult decisions. In these tough times, the EU needs to rebuild its leadership. The only way this can be done is through member state capitals.

Brussels is conducting proceedings regarding the principles of democracy and the rule of law in Poland. Are plans to weaken the role of the Commission an act of revenge?

In our opinion, the Constitutional Tribunal issue has nothing to do with the EU. Our demands are based on serious systemic reasons. Anyway, I wouldn’t say that we seek to weaken the European Commission. We want it to return to its strictly treaty-based role and above all to strengthen the European Council (composed of the leaders of member states – ed). This is the only way that states can regain responsibility for the EU. We need this to happen urgently, so that this project doesn’t die.

In the last few years, the Commission has not managed to tackle the most important challenges facing the EU, in particular the financial crisis, the refugee crisis, and foreign crises (Ukraine, Syria). As a result, the EU’s largest countries are carrying the burden. Do you think strengthening the position of the European Commission president by staging general elections in the EU for this position would remedy this situation?

Such a solution would lead to an even deeper politicisation of the Commission. Direct voting across the EU would not be an option due to the lack of a European demos. We actually need the opposite to happen. The Commission is good at managing the EU when everything is going well. Once the EU entered several simultaneous crises, Brussels demonstrated its political incompetence. All important and key decisions have been produced by heads of government. The Commission is very helpful in this process, but it is not up to the task of average politics.

An intergovernmental decision-making mechanism is said to be a possible system that could – at least in some areas – replace Brussels leadership (the community method). Almost 30 years after the fall of Communism, does Poland feel strong enough to act independently with the EU’s biggest countries?

The community method remains an important element of the EU. On the other hand, I have never shared the opinion that it gives us particular comfort in leading our own policies based on intergovernmental politicking. We have always known this, just we didn’t want to see things as they really are. Today, Poland has clearly defined interests and they go beyond what can be arranged using the community method. Especially as the European Commission itself is abandoning it and wants to become political. The issue of the Posted Workers’ Directive mentioned earlier on is a good example of this. The Commission ignored the opinion of 11 parliamentarians in the EU, in order to provide political support for one or another government in the lead up to elections.  This is not a noble, altruistic community that the propagators of integration say it is.

Poland is not and does not plan to be a member of the Eurozone. Is strengthening intergovernmental cooperation a way to prevent the creation of a "tough core" being formed within the Community regarding the monetary union?

Before I get scared of a tough core within the EU I would actually want to see it with my own eyes. At the moment, instead of the realisation of political visions – whose origins date back to 1994 – we read of more empty declarations which more or less skilfully avoid details such as the imbalances in the euro zone, the chronic indebtedness of the South and the obvious opposition by the North to any transfers. We are outside the Eurozone and yet our economic-political synergy with German is more obvious than that of many countries within the monetary union.

After leaving Brussels, Jose-Manuel Barroso took on a job at Goldman Sachs, a bank that symbolises the wrongdoings that led to the financial crisis. Neelie Kroes secretly managed a fund registered in Panama and when he was prime minister of Luxembourg Jean-Claude Juncker defended secret bank accounts. How strong is the European Commission’s moral authority?

Please release me from considerations regarding moral authority. The Commission has always built its authority on impartial action in the common interest. The problems will pass once it returns to this role.

How would the intergovernmental method be strengthened? Is it necessary for treaties to be changed? Should one formally limit the prerogatives in certain areas, and if so, in which ones?

In the short-term, one should change the rules governing the work of the institution. It is also a question of practice. Perhaps the inter-institutional agreement stipulating the rights could bring consolidation of these new rules. In the long-term, treaty changes should not be ruled out. I can’t imagine a fundamental renewal of the European project without such changes. The ease of making decisions cannot be the only criteria. What is also important is the quality of these decisions – political imagination.

Traditionally, France has been in favour of strengthening intergovernmental co-operation in the EU and it seems that Angela Merkel’s government in Germany is heading in a similar direction. Are these our main allies in reforming the EU? Do our partners in the Visegrad Group, smaller countries, fear that such a constellation might lead to power be held by a “concert of big countries”?

Every union needs a balance of interests. With such a dense institution as the EU, this balance needs to be assured by institutional guarantees. When it comes to the ease of intergovernmental rules I envisage guarantees for all states rather than the risk of alienating them, which is encouraged by voting by majority. I don’t know what Paris intends to do, but Warsaw and Berlin will definitely not contribute to the fragmentation of the EU. We believe that the EU needs a large scale. This is what gives us our subjectivity.

Brexit was the most serious blow in decades to European integration. Is this a good moment for reforms that will weaken Brussels even further?

The EU will live on so long as states see it as providing an added value. There is no EU without the will of the states. We are not looking to weaken Brussels just for the sake of it. We want to strengthen states, so that they feel responsible for this project. This responsibility in politics stems from a sense of co-ownership, from a guarantee of influence. This is the only EU there is – and there wont be any other one.