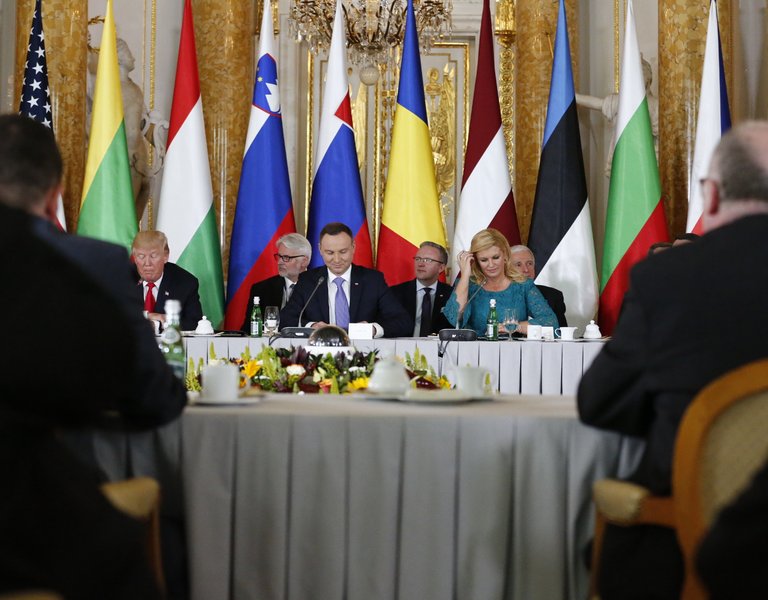 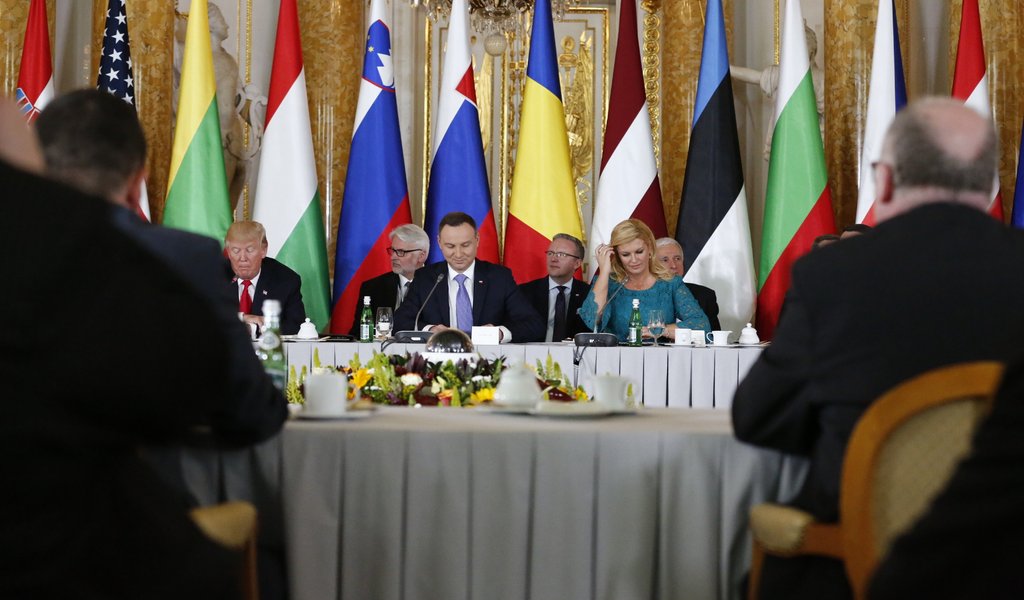 More than 150 "huge infrastructure projects" can be carried out in Central and Eastern Europe, Polish President Andrzej Duda said at the Three Seas Summit in Warsaw on Thursday, referring to an expert study commissioned by his Croatian counterpart Kolinad Grabar-Kitarović.

"As heads of state we should support cooperation in the Three Seas area, including economic and political cooperation. I count on our governments and our local governments to become involved, but I especially count on businesses and hope these undertakings will be implemented", President Duda said.

"Let me just remind you, so that you know what the prospects are, that our friends from Croatia (...) have an expert opinion which shows that 157 huge infrastructure projects can be implemented in our part of Europe", he added.

Speaking at the Three Seas Summit in Warsaw President Donald Trump said the Three Seas initiative will rebuild the whole region. It will also guarantee the local infrastructure, just like the region's obligations regarding security and freedom, will tie Central Europe to the whole of Europe and the whole of the West.

The US President also affirmed American support for the creation of the Three Seas business forum so that the region's countries could use the best talent to design the best energy projects. This would mean operating below costs and before time. Donald Trump said he loved such projects.

The US President added new infrastructure was of prime importance. He also expressed hope the Three Seas countries would pursue similar goals to America's. Donald Trump said America was doing great things, stressing its stockmarket was very bullish, unemployment lowest for 16 years and the US Army becoming ever stronger.

The US President said America would seek to extend access to energy markets, lower barriers to energy trade, and boost energy security. He said the Three Seas initiative had potential to reach all of those goals very quickly. This is because the region has great people, who will accomplish this really quickly. Donald Trump congratulated the region's countries on having already begun the most vital projects. He said they would open up Central Europe to greater access to energy markets and remove barriers to energy trade.

Speaking at a joint press conference with his Croatian counterpart, Kolinda Grabar-Kitarovic, the President said the main objective of the Three Seas initiative was to develop infrastructure and make the region more secure. This includes energy security, in Central Europe and by extension, in the whole of the European Union.

Andrzej Duda emphasised that this was a vital task. The region had to be made more cohesive and even better linked to Western Europe.

The region has to catch up with the West in terms of transport infrastructure, that is, roads and railways, but also telecommunications and energy. In the West this has been steadily developed since the end of the second world war, in line with the principles of the social market economy, the President stressed.

Andrzej Duda added the region's heads of state were providing a sort of umbrella over the whole initiative. "We want to encourage our central and local governments to cooperate, but this is first and foremost about business cooperation. That is why today we have made a joint declaration which points towards our future actions and our objectives", the President explained.

"We have decided to create a business forum of the Three Seas countries. We have also decided to organize a meeting of our foreign affairs aides, who will thrash out future lines of action."

The Romanian president on Thursday offered for his country to organize the 3rd summit in Bucharest, next year, Andrzej Duda added.

"We were delighted to accept this invitation. We hope that, having worked hard throughout the next year, we will be able to sum up our achievements in Bucharest. We hope that in the meantime, fresh deals will be struck for further concrete investments, apart from those already underway", the President concluded.

The joint Polish-Croatian Three Seas Initiative is not directed against anyone; just the opposite, it seeks to enhance cohesion in Europe, the European Union and the transatlantic community, Croatian President Kolinda Grabar-Kitarovic declared on Thursday.

Grabar-Kitarovic described the Three Seas Initiative as an informal mechanism for cooperation among presidents "to exchange views and launch projects that can involve civil society and business".

The Three Seas Initiative seeks to strengthen ties among countries between the Black, Baltic and Adriatic Seas. It is a joint idea by the presidents of Poland and Croatia that concerns the economic cooperation of 12 countries in Central and Eastern Europe as well as the Balkans in areas such as energy, transport and digitisation. The initiative brings together Poland, the Czech Republic, Slovakia, Hungary, Lithuania, Latvia, Estonia, Croatia, Slovenia, Bulgaria, Romania and Austria. 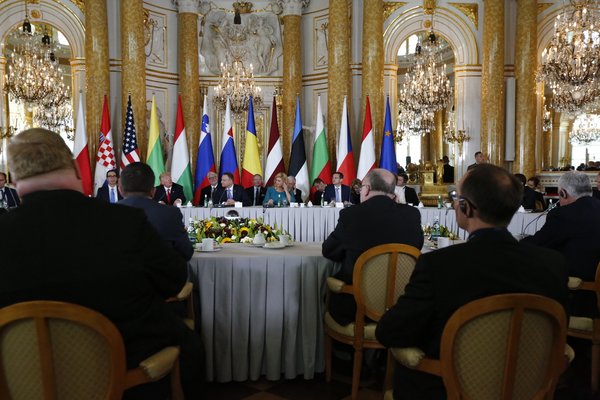 THE SECOND SUMMIT OF THE 3 SEAS INITIATIVE
Joint Declaration

Presidents and their representatives gathered at the Second Summit of the 3 Seas Initiative, representing 12 EU member states located between the Adriatic, the Baltic and the Black Seas: Austria, Bulgaria, Croatia, the Czech Republic, Estonia, Hungary, Latvia, Lithuania, Poland, Romania, Slovakia and Slovenia:

Agreeing with the notion that the countries within the 3 Seas Initiative with their potential constitute a dynamic region, whose development depends, among others, on the coordinated efforts of the whole region;

Highlighting their successful European connectivity along the East-West axis achieved thanks to such financial instruments as the Connecting Europe Facility (CEF), European Structural and Investment Funds (ESIF), as well as the synergy effect of the existing and future macro-regional strategies implemented by the European Union;

Recognizing the long-established, successful regional and subregional mechanisms which have fostered extensive cooperation and development among our countries and continue to be important actors in strengthening cohesiveness;

Taking note of the significance and validity of challenges resulting from the differences of transport, energy and telecommunications networks in the region of the 3 Seas Initiative, which constrain the dynamic growth of economic relations among our countries and ought to be further developed;

Taking advantage of the available instruments allowing for their further development, which will in turn facilitate the process of achieving, strengthening and cementing the unity of the European Union;

Hereby acknowledge the high value of intensified cooperation in the form of the 3 Seas Initiative, focused on supporting investments in the fields of the economy, transport connectivity, energy infrastructure, environmental protection, R&D and digital communication within the 3 Seas Initiative region;

Hereby underline the fact that the 3 Seas Initiative is a flexible Presidential Forum which provides political support to foster a more effective cooperation of governments, business entities and non-governmental organizations interested in boosting regional bonds, while recognizing that achieving concrete results within this Initiative requires an active involvement of the respective governments and working contacts among respective Presidential representations;

Hereby point out that the 3 Seas Initiative has the following priorities: enhanced transportation connections of our region to develop and further integrate into the trans-European transport (TEN-T) network, implementation of the Union’s Energy policy objectives, promote business character of joint economic projects, full synergy with the EU policies;

Hereby reaffirm that the 3 Seas Initiative is open to interested business entities from all over the world and global partners;

Hereby reaffirm that the 3 Seas Initiative shall function on the basis of several principles, most importantly: membership of the EU, long-term nature of joint plans, openness to business circles, as well as better defining and promoting drivers of modernization in the region;

Hereby welcome the establishment of the 3 Seas Business Forum which shall bring together economic entities interested in economic cooperation aimed at enhancing economic bonds within the region.