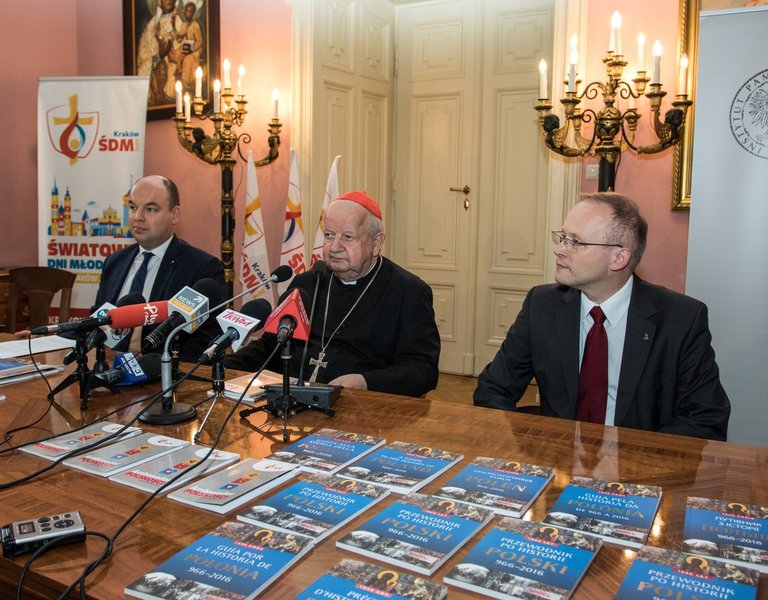 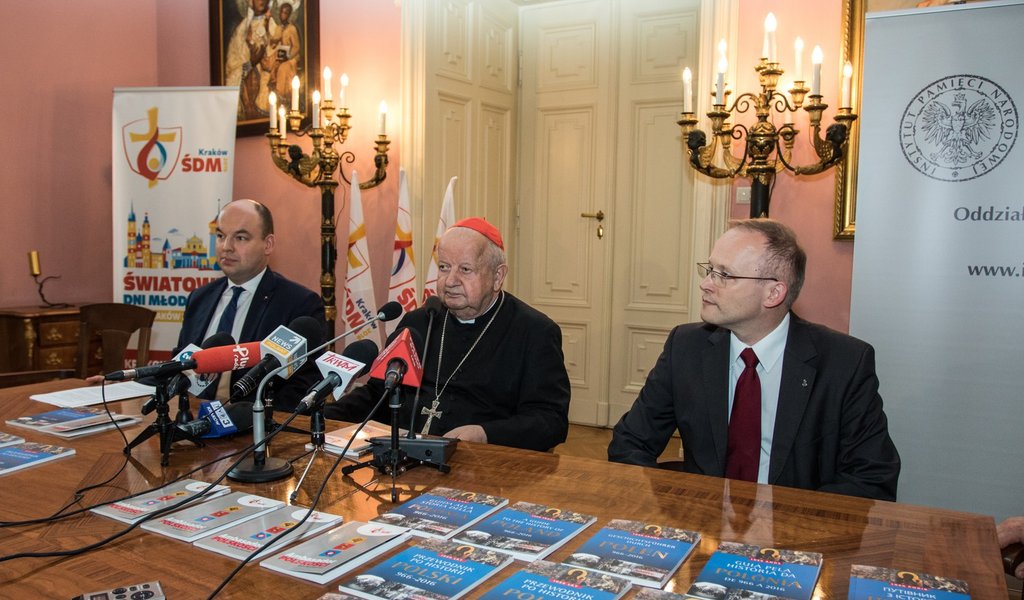 Advice for pilgrims and a guide for hosts

Working in co-operation with the Institute of National Remembrance and the Polish League Against Defamation, Poland’s Ministry of Foreign Affairs has published two special pamphlets for World Youth Day 2016 held in Krakow. The publications were presented at the headquarters of the Krakow Curia last week.

One of the publications, titled “1050 years. A guide to the history of Poland 966 – 2016” was co-published by the Ministry of Foreign Affairs and the Institute of National Remembrance (IPN) with a circulation of half a million copies. It is a compendium about Polish history written for foreign pilgrims. The second publication, “Ambassadors of Polishness”, published by the MFA and the Polish League Against Defamation with a circulation of 250,000 is targeted at Polish households hosting pilgrims and includes guidelines on how to promote Poland.

The Archbishop of Krakow, Cardinal Stanislaw Dziwisz, said that the publications demonstrate the exemplary co-operation between the national authorities and the Church. The Deputy Foreign Minister, Jan Dziedziczak, stressed that especially the guide to Polish history constitutes “one of the biggest operations of Poland’s historical diplomacy”.

The publication titled “1050 years. A guide to the history of Poland 966 – 2016” is a popular science historical brochure aimed at foreign visitors to World Youth Day. It was co-published by the MFA and the IPN and has a circulation of 500,000 in addition to being published in nine languages: Polish, English Russian, Ukrainian, Spanish, Italian, Portuguese, German as well as French.

The MFA’s Press Office informed that the 117-page long publication “presents the history of Poland as well as the roots of our identity, Christian traditions, accomplishments and its contribution to European civilisation. It was authored by the Director of the IPN, Lukasz Kaminski, and the Head of the Historical Research Department at the IPN in Krakow, Maciej Korkuc. It also includes forewords written by Andrzej Duda, the President of the Polish Republic, and Cardinal Dziwisz.

The “Ambassadors of Polishness” publication was published in Polish by the Ministry of Foreign Affairs together with the Polish League Against Defamation and is aimed at Polish households hosting foreign pilgrims. It includes a short guide on promoting Poland – what needs to be conveyed to foreign pilgrims and youth so that they take away with them a positive impression of Poland after attending World Youth Day. 250,000 copies of the publication have been published.

The publications will be distributed to all dioceses in Poland and to parishes of the Archdiocese of Cracow hosting WYD pilgrims in addition to other places visited by pilgrims, such as the Auschwitz Museum as well as the Museum-House of John Paul II in Wadowice. Both publications will also be available online on the websites of the Ministry of Foreign Affairs and the Institute of National Remembrance.

Cardinal Dziwisz said during the presentation of the guides that “these important publications will fall in the hands of not only pilgrims but also people hosting them, making them ambassadors of Polishness”. “Our meeting is also testimony to the good co-operation that is bearing fruit. Some of these fruits have already been born – during the WYD preparations in Poland, in particular in Krakow. Without this co-operation the Church would not have been able to do what we have done. At the same time, the state sees the great importance in the meeting of young people from all around the world. It is a great and beautiful way of promoting Poland to the world,” the cardinal said. “This promotion will no doubt widen contacts, also for the state authorities – in terms of economic as well as political contacts. The Church and the Polish state have understood the great significance and value of this meeting in Poland,” the cardinal stressed.

“WYD is the biggest event in 25 years to be attended by our friends from abroad and that is why the MFA, which is responsible for Poland’s image abroad, has decided to lend a hand in supporting this great initiative. It is important for us that people learn about Poland and that as many people as possible find out about our history. It is worth investing in youth, it is worth showing Poland as it really is, it also worth correcting various falsities about Polish history that have been doing the rounds,” Deputy Foreign Minister Jan Dziedziczak said.

“You have everything here, starting from the Middle Ages, to information on how Poland has always stood on the side of Christianity (…); we emphasise that Poland was a country which never collaborated with totalitarianism (…), we also show elements that are often falsely presented by the foreign press: we present the history of Poles saving Jews, the role of the Church in this process, the role played by Poles is cracking the Enigma code – all of these things that should be known by people visiting our country,” Dziedziczak said. “History is an investment in the future, it is an important diplomatic tool (…), which helps us build a positive image of our country,” the Deputy Minister pointed out. He described the publication with a circulation of 500,000 as “one of the most important operations of Poland’s historical diplomacy”.

According to Lukasz Kaminski, the Director of the Institute for National Remembrance and a co-author of the guide, the “publication acquaints us with Polish history, it encourages us to learn more about it, but it also explains who we are today, because after all our identity is rooted in our entire history”.

“This publication presents our pride in our history, but we also do not hide difficult topics or defeats that took place. As we write in the conclusion, we look at our history with pride but we also try to learn from our mistakes and defeats,” Dr. Kaminski said. He said that “difficult topics are for example linked to the crisis, and the fall, of the Polish state in the 18th century, and we also included Jewish themes to the extent that was possible in such a publication”.

World Youth Day 2016, held under the slogan “"Blessed are the merciful for they will be shown mercy”, will take place in Krakow and Wieliczka between 26 and 31 July 2016. This is the second time that Poland is hosting the event – the first time was in Czestochowa in August 1991.