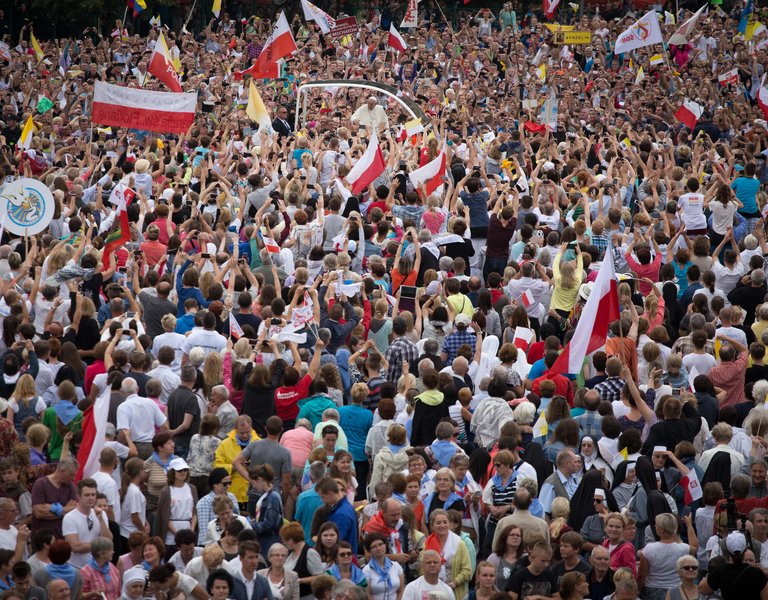 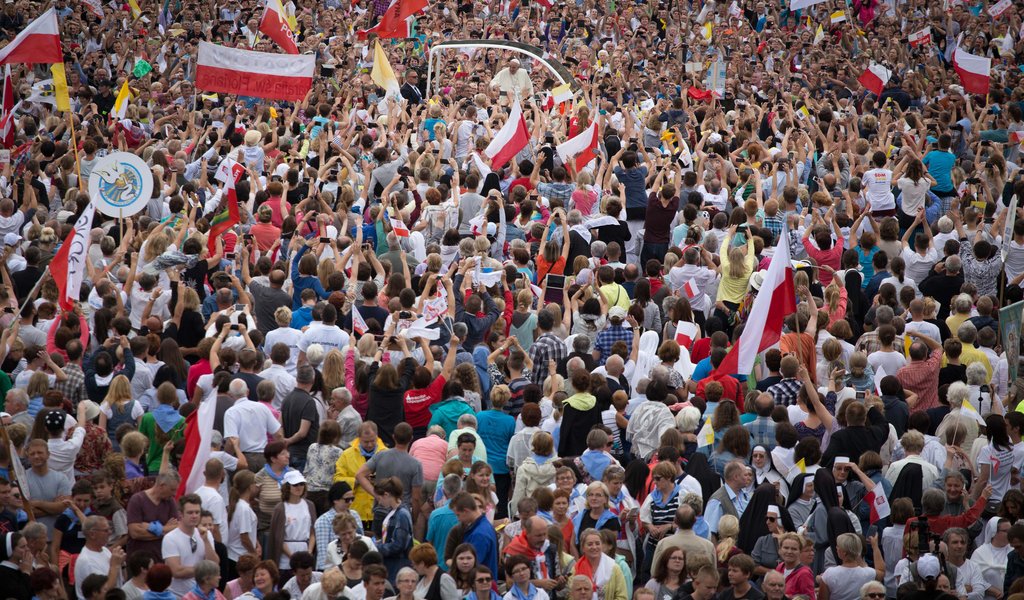 Holy Father Francis said it was significant that the current 1050th anniversary of Poland’s baptism coincides exactly with the Jubilee of Mercy. Yesterday at Jasna Gora, the Peter of our time presided over a great thanksgiving ceremony for the gift of the Christian faith that our country has received.

Instead of going by helicopter, as previously planned, the Holy Father travelled yesterday morning from Krakow to Czestochowa in a car, owing to adverse weather conditions. Once at Jasna Gora, the pope drove in a panoramic car among hundreds of thousands of the faithful who had gathered in Blonia Park, and in the alley in front of the Jasna Gora shrine. He was welcomed to huge applause and cheers. National flags and banners with the names of pilgrims’ home towns were waved over their heads. The faithful shouted out “welcome, Holy Father!” Before entering the monastery, Pope Francis blessed a sick girl.

In the Chapel of the Miraculous Image

Pope Francis prayed in the Chapel of the Miraculous Image in front of the icon of Our Lady of Jasna Gora, which had always been his great wish. He was welcomed by the General of the Pauline Order, Father Arnold Chrapkowski, who emphasized the special character of the Marian shrine of Jasna Gora. He recalled the words of St. John Paul II, who used to say that it is there that “the heart of the Polish nation beats.” “For over 600 years, Our Lady of Jasna Gora has been embracing with her motherly love the nation that had chosen her as its Queen. Many of our brethren from Poland and from almost all over the world find here the way back into the open arms of the merciful Father. It is here, under Mary’s motherly eye, that we receive new life and new strength to carry the human weakness towards the fullness to which we have been called,” said the general of the Pauline Order.

Just like his predecessors, St. John Paul II and Benedict XVI, the Holy Father offered a golden rose to the Mother of God. It is a gift granted only to the most important shrines in the world. Then, Pope Francis said the “Hail Mary” prayer in Latin and blessed the faithful. Pauline fathers presented the Pope with a chalice and a copy of the Miraculous Image of Our Lady. It is a sign of spiritual communion between “the Vatican hill and the Jasna Gora hill”, and a sign that the shrine prays for the Successor of St. Peter.

“Through unity, the journey of your people has surmounted any number of harsh experiences. May the Mother, who stood steadfast at the foot of the Cross and persevered in prayer with the disciples in awaiting the Holy Spirit, obtain for you the desire to leave behind all past wrongs and wounds, and to build fellowship with all,” Pope Francis told the pilgrims gathered at Jasna Gora.

The thanksgiving Mass celebrated by the Pope at Jasna Gora on the occasion of the 1050th anniversary of Poland’s baptism was attended by around 600 thousand faithful. Performed in Latin, the Liturgy began with Bogurodzica, a song to the Mother of God associated with the beginnings of Christianity in our lands. The Liturgy of the Word and the chants were in Polish. The altar’s decoration was themed around the anniversary of the baptism and the place, that is a Marian shrine.

The Eucharist was attended by Polish bishops, representatives of Episcopal Conferences from all over the world, and Poland’s highest state authorities: President Andrzej Duda and his wife, Prime Minister Beata Szydło, Speaker of the Sejm Marek Kuchciński, Speaker of the Senate Stanisław Karczewski, and MPs. Among the hundreds of thousands of the faithful, there were delegations from each Polish diocese, numerous parish groups, as well as individual pilgrims, including many families with young children. The Eucharist was concelebrated by around 1000 priests, including 150 bishops. Directly by the pope, there were the President of the Polish Episcopal Conference, Abp Stanisław Gądecki, Metropolitan of Czestochowa Abp Wacław Depo, Poland’s Primate Abp Wojciech Polak, and Apostolic Nuncio Abp Celestino Migliore.

Message to the Nation

In his homily, the Holy Father stressed that bearing in mind the gift of a millennium so filled with faith, we do well before all else to thank God for having walked with our nation, having taken us by the hand and accompanied us in so many situations. The pope also recalled that everything about God’s way of acting is concrete. “The eternal is communicated by spending time with people and in concrete situations,” said the pope. He also recalled the protection the Queen of Poland provides to our nation. “In particular, you have been able to touch with your hand the real and provident tenderness of the Mother of all, whom I have come here as a pilgrim to venerate and whom we have acclaimed in the Psalm as the ‘great pride of our nation’,” explained the Successor of St. Peter. These words were followed by thunderous applause.

The Holy Father also emphasized that God comes into the world in littleness and humility. “The Lord does not keep His distance, but is near and real. He is in our midst and He takes care of us, without making decisions in our place and without troubling Himself with issues of power,” said the pope. “He prefers to let himself be contained in little things, unlike we who always want to possess something greater,” he observed, adding that these are the little ones who speak His own language, that of the humble love that brings freedom.

The Eucharist ended with concluding words by Archbishop Wojciech Polak, the Primate of Poland, who pointed out that the thanksgiving Mass celebrated the day before had a special dimension. “We are returning to Poland’s baptism, to the history of salvation, which has been shaping this land for 1050 years now, to the origins of the Christian vocation of each and every one of us. We look with gratitude at the stage of the road we are on today, led by the merciful Lord. We entrust ourselves to Him completely and we want to take next steps to which He invites us, faithful to God, to the Cross, the Gospel and the Church,” he said. Poland’s Primate recalled that 50 years ago, Paul VI was not given the chance to personally take part in the celebrations of the Millennium of Poland’s baptism. He thanked Pope Francis for his pilgrimage to our country.

After the Mass, Pope Francis went to the Knights Hall, where he met with the hosts of Jasna Gora, Pauline Fathers. Just before 1:00pm, he left for Krakow in a helicopter.