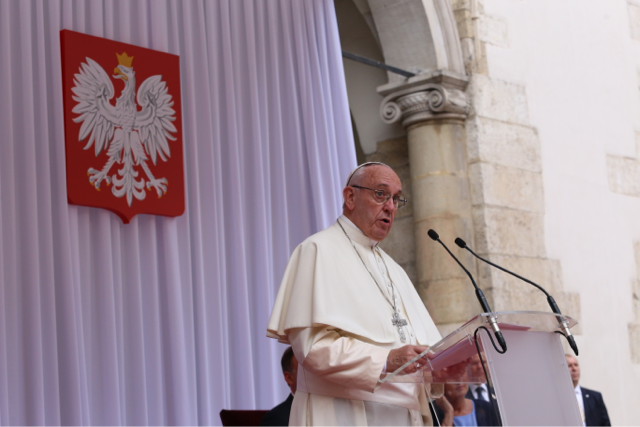 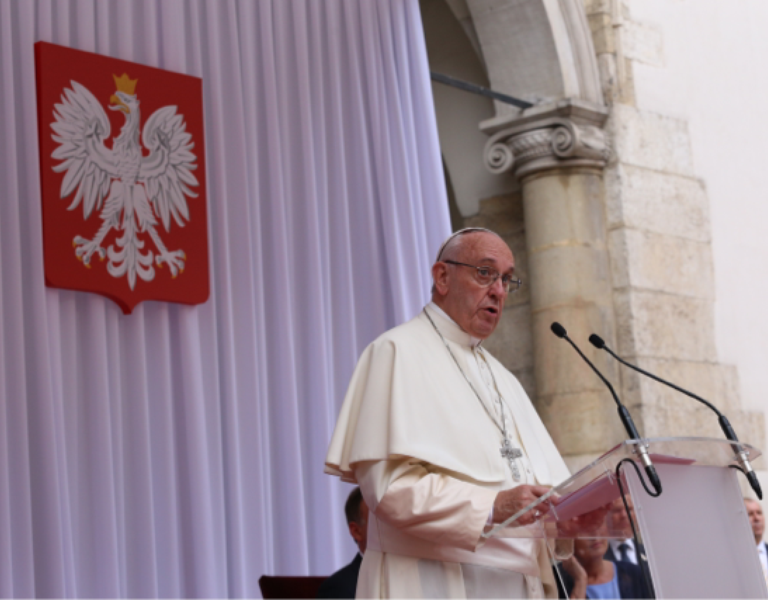 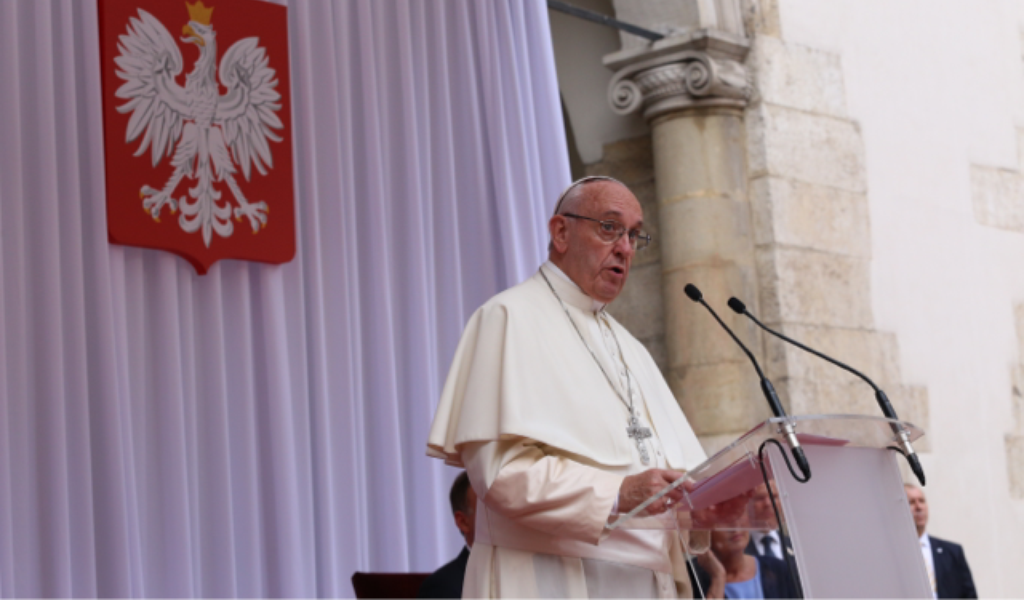 Pope Francis arrived at the Wawel Castle on Wednesday, where an official ceremony took place to celebrate his arrival in Poland. The Holy Father was welcomed by President Andrzej Duda in the name of the Republic of Poland and Poles.

He said that it is incredible for Poland that this “great event – an event of joy, an event of the heart, and above all a spiritual event, is taking place in Krakow – in the city of St. John Paul II”.

Addressing Pope Francis, the president said that when Pope John Paul II made his first pilgrimage to Poland in 1979, he spoke “famous words” in Warsaw, “which entered the hearts of all Poles”.

“He said ‘may Your Spirit emerge and renew the face of this land’. And this is what happened. In 1989 and later, the face of Poland was renewed through political change, through the departure of a leadership that was hostile to the Catholic Church and faith, which often persecuted people of the faith, persecuted priests and killed them. We managed to overthrow this leadership and Poles regained their freedom,” the president said.

“Looking at the world today one wants to shout out: may Your Spirit emerge and renew this land, not only the land of Poland but all lands, this is how much they today need values, faith, good, that is everything that Your Holiness carries within you,” Duda said. He added that the young people who have come to World Youth Day, as well as all Poles, are eager to hear the Pope’s words.

Pope Francis: I am happy to be starting in Poland

This is my first visit to Central-Eastern Europe and I am happy to begin with Poland, the homeland of the unforgettable Saint John Paul II, originator and promoter of the World Youth Days, Pope Francis said on Wednesday at the start of his address in the Wawel.

Pope Francis reminded that John Paul liked to speak of a Europe that breathes with two lungs – an eastern and a western lung. He stressed that Europe’s new humanism is a harmony of the West and East.

“The ideal of a new European humanism is inspired by the creative and coordinated breathing of these two lungs, together with the shared civilization that has its deepest roots in Christianity,” the Pope said while addressing representatives of national authorizes, Church officials, university deans and members of the diplomatic corps at the courtyard of the Wawel Royal Castle.

Pope Francis: memory – a hallmark of the Polish nation

“Memory is the hallmark of the Polish people. I was always impressed by Pope John Paul’s vivid sense of history. Whenever he spoke about a people, he started from its history, in order to bring out its wealth of humanity and spirituality,” Pope Francis said.

“A consciousness of one’s own identity, free of any pretensions to superiority, is indispensable for establishing a national community on the foundation of its human, social, political, economic and religious heritage, and thus inspiring social life and culture in a spirit of constant fidelity to tradition and, at the same time, openness to renewal and the future,” the Pope said during his speech on Wednesday in the courtyard of the Wawel Royal Castle.

He said that our country recently marked the 1050th anniversary of the Baptism of Poland. “That was indeed a powerful moment of national unity, which reaffirmed that harmony, even amid a diversity of opinions, is the sure path to achieving the common good of the entire Polish people,” Pope Francis said.

He added that fruitful cooperation in the international sphere and mutual esteem grow through awareness of, and respect for, one’s own identity and that of others. “Dialogue cannot exist unless each party starts out from its own identity,” the Pope said.

“In the daily life of each individual and society, though, there are two kinds of memory: good and bad, positive and negative. Good memory is what the Bible shows us in the Magnificat, the canticle of Mary, who praises the Lord and his saving works. Negative memory, on the other hand, keeps the mind and heart obsessively fixed on evil, especially the wrongs committed by others,” the Pope said.

He stressed that, looking at Polish history, “Poles have been able to let good memory have the upper hand, for example, by celebrating the fiftieth anniversary of the forgiveness mutually offered and accepted between the Polish and German episcopates, following the Second World War”.

“That initiative, which initially involved the ecclesial communities, also sparked an irreversible social, political, cultural and religious process that changed the history of relationships between the two peoples,” Pope Francis said.

He also referred to the Joint Declaration between the Catholic Church in Poland and the Orthodox Church of Moscow. He said this was an act that inaugurated a process of rapprochement and fraternity not only between the two Churches, but also between the two peoples.

“The noble Polish nation has thus shown how one can nurture good memory while leaving the bad behind,” he said.

Also needed is a spirit of readiness to welcome those fleeing from wars and hunger, and solidarity with those deprived of their fundamental rights, including the right to profess one’s faith in freedom and safety, the Pope said on Wednesday.

“There is a need to seek out the reasons for emigration from Poland and to facilitate the return of all those wishing to repatriate. Also needed is a spirit of readiness to welcome those fleeing from wars and hunger, and solidarity with those deprived of their fundamental rights, including the right to profess one’s faith in freedom and safety,” Pope Francis said.

He said that exchange and cooperation needs to be developed on the international level in order to resolve the conflicts and wars that force so many people to leave their homes and their native lands.

“This means doing everything possible to alleviate the suffering while tirelessly working with wisdom and constancy for justice and peace, bearing witness in practice to human and Christian values,” Francis stressed.

Life must be protected from conception to natural death

“Life must always be welcomed and protected. These two things go together – welcome and protection, from conception to natural death. All of us are called to respect life and care for it,” the Pope said.

He added that “on the other hand, it is the responsibility of the State, the Church and society to accompany and concretely help all those who find themselves in serious difficulty, so that a child will never be seen as a burden but as a gift, and those who are most vulnerable and poor will not be abandoned”.

The Pope said that social policies in support of the family, the primary and fundamental cell of society, assisting underprivileged and poor families, and helping responsibly to welcome life, will thus prove even more effective.

“In the light of its thousand-year history, I invite the Polish nation to look with hope to the future and the issues before it,” Pope Francis said, adding that such an approach will favour a climate of respect between all elements of society.

Poland can count on the cooperation of the Catholic Church, Francis declared. He wished the president and everyone present in the Wawel “a serene and fruitful service of the common good.”