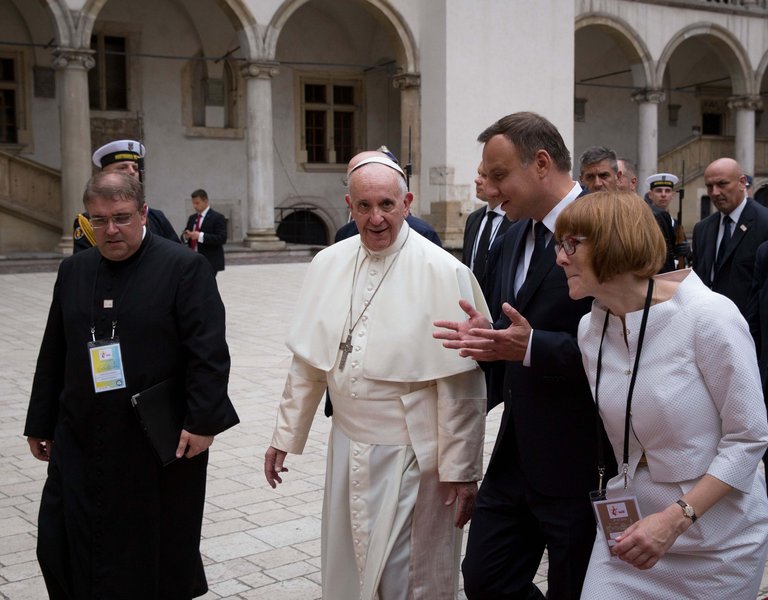 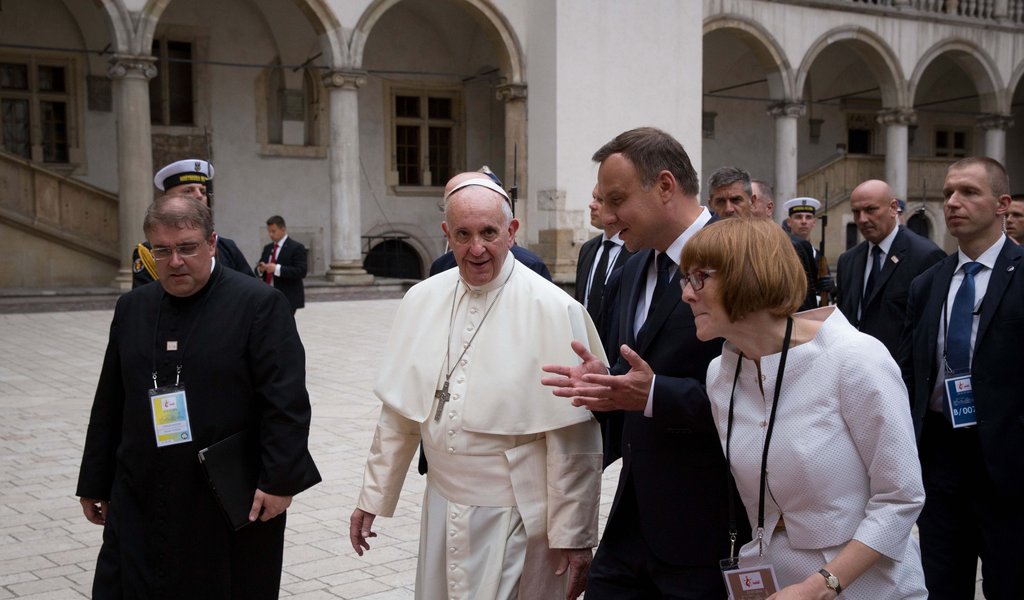 Pope Francis thanks Poland for its hospitality

Holy Father Francis concluded his first five-day pilgrimage to Poland on Sunday, 31 July. The Pope’s visit to Poland was in large part connected to the World Youth Day event held in the country, however the Holy Father also held numerous other meetings with high-ranking state officials in addition to visiting Jasna Gora and the former German concentration camp Auschwitz-Birkenau.

Pope Francis arrived in Poland on 27 July. After being greeted at the airport by the President of the Republic of Poland Andrzej Duda, the First Lady, Cardinal Stanislaw Dziwisz as well as leading state and Church officials, the Holy Father made his way to the Wawel, where an official welcoming ceremony took place.

In his Wawel speech, Pope Francis expressed his joy that his first visit to Central-Eastern Europe takes place in Poland, “whose son is the unforgotten St. John Paul II, the initiator and promoter of World Youth Day”.

After the official welcome, Pope Francis held a private meeting with President Andrzej Duda and his wife. At the same time, Prime Minister Beata Szydlo and Foreign Minister Witold Waszczykowski met with the Holy See’s Secretary of State, Cardinal Pietro Parolin. Poland’s head of government said that their talk touched on “modern challenges facing the world” and the need for values in the world.

On Thursday, 28 July, Pope Francis left for Czestochowa where he gave a homily at the Shrine of Our Lady of Czestochowa in Jasna Gora during Holy Mass held as a thanksgiving for the Baptism of Poland, the 1050th anniversary of which falls this year.

During his homily, the Holy Father spoke about Poland’s history. He stressed that it was “shaped by the Gospel, the Cross and fidelity to the Church and has seen the contagious power of a genuine faith, passed down from family to family, from fathers to sons and above all from mothers and grandmothers, whom we need so much to thank.  In particular, you have been able to touch with your hand the real and provident tenderness of the Mother of all, whom I have come here as a pilgrim to venerate and whom we have acclaimed in the Psalm as the ‘great pride of our nation’,” he said to the gathering. These words were greeted with loud applause. The official liturgy was preceded by the singing of “Bogurodzica”, Poland’s oldest hymn dating back to the origins of Christianity in Poland. At the time, it was regarded as the national anthem, in the modern understanding of the term.

The Mass celebrated on the field altar of the monastery shafts was attended by high-ranking state officials, including President Andrzej Duda, Prime Minister Beata Szydlo as well as Foreign Minister Witold Waszczykowski. After his return to Krakow, the Pope went to Blonia fields, where a welcome ceremony for His Holiness was held by youths.

On Friday morning, Pope Francis visited the former German concentration camp Auschwitz-Birkenau. The Holy Father walked through the camp’s main gate that still bears the original “Arbeit macht frei” sign, as did his predecessors, Benedict XVI and John Paul II, did before him. Francis lit a candle and prayed at the Wall of Deat

During his visit, Pope Francis also prayed in the starvation cell of Father Maksymilian Kolbe, who 75 years ago sacrificed his life for his fellow inmate. The Holy Father then entered the courtyard of Block 11 where he met and talked to a dozen former inmates. The Pope was accompanied on his visit to Auschwitz by Prime Minister Beata Szydlo.

Around one thousand people attended the ceremony, which was held in silence. Among them were former Auschwitz survivors as well as individuals recognized as Righteous Among the Nations or their relatives. Upon his return to Krakow, Francis visited the University Paediatric Hospital in Prokocim, where he met with sick children. On Friday evening, the Holy Father led young people in the Way of the Cross prayer in Krakow’s Blonia fields.

Liturgy of Penance in Krakow’s Łagiewniki

On Saturday, Francis travelled to Krakow’s Łagiewniki where he took part in the Liturgy of Penance together with young people. After the liturgy, the Pope led Holy Mass in the St. John Paul II Sanctuary, dedicated to priests, nuns, monks, consecrated persons and seminarians from Poland.

On his last evening in Poland, the Pope went to the Krakow suburb of Brzegi to hold a prayer vigil with young people in Campus Misericordiae.

Accompanied by people representing all continents, the Pope started the vigil by going to “Section 0”, which was close to the altar and the Gate of Mercy. Passing through the Gate was connected to the on-going Jubilee of Mercy. Conversion, addiction, suffering of young people caused by conflict, issues relating to forgiveness and loneliness in the technically advanced world were among the main topics of the Pope’s prayer vigil held with young people.

The Campus Misericordiae mass held in Brzegi was the culmination of the fifth and final day of Francis’ visit to Poland. The Mass was attended by high-ranking state officials, including President Andrzej Duda, Prime Minister Beata Szydlo, Deputy Speaker of Parliament Ryszard Terlecki, the Head of the Prime Minister’s Chancellery Beata Kempa as well as Foreign Minister Witold Waszczykowski, Defence Minister Antoni Macierewicz and the Minister of Interior and Administration Mariusz Blaszczak.

Pope Francis thanked everyone who took part in and helped out during World Youth Day. “A big thanks goes to you, dear young people. You filled Krakow with your enthusiasm and your faith, which you spread to others,” he said.

The Pope thanked Archbishop of Krakow Cardinal Stanislaw Dziwisz and the President of the Pontifical Council for the Laity, Stanislaw Rylko, for their words and for helping organize World Youth Day. He also thanked everyone who played a role in organizing the event and who helped make it a success.

After concluding the Angelus prayer, Pope Francis announced that the next World Youth Day would take place in Panama in 2019. According to various estimates, between 1.5 million and 2 million people attended Campus Misericordiae in Brzegi on Sunday.

After 12 o’clock, Pople Francis left Campus Misericordiae in Brzegi and made his way to the Archbishop’s Palace in Krakow where he had a scheduled lunch with the papal envoy. After the lunch in the Krakow curia and a meeting with the Minister of Interior and Administration Mariusz Blaszczak, during which the Pope thanked all officials tasked with guaranteeing security during WYD, Francis appeared briefly at the papal window. He gave his blessings to everyone and asked people not to forget to pray for him as well.

“I thank you for the very warm welcome that I have received these past few days,” he said.

After biding farewell to staff at the Krakow curia, Francis set out to meet with WYD volunteers, helpers and the event’s Organising Committee at Krakow’s Tauron Arena. During the meeting, the Pope told youths that memory and courage were the two conditions needed to make them the “hope for the future”. His advise to the young people was to be brave and to talk as much as possible to their elders with the aim of gaining their wisdom.

At 18.00 Pope Francis left the Tauron Arena and made his way to Balice Airport, where he met President Andrzej Duda before his flight to Rome. The sending-off ceremony at the airport was attended by Prime Minister Beata Szydlo, members of her government and Cardinal Stanislaw Dziwisz in addition to the President and the First Lady. Also in attendance was an Honour Guard of the Polish Armed Forces.

“At this time, as I leave Poland on my way back to Rome, I want to express my deep gratitude to His Excellency and the whole Polish nation for its noble welcome and its hospitality,” the Pope wrote in a note addressing the Polish President which was sent at the time of his departure.