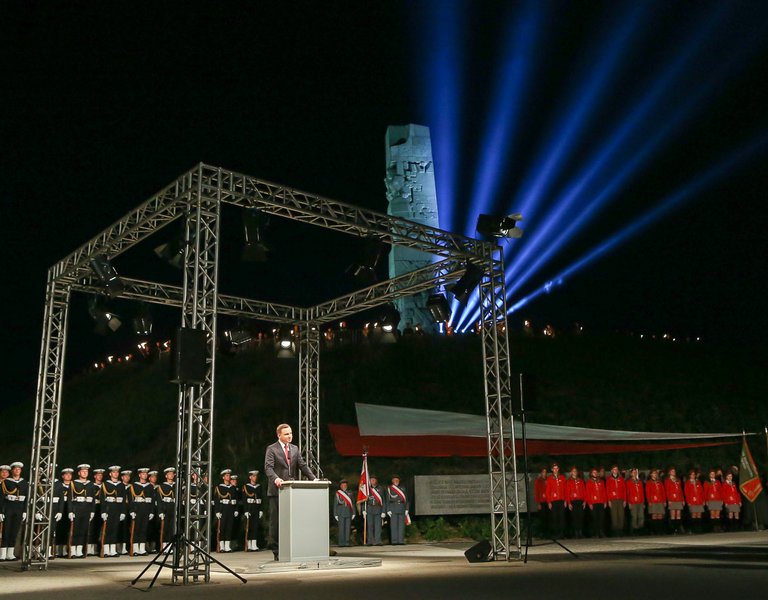 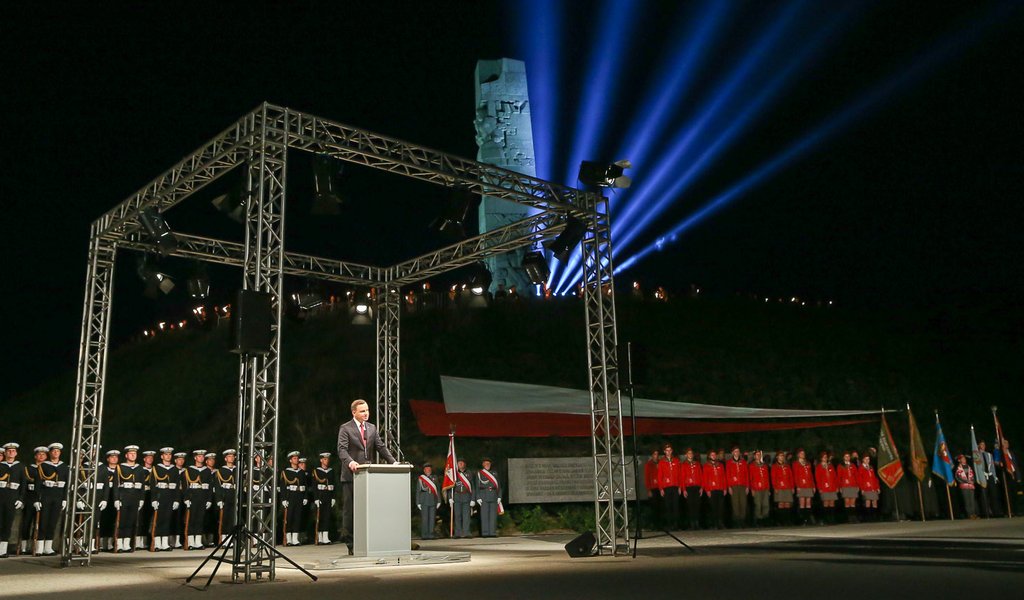 The observances traditionally began at 4:45 am, the exact time at which on September 1, 1939 the Germans attacked a military transit depot on the peninsula, beginning the Second World War.

Recalling Westerplatte's heroic seven-day defence against overwhelming German forces by a small Polish military detachment, Andrzej Duda called it "an act of great heroism". He especially commended the detachment's commander Henryk Sucharski and reminded that the Poles were expected to hold out for several hours but in fact managed to defend Westerplatte for seven days.

"This was an act of great heroism, this was the pure heroism and unyieldingness of Polish soldiers defending their country. According to plan, they were to hold out for several hours, they held out for a week", the president said.

President Duda stressed that the Westerplatte observances were a tribute to all WW2 victims, among them 5.8 million Poles, and said that everything had to be done to prevent this from happening again.

"Today we must do everything, also in cooperation with our allies, to prevent such a situation from ever touching our country, our people or our neighbours", the president said.

In this context Duda also warned against the revival of imperial ambitions in Europe and criticised attempts to infringe on the freedom of countries and violate state borders. "We must not allow imperial ambitions to revive in Europe, we cannot close our eyes to the infringement of the freedom of others and the forced moving of European frontiers", the president said.

Before the ceremony the president and defence minister laid flowers at Westerplatte's Soldiers of the Polish Armed Forces Cemetery.

The Battle of Westerplatte was the first battle in Germany's invasion of Poland and marked the outbreak of the Second World War in Europe. On September 1, 1939 the German battleship Schleswig-Holstein opened fire on the Polish Military Transit Depot on Westerplatte. The depot's Polish crew held out for seven days in the face of heavy attacks that included dive bombings.

The September 1, 1939 bombing of Wielun by the German Luftwaffe launched at 4:40 am, five minutes before the shelling of Westerplatte. One of the first air raids of the war, it killed an estimated 1,200-2,000 civilians, injured hundreds more, and destroyed most of the town's centre. There were no military targets of any importance in the area, which is why the bombings are considered an act of intimidation against the civilian population. At the time of the attack Wielun was situated 21 km from the German Poland. 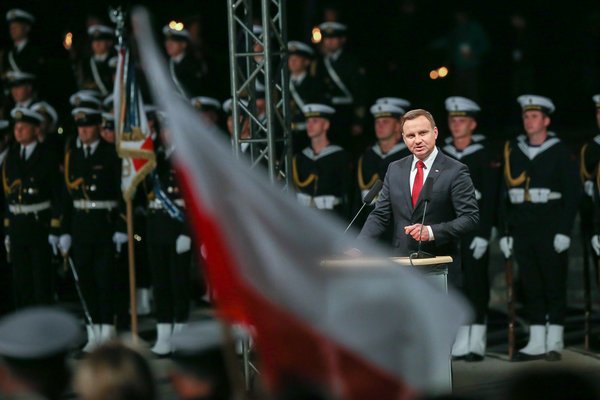 The first artillery volley came at 4.48am, from 11 guns on the Schleswig-Holstein battleship.

This treacherous volley from the battleship, which had arrived in Gdansk as a guest, marked the beginning of World War II, President Andrzej Duda said during his speech at Westerplatte.

The start of the Second World War as a result of the attack on the independent, free, sovereign country that was Poland, provided the first indication of what this new war would look like.

Without any warning, military units at Westerplatte were attacked while at the same German planes dropped bombs on Wielun, in doing killing hundreds of citizens, civilians in their sleep.

Above all, this was a blow to our country, a blow that would lead to an attack by another totalitarian state – Soviet totalitarianism.

Empowered by a secret agreement, Stalin’s Soviet Union attacked us on September 17th, 1939. This was an attack that the Polish army was not able to counter – we weren’t able to defend ourselves from both sides, despite the heroic acts of Polish soldiers, President Duda said.

Soldiers led by Major Sucharski and his subordinates fought their corner for seven days, under constant attack by the stronger German forces. (…) This was an act of great courage, heroism, and a display of the tenacity of the Polish soldier.

Despite wounds, death, the destruction of bunkers and trenches – the Polish soldiers fought on. “The Westerplatte defence is still standing strong!” It was thanks to this message making its way to all corners of Poland that the morale of Polish soldiers was kept high.

We bow our heads to them! (…) The memory of their heroic deeds, of their courage in defending the Polish coast, including those who defended Hel, will remain forever etched in our history and our hearts.

And although they did not come out victorious, although Poland would yet again be wiped off the map by Nazi Germany and the USSR, although the country was under occupation, today and in the years prior Poles have been proud of its heroes. (…)

From where we stand today, Gdansk is a great symbol.

It was here that our freedom was viciously taken away from us in 1939.

But it was also here that freedom returned, through the “Solidarnosc” movement which was created one day before the anniversary of the Second World War.

This was a journey to freedom, thanks to which we now live in a free, sovereign country.

Giving thanks to the heroes of that time, bowing our heads to them in honour, we should always think of Westerplatte, about our Polish state, and return to words spoken here during two great speeches: the first, voiced by the Holy Father even before we had won back our freedom and sovereignty, addressing young people: “Each one of you, young friends, has your own Westerplatte”.

These words carry great spiritual weight, as there are a lot of Westerplattes for us to defend.

They are part of the history of our Christian nation. These are patriotic values, the readiness to stand in defence of our homeland.

These values were held dearly by the defenders of Westerplatte, Hel, and those who fought in Kock, in Bzura, in the Warsaw Upring, in Monte Cassino, on all fronts of the Second World War, by the Cursed Soldiers, by all those who would stand in defence of their homeland – workers, working people.

We must protect these values and pass them on to young people. We cannot let them be taken away from us.

In this spirit, let me draw on a second great speech, a speech given by President Lech Kaczynski in 2009. He said two important things, which relate to history and modernity.

He said that we must never show weakness to any form of totalitarianism or imperialism. Because weakness leads to war, indecision – 70 million victims, if not more; this is something that not only we should remember but all humankind, above all politicians.

He also said that we, as Poles, have no reason to have any complexes, we do not have to take lessons in humility, because even if our freedom was taken away from us we still stood on the side of the free world – our state did not collaborate and we did not agree to having a government imposed on us from the East.

There were always Poles who said “no”. Towards the end of the 1980s the Solidarnosc movement tore down the Iron Curtain. (…) We were a model for others and as a result, the world changed, President Duda stressed.

Today we have to do everything we can in order to make sure that such a situation never again affects our country, our society, or our neighbours.

We cannot allow for these types of imperial measures to return.

We cannot turn a blind eye when a country’s freedom is taken away or when its borders are moved.

We cannot agree to an alliance of powers that pillages the weak.

I once again pay tribute to heroes and thank all of you here today that we have met here on this September 1st morning, on the 77th anniversary of the treacherous attack on Poland marking the start of the Second World War.

I bow my head to the soldiers who are ready at any time to defend our homeland. (..)

Honour and glory to the heroes and to the eternal memory of the fallen!, Andrzej Duda concluded.