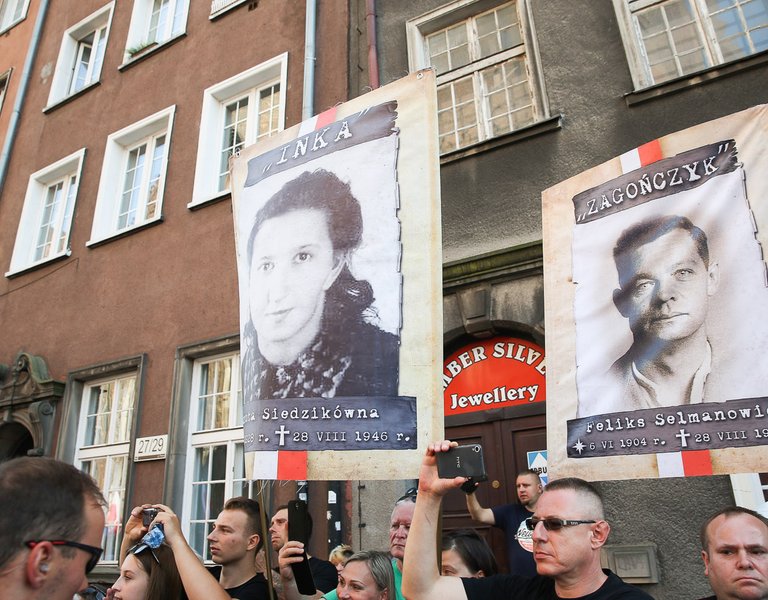 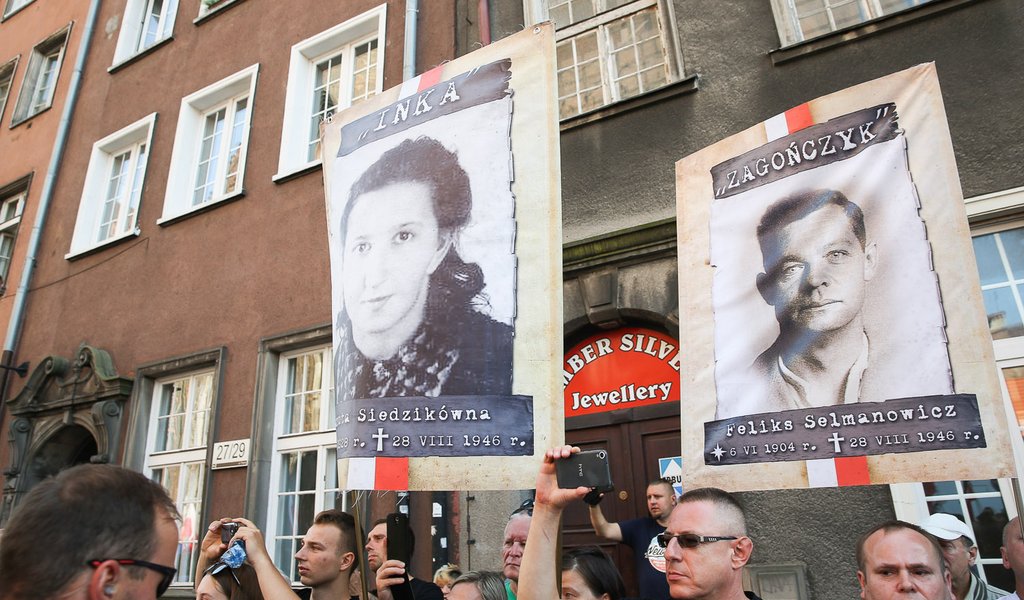 You have waited a long time, Poland

“What the Polish state is now doing for its heroes is making amends through a patriotic manifestation. Through this funeral we are restoring dignity to the Polish state,” President Andrzej Duda said during the funeral of Danuta Siedzikówna (also known as “Inka”) and Feliks Selmanowicz (“Zagończyk”) in Gdansk.

Thousands of people gathered yesterday to pay respects to these two incredible anti-communist underground fighters: the orderly attached to the 5th Wilno Infantry Brigade and the commander of the 2nd Company of the 4th Wilno Infantry Brigade of the Home Army. They were promoted posthumously by President Andrzej Duda on the initiative of Minister of Defence Antoni Macierewicz: Danuta Siedzikówna to the rank of Lieutenant while Feliks Selmanowicz, “Zagończyk”, was made a Lieutenant Colonel. “Zagończyk” was also awarded with an Officer's Cross of the Order of the Rebirth of Polish. Those gathered inside and outside the church burst into applause, chanting: “"Honour and glory to the heroes".

Taken out of the death pits of Garrison cemetery in Gdansk by a team led by Prof. Krzysztof Szwagrzyk almost 70 years after their execution, they were finally put to rest with the dignity they deserve by the Polish Army and the Polish state, represented by President Andrzej Duda.

Also in attendance at the state funeral were Prime Minister Beata Szydlo and ministers, parliamentarians, military officials, bishops and priests, army veterans, scouts, relatives of the two heroic soldiers murdered on 28 August 1946 in Kurkow prison in Gdansk, as well as numerous Polish citizens.

“My great-grandfather was a national hero, this is something that is very important to me. His son, my grandfather, used to say that Zagończyk was man who would do anything to protect his family and his homeland,” said Mariusz Budzinski, the great-grandson of Feliks Selmanowicz. “These type of people, regardless of the situation, always did the right thing, even in times of war,” he adds. In honour of his great-grandfather, Mariusz named his son, who was born in February, Feliks. When he is older, he wants his son to find out the history behind his name so that he is aware of the values rooted in it. So that the he will share these values with those around him.

“The state funeral of my great-grandfather is a culmination of a whole sequence of events which started with the search for the Cursed Soldiers. We can now finally close this chapter and my great-grandfather finally has his own grave beside which candles can be lit and prayers spoken,” Budzinski said. “It was very touching that the president and the highest state officials took part in his funeral,” he said.

A shout louder than death

The funeral ceremony started with Holy Mass led by Archbishop Sławoj Leszek Głódz in the Church of St. Mary. The Archbishop of Gdansk stressed in his homily that the last words – “Long live Poland!” – shouted out by “Inka” and “Zagończyk” before they were killed have not been silenced, they live on in our hearts. They constitute a powerful symbol of their greatness and courage, as well as their sacrifice and love for their homeland. “It is he who brought to us today the President of the Republic of Poland. He called on all of us, so that we stand here today. In the name of Poland, which did not die. It lives! Free and independent! A Poland that remembers. Finally, remembers. About the sons and daughters of our nation. About those who gave their lives for their nation,” the Archbishop said.

The Archbishop of Gdansk reminded that after they were killed, the soldiers were branded by propaganda as bandits, traitors to their homeland as well as reactionary cronies. And, he said, efforts to manipulate history did not end in 1989. They lasted longer, although not as aggressively, or as cynically. “It has weighed down on recent decades. On the process of cleansing historical memory of lies as well as ideological and political manipulations,” the Archbishop said.

The president voiced this sentiment in his speech. “The regime that ruled until 1989 was the same traitorous regime that murdered Inka and Zagończyk. The leadership that followed was, in theory, different. So how is it that we have had to wait 27 years for this funeral?” Andrzej Duda asked rhetorically.

The homily recalled words that “Inka” wrote down in a secret message from prison: “I behaved as I should have”. The Archbishop pointed out that the words constitute “a certain order of truth and values that need to be ‘preserved’ and ‘defended’. For oneself and for others”. They are: the Catholic faith, national identity and love for one’s homeland.

Poland is paying off a debt

The president thanked everyone who for many years have cultivated the memory of the Cursed Soldiers in Poland and who helped bring them to the fore, most prominently Prof. Krzysztof Szwagrzyk. “Many thanks go out to doctors, geneticists, who broke the curse, that the Communists were eager to put on the Damned Soldiers. Because the biggest punishment is not remembering, erasing from memory, trampling on, hiding under the pavement, so that no one would be able to find their graves,” Andrzej Duda said. The president pointed out that there are still people who fight for the names of those who killed the underground soldiers not to be mentioned in public, who don’t want people to ask where they are buried”. “Because there exists a certain pride that is passed down to the next generation. But there is also the stigma of traitors, which is very long lasting. Today, our country’s highest officials are making sure that Poland accompanies these heroes on their last journey.  This is not only a funeral, it is above all about making amends through a patriotic manifestation, by the Polish state in honour of its heroes,” Duda said, adding that the funeral is helping Poles restore the dignity that the heroes themselves never lost. “Through this funeral, we are restoring dignity to the Polish state,” he said.

After the Eucharist during the funeral procession, an unprecedented event for the city of Gdansk, the mortal remains of Danuta Siedzikówna and Feliks Selmanowicz were brought to the Garrison cemetery and placed in a dedicated grave, “another place of national memory in our town”, according to the words of Archbishop Sławoj Leszek Głódź.

Many hours after the families of Siedzikówna and Selmanowicz and representatives of various institutes had paid their last respects, many people continued to come, placing flowers and lighting candles. Intense prayer took place.

In an interview with “Nasz Dziennik”, Prof. Krzysztof Szwagrzyk said that anyone who had the opportunity to pray at the coffins of “Inka” and “Zagończyk” in all certainty felt the same as he did – extremely touched. “The worst thing that could have befallen the Cursed Soldiers, who fought for our independence, is for us to forget them, for their sacrifices to have been made in vain. Meanwhile, the opposite is taking place. Those who died many years ago fighting for independence are today regaining their identity, regaining their names, surnames, we have taken their remains and laid them to rest with the dignity they deserve,” said the Vice President of IPN.