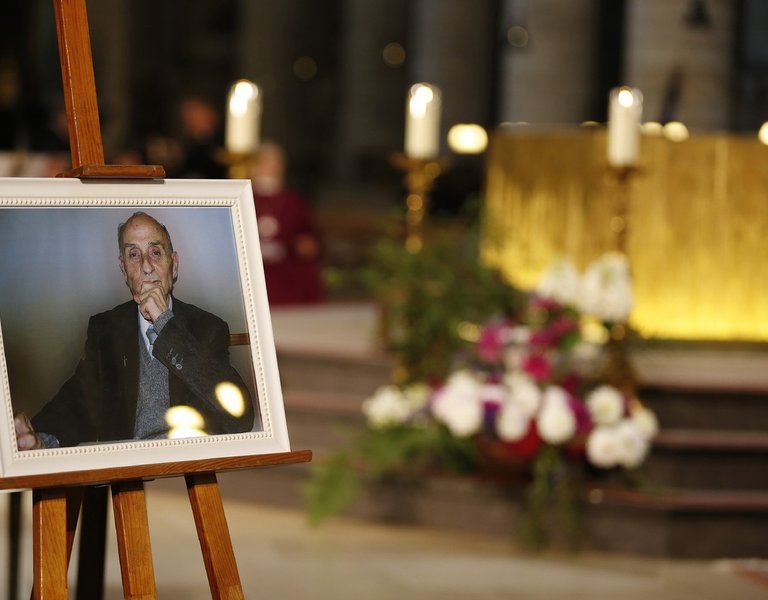 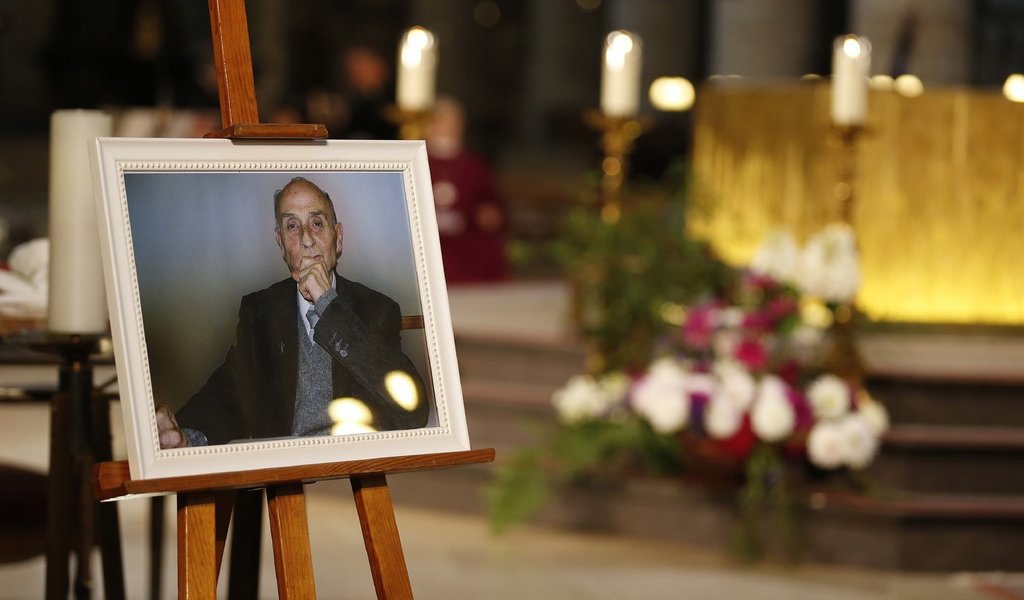 The official funeral for Jacques Hamel, the 86 year-old priest murdered by jihadists, embodied the sadness felt across France.

“Go away, Satan! Go away!” When Dominic Lebrun, the Archbishop of Rouen, repeats the last words of Father Hamel a spine-chilling sensation sweeps through Notre Dame Cathedral. Thousands of people inside the cathedral as well as assembled right outside of it listened to the words spoken by the archbishop: “Evil is a mystery. It reaches the peak of terror, contradicting our own humanity. Is this not what Father Jacques wanted to say when he shouted out his last words on this earth, just before he was stabbed to death with a knife? All of you who are captivated by demonic violence, murderous impulses, pray to the Lord for him to liberate you from the power of the devil. Let us pray for you, let us turn to Jesus, who freed those tangled in evil”.

Father Hamel was murdered at the pulpit of St. Stephen The First Martyr Church, after 58 years of service. The last time that something like this happened in France was in the 18th century, during the War in the Vendée when Catholic peasants staged an uprising against the revolutionary leadership, which had started performing acts of genocide. This was, however, the first murder committed by the so-called Islamic State (IS) in a European church. A young Frenchman of Algerian origin slit the throat of a former soldier who during the war in Algeria in the 1950s refused to be promoted to the rank of Officer because he “would have to give orders for people to be killed”. Speaking into a microphone, the voice of Roselyn, a sister of Father Hamel, trembled when she recalled this story: “At one time, he was the only person to survive a shoot-out in the oasis. He tried to understand why only he survived. Today, dear Jacques, you have the answer: The God of love and mercy chose you to serve others, to your last breath”.

The anger that followed the massacre in Nice has turned into a loss for words after the murder of the priest. Even those for whom churches are merely something that punctuate the pretty panoramas of French towns have been visibly touched. Its as if the murderers were not just looking to kill people – but also souls. Dark predictions about acts of revenge and anti-Muslim attacks within society have not played out. People want peace. Prime Minister Valls’ comments about a “religious war” were met with disapproval, with claims that statements such as these only serve to give these acts epic proportions and value to the attackers. Of course, the terrorists exploited this. On the day of the priest’s funeral, a new edition of “Dabiqa” was published – the Islamic State publication once again spewed its ideological doctrines. Terrorist organisations no longer care about responding to the bombing of Iraq or Syria, but rather the war on Christianity on European soil: “break the crosses!” The murder of Father Hamel is mainly the beginning. Some experts claim that these new propaganda efforts are testimony to the fact that the organization is losing ground, that it is the beginning of the end for IS. But can one kill souls? The question of France’s soul, its spiritual and intellectual backbone, seemed surreal on the day of Father Hamel’s funeral, when media published images of policemen brutally evicting Christians from Holy Mass held at St. Rita Church in Paris. It is true that the congregation of the small traditional Galician (French) church did not pay rent and the planned demolition of the hundred-year-old church building was legally approved. But it was a very depressing sight to see the police dragging away the devastated priest and restraining the altar boys. It was a sad image but also a high symbolic one, which says more than a thousand words about France’s spiritual health. Somewhere along this long journey, mistakes have been made. People’s anger has not been directed at the Muslim minority, but rather against the whole political class, against ideologies that are trampling on France’s soul.

Eric Frassin, a contemporary French philosopher, used the following words to justify the large-scale sexual attacks by North African immigrants on women during the New Year’s Eve celebrations in Cologne: these women are guilty of contempt for immigrants because they “embodied a form of colonialism”. Acts of revenge against them are therefore “understandable”. These perverted ideas proclaim that one should blame those who had nothing to do with colonialism and forgive those who never experienced it. These views have been advocated by intellectuals such as Pierre Bourdieu and Michel Foucault and they have been en vogue since the sexual revolution of 1968. According to their thinking, as the whole of society takes part in these power struggles, everyone is guilty and it is foolish to talk of innocent people. Everyone is to blame. The problem is that these views have been adopted by a number of people of African origin who now see themselves as eternal victims, rather than the masters of their own destiny. This carte blanche justifying all forms of grudges and a post-modernist dilution of all values has led to the deconstruction of society as a “community with soul”. By marginalizing and ridiculing Christianity, society has gone off course.

Two weeks after the Nice massacre, another mosque was opened in the city –a big, steel-glass building built by Saudi money. One of the most openly anti-Christian countries in the world, a sponsor of terrorism, it has imposed its twisted version of Islam on society with the approval of the state. After the attack on St. Stephen’s Church, Prime Minister Valls loudly stated that it was “important to rethink our relations with French Islam”; ban, at least temporarily, foreign funding for mosques and find credible partners. But how can this be done when one is dealing with numerous – sometimes contradictory – strands with both imams and the faithful coming from diverse countries without one central hierarchy? What should be done about with the ingrown culture of guilt that called for the future murderer of the priest to be released from prison because he was “harmed by destiny”. How are we to protect ourselves from all the insanity when the state’s immigration policies appear themselves to be insane?

No one in their rightful mind wants a civil or a religious war. Can one in fact talk of a religious war when only 5 per cent of French society goes to church regularly? Forced secularization has also rubbed off on Muslims – according to surveys, between 30-40 per cent of Muslims practice their faith. But what have they received in return? It appears that none of the French terrorists was religious. They were either criminals or restless youth who suddenly felt the urge to go down a “heroic” or “spiritual” path and make history, no matter how cruel they have to be to achieve this. They hoped that this would give their lives meaning and fill the spiritual emptiness that they have within them.

Challenging fundamentalists from the so-called Islamic State to “religious war” may appear to weary French Catholics to be merely a continuation of the war against European Christianity, which has been on-going for many years and is home-grown. Many experts are starting to worry. Frequent attacks on Pope Francis in “Dabiqa” stating that the Holy Father is “trying to paint a warm image of friendship, distracting the Muslim masses from the obligation of Jihad” is based on the writings of…Pope Benedict XVI. The Jihadist journal quotes the publication by Joseph Ratzinger entitled “Faith, Truth and Tolerance”: “Democracy contradicts the fundaments of Islam, which simply does not distinguish between the political and spiritual spheres, unlike Christianity which has done so from the very start”. “Even if he is a liar, he is telling the truth on this issue,” the Jihadists said.

And here in lies the rub. France and other European countries in which the extent of Muslim immigration has hampered assimilation efforts, will have to base relations with this part of society according to this criteria – in order to guarantee a peaceful life and coexistence. If they fail to recognize fundamental parts of political and cultural life in Europe, then this prove to be very difficult.