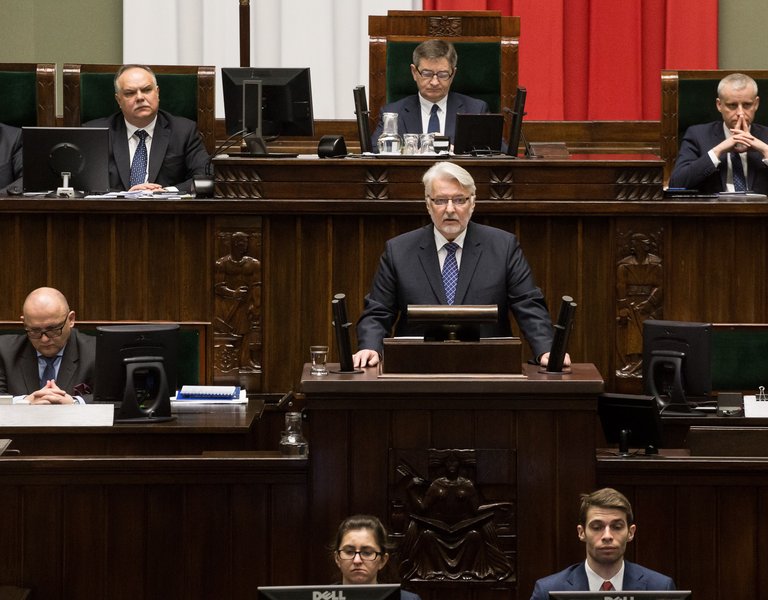 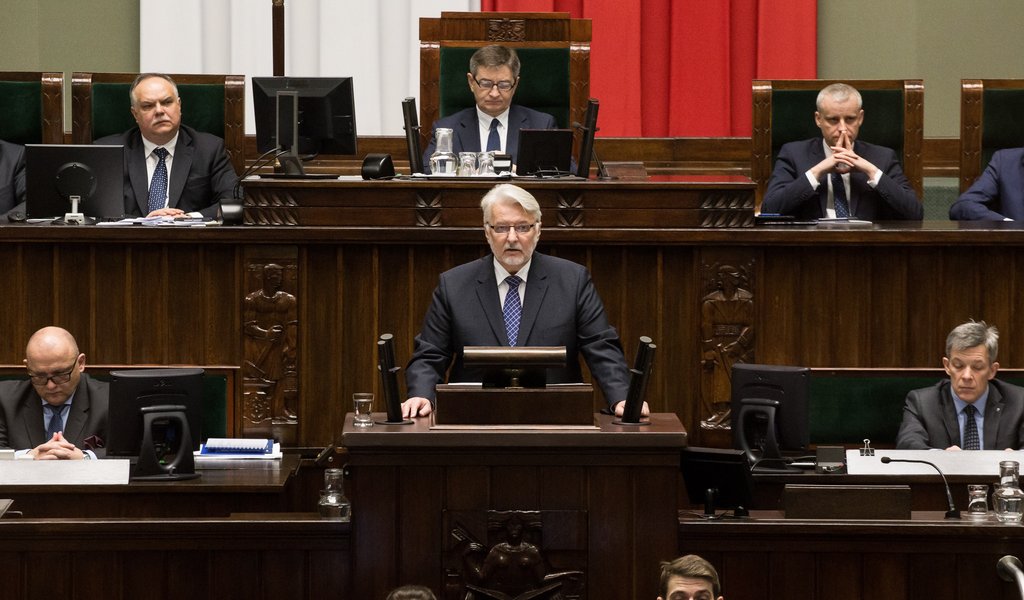 When a year ago I joined the Ministry of Foreign Affairs as an advisor and gained additional insight by means of access to internal newsletters, information about meetings at home and abroad, the content of statements given to foreign media outlets – I was shocked by the discrepancy between what I saw and heard and how the MFA is portrayed in the media.

Both liberals and conservative echo what the left is saying. Usually, assessment of the ruling party, for example of the team of Theresa May or Donald Trump, is covered differently by conservatives and liberals – here the “mug” applied to the MFA by "Gazeta Wyborcza" is mirrored in the press that generally well-meaningly observes the actions of the government.

The pinnacle of thoughtlessness was achieved by two jokers from a conservative weekly who, it was obvious to see, forfeited the use of reliable sources and instead chose to source their information from the city rumour mill, no less from the area of Czerska Street. Their scribbles are more reminiscent of the Polish "Pudelek" gossip portal than the British left-wing satirical magazine "Private Eye", which at least sticks to the facts and can at times be amusing.

Enemy fire aimed at the Foreign Ministry began immediately after the parliamentary elections in 2015. As the re-set of Polish foreign policy gained steam, as it became more effective, the more furious the attacks became.

Even the perfectly organized NATO Summit – I was there, I saw it with my own eyes – and the sensible bilateral relations with the United Kingdom, the pragmatic policy towards the new administration in Washington, the rational speeches given in Brussels, in the United Nations, the partnerships with France and Germany – the better things get, the worse the attacks become.

Observing these two completely incompatible depictions of the Ministry of Foreign Affairs, the actual facts on the ground and the image created by the left-wing media, it's hard not to think about opinion-shaping agencies. After all, opinion-shaping agencies are not just the figment of imagination of writers such as Grisham and Le Carre! And we all know that Graham Greene and John Le Carre wrote their novels based on their experiences working with the MI6 and MI5, the British intelligence and counterintelligence agencies.

From the expose provided by the head of Polish diplomacy, Poles learned what I observe every day. Countless meetings with the heads of state, of Germany, France, the United Kingdom, China, India, Canada, Singapore – with Germany alone there were 5 meetings at the presidential level, 3 at the head of government level in addition to constant contact between the foreign ministers. The well-organized NATO summit and the fast implementation of its decisions, the strengthening of the Eastern Flank. The awakening after many years of the lethargic Colossus and making him aware of the new threats and the need for action. The revival of the transatlantic relationship and convincing the new Trump administration of the reality of the dangers flowing from the imperial ambitions of Russia. Enforcement of the partnerships in Berlin and in Paris and trying to articulate our interests as well as the need to reform the European Union.

Step by step we are moving forward, with difficulty and toil, with constant obstacles being put in our way by the “total opposition”, thoughtless and discredited, who have no idea about how do shape foreign policy. The British left-wing opposition led by the hippie-gingerbread Jeremy Corbyn is pathetic and unelectable, basically amoeba, the lowest intellectual strata – whilst those in Warsaw are even lower. I just watched an interested series on Planeta+ called “Ushuaia”. In one of the episodes, a Tuareg from the Sahara said that values such as a pride and a sense of shame form the bedrock of his community. Are such concepts only valid for primitive, nomadic communities these days?

Additionally, the revival of the Visegrad Group and the use of the block’s influence as leverage in negotiations with the EU. After all, membership in the group is useful – both for the block and for the Member States, as we are already finding out. The Three Seas Initiative, the construction of transport and energy infrastructure, communications, tourism and improved energy security. Precisely, energy security – the opening of a gas terminal in Swinoujscie and the first gas deliveries from Qatar, negotiations with Norway on further diversification – after all, Polish diplomacy worked on this as well!

In his expose, the head of Polish diplomacy pointed out that "the opposition in all these years was wrong in its assessment of the international situation. Several days after Russia's invasion of Georgia, the Polish authorities invited Lavrov, and in subsequent years, despite the tensions in Ukraine, which led to war, our officials claimed that we do not face any threats.” Or, "although we spent billions to save the euro, we didn’t get to decide on anything Brussels." And finally: "we have started to recover the plane wreck six years after the disaster, in all these years the government did nothing. It was convenient for the previous government to shove the whole responsibility for the cause of the disaster on the Russians”. And now, was Witold Waszczykowski’s speech not an accurate assessment of what Polish diplomacy has been doing over past last year and in addition to what the today’s opposition has neglected during these past 27 years?

Liberal propaganda – voiced by politicians, media, former Communist-era Security Service employees, special services, opinion-shaping agencies – are trying to create an alternative image of Poland, which resembles the truth to the same extent as caricatures of Western Europe in the chronicles of the erstwhile Polish-Soviet Friendship Association.

The facts and media coverage – each for their own. Because when we look at the facts and figures, it is clear that Polish foreign policy, independent and sovereign, actually exists! Secondly, it is, finally, a genuine European democracy, in line with the interests of Poland and Polish people. Let’s be honest here, given the situation since 1945 this is a completely new and extraordinary situation. One has to admit that the new Polish foreign policy has completely changed its character. For the first time in 72 years the work of this ministry is based on a new quality, the starting point of all political, public and social activity – on axiology.

Observing political life in Poland and in the UK over many years, I always had the feeling of incompatibility with political life there and here. The impression one got was that over there policy is actually made, whilst in Poland politicians merely go through the motions. Now I know that the difference was the presence or absence of values ​​- truth as the only criterion, the priority of the national interest, people serving their nation, responsibility and the decency civil servants and social justice. Finally, I see that the way of doing politics in Poland is no different from the British way. Excuse me, it is different, in Poland one sees less political correctness, but more common sense. Also in the Ministry of Foreign Affairs.

So the support of the work of the Foreign Ministry based on axiology, and therefore selecting the appropriate priorities and strategic allies, the United States, United Kingdom and, regionally, the countries of the Visegrad Group. And a word about the UK – the opposition says that it is a strategic mistake. Excuse me? A powerful military power, still the fifth biggest economy in the world, an influential member of NATO, we need to look after the 1-million Poles scattered around the UK. It was a strategic partner of the EU, and now it will become a strategic bilateral partner. Furthermore, apart from frequent meetings at the prime minister and foreign ministers level, the Ministry of Foreign Affairs is preparing a big project in the form of the Polish-British Belvedere Forum, which could become a model for partnership with other strategic partners, with Germany, France, and perhaps the United States?

Exactly because of his prudent, values-based foreign policy today, although Germany and France never dare to admit it, Poland is setting the tone for the future of Europe: convincing the European Union about the danger posed Russia, the principle or providing assistance to refugees and victims of wars in their countries of residence, strengthening NATO and remind members of its role in the maintenance of security, pointing to the benefits from the cooperation with the UK after Brexit, the revival of the Visegrad Group as an idea for common existence in the region and, together, in the Union. After 72 years, if you allow me to quote Staff,  “we finally live in our own home,” we respect the enormous loss of lives and sacrifices made by many generations that enabled us to get here.