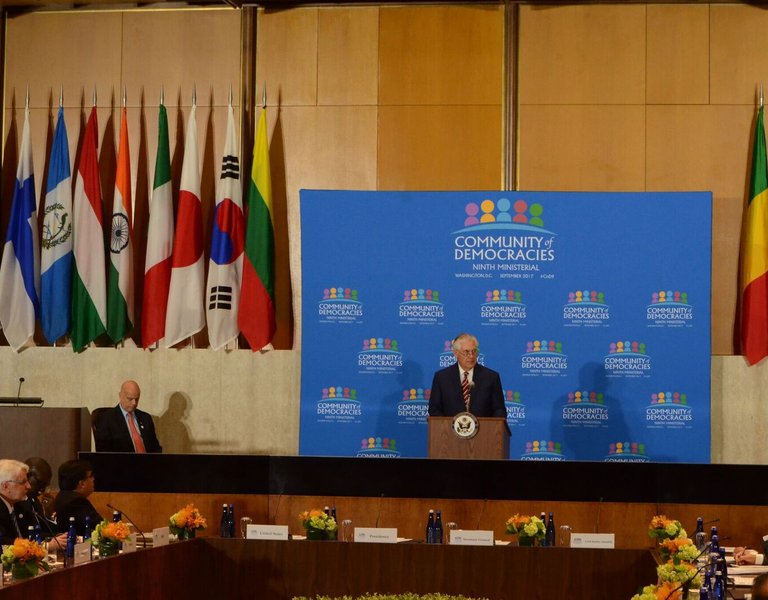 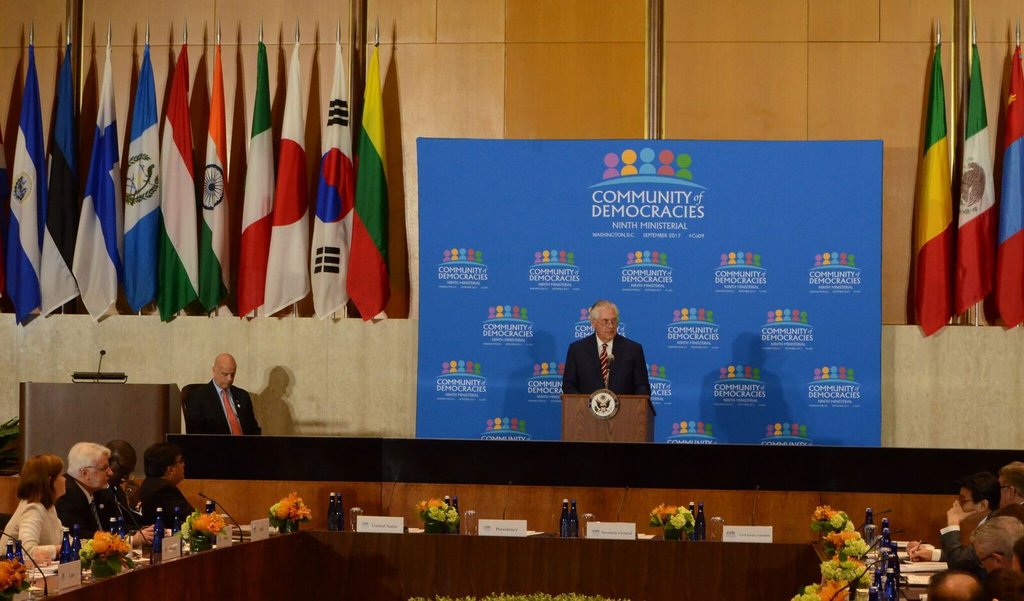 Democracy is never a finished product

When the Warsaw Declaration was adopted in 2000, many things in the world looked very different. The 21st century has brought with it events that clearly show that the end of history has not occurred and is not expected to take place in the immediate future. All the more reason why the world needs organizations such as the Community of Democracies.

The Community of Democracies is a global intergovernmental coalition of democratic countries which aims to promote democracy and strengthen democratic norms and institutions around the world. The Community was established in 2000 at a ministerial conference in Warsaw. Its authors and initiators were Professor Bronislaw Geremek, the then Minister of Foreign Affairs of Poland, and former US Secretary of State Madeleine Albright. The Community was based on the declaration titled “Towards a Community of Democracies” signed by representatives of 107 countries.

This year's ministerial conference is taking place in Washington and is a review of the US’s two-year presidency of the CoD. “Today, the United States is concluding its two year presidency the CoD. We will sum up the priorities of the presidency which include democracy and security, democracy and development as well as support and protection of civil society”, Thomas J. Garrett, Community of Democracies Secretary General, told Poland.pl. The conference will include the unveiling of the new leadership of the Community of Democracies, which will guide the organization's operations in the coming years. Poland will be among the states represented in the executive committee.

“During the ministerial, we are going to set priorities for the next two years and establish goals that we wish to accomplish in order to protect civil society and support democratic consolidation around the world,” Thomas Garrett said.

In general terms, the mission of the Community of Democracies is to support democratic transition and consolidation worldwide and help bridge the gap between principles of democracy and universal human rights and practice. In September this year, the Community of Democracies  produced a report in co-operation with the Institute for Security Studies and the Brookings Institution titled "Liberal Democracy and the Path to Peace and Security" dedicated to the new challenges that the Community will have to face in the future – corruption, propaganda, technology, the breakdown of security in the vast parts of the globe including the Middle East.

“Given these trends, the Community of Democracies has a new imperative: to demonstrate to itself and to the world that the core values of democracy and human rights are not only goods in and of themselves, but also constitute the most promising path to peace and security in an increasingly turbulent world,” we read in the report.

In addition to these challenges, Thomas Garret points to one more important task for the future of the Community of Democracies - the education of young people. “The world is going to be facing the largest generation of young people in the history. A lot of them have grown up not knowing some of the negative alternatives to democracy. We need to remind them that democracy is something worth preserving, something they need to participate in,” Garrett told Poland.pl .

Indeed, opinion polls, include those in European states with well-established democracy, often point out that young people often tend towards radical moves which do not respect democracy. “Democracies need to do a more active job and keep explaining why the world is more likely to have peace, economic development when democracy is the system that people turn to.”

On the other hand, Thomas Garrett believes that the key to improving the situation in many countries, which are hard to classify as democratic today, lies precisely in youth attitudes. “Generational changes are going to be driving a lot of transitions we see among young people in the future who are connected via social media. They understand that free societies have more opportunities for travel, for education, for jobs. Authoritarian regimes should be concerned about the large youth population. Young people expect more accountable government, more opportunities to be given to them,” the CoD Secretary General said.

The Community of Democracies helps developing countries implement good practices in building democracy and strengthening civil society. “I worked in over 100 developing countries all around the world and I can tell that what they are looking for is advice. They are looking for some country that is willing to share its mistakes and successes they made years ago and to help avoid these mistakes in young democracies,” Thomas Garrett said.

The organization provides sound advice to states going down the democratic path, but it does not issue orders to governments. “Developing nations do not need to be told what to do but they likely want to hear lessons learned and best practices. The role of CoD is to share lessons learned – it is not to say that members of the CoD are perfect,” Garrett stressed.

The work done by the Community of Democracies brings visible results in many parts of the world, including Timor-Leste. “In August I was an international election observer in Timor-Leste. One of the things that made these peaceful elections so successful was the role of the police and judiciary supporting the elections, making them transparent and in line with international standards.”

In 2004 the CoD collected lessons learned from its members and took them to Timor and shared them with local police and judges. We still see the CoD contribution made in Timor-Leste,” Garrett said.

History is happening right in front of us, the international situation today is radically different from what it was in 2000 when the Community of Democracies was formed. The September 11 attacks, the Arab Spring, the annexation of the Crimea, and Russia's aggressive politics all made their mark on the 21st century and created a feeling of uncertainty around the world. Perhaps this is not the best time for democracy, but has there ever been a perfect time?

“One of the things we have learned in the CoD over 17 years and, that I’ve seen in my other work, is that democracy is never a finished product, there is never going to be a day that we say ‘our democracy is complete.’ Democracies are always evolving and changing. We don’t have one standard that would say “this is what a democracy is”. We understand that democracies have various forms,” Garrett pointed out.

Fortunately, the changes taking place in the past few years are not just changes for the worse. “Yesterday I was with Madeleine Albright to launch our report. One of the things she noted was that prior to the year 2000 people associated Warsaw with the Warsaw Pact. Warsaw is associated with the Warsaw Declaration concerning democracy,” Garrett said.

May there be more changes such as the one which took place in Warsaw in recent years. Then the world would be a better place to live in – it is up to organizations such as the Community of Democracies to make sure that this is indeed the case. 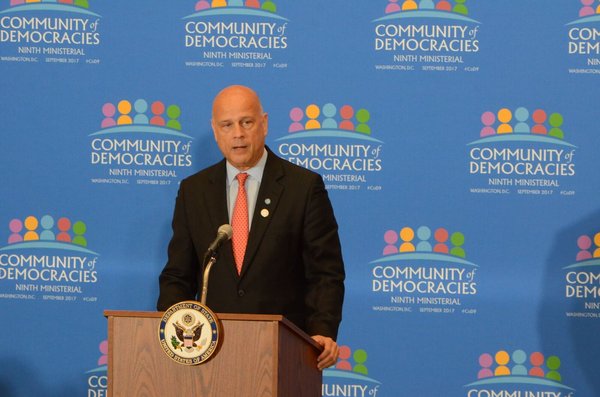 Mr. Thomas E. Garrett has been Secretary General of the Community of Democracies from September 2017.

Mr. Garrett brings more than three decades of experience in the field of politics and advocacy. Most recently, he supported reformers and democrats across the world with his work at the International Republican Institute (IRI), a nonprofit, nonpartisan organization that supports democracy, civil society, women and youth political empowerment and democratic governance in more than 80 countries.

Thomas E. Garrett joined IRI in 1994, first serving as a resident program director in Ukraine and overseeing democracy strengthening programs in Ukraine, Belarus and Moldova. He left the region in 2000 to serve as IRI’s resident advisor to Mongolia’s parliament and later moved to Indonesia to oversee a program of political party, public opinion research and support to local government. Returning to Washington, D.C., he was regional director for Middle East and North Africa and, in 2009, he was made vice president for programs, responsible for a global portfolio of over 200 staff in offices in 32 countries.

He holds a master’s degree in diplomacy and international relations and undergraduate degree in political science.