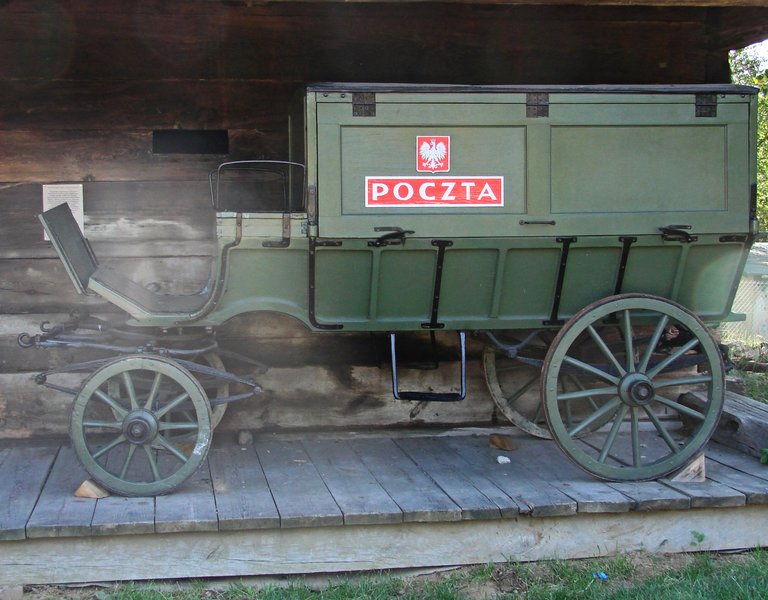 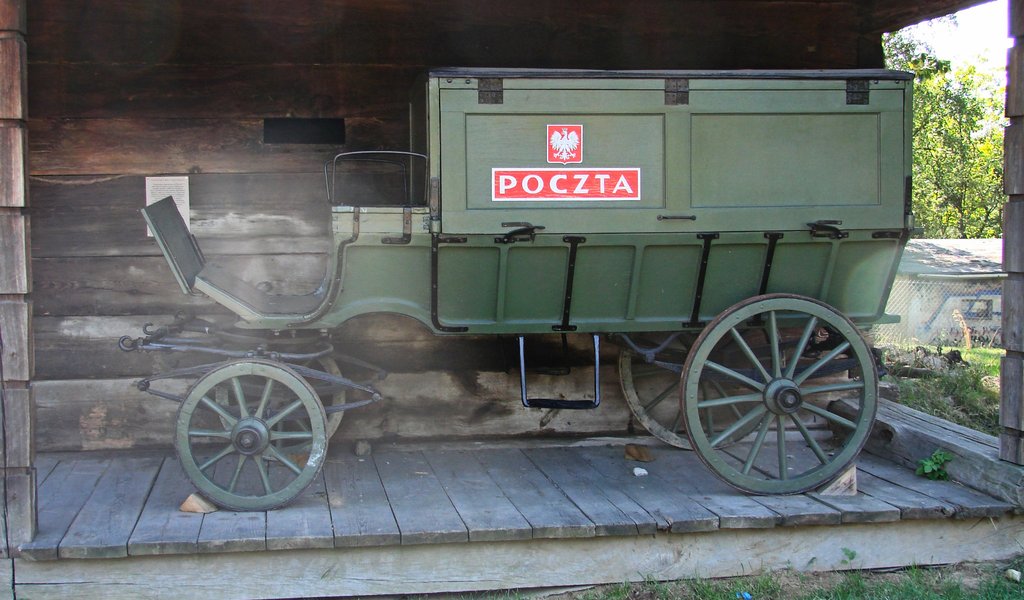 Although the history of the Polish Post dates back to 1558, the first Polish stamp appeared only in 1860. Due to the image of the eagle on the stamp, from the very beginning it gained the status of a symbol of patriotic values and independence.

This stamp (commonly called "Number 1") appeared in a difficult and painful time for Poles, when the nation was partitioned by foreign forces. The unique occasion of the unveiling of the stamp was related to the Polish Kingdom being allocated its own postal service, which was a result of the far-reaching efforts of Prince Aleksander Wielopolski who strived to restore the Kingdom’s automony.

The unknown designer of the stamp must have felt a heroic mission to "comfort hearts", because the image he created depicts a rebellious hybrid. This is because the official emblem of the Kingdom was a two-headed Russian eagle with a shield with a smaller, white Polish eagle.  Meanwhile, the “Number 1” stamp depicts just a white, two-headed eagle – without the symbol of the Russian empire. The process of gradual restoration of autonomy ended abruptly in 1865, with the crushing of the January Uprising. As a result, the issue of "Number 1" was also stopped. 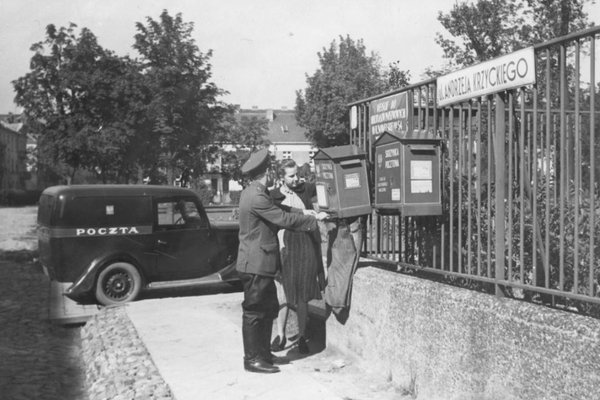 One hundred years later, a memorial stamp was printed in 1960 bearing the inscription "100 years of the Polish postage stamp", presenting a white two-headed eagle with a shield on which one can see a small white eagle with a slight visible contour. Norman Davies, the author of the book “To and From – Modern Poland: A Journey Through Postal History” states that this time the Russian inscription was missing as the censors had removed it. It was deemed best not to remind the Poles that, in principle, not much has changed since the printing of the prototype…

As a matter of interest, it is worth pointing out that sticking stamps in the upper right corner of the envelope is a relatively late invention. Previously, there was freedom in this area. Much like the "punching" of stamps, which was initially done by striking them through with a pen.

One could perhaps risk stating that the origins of the Polish Post lie to some degree in the greed of King Sigismund Augustus. A year after the death of his mother Bona Sforza, he began a diplomatic struggle to return the estate that she brought to Italy after 40 years of rule in Poland. The recovery of the so-called Neapolitan sums required constant correspondence with agents and lawyers in Naples, Rome, Vienna and Madrid, and therefore it was necessary to organize communications that would provide instant messaging, but also - and above all - protect against the capture of secret letters containing reports.

On October 18, 1558, Sigismund Augustus “established a permanent postal connection between Krakow and Venice through Vienna, by means of mail, that is to say, horses." In the document, Sigismund Augustus supports the initiative with the following words: “With an eye on the comfort of our subjects, so that both we and they are able to send letters and the like to Italy to take care of given issues.”

Prospero Provana was the first to manage the Post. An Italian attached to Polish nobility. In time, in addition to carrying out the tasks assigned to him by the king, Provana began to carry out assignments from nobles and wealthy merchants. And because he had a monopoly on consignments on the Krakow-Vienna-Venice route (and not only), business soon began to flourish.

And it is here that the demon of inter-company competition once again returns to the historical scene. Provana's success captured the attention of another big player in the postal service sector - the powerful de Taxis family (Franz von Taxis was the founder of the first post office in Europe in the sixteenth century), which had the strong support of Emperor Ferdinand Habsburg himself – a House actually despised by Bona, which de facto killed her. The de Taxis family finally drove out Provana from a lucrative business and after a few years of intrigue, their agent, Krzysztof de Taxis, also took over the Polish postal service connections. How he managed to persuade King Sigismund Augustus into putting the Post under imperial control, is a subject for another article. Suffice it to say that Provana, after five years of management, was ultimately the holder of royal property and salt mines close to Krakow.

Krzysztof de Taxis assumed power on July 11, 1562 and from that day it became the Polish Post, because the name was given to this institution by the king. The joy of the House of Taxis did not last long, because they failed to honour their commitments, two years later the king took away the privilege of managing Polish consignments and granted him to another Italian, Piotr Maffon, and then to Sebastian Montelupi (1569). Throughout this time the headquarters of the Polish Post was in Krakow.

Successive centuries saw the constant development and reorganization of the Polish Post. It gained particular importance in the days of Stanisław Augustus when it became the best organized institution of its kind in Europe. It functioned smoothly, new connections were introduced, carrying both official and private batches. The vigorous development of the Polish Post was interrupted for decades by the failed Kosciuszko Uprising and the third partition of Poland, after which the institution was in the hands of the three invaders. 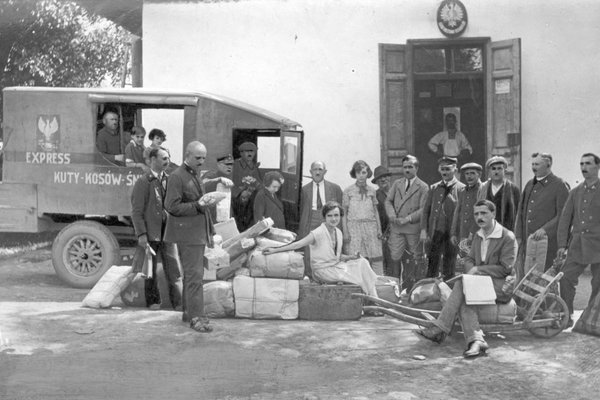 Even after the abolition of the autonomy of the Kingdom of Poland as a result of the crushing of the January Uprising, Polish postal works continued to play an active part in the struggle against the invaders. Right under the eyes of the invading forces and agents, secret expedition cells were created, where consignments were prepared for conspirators. According to the Polish Post website, parcels for conspirators were cleverly disguised. Encrypted addresses were also frequently used. The latter could only be read by so-called Gallopeni, or special couriers. In order to protect insurgent correspondence from confiscation, the premises of the cells were changed on a regular basis. There were also auxiliary offices, most often located in shops and shopping malls. The revival of the Polish Post took place after the regaining of independence in 1918.

Behind the scenes of the postal service

Few know that the Post functioning in Polish lands even had its own periodical. Initially it was titled "Post Review: an independent organ of Imperial-Royal Adjuncters, Offices and Postal Aspirants” published in 1910-1914. The Jagiellonian Library has five copies from that period. When Polish regained independence the monthly publication was given the title "Post Review: the organ of the Union of Postal, Telegram and Tel. Officials of the Republic of Poland" and appeared in the independence years between 1928-1930.

If one looks really like hard, one can find real gems in the press published during that time. In one of the editions published in 1910 there appeared the following announcement: "An official from a larger town in Western Galicia seeks to marry a young, pretty daughter of a postmaster. Although a modest dowry is required, discretion is assured, an exchange of photographs is possible. Announcement in “Post Review” for W.K”. In turn, in the "New Postman" of 1927, we find a situation in which from today's perspective the moral judgement can be regarded as unambiguous: "At one meeting of the postal workers in Krakow, convened in December last year to defend Director Niwicki against the attacks of "several little bastards", the chairman the Second Circle P. Maciewicz took the stand and argued eloquently that flirting between a superior and subordinate clerks taking place by mutual consent, can not constitute any misdemeanour or be regarded against the rules, because erotic lust, especially in physically healthy and sexually well-developed men, are sometimes so strong that their subconsciousness transcends the limits of free will. Anyway, as long as this happens with the permission of the clerk, no one is harmed and no damage is done.”

AGNIESZKA KAMIŃSKA, an assistant professor at SWPS University and a TVP Historia editor.