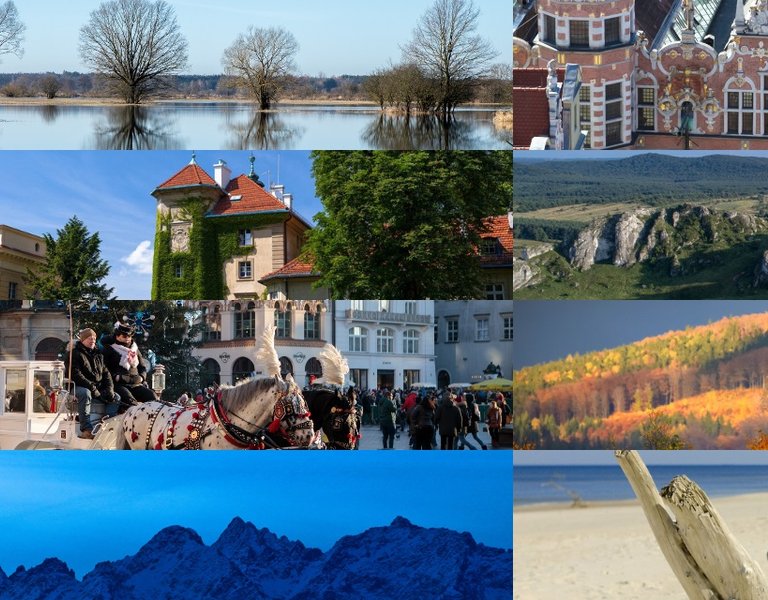 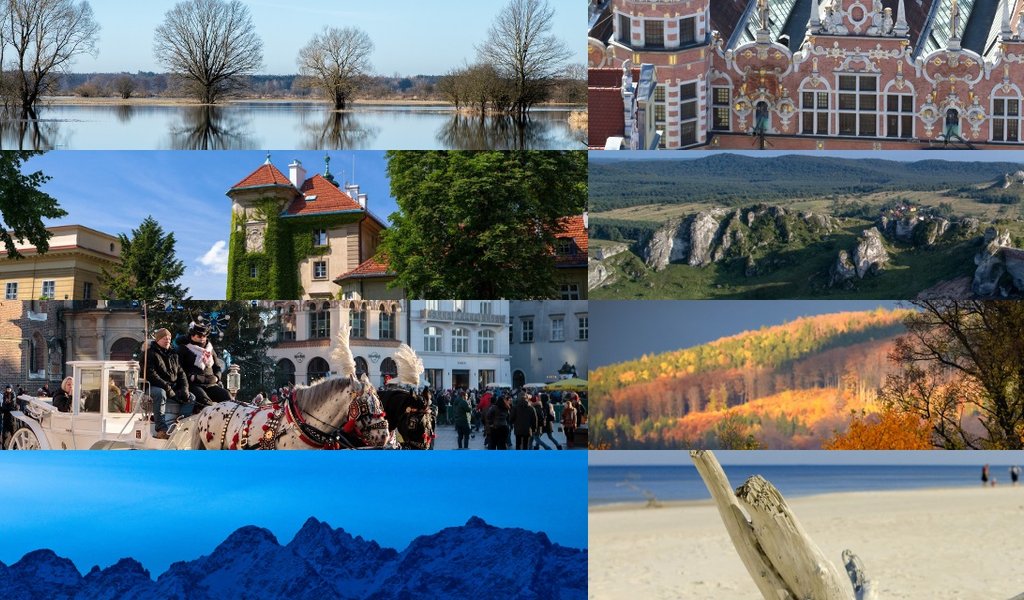 The Tatra Mountains is the highest mountain range in the Carpathian Mountains, located in southern Poland, in the Małopolska Province. These unique area was listed as UNESCO biosphere reserves in 1993. Its Alpine character and rich landscape each year attract a record number of tourists – between 2.5 and 3 million. The Park is a natural habitat of endemic animal species, such as the Tatra chamois, marmot, bear, lynx, wildcat and wolf.

Jakuszyce is the highest-located part of Szklarska Poręba. A unique micro-climate guarantees a thick layer of snow, even if elsewhere primroses are already in bloom. Jakuszyce is an ideal host for winter sports events. The most important is Bieg Piastów (Piast Race) which is the oldest and the biggest skiing event in Poland.

Bug is a major river mostly located in Eastern Europe, which flows through three countries with a total length of 774 kilometres. It is one of the last big European rivers with an unregulated, natural channel.

The wild Bug River Valley is a home for innumerable species of birds and other animals. They include hoopoes, lapwings, grebes, swans, eagle owls (some of the largest owls in the world), woodpeckers, sparrow hawks and buzzards. The most numerous mammal species include beavers and river otters, as well as badgers, deer and roe deer, elks, rarely encountered wolves and mud turtles threatened with extinction. Along the Bug River, a large number of protected landscape areas, landscape parks and nature reserves have been established.

The most picturesque section which lies entirely on the Polish side runs from Niemirów to Drohiczyn through the Landscape Park of the Bug River Gorge in Podlasie, which protects the meandering river with its islands, escarpments, sandbars, riverside meadows and willow as well as poplar riparian forests.

In the Bug River Valley, there is a large number of characteristic oxbows, so called “bużyska”, with their banks overgrown with bulrush and horsetail. At some places the river splinters and forks, flowing around islands with high sandy banks.

The Castle in Moszna is a historic castle and residence located in a small village of Moszna, in southwestern Poland. The history of this building begins in the 17th century, although much older cellars were found in the gardens during excavations carried out at the beginning of the 20th century. Some of the those could have been remnants of a presumed Templar stronghold. After World War II, further excavations discovered a medieval palisade.

Baroque, neo-Gothic, Neo-Renaissance… all in one! The Moszna Castle is one of the most beautiful castles in Poland. It contains 99 towers, the huge garden and it looks like the mysterious castle from Disney’s.

Zamość was founded in the 16th century by Chancellor Jan Zamoysky on the trade route linking western and northern Europe with the Black Sea. Built in the open country, Zamość was modelled on Italian theories of the 'ideal city' according to the plan of architect Bernando Morando, a native of Padua. It has retained its original layout, fortifications and a large number of buildings that combine Italian and central European architectural traditions.

Many people call Zamosc “a pearl of the Renaissance” – not only because the town is surrounded by bastion fortifications of the distinctly Renaissance type and tenements from that time account for the majority of buildings in Zamosc, but also because its cathedral ranks among the most outstanding accomplishments of late Renaissance architecture.

The Kraków-Częstochowa Upland, also known as the Polish Jurassic Highland or Polish Jura, is part of the JurassicSystem of south–central Poland. The Kraków-Częstochowa Jurassic Upland consists of a rich ecosystem, where completely opposite plants coexist in the same timeframe, partly because of the unique microclimate and also, because of the whole upland being surrounded by virgin forest. Apart from a diversity of plant and animal species, one can find a unique cultural landscape with archeological objects and relics of ancient inhabitation, with a vast collection of artifacts.

The Magura National Park is located in the south of Poland, in Island Beskids, at the border of the Podkarpackie and the Małopolskie Voivodeships. It covers a unique area between the Eastern and Western Carpathians, including the Magura Wątkowska massif. The area of the park is overgrown with thick woods, mostly beech and pinewoods.

The Kornuty nature reserve is located at the heart of the park, protecting the constellations of its fancifully sculpted sandstones. Their unusual shapes are due to erosion. The park also features a huge rock, called the Devil's Rock, in the town of Krzesławice. As the legend goes, the devil wanted to fling this rock at the nearby Cistercian monastery, but his strength failed him, and the rock fell several kilometres away from the monks' residence. The rock is believed to have indents made by five devil's fingers. A historical chapel and hermitage are located nearby; the latter until recently inhabited by a hermit from the monastery in Szczyrzyc.

Gdansk’s Main and Old Town is one of the largest complexes of monuments in Poland. Most architecture and art treasures located in this area date back to the Gothic, late Renaissance and Mannerist periods.

Gdańsk is also home to the National Museum, the Gdańsk Shakespeare Theatre, the Museum of the Second World War, Polish Baltic Philharmonic and the European Solidarity Centre.

Located in the middle part of the Polish Baltic Sea coast, in the Pomorskie Voivodeship, it protects the Łeba Spit and the Gardeńsko-Łebska Lowland. The spit has separated numerous coastal lakes from the open sea, including Łebsko, the third-largest lake in Poland (on which ship cruises are organised); Gardno, which is also quite big, and Jamno.

The park's pride is the largest stretch of moving sand dunes in Europe. The dunes, which move to the east by up to 10 metres each year, resemble a sandy desert stretching along the narrow split between the Baltic Sea and Lake Łebsko. They look really impressive, especially near their highest peak – Łączka, which is over 40 metres a.s.l. high.

In the Słowiński National Park, there are numerous peat bogs and swamps, which serve as mainstays for 260, mainly wetland, bird species. These include herons, cranes, ospreys and white-tailed eagles.

Located about 75 km south of the regional capital Wrocław, the picturesque Owl Mountains are a popular destination for hikers and day-trippers. At the foot of the range are well-known tourist places, like: Rzeczka, Walim at the Wielka Sowa massif, Sokolec, Jugów or Sierpnica.

The mountains are covered by a network of tourist trails, the most attractive of these, the red trail, leading through most of Europe. The favourite tourist destinations of the Owl Mountains include: the Stone Tower on Wielka Sowa and the viewing tower on Kalenica, Fort Srebrna Góra, Grodno Castle in Zagórze Śląskie, the adit complexes of Project Riese near Walim and the Mining Museum in Poland.

The Książ Castle is one of the largest castles in Europe, the third largest castle in Poland and the largest one in Lower Silesia. Visitors to Książ can wander around its beautiful terraces and listen to stories about Daisy von Pless, the beautiful yet unhappy owner of the Castle, who was given a six meter long string of pearls as a wedding gift from her husband.

Krakow's Main Market Square has been the site of a trading market for hundreds of years and is the center of holiday festivities. Poland's most famous Christmas market is set up here every December, and the lights and decorations make the center of Krakow even more beautiful.

On the first Thursday of December, the annual Krakow Christmas Creche competition begins in Main Market Square. The tradition dates back to the 19th century. It began as a portable puppet show with music and spoken lines that were written especially for this occasion. In time, amateur performers were replaced with mechanical figures. To this day, crèche figures symbolize historical and current events that took place in Krakow, Poland and around the world.